Exploring the pitfalls of measuring China's economy against Americas.

In the new Foreign Affairs White paper, the graph that seems to have attracted most attention is this one: 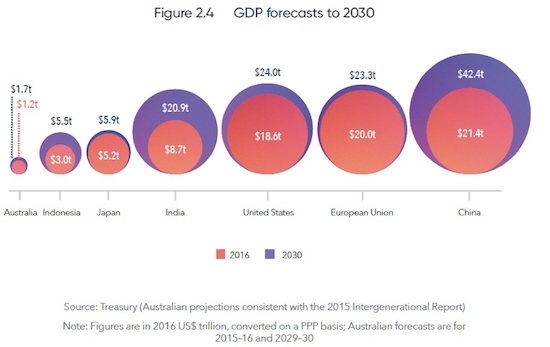 But before we make too much of this, read the footnote on page 24:

So is China’s GDP a lot smaller than America after all? As is often the case in economics, the answer is: ‘it depends’.

If we want to compare the size of different economies or add up different countries’ growth rates, we have to get the GDP figures into a common currency. The easy way is to use the market exchange rate as quoted on the news each night. But exchange rates reflect the supply/demand balance for exports, imports and capital flows. They don’t reflect the larger part of an economy which is not traded internationally.

Exchange rates are also quite volatile, reflecting swings of confidence, ephemeral news and market sentiment. Growth rates calculated using market exchange rates would be much more volatile than underlying GDP production. They would also misstate relative size of GDP, because prices tend to be much cheaper in developing and emerging economies. This is especially true of services such as haircuts or taxis (largely because the cost of labour is so much cheaper). A US dollar, exchanged for renminbi, buys a lot more in China than it does in America. Thus using market exchange rates to compare countries would understate what you can buy, and the size of GDP, in emerging economies such as China.

If GDP in the two countries comprised only Big Macs (and the hamburger was identical in both countries), using this PPP exchange rate to compare the two GDPs would give exactly the right answer. It would give an accurate measure of China’s total production against America’s, and over time would correctly reflect real growth rates (how many more Big Macs were produced) in the two countries.

In practice, of course, the two countries produce quite a different mix of goods and services. If the statistician tried to compare the price of a representative basket of American production with a representative basket of Chinese production, it would be comparison of beef and bread in America compared with rice and noodles in China. As well, how to allow for subtle (and not so subtle) quality differences? A train ticket in America will provide a different experience from one in China. Are the services provided by a doctor or a public servant the same in both countries? Where labour is cheap, lot more services (such as home-help) will be in the basket. The statistician has to wrestle with these problems, and the process is not tidy. There is inevitably a serious compromise between comparability (are they the same goods?) and representativeness (do they reflect the actual output of the individual country?).

Which method is used also makes a lot of difference to growth rates: the IMF’s World Economic Outlook is largely PPP-based, but market-exchange-rate growth rates are also shown (see WEO Table 1.1). This version of global growth is consistently much lower than the PPP figures show, because fast-growing countries such as China and India have a smaller weight in the market-exchange-rate growth calculations.

If you want to compare trade volumes or capital flows between countries, you should use market exchange rates. For most other purposes, PPP is better. But PPP comparisons come with many caveats and provisos. To start with, the figures are only as good as the basic GDP data that go in. This leaves plenty of room for disagreement (recall all the arguments about China’s perhaps-overstated GDP). The OECD provides some guidance on when PPP should and should not be used.

If the White Paper wants to make a general point about relative economic size, this is about as good as can be done. But care is needed in drawing conclusions. If the intention is to compare economic weight, GDP (a flow of goods and services produced) needs to be supplemented by a measure of the capital stock of a country (the accumulated assets that support its capacity), including intellectual assets. China’s physical capital stock is a small fraction of America’s.

Other issues might be grounds for greater dispute, such as the heroic assumptions that go into twenty-year-plus forecasts of growth rates. For example, do demographic differences justify giving India a higher growth rate than China?

If this wasn’t enough obsession with a simple graph, there is also a vexed issue of presentation. The graph from the White Paper asks the reader to visually compare different circles in order to understand relative size of economies. Does our eye compare the height of the circles (i.e. the diameter) or the area? To help us here (and to acknowledge the problem), the Paper gives us the actual numbers as well, so we know that we should be comparing the areas. But why not use the simple, clearer presentation of a bar graph? Bureaucrats interested in the graphical presentation of data should spend some time with Edward Tufte’s masterpiece, or even take a look at this timeless piece.