Beijing’s state-driven businesses have learned to adapt and adopt in the shadow of democratic openings and coups d’état. 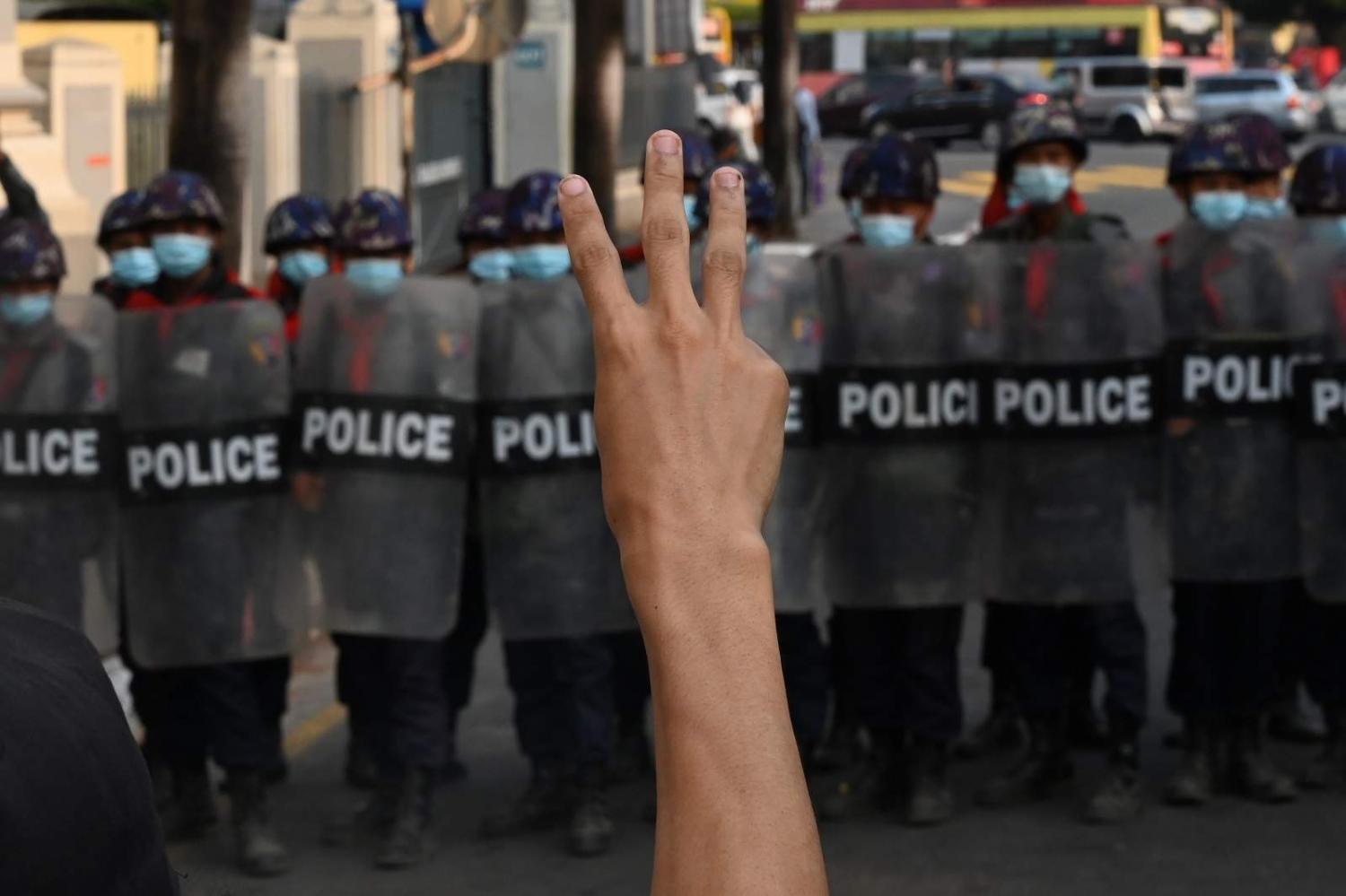 A year since the military coup in Myanmar, China continues to deal with the junta despite its widespread international rejection (Ye Aung Thu/AFP via Getty Images)
Published 16 Feb 2022     Follow @gongxuegxgx

As a resource-abundant country and a close neighbour, Myanmar has been a popular destination for Chinese investment. Although China has had a cosy time investing in Myanmar since 1988 when the military regime was internationally isolated, it is fair to argue that Chinese businesses in Myanmar faced extreme challenges, especially after the country’s democratic opening in the early 2010s.

Emboldened by the opening, Myanmarese rose to challenge several China-backed projects approved by the military regime, including the Myitsone dam, which was suspended in 2011. Since then, Beijing has learned many lessons from its business engagement in Myanmar. One is that projects supported by local institutions today might be challenged tomorrow. Most Chinese infrastructure projects are state-driven and thereby affect more than just the reputation of the companies undertaking them. When the local interactions of Chinese businesses go awry, Chinese overseas economic interests invariably pay a hefty price. To maintain these activites, it is imperative that Chinese companies balance good relations with both the ruling party and with the local society.

Domestically, the Chinese state has revamped its regulations on overseas investment to safeguard its image and protect its business interests. Beijing has been putting pressure on business actors to observe local laws, regulations and norms to maintain social license. Alongside their projects, Chinese actors have not only increased their corporate social responsibility activities, but also taken proactive measures to engage with local communities.

Chinese adaptations to the local community are now in question, particularly after the military junta came to power since the February 2021 coup.

During the democratic opening, Myanmarese societal actors became increasingly powerful and China paid greater attention to their demands, modifying existing Chinese strategies and behaviours to win support from local communities. At the Letpadaung copper mine, a project run by Chinese state-owned company Wanbao, the business model that once worked within the framework of Myanmar’s military junta had to be adjusted to meet local societal demands, including calls for part of the company’s profits to be invested in community development and social responsibility initiatives.

After Aung San Suu Kyi and the National League for Democracy (NLD) gained power in 2016, these societal actors were further supported by local governing institutions. Chinese businesses were forced to engage with the community, and in some circumstances to adopt strategies that were unconventional for Chinese companies overseas. Wanbao, for example, reached out to Myanmar community leaders and villagers, international media outlets such as The Economist, non-governmental organisations, and advisory firms for community engagement guidance and promotion of their activities.

It is clear that Chinese actors have made progress in gaining social license in Myanmar as the civilian government had the capacity and will to support societal demands. But Chinese adaptations to the local community are now in question, particularly after the military junta came to power since the February 2021 coup.

Since the coup, popular resentment has raised anxiety in China over its business interests in Myanmar. Political instability, ongoing protests and ethnic conflicts have not only threatened strategic China–Myanmar Economic Corridor (CMEC) projects in China’s Belt and Road Initiative (BRI), but also security along China’s borders. Any disruptions to the billion-dollar mega projects could bring about catastrophe for Chinese businesses.

The coup also broke China’s efforts to establish good relations with the NLD government and local society. Now China must again deal with the junta – a relationship that has gone through rough patches in the past few decades. Indeed, it was the civilian government that not only supported China’s BRI but also renewed talks on projects such as the China–Myanmar railway, scrapped by the military regime in 2014.

The past few decades of China’s deep involvement and interests in Myanmar’s political economy have forced Chinese companies to adapt to the reality on the ground.

As a result, Chinese businesses are trying to walk a fine line between Myanmar’s ruling Tatmadaw and the locals to maintain and protect their economic interests. Nonetheless, Beijing’s “non-interference” and attempt to block the United Nations Security Council sanctions against the junta have intensified anti-Chinese sentiment in local society, with which it had tried to improve relations over the past few years. In April last year, Myanmar protestors burnt 32 Chinese-backed factories while others threatened to attack the strategic Chinese oil and gas pipelines within the Myanmar border

In March 2021, China signed a statement condemning violence by the Myanmar military against the protestors. In May, a Chinese official in Myanmar contacted the Committee Representing Pyidaungsu Hluttaw, a legislative body in exile formed by ousted NLD members and supported by Myanmar local society. The official reiterated China’s wish to open a communication channel with the committee. But in the same month, the construction of a US$2.5 billion liquefied natural gas power plant as part of China’s BRI was approved by the military government, signalling the willingness of Beijing to continue cooperation with whoever is in power.

The past few decades of China’s deep involvement and interests in Myanmar’s political economy have forced Chinese companies to adapt to the reality on the ground. But if China continues to do business with the military government, it is likely that locals will take those actions as support for the military regime. Chinese investments face not only Myanmarese societal pushback but also international pressure. For instance, the US Department of Commerce has sanctioned Chinese company Wanbao and its entities for supporting Myanmar’s military regime.

In a Myanmar under full and repressive military government control, Chinese businesses may no longer have the incentive or the appetite to maintain a strong commitment to local Myanmar society. However, the reputation of China’s state-driven enterprises relies on handling the situation with extreme care.

The difference between how China sees the world and how the world sees China can lead to a seriously dizzying view.
Greta Nabbs-Keller 9 Jan 2020 10:30

Natuna Islands in the South China Sea has flared again, with Jakarta giving every indication it’s not for backing down.
Sam Bateman 16 Jan 2017 17:02

Tillerson’s suggestion does not help the US politically in the region.