The Security Council should not have a stranglehold on international justice, and all options should be on the table.

Last week the UN Security Council was briefed yet again on the situation in Myanmar.

This time the message was presented by the Secretary-General’s Special Envoy Christine Schraner Burgener. She talked, among other things, about the importance of accountability for Myanmar’s military, who, according to a report released last year by the Independent International Fact-Finding Mission on Myanmar, have committed crimes against humanity, war crimes, and possibly genocide against the Rohingya people.

The establishment of mechanisms to collect and preserve evidence – in the absence of any actual route from investigation to prosecution – does not facilitate prosecution.

The Fact-Finding Mission recommended the Security Council refer the situation to the International Criminal Court (ICC) or establish an international criminal tribunal. But due to the politics of the Security Council, in which any of the five permanent members may veto any proposed action, that recommendation will almost certainly never be acted upon. In the meantime, the Human Rights Council has done what it can by establishing a mechanism for the collection, preservation, and analysis of evidence, so as to facilitate prosecution in a currently non-existent court.

A bleak comparison can be drawn with North Korea. In 2014, a UN Commission of Inquiry released a major report which shone a spotlight into the crimes of a regime it described as unparalleled in the contemporary world. It recommended that the Security Council refer the situation to the ICC. But as with Myanmar, the recommendation hasn’t been acted upon. A repository has been established for the collection and preservation of evidence; but like Myanmar, there’s nowhere for the evidence to be sent.

States have a legal obligation to cooperate with each other to facilitate the prosecution of war crimes. The establishment of mechanisms to collect and preserve evidence – in the absence of any actual route from investigation to prosecution – does not facilitate prosecution. The message being sent to would-be perpetrators of genocide is that the prospect of being brought before an international criminal court or tribunal, while theoretically possible, need not be a real deterrent.

Security Council paralysis need not be the end of the accountability story in Myanmar. The Security Council has the primary responsibility for international peace and security, but the responsibility is not exclusive, and it’s well established in international law that the General Assembly has a secondary responsibility in the same domain. Indeed, the UN Charter bestows upon the General Assembly a broad power to consider and make recommendations on any matter at all within the scope of the Charter.

Exercising this power, the General Assembly has in the past recommended arms embargoes and sanctions, mandated a peacekeeping force, requested states to break off diplomatic relations with rogue states, facilitated the establishment of a hybrid criminal tribunal (Cambodia), and established an investigatory mechanism (Syria) – among other things.

There is no reason that it could not push the bar even further and establish an international criminal tribunal. It could do so by relying upon its inherent powers under the UN Charter (as it did when establishing the investigatory mechanism for Syria), or alternatively, it could rely on a resolution it passed in 1950 known as “Uniting for Peace”, in which it stated that if the Security Council failed to exercise its responsibility for international peace and security, the General Assembly would step in.

There are a few things that states interested in pursuing accountability in Myanmar could do to help make this happen.

First, those on the Security Council (the UK, France, the Dominican Republic, Belgium, Kuwait, for example) could put the matter of ICC referral to a vote. It would almost surely fail, but in doing so it would strengthen the case for General Assembly action.

Second, the Security Council could vote in favour of referring the situation to the General Assembly for action. This would be a procedural vote, so not subject to the veto. A vote by the Security Council referring the situation to the General Assembly on the basis that the Council itself had failed would provide a strong impetus for General Assembly action. And with several Council members having expressed a desire to see something done on Myanmar, it’s not out of the question that it might pass.

And third, the General Assembly and/or the Human Rights Council could pass a resolution urging the Security Council to refer the situation to the ICC, and noting that if it doesn’t, the General Assembly could consider next steps. It’s unlikely to spur the Security Council into action, but it would be another thing paving the way for action by the Assembly.

Aside from the General Assembly, there’s one other actor that has a potentially transformative role to play in pursuing accountability for the Rohingya, and that’s ASEAN. The ASEAN Regional Forum (ARF) describes itself as a “central pillar” in the region’s security architecture. Its vision is to develop preventive diplomacy capabilities, to make the ARF an “action-oriented mechanism that develops concrete and effective responses” to regional challenges, and to maintain “comprehensive approaches to regional security issues”.

ASEAN has not said anything much about accountability for the perpetrators of atrocities in Myanmar, other than expressing support for national mechanisms that were dismissed by the Fact-Finding Mission. Could ASEAN establish a regional criminal tribunal? It would be a giant leap for a group of states committed to moving “at a pace comfortable for all”, but might be more palatable for Myanmar than any international alternative.

The point is that the Security Council is not the only game in town. It should not have a stranglehold on international justice, and all options should be on the table. 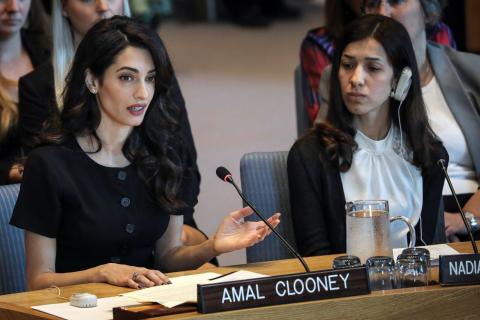 Bangladesh has used a national icon to signal a fresh appetite for improved ties with Pakistan – just as China looms.
Geoff Kitney 16 Mar 2017 13:35

There are some ideas in politics that turn a lot of laps before they find favour. Few have done the distance that a super national security department has.
Grant Newsham 1 Jun 2018 13:00

Has the PLA really overlooked its amphibious force?

Taiwan would be well advised to improve its defences and make itself a tough nut to crack.