In late October 2018, the Taliban in Afghanistan launched a new campaign of attacks, taking them into areas which until then had been “peaceful”. The attacks started in the Khas Uruzgan district, part of the very province where Australian defence personnel served as part of their lengthy deployment in Afghanistan.

In the first week of November, the Taliban extended the campaign into the Jaghori and Malestan, districts of the neighbouring province of Ghazni.

The UN Office for Coordination of Humanitarian Affairs issued a statement on the situation:

Anecdotal reports indicate violations of International Humanitarian Law, with private houses burnt and civilian vehicles stolen or confiscated. Roads connecting Jaghuri and Malistan to Ghazni city have reportedly been blocked, preventing safe passage for civilians attempting to leave the area, and leaving people in siege-like conditions with no access to health facilities and limited availability food, fuel, and medicine.

The same report noted that 15 civilians were killed in a single clash in Malistan on 11 November and the Afghanistan Independent Human Rights Commission released a report saying the attacks on Khas Uruzgan led to 63 deaths.

A local media broadcast reported that the Taliban had killed 31 civilians in the Khas Uruzgan villages and that many were shot to death at close range in front of their homes. Many were killed after they were captured attempting to flee to Bamyan, Ghazni, and Kabul. A member of a delegation tasked by president Ghani to assess the situation claimed 60% of the population in Khas Uruzgan and Ghazni have been forced to flee their homes.

The attacks work well for forces seeking to demonstrate the inability of the state to perform its central function of protecting its people.

The overwhelming majority of residents of Jaghori and Malestan are members of the Hazara ethnic group. Hazaras are predominantly Shiia and constitute a religious minority among the country’s majority Sunni population. Historically, Hazaras were subjected to discrimination and exclusion by the country’s Pashtun and Sunni governments.

The Hazara ethnic group has also been persecuted by the Taliban. The Taliban committed a series of atrocities against the Hazaras from 1996 to 2001. In August 1998, when the movement took control of the city of Mazar-e Sharif, it engaged in a brutal campaign and executed hundreds of Hazara civilians.

The exact trigger for the renewed attacks remains unclear. One suggestion is that local elders, long harassed into providing “protection money” to the Taliban, finally baulked at what was being demanded. But other factors and deeper forces were almost certainly at play. The assassination on 18 October 2018 of the Kandahar police chief, General Razaq, almost certainly created a heightened disposition on the part of the Taliban to hit other potential targets while the security environment was unstable.

The attacks work well for forces seeking to demonstrate the inability of the state to perform its central function of protecting its people. And while it is simplistic and misleading to characterise what has happened in these districts as local “ethnic” clashes, there is no doubt that the Taliban, dominated by Sunni Muslims from the Pashtun ethnic group, are likely to prefer to target those Afghans who are least “like them”.

Shiite Hazaras fall squarely into the category of those most vulnerable to attack in this kind of situation. The Hazaras of Khas Uruzgan, Malestan, and Jaghori had long been living on borrowed time.

Regardless of the exact Taliban objectives, these attacks have the potential to aggravate political and security conditions.

With nearly half of Afghanistan contested or controlled by the Taliban, the fall of a district to insurgents is hardly surprising. However, attacks by the Pashtun and Sunni militant group on Hazara districts are poised to escalate the ethnic and sectarian dimensions of the conflict.

Furthermore, with nearly universal female school attendance in these districts, the cost of capitulation by these communities to the Taliban’s limitations on women and other social freedoms are particularly high. For example, more than 50,000 students, including 23,988 girls, attend 105 schools in Jaghori alone.

A very important lesson which flows from the October-November 2018 attacks is that no part of Afghanistan can be considered safe. For years, the situation in Afghanistan has been quite extraordinarily fluid.

In stable societies, a robust framework of institutions typically exists to ensure order and to offer protections to citizens. What distinguishes war-torn societies from stable ones is not that conflict is endemic, but rather that institutional structures for the prevention of conflict are feeble or non-existent, meaning that what seems a safe place one day can turn into a battleground the next.

This is the situation in which Afghanistan finds itself.

The neo-patrimonial state that developed under President Hamid Karzai and persists under President Ashraf Ghani has proved incapable of offering effective protection for vulnerable populations. The international community, too, has been ineffective in confronting the problem of “sanctuaries” in Pakistan from which the Taliban operate with impunity. The Hazaras in Khas Uruzgan, Jaghori, and Malestan found themselves fatally exposed once the Taliban concluded that the time was opportune to move against them.

All this may seem a long way from Australia. But that is not actually the case. The vast majority of asylum seekers from Afghanistan who have sought protection in Australia in the last two decades have been of Hazara background, and many have come from the very districts now under attack.

So far, there has been an inclination among decision-makers who process asylum claims to treat areas such as Jaghori as safe. This view, always somewhat naïve, is now completely unsustainable. It would be an act of common decency for the government to put a moratorium on all removals of Hazaras to Afghanistan. 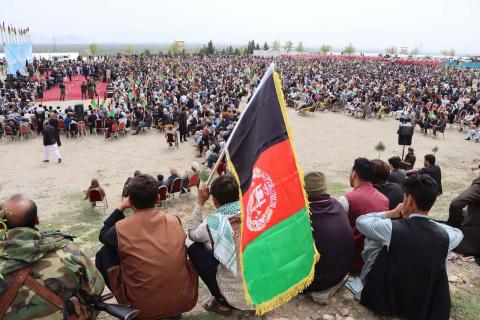