The introduction of a so-called “civics” tests for investigators appear to be a thinly disguised attack on human rights. 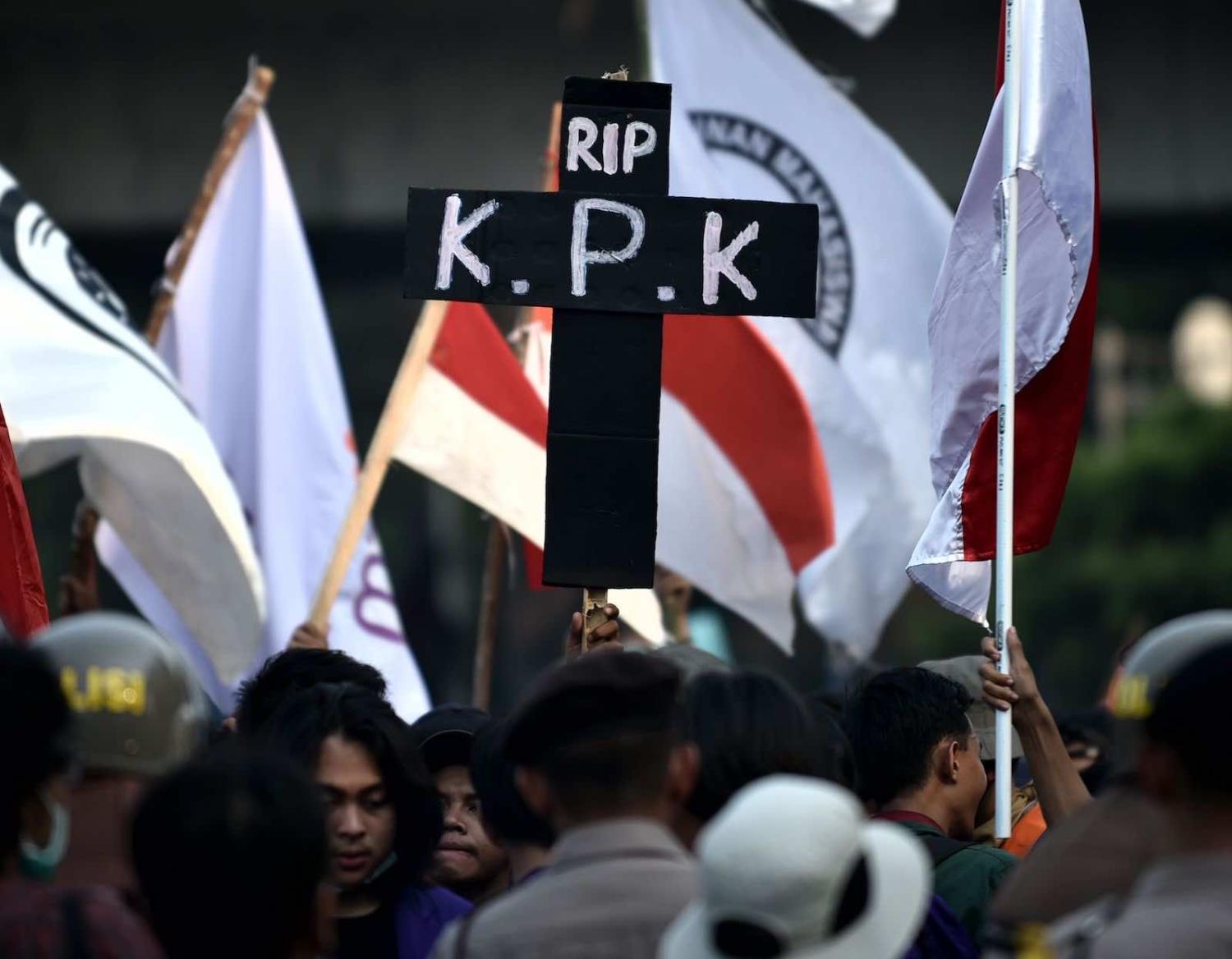 Demonstrations against proposed legislative changes in 2019 to anti-corruption laws: the latest concern focuses on a so-called “civics” test for staff at the Corruption Eradication Commission, or KPK (Bay Ismoyo/AFP via Getty Images)
Published 29 Jun 2021     Follow @amnestyIndo

Ask any Indonesian about their country’s most pressing problem and more likely than not the answers you’ll get are “the economy” and “corruption”.

This is with good reason. Indonesia ranks 102 of 179 on Transparency International’s 2020 Corruption Perception Index, falling over four years from a previous ranking of 90, underscoring the problem with widespread graft. Corruption among judges, prosecutors and senior police officers has undermined the right to equal protection under the law. Rampant bribery in the business licensing process for the mining and plantation industries has enabled the seizure of land from indigenous communities, while also threatening action on climate change. Embezzlement of government funds earmarked for access to public services, including social safety nets during the pandemic, has particularly cost low-income and marginalised citizens.

All this has coincided with persistent efforts to weaken Indonesia’s otherwise well-regarded Corruption Eradication Commission (KPK), which has exposed many high-profile corruption cases since its founding in 2003. The KPK has consistently ranked among the most trusted and popular state institutions in the country.

President Joko Widodo campaigned on anti-corruption during his first presidential bid in 2014. Yet once in office, Jokowi, as the president is widely known, has focused more on economic growth and development than on the KPK and its work. But some in the political elite, where the KPK is deeply unpopular due to its record of investigations, have sought to undermine the commission.

In 2019, the House of Representatives managed to pass a controversial revision to the KPK’s founding statute – a measure that the legislative body first introduced in 2010 but repeatedly failed to push through due to public backlash. The new law was passed in an uncharacteristically rushed process spanning fewer than two weeks, bypassing standard legislative procedures such as including the bill in the House’s priority legislation list (Prolegnas). Many of the deliberations on the bill were not open to the public.

This clearly contravenes Article 25 of the International Covenant on Civil and Political Rights (ICCPR), ratified by Indonesia in 2005, which guarantees the people the right “to take part in the conduct of public affairs, directly or through freely chosen representatives”.

One of the new law’s most criticised clauses was Article 1, which now requires all KPK employees to be civil servants, when they were previously independent workers. Experts and activists warned  that such a requirement has the potential to impair KPK’s independence, making it much less effective in investigating government officials and other politicians. Few, however, could have foreseen how the article has resulted in a serious undermining of the fight against corruption.

In March this year, Article 1 was used as the basis to mandate that KPK employees take a “civics” test as part of their change of status to civil servants. The test, however, had evidently little to do with civics, and even less to do with the employees’ competence as antigraft officials. Multiple employees have said that the written exams and oral interviews that were part of the testing process included questions about their personal, political (“Should democracy and religion be separated?”) and religious beliefs (“Would you be willing to take off your hijab?”), as well as their lifestyle choices (“What do you do when you go out with your boyfriend?”).

On 25 May, KPK deputy chairman Alexander Marwata announced that 24 of the 75 employees that had failed the so-called civics test would be given further training before being appointed as civil servants. The remaining 51 would be fired, with Alexander claiming that they had done so badly on the test that they could not be retrained.

As the pandemic drags on and social aid programs expand, aimed at fulfilling Indonesians’ rights to an adequate standard of living, the potential for embezzlement and misappropriation of government funds also increases.

These supposedly uncivic-minded employees include some of the KPK’s most high-profile and decorated personnel. The dismissed employees have since reported the testing process and the resulting firings to Indonesia’s National Commission on Human Rights (Komnas HAM), arguing the process violated their rights to freedom of thought, belief and religion under Indonesian law as well as international human rights standards.

Beyond the impact on these individuals – who may suffer a stigma for being fired – the broader consequences of undermining the KPK will be felt by the 270 million Indonesians living under a system that is mired in corruption.

The infamous e-ID card graft scandal, for instance, showed how brazenly the country’s top legislators embezzled funds from a program whose bungled implementation resulted in months-long waits for many e-ID applicants – which far from a mere inconvenience, obstructed access to essential public services to obtain social security and public healthcare, as well as other civil rights including participation in elections.

The recent Covid-19 relief corruption claims, which resulted in the arrest of then-social affairs minister Juliari Batubara in December, provides an example of how alleged corruption in Indonesia can lead to violations of economic and social rights, and the important role that the KPK plays in addressing such concerns. Juliari was alleged to have received up to Rp 32 billion (A$3 million) in bribes from a number of companies that supplied the components of social aid packages – which include food, soap and other basic household necessities – that were distributed in 2020 during the first wave of the pandemic.

According to local non-government organisation Indonesia Corruption Watch, state losses from corruption reached Rp 56.7 trillion in 2020, over four times the amount of state losses in 2019. That is more than each of the budgets for the state health insurance program (Rp 48.8 trillion), monthly Covid-19 stimulus cheques for low-income workers (Rp 37.9 trillion), and government food aid (Rp 47.2 trillion).

As the pandemic drags on and social aid programs expand, aimed at fulfilling Indonesians’ rights to an adequate standard of living, the potential for embezzlement and misappropriation of government funds also increases. Without a strong and independent KPK, staffed by its best people, the risk is even greater.

After lurching from crisis to crisis, the two countries can forge a shared interest in keeping a steady relationship.
Olivia Tasevski 17 Feb 2022 14:30

Environmental damage and gendered violence are flashpoints on the tiny island dominated by US troops.
Bradley Wood 8 Apr 2020 10:00