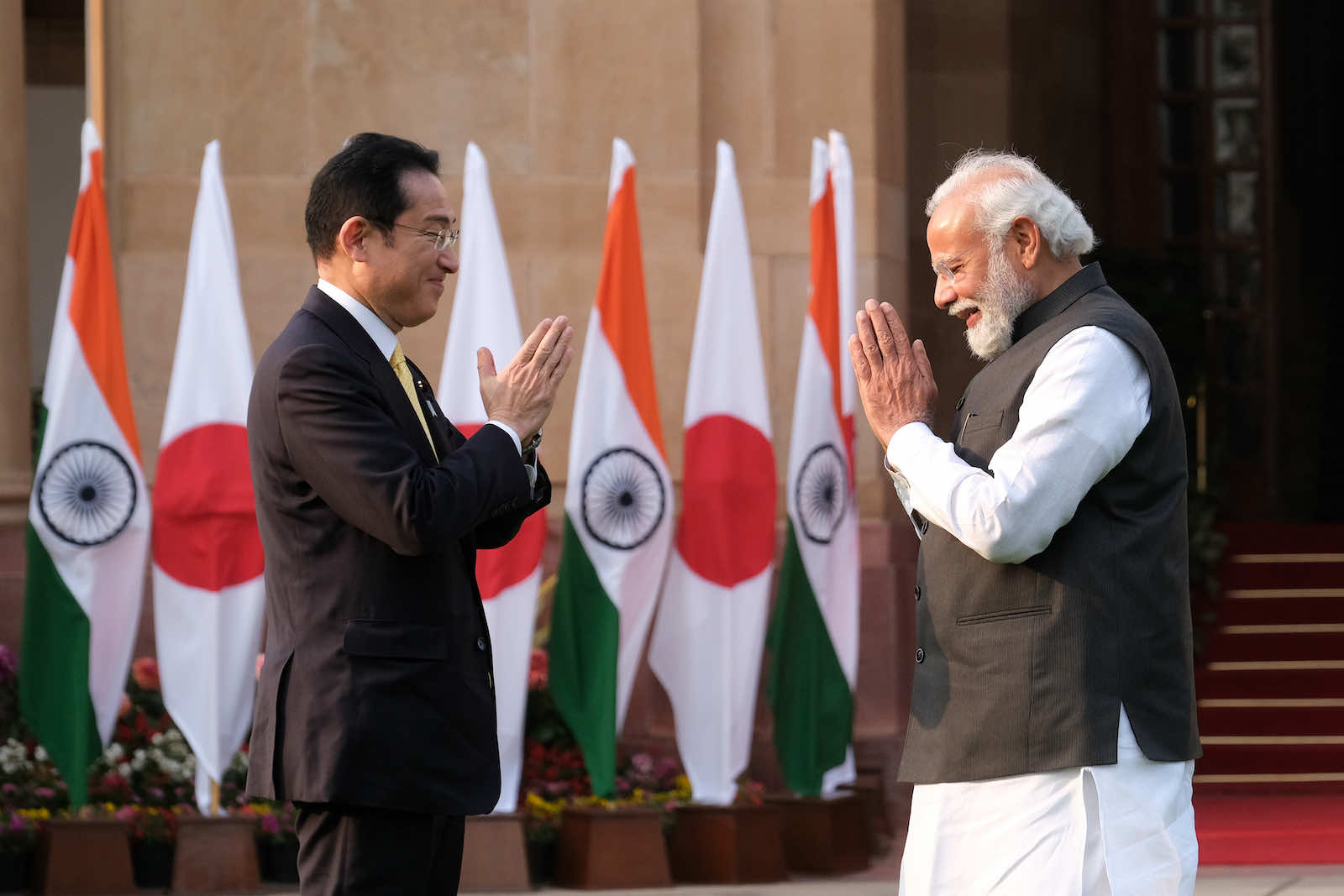 Japan’s Prime Minister Kishida Fumio visited India last month ahead of a G7 summit. With India hesitant to criticise Russia’s invasion of Ukraine, Japanese media speculated Kishida’s visit was aimed at persuading fellow Quad leader Narendra Modi to change India’s position. The US frustration about India’s attitude towards the conflict has been obvious. The recent Quad summit readout after the leaders’ virtual meeting failed to show a sense of urgency regarding Ukraine while, instead, the common position for the Quad grouping remains concern about China. India’s abstention at the UN Security Council on 25 February in what was ultimately a vetoed attempt to censure Russia also saw a backlash against India.

However, the main objective of Kishida’s visit was not to highlight India’s sensitivity over Russia, which remains a key defence and energy partner, but to reaffirm the significance of the Japan-India “Special Strategic and Global Partnership”. Publicly, at least, the Kishida administration has decided to express Japan’s strong condemnation of Russia but not demand India follow suit. Japanese diplomats carefully designed the visit to India to showcase the common ground between the two countries; condemning unilateral actions to change the status quo with a focus on the Indo-Pacific.

This approach did bring about a rhetorical change for India. Compared to the Quad readout, the Japan-India statement slightly strengthened the language about Ukraine, noting the two leaders shared “serious concern about the ongoing conflict and humanitarian crisis in Ukraine” and called for “an immediate cessation of violence”. The two also underscored the importance of safety and security of nuclear facilities in Ukraine. All this went beyond the statement made in the Quad’s leaders’ statement.

Tokyo should continue to express its clear position against Russia while encouraging, not intervening in, India’s internal discussions about its relations with Russia.

Kishida’s visit was an opportunity for India to make a breakthrough in its current predicament of desiring closer ties with its Quad partners, yet not to discard relations with Russia. For India, China is the urgent security concern, especially after the stand-off in June 2020, even as China’s Foreign Minister Wang Yi aims to play down the issue before the BRICS summit. A year ago, the conduct of the US withdrawal from Afghanistan and the lightning takeover by the Taliban shocked India as it gave China or Pakistan increased space to manoeuvre. On top of this, Modi had promoted cooperation with Russia, especially around Covid-19 vaccines, and later established a 2+2 meeting between Indian and Russian foreign and defence ministers in December 2021.

The reality is that India cannot stand alone against China. As of 2020, China’s nominal GDP was more than five times as large as India’s, and its military budget is almost threefold. India needs weapons; it relies on the United States for 27 per cent of its supplies, on the European nations for 38 per cent, but also on Russia for 25 per cent. And Russian-supplied hardware comprises crucial assets, including fighters and missile defence systems.

Japan clearly does not wish to lose India’s support in the Indo-Pacific theatre by forcing it to radically change ties with Russia. Still, Japan has further opportunities to advance its relations with India, particularly around weapons. While Japan slightly amended the operational guidelines of the principles of defence equipment transfer in order to provide non-lethal equipment to Ukraine, the self-restrictive policy still prohibits the transfer of lethal weapons, as well as any transfer to a country involved in military conflict. An early idea of Japan transferring amphibious aircraft to India lost momentum after 2018, but there are other areas where cooperation could be feasible, such as in jointly developing unmanned ground vehicles and robotics.

Military-to-military cooperation between the countries could also be enhanced, building on previous success, most recently through the Malabar exercises and Dharma Guardian drills in 2021. Reported plans for the Indian Air Force to dispatch a unit of Russian-made Sukhoi Su-30 fighter aircraft to Japan for training, pitting them against JASDF F-15 Eagle fighters, would also give Japanese pilots a far better understanding of the capabilities of Su-30MK2 fighters that China also employs. Table-top exercises should also be considered regarding high-end military contingencies, such as involving a confrontation in the Taiwan Strait, South and East China Seas, Korean Peninsula or along the Line of Actual Control.

But Tokyo and New Delhi should also be careful of public pronouncements about the priority given to the Indo-Pacific so as not to put European nations offside at a time of hot war, risking being seen as selfish and leading European nations in turn to also lower their priority in the Indo-Pacific. Navies from France, Germany and the United Kingdom have become more active in Indo-Pacific waters in recent times, and this should be encouraged. And as Ukraine’s President Volodymyr Zelensky declared in a speech to the Australian parliament last week, “whatever is happening in our region … [can] become a real threat to your country and your people as well. Because this is the nature of the evil – it can instantly cross any distance and barriers, destroy lives.”

Therefore Tokyo should continue to express its clear position against Russia while encouraging, not intervening in, India’s internal discussions about its relations with Russia. Japan, together with the United States and Australia, needs to formulate a plan that would substitute India’s reliance on Russia by providing a tangible and feasible alternative. That requires Japan taking on a bigger share of the responsibility, coupled with its own further domestic reforms, especially the transfer of lethal military equipment.