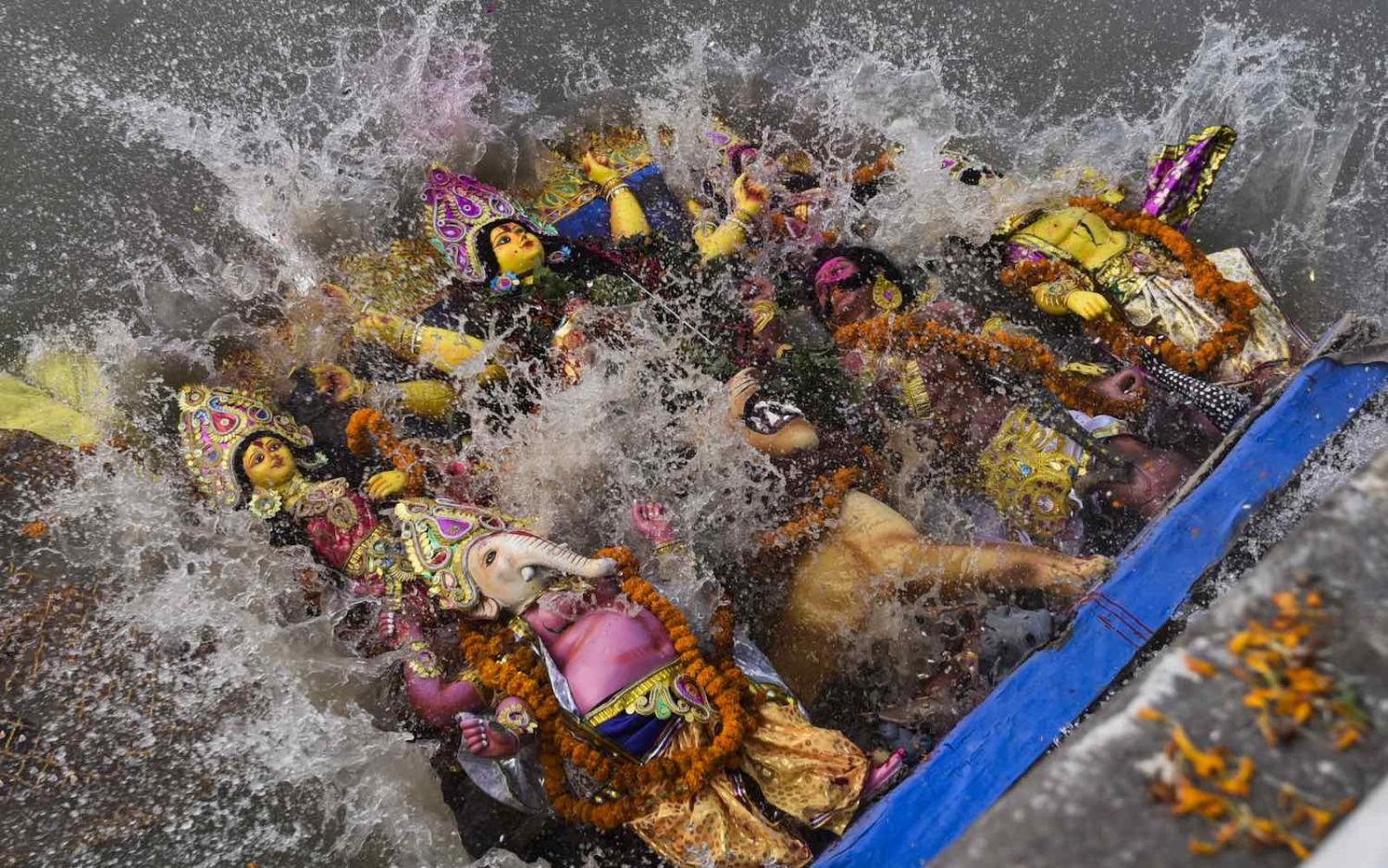 An idol of Goddess Durga immersed in the Brahmaputra River at the end of the Durga Puja festival in Guwahati, Assam, India, October 2018 (David Talukdar/NurPhoto via Getty Images)
Published 23 Jul 2020     Follow @urvitembey

The Tibetan plateau is often called the “Third Pole”, owing to its glacial expanses and vast reserves of freshwater. For as many as nine countries in the surrounding region, the status of rivers emerging from the plateau is a key concern.

China has claimed express ownership over Tibet’s waters, making it an upstream controller of seven of South Asia’s mightiest rivers – the Indus, Ganges, Brahmaputra, Irrawaddy, Salween, Yangtze and Mekong. These rivers flow into Pakistan, India, Bangladesh, Myanmar, Laos and Vietnam, and form the largest river run-off from any single location. It is estimated that 718 billion cubic meters of surface water flows out of the Tibetan plateau and the Chinese-administered regions of Xinjiang and Inner Mongolia to neighbouring countries each year.

Nearly half that water, 48%, runs directly into India.

For India, the one domain in which China’s status as the “upper riparian” provides an almost insurmountable challenge is in ensuring shared access to transboundary rivers. And as the recent clashes on the Sino-Indian border have made clear, India needs to assess how China might “weaponise” its advantage over those countries downstream. Control over these rivers effectively gives China a chokehold on India’s economy.

China could exploit these rivers in three ways.

First, it can “blockade or divert” them. China’s large-scale infrastructure projects such as the South-North Water Diversion Project and West-East Power Transfer Project already threaten to do so. In addition, to meet its irrigation and power needs, as per the Five-Year Plan 2011–15, the Chinese government planned to build 120 gigawatts of new hydropower plants on the Salween, the Upper Mekong, Upper Yangtze and the Brahmaputra – “more than one new Three Gorges Dam every year for the next five years, and … more than any other country has built in its entire history”.

Even in Pakistan-Occupied Kashmir, China has promised to finance and build five dams that will form the North Indus River Cascade. Not only will these dams negatively affect the flow of water to lower riparian states, including India and Pakistan, especially in non-monsoon months, but they will also stop the flow of silt which supports agriculture downstream.

China is also building five dams on the Brahmaputra river, and it is feared that “directional blasting techniques could be used to divert the Brahmaputra north to China at the u-bend” before it enters India through the state of Arunachal Pradesh. China has already blocked the flow of the Xiabuqu river, one of Brahmaputra’s Tibetan tributaries, for the Lalho hydel project. More recently, in the aftermath of border clashes between India and China in the Galwan Valley from May, China blocked the flow of the Galwan River, a tributary of the Indus which originates in Chinese-controlled Aksai Chin area, thus altering the natural course of the river to prevent it from entering India.

Absent a mutually agreed dispute-settlement mechanism on water sharing, and with China’s public refusal to submit to international dispute settlement, there are few diplomatic solutions available to India.

Second, China could sabotage transboundary rivers by polluting them, rendering them unfit for use. The Siang river, which joins the Lohit and the Dibang downstream to form the Brahmaputra, turned muddy and “blackened” in 2017 raising concerns about China’s upstream activities. The water became unfit for human consumption, with “up to ten inches of sediment accumulated on some stretches of the riverbed”.

This episode severely affected agriculture production in the Siang valley, known as one of the rice bowls of the Indian state of Arunachal Pradesh, and it also had a detrimental impact on fishing communities. Although China stated that an earthquake in November 2017 might have been the cause, the river waters reportedly changed before the quake struck.

Third, China has access to valuable data that can help manage floods and fluctuations downstream. India and China have signed two pacts since 2008 on data sharing for the Sutlej and Brahmaputra in order to better manage the shared watercourses. While these agreements have had a positive effect on water management, and helped pre-empt and control flooding, this dependence can also be exploited by withholding hydrological data accessible only to the upper riparian state.

After the 73-day Doklam standoff between India and China in 2017, for instance, there were reports that China withheld hydrological data for the Brahmaputra and Sutlej rivers – in contravention of the agreement – resulting in floods in Assam and Uttar Pradesh states. This wasn’t the first time that shared waterways in the area had raised alarm. Worryingly, in 2004, a lake began to form on the Parechu river, a tributary of the Sutlej which originates in the Tibetan Himalayas, threatening to cause floods lower down in India’s Sutlej valley. While China remained cooperative and shared upstream data in advance with India at the time, there was speculation (after China rejected a request by India to send scientists and engineers to the site) that China deliberately created a “a liquid bomb”, an artificial lake unleashed at will to potentially devastate downstream areas. Such concerns of China possibly breaching and weaponising the waters of this Parechu lake were raised in June 2020, when a rise of 12 to 14 metres was observed in the river.

Absent a mutually agreed dispute-settlement mechanism on water sharing for the transboundary rivers, and with China’s public refusal to submit to international dispute settlement, there are few diplomatic solutions available to India. Effective management of domestic rivers and rainwater remains the primary recourse.

Such an alliance could collectively impose economic sanctions for any upstream violations. If co-operation and equitable use of shared water resources are to remain the objective, India and other countries in South and Southeast Asia will have to learn to bargain collectively with China.

The seafood you bought from your local market could have been caught by a slave.
Jeffrey Robertson 23 Mar 2021 06:00

When a middle power is not caught in the middle

Different understandings of the world where a middle power sits has led South Korea down a different path to Australia.
Weixiang Wang, Oana Burcu 11 Jun 2020 05:00