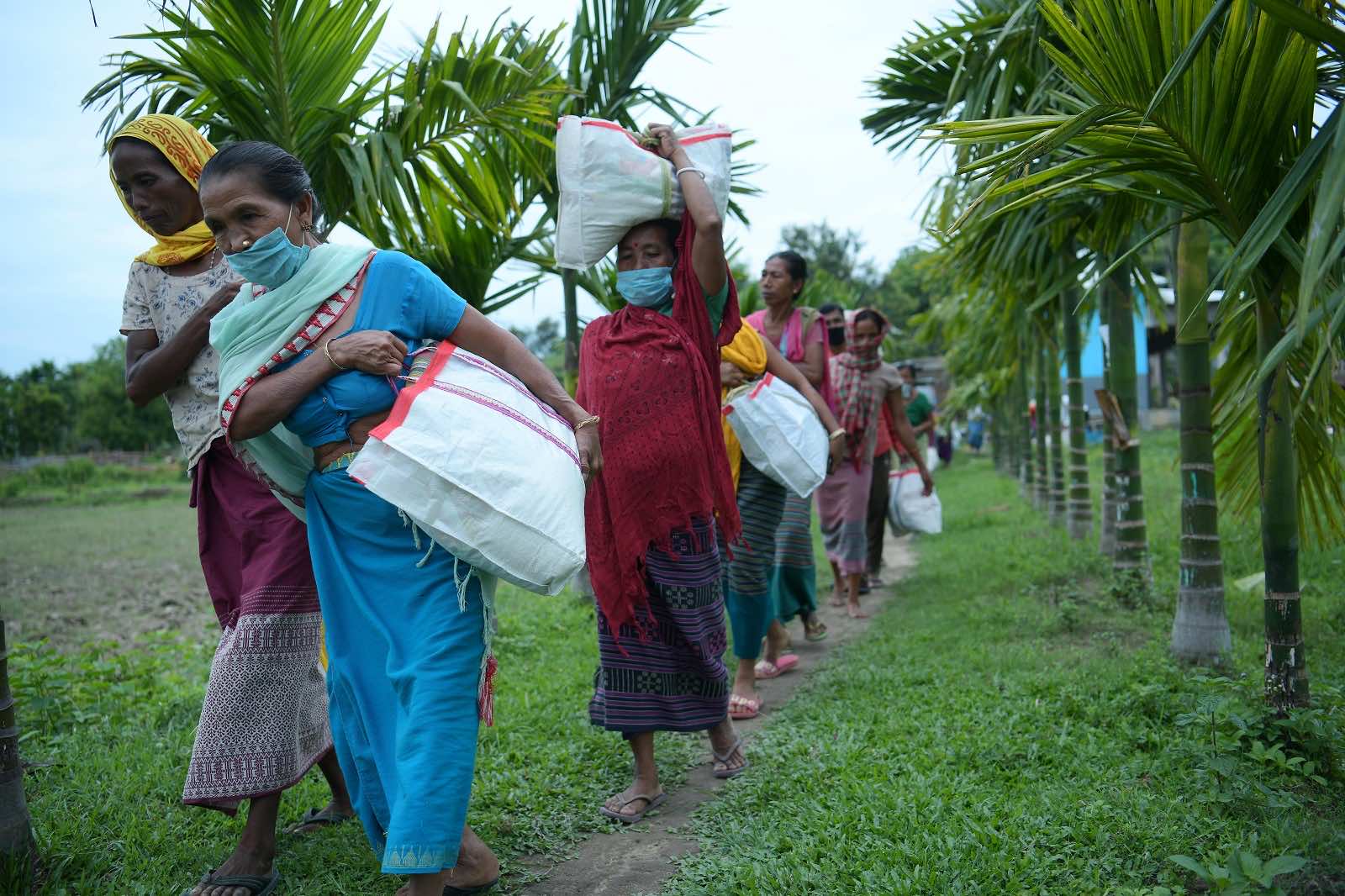 India’s second wave of Covid-19 has been brutal on its people. During the first wave, images emerged of a mass exodus from the major cities with countless people walking – sometimes more than 700 kilometres – back to their villages, many not surviving the journey. Now it is happening again. The pandemic has also seen increased mortality rates, loss of livelihoods and growing malnutrition. While some studies have shown the effect of the pandemic on food security in terms of food shortages, rations and government public distribution schemes, not many have looked at the effect it has had on the producers and production of food. The many quarantine regulations, social distancing rules, lockdowns and border controls have disrupted the supply chain of food and made food security a question mark for many, especially the poor.

Farmers congregated in Delhi to object to the takeover of the agricultural sector by big corporates – yet have little to show for their demonstrations.

Despite the Indian government’s promise to double farmers’ income by 2022, producers have faced one difficulty after another in the last few years. In late 2018, amid a spike in farmer suicides, growers took to the streets to demand loan waivers and higher prices for their produce in an effort to tackle mounting debt. In 2020, with scope for record harvests in rice and wheat, farmers appeared optimistic about their year. This optimism was quickly dampened when the Modi government introduced three new farm acts, which led to protests that continued into 2021. Farmers congregated in Delhi, the national capital, to object to the takeover of the agricultural sector by big corporates – yet have little to show for their demonstrations.

Ever since the first lockdown in India, producers have faced serious difficulties in maintaining their livelihoods. A study conducted in May 2020 among almost 1500 farmers revealed that of the 11 per cent who did not harvest their crop, 24 per cent cited lockdown-related reasons. Of the 63 per cent of farmers who were able to harvest in the month prior to the survey, 39 per cent had stored their crop, with half citing lockdown issues as the reason. Another survey reported that 15 per cent of farmers were unable to sell their harvest due to lockdowns.

These issues are, in part, the result of one of the first consequences of the pandemic: the change in migration patterns. As migrant workers lost their jobs in the cities and returned to their villages, families faced the added pressure of having more mouths to feed. Most migrants were quick to enter the local labour force as a way to contribute to their family’s income. The increased demand for jobs and the willingness to work for lower pay depressed overall wage rates and may ultimately affect the viability and productivity of agriculture as a profession in India.

The availability of more able-bodied men may also sideline women who are working in agriculture, rejigging gender dynamics. Some migrants are also seasonal and are expected to return to their villages for rice-sowing season. However, many of them were stranded in cities during the lockdown. This limited their movement and led to labour shortages in their home villages.

In some cases, states such as Punjab, Haryana and Uttar Pradesh – who are reliant on farm labourers from the eastern parts of India, such as Odisha and Jharkhand for harvests – suffered labour shortages and potentially lower yields and profits during the lockdown. Given that these areas are considered “breadbasket states” due to the crops they produce, their underproductivity has serious implications for food security around the country.

The halt on transportation services during lockdown meant limited access to the fertilisers, pesticides and seeds that are crucial during the sowing and pre-harvest period.

Even if the region’s farmers managed to harvest on their own, they then faced the problem of transportation. The halt on transportation services during lockdown meant limited access to the fertilisers, pesticides and seeds that are crucial during the sowing and pre-harvest period. If they managed to yield a good harvest, taking their produce to the market was nearly impossible with limited transport options available. The road closures and restrictions on interstate travel impeded the movement of produce across the country and limited the number of sale points. As a result, there was extreme wastage of perishable commodities such as milk, fruit and vegetables, and a significant number of distress sales. Those farmers who spent on transportation were left with reduced income to purchase seeds and fertilisers for the next sowing season.

Many of these issues were listed in the May 2020 survey as reasons why 55 per cent of farmers said that the lockdown affected their preparations for the sowing season. However, rather than focusing on cyclical problems or downward spirals, recent reports suggest that things might be looking up. With many migrant workers returning to their villages and spending time on farming, the farming sector is seeing “good progress and with good monsoon … a bumper crop and good income”. Some are even reporting a better quality of life: “city life takes away a lot – health, happiness and community sentiment, though I returned under compulsion, at the moment I am not regretting”. Perhaps increased help on the farm and a projected good monsoon might be a “silver lining for those who returned home”.

Show Comments
Previous Article
The risks of escalating strategic competition in the Pacific Islands
Next Article
A Cold War deal on ice: The Antarctic Treaty at 60