A clearly enamoured new grandfather, the Indonesian President also rebranded himself alongside a happy toddler. 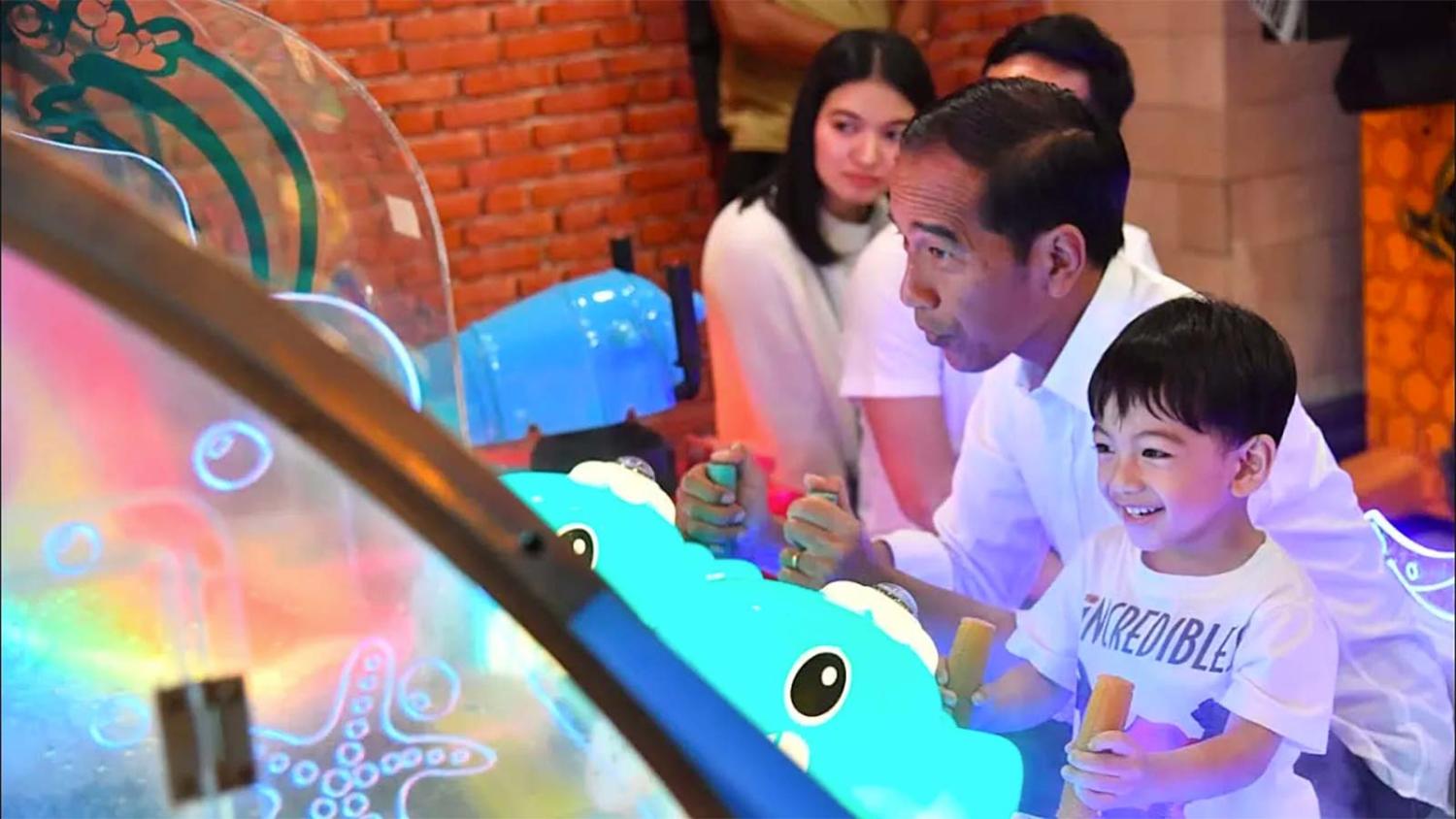 With a week left until Indonesia’s presidential election, polls are tightening and huge mass rallies show the 193 million voters keen to have their say. For incumbent Joko Widodo, better known as Jokowi, his not-so-hidden strength has been his three-year-old grandson, Jan Ethes.

Jokowi’s family are comfortable in the media spotlight. His youngest child, 24-year-old old Kaesang Pangarep, has been particularly prominent with a now-dormant YouTube channel offering a behind-the-scenes look at the presidential family and featuring Jokowi as an ordinary dad. Wife Iriana has spent her time in the various public roles of first mayoral, than governor and finally presidential spouse promoting women’s empowerment and family welfare initiatives.

But none have compared to the sensation that his first grandchild has become.

Jokowi’s eldest son, Gibran Rakabuming, welcomed Jan Ethes Srinarendra to the clan back in 2016. Jan Ethes has been no stranger to the press or the throngs of supporters clamouring for a selfie with his grandfather or, increasingly, himself. But it’s the last six months which has really elevated the toddler.

As the election date nears – and Jan Ethes reaches peak toddler-cuteness – he’s a familiar presence. Gone is the 2014 campaign trick of blusukan, an impromptu visit to nearby marketplace or busy street, now it’s all shopping mall play areas and walks through national parks.

It’s clear Jokowi is enamoured with his first grandchild. It’s also clear the child has been very helpful for the necessary rebrand of the President. With a full term behind him, Jokowi can no longer play the “kampung kid who came good”. His career to this point has been built on a foundation of not being from the political elite and that clearly does not work for an incumbent.

Instead, the candidate Jokowi this time is a family man. He is presented as the archetypal devout Javanese family man with successful children and doting grandchildren.

Jan Ethes has been key to this transformation. Dozens of fan accounts have sprung up on Instagram for thousands of followers to coo over every photo or video clip. In social media-obsessed Indonesia, which ranks as the fourth biggest user of the Instagram app globally, these accounts have done the work for Jokowi spreading the family first message far and wide. The boy’s third birthday last month was tabloid-fodder and sent family portraits viral. The heavy-handed Javanese-ness of the photographs stand in stark contrast to the family’s non-presidential but affluent peers, who often prefer family photos with a modern touch outside of religious holidays.

Appearances on traditional media, such as on a family special aired by Net TV in late January, has further widened his audience. He is now joined occasionally on the media circuit by his cousin, infant Sedah Mirah Nasution.

Not everyone is following. Opposition figures and the Indonesian Child Protection Commission (KPAI) alike have voiced their disapproval of the toddler featuring so prominently in the campaign. In February, the KPAI sent a formal letter to the Election Supervisory Agency (Bawaslu) suggesting Jan Ethes’ involvement may overstep the mark. “Our guess is that there has been an effort to attract Jan Ethes into the arena of political contests,” KPAI Commissioner Jasra Putra told CNN Indonesia.

The reprimand was short lived. Campaign chairman Erick Thohir disputed the exploitation accusation, saying if anything the appearances of the child are proof of Jokowi’s family man credentials.

Jokowi is presented as the archetypal devout Javanese family man with successful children and doting grandchildren.

Still, the KPAI is not amused. Election regulations strictly prohibit minors from participating in political life. Minors are barred from being involved in the process from party politics to campaigning activities, such as distributing materials. Likewise, the KPAI has issued several reminders to not allow minors, particularly young children, to attend mass rallies for the candidates during the open campaign season. This concern is well-founded, with rallies often overcrowded and have the potential to turn volatile. A fear of teaching future generations of Indonesian voters the darker arts of the country’s political process, such as money politics, abounds.

KPAI chairman Susanto has skirted the complaints about Jan Ethes, saying the commission is satisfied with the campaign’s response. As of mid-March no formal violations of the involvement of minors in the election had been recorded.

That is not for a lack of trying, though. Fadli Zon, deputy speaker of the House of Representatives and among the most prominent of the opposition, has criticised Jan Ethes’ role frequently. His preferred medium is his Twitter account where he has previously suggested the President could be exploiting his grandson for personal gain. Zon has also told local media the lines between the public and private life of Jokowi have blurred.

New Mandala fellow Dyah Ayu Kartika’s work on “emak-emak”, a grassroot movement of organised women supporters on both sides of the ballot, could provide an answer to why Jan Ethes has been so prominent – and why the opposition are so unhappy. Women voters are being targeted in 2019 in ways they have never been before. Sandiaga Uno, the ganteng (or, handsome) candidate, is meant to woo women to his ticket. Jan Ethes, with his one-liners and sweet rapport with the media, is hoped to woo them back.

Australia, it’s time to put our political diplomats to the test

There’s a better way to deal with politicians-turned-ambassadors and it comes from (whisper it) the United States.
Melinda Rankin 29 Oct 2018 06:00

The journalist’s death illustrates broader anxieties for the international rule of law and the fate of the global order.
Sarah Logan 30 Oct 2018 15:00

Alerted and (hopefully) alarmed, the new US tactic to scare off Russian interference won’t stop online trolls at home.