The personal is political: Iran protests for a normal life

The regime has trampled not only women’s rights. An array of grievances makes everyone a leader of this struggle. 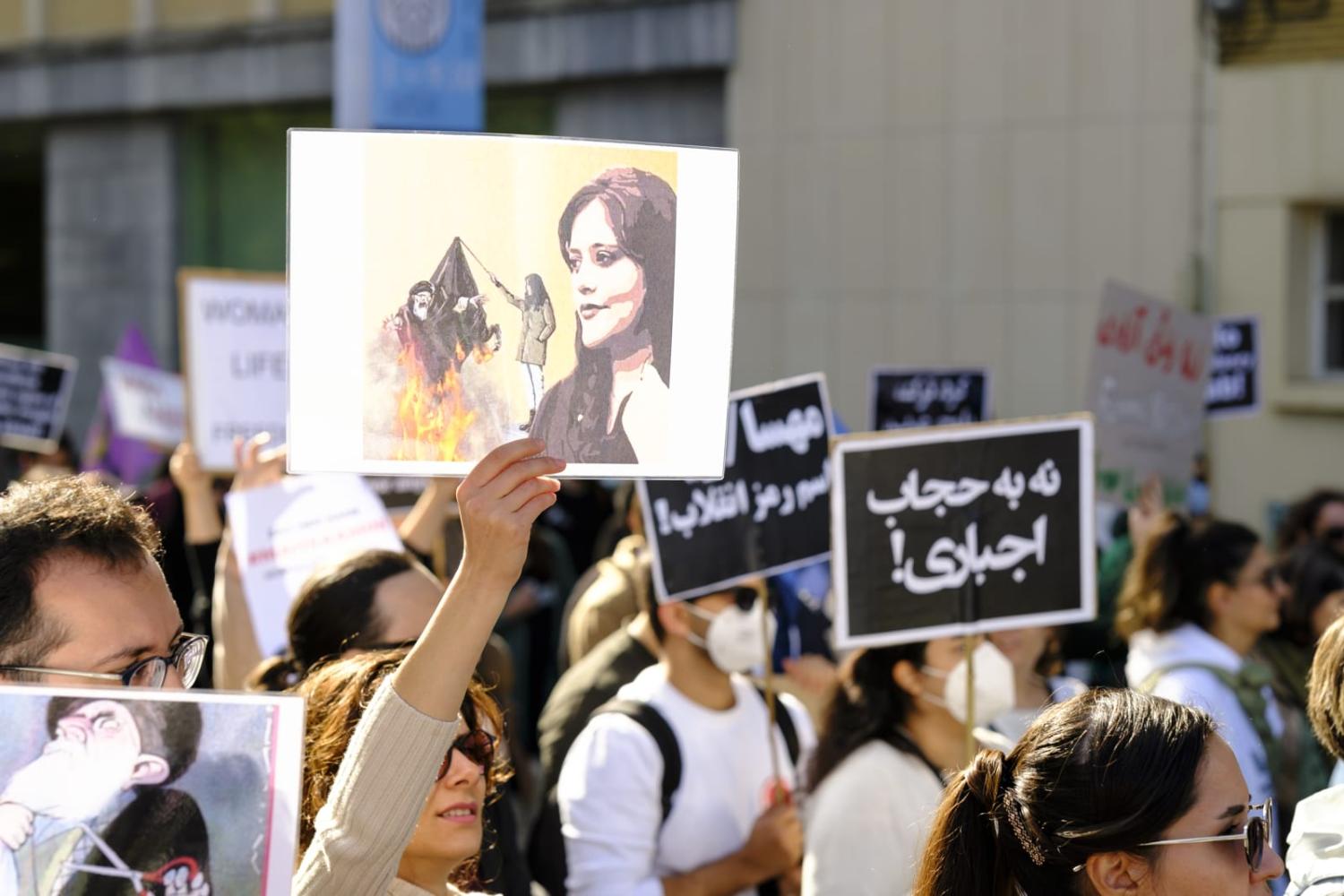 Demonstrations in Belgium, among protests in cities across the world in solidarity with Iranians following the death of Mahsa Amini (Thierry Monasse/Getty Images)
Published 6 Oct 2022     Follow @MrsShadiSnape

Chants of “Women, Life, Freedom” and “Down with the Dictator” have filled the streets of over 80 cities in Iran and more than 200 cities around the world in the past two weeks. The death of a 22-year-old Kurdish-Iranian women Mahsa Zhina Amini while in custody of the morality police has sparked an intergenerational multi-ethnic movement that calls for a revolution and a democracy.

Iran, a country that has often been isolated in the years since the 1979 revolution, is suddenly the centre of attention with numerous debates about how the recent uprisings are the different from previous ones.

The chants themselves as well as the mobilisation of the protesters suggests this movement is different from what Iran has experienced before. Demonstrators from different ethnoreligious groups, genders, locations, and generations have called for gender equality and regime change. This feminist movement has succeeded and has continuously expanded for two weeks with much more damage, casualties and detentions than ever.

It’s important not to reduce this movement to anti-hijab protests, an Islamophobic uprising, or economic grievances.

Yet, these protests are not spearheaded by any single leader from inside Iran or the diaspora. After the uprisings of the Green Movement in 2009, the government enforced house arrest on Mir Hossein Mousavi, Mehdi Karroubi and Zahra Rahnavard, the leaders. But this time every person participating in the protests, regardless of geography or mode of participation, is a leader demanding change. This very characteristic has made it difficult for security forces to suppress the movement. The driver behind this individual yet collective leadership is the well-known feminist principle of “the personal is political”, framed by Carol Hanisch in Notes from the Second Year: Women’s Liberation and emphasising that the oppression of women is partially rooted in political and systemic patriarchy, but also partially due to the difficulties that women face when bringing their personal challenges of gender inequality to the political arena. Hanisch saw the solution to combine the personal and the political as consciousness-raising.

Iranian women have much personal experience of oppression to convey. On 7 March 1979, hijab became mandatory for women in Iran regardless of ethnoreligious background. The next day – International Women’s Day – women took to the streets hoping to overturn this regulation. These protests were suppressed with violence, and the demands of women were reduced to sound like wearing a piece of fabric on their head is a trivial issue in comparison with the political shift that the country was taking. Needless to say, the “trivial issue” quickly expanded to different dimensions of women’s rights in Iran.

The lesson was well-learned. In the years since women have used different ways to demonstrate their dissatisfaction, from reducing the amount of hair and skin that they cover, to removing the hijab in public and tying it to a stick and holding it in a form of non-violent protest. While none of the efforts have been individually effective, they have changed the perception and societal reactions to a point that the policing of Mahsa Jina Amini’s body united people against the system.

However, it is not only women who are facing oppression in Iran. Systemic oppression has influenced the rights and livelihoods of many different groups with different backgrounds. Looking at the ongoing protests, most protestors are younger Iranians who comprise more than half of the population. Born after the Islamic Revolution, they feel strongly about their rights and personal freedoms. And much like other young people elsewhere in the world, they do not trust a political system that fails to prioritise their ambitions and futures.

Resistance has emerged in various art forms that are shared across social media platforms and news outlets.

Listening to the social media-inspired single “Baraye …” released by 25-year-old Shervin Hajipour, one can make a list of transnational’s grievances that Iranian Twitter users have declared as reasons for participating in protests: “Because of …” poverty, the climate crisis, pollution, shooting down the PS752 flight, the extinction of animals, forced immigration, student rights, mental health, discrimination against Afghan refugee children, the imprisonment of activists and scholars, and many other reasons. When sung in demonstrations, every Iranian finds at least one verse closer to their personal experience of living under a religious dictatorship with poor governance. This is why it’s important not to reduce this movement to anti-hijab protests, an Islamophobic uprising, or economic grievances.

Sarah, a 22-year-old student from Iran says, “Throughout my life, I’ve learned that my country is different, and its rules are difficult. I’ve also learned, while growing up, that I must not speak out about my rights; otherwise, I could be imprisoned, exiled, or even worse”. But in the past two weeks, many women like Sarah have decided to speak up and act against oppression. They have been joined by men who experienced their own forms of oppression by the system. Iranians take to the streets every day for a normal life and a better future where the political becomes concerned with the personal.

Previous Article
A free trade zone for Timor-Leste and Indonesia
Next Article
Economic diplomacy: Time for transparency on aid reform

Australia has expended a lot of defence resources in the western side of the Indian Ocean. It is time to look east.
John Edwards 28 Jan 2020 13:30

Australia needs to be very wary of how Donald Trump’s “unbelievable deal” will play out.
Donna Weeks 6 Jul 2020 16:00