The first round of voting showed resistance-era figures still dominate. But questions swirl over who wins the prize. 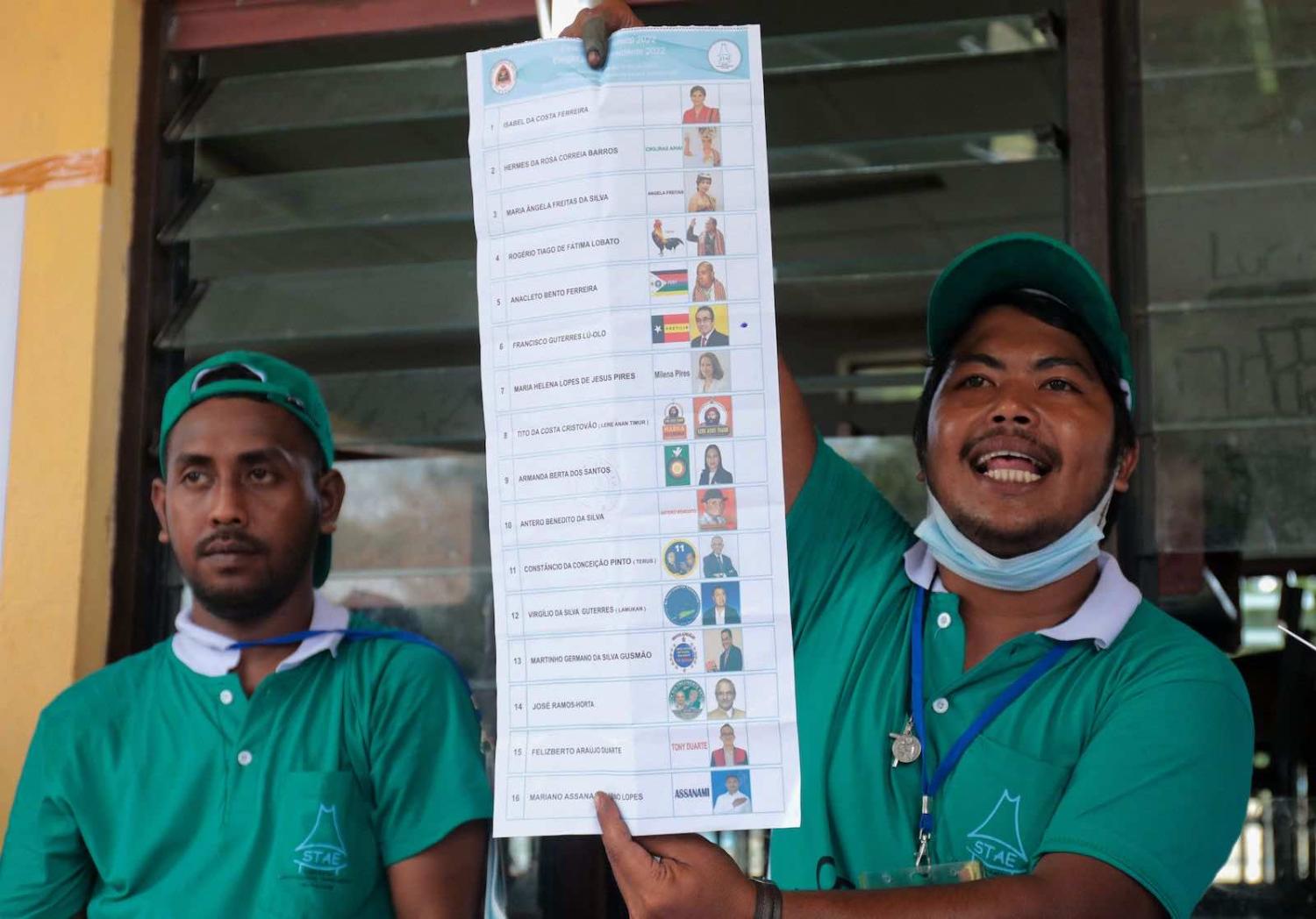 Timor-Leste – one of Southeast Asia’s few vibrant democracies – held the first round of its presidential election on Saturday 19 March. Jose Ramos-Horta led the pack with 46 per cent, while incumbent president Francisco “Lú-Olo” Guterres took second with 22 per cent. The outcome of the 19 April runoff will answer three pressing questions that, along with three take-aways from the first round, collectively carry significant implications for this young democracy and wider region.

Given how close Horta got to winning an outright majority, it’s hard not to see him as the clear favourite. With that said, a race between two candidates versus a muddled one between 16 candidates crystalizes the choice facing voters and provides an opening for Guterres to close the gap if he can unite his political party, the Revolutionary Front for an Independent East Timor (FRETILIN). A resounding Horta victory will give him the political capital necessary to deliver on key promises he made prior the election – more on those below – while a close margin may hinder his ability to deliver on them.

In securing vital pre-election backing from Xanana Gusmão, the country’s most influential political figure and leader of the National Congress for Timorese Reconstruction (CNRT), Horta committed to calling a snap parliamentary election. The roots of Gusmão and CNRT’s desire for this necessitate their own article; in brief, they go back to the 2017 elections and the never-ending feud between Gusmão and FRETILIN Secretary General Mari Alkatiri.

Timorese treasure their democracy and the right to vote.

FRETILIN currently leads a three-party coalition in the national parliament, which has proven to be somewhat durable since they took power by deposing a CNRT-led coalition in 2020. Parliamentary elections are currently slated for 2023; an early election would be competitive, tense, and take place in or around the third quarter of 2022.

In securing Gusmão’s endorsement, Horta also indicated support for Tasi Mane, the onshore oil and gas development project that carries existential economic significance for the country. There are numerous questions about the project’s cost and viability – part of why the current FRETILIN government essentially paused it – but it is Gusmão’s top priority, and he sees it as his legacy.
If the project is resumed, the country is “betting the house” on it working and delivering the promised economic benefits. If it doesn’t, the country may miss out on much-needed oil and gas revenue and face an economic cliff in the late 2020’s or early 2030’s. The cost of the project necessitates international investment, which opens the door to investment-driven geopolitical competition in a country that lies along the Ombai-Wetar Straits, whose “extremely deep channels … provide undetected access for submarines between the Pacific Ocean and the Indian Ocean.”

The struggle for re-independence, an important piece of Timorese national identity and source of legitimacy for political leaders, tends to dominate campaigns, and this election was no different. But it should be noted that politicians have started to talk more about policy issues during recent elections – a welcome development in a country that is facing an array of development and economic challenges. Expect the resistance-era credentials and divides between Horta and Guterres to be flashpoints for the duration of the campaign.

Timur, the former commander of the Timorese military, resigned from his post to contest the election and competed with the president for FRETILIN support. Conventional wisdom (including from this author) held that Timur would be a competitive candidate, but the results showed otherwise.

Guterres’ margin of victory over Timur – especially in Baucau and Viqueque municipalities, which are part of FRETILIN’s geographic base of support – shows that the party’s voters clearly prefer him. Yes, Timur bested Guterres in Lautem municipality, another base of FRETILIN support, but that’s probably because the former was born there and maintains close familial links, which are important in Timorese politics and society.

To have a chance at winning, Guterres must unite his party behind him. If he doesn’t, Horta wins.

Armanda Berta dos Santos, one of two deputy prime ministers and leader of Enrich the National Unity of the Sons of Timor (KHUNTO), won nearly 9 per cent of the vote, reinforcing the political viability of her party, which claims the mantle of representing disenfranchised youth. Mariano “Assanami” Sabino, a Member of Parliament and Democratic Party (PD) stalwart, won 7 per cent of the vote, reinforcing his position as the most favourably viewed young political leader in the country. PD has roots in the resistance-era student movement, and, like KHUNTO, lays claim to representing young voters. Both dos Santos and Sabino are part of the oft-discussed next generation of Timorese leaders and increasingly well-positioned to play a prominent role in their country’s future.

Timorese treasure their democracy and the right to vote – after all, this is a country where 97 per cent of eligible voters turn out for the 1999 popular consultation, despite gross levels of intimidation and violence. Expect the coming weeks to be contentious and tense, but never forget how much the act of casting a ballot matters to the Timorese people.

Previous Article
War in Ukraine: How this might end
Next Article
Pacific nations send a message on Ukraine – and great power rivalries

We need to look afresh at Australia’s priorities in international engagement and consider how these should be resourced.
Ihsan Yilmaz 15 Dec 2016 10:36

EU-Turkey relations: A decade of reversals

With Battulga now at the helm in Mongolia, the Moscow-Ulaanbaatar relationship looks set to deepen.