Lessons of globalisation: the vulnerable women of the Nokia factory

A technology giant transformed a small village in India promising jobs, yet at a cost to female workers that lingers. 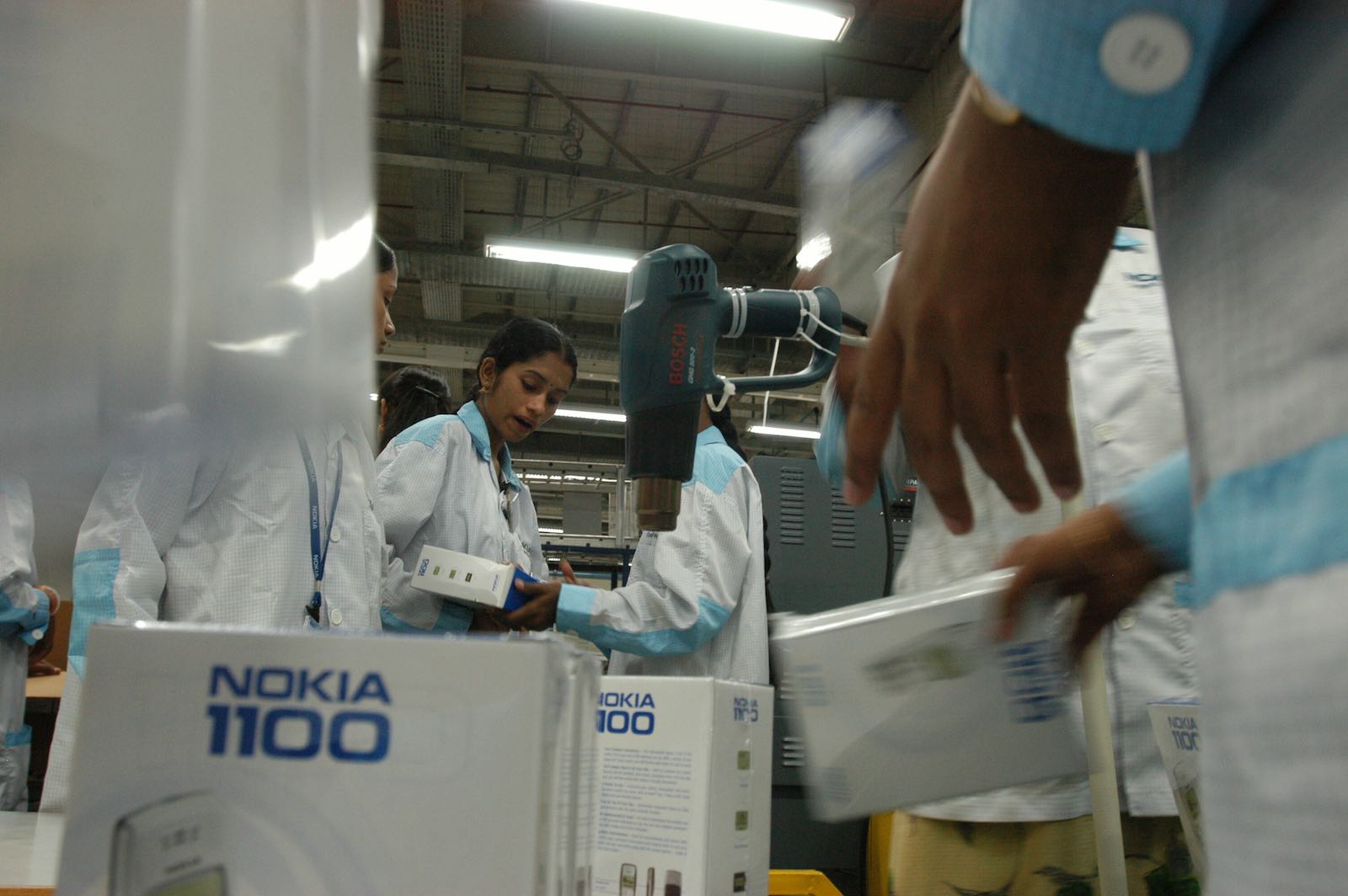 Just 40 kilometres southeast of Chennai in the south of India lies Sriperumbudur, a part of the Kanchipuram district of Tamil Nadu. While Kanchipuram is a town, famous for its silk saris and Hindu temples, the village of Sriperumbudur has mostly been famous for the assassination of the country’s late prime minister, Rajiv Gandhi. The site was recently visited by Sonia, Rahul and Priyanka Gandhi in the last days of recent election to mark the 28th anniversary of his assassination. Sriperumbudur has flourished in the years since and now boasts a comparatively higher literacy rate than the state average, and the village has some 6318 houses, all supplied with basic amenities of water and sewage.

Back in 2005, Sriperumbudur was buzzing as a technology giant came to town. Mobile phone company Nokia began construction of a major factory, a symbol of industrialisation that lit up a spirit of excitement in the village about the transformation and change that seemed possible.

It was especially exciting for local women, who saw an opportunity for higher paid work and an escape from farm labour or other typical jobs in the district. But the experience also became a salutary lesson on the fluctuations of the global economy and the vulnerability of women when exposed to big businesses in search of profit.

The attraction of Sriperumbudur to a big international company was location of the village, sitting inside the Tamil Nadu Special Economic Zones’ Act (SEZ), a point that allowed flexible labour provisions. Nokia was able to hire without any restrictions on working hours for women and allowed women to work night shifts. According to a field study by researcher Madhumita Dutta published in 2016, Nokia and its supplier companies preferred to hire women due to an assumption about their “docility” in the workplace, as well as being patient and nimble. In the months ahead, of the 8000 workers hired by Nokia and its seven supplier companies, 70% were young local women.

At the time, not many people lived in Sriperumbudur. Workers were recruited from as far 50 kilometres away, travelling to and from the factory. Nokia set out on an impressive, large-scale recruitment drive to hire girls who had just completed their senior high school exams. There were advertisements, college theatres booked for interviews and campaigns to create a flurry of action and excitement. The selection criteria were clear enough, with the would-be workers put through tests for hand steadiness, hand-eye coordination, finger dexterity, and more. The women would have to fit minute screws into the more than 1000 components within the mobile phone on a constantly moving assembly line.

The salary was alluring. In what for many would be their first jobs, they could earn a starting wage of Rs2500­–5000 (US$36­–72) per month, a significant income in comparison to what they would earn in agriculture. This gave women a potential for independence, emancipation and empowerment. Within a year, having someone in the family work in Nokia became something of a status symbol.

According to Dutta’s research, there was apparently a preference to hire girls who did not excel in school or were from government schools because they were assumed to have limited opportunities to switch jobs. They also preferred women from backward castes, scheduled castes or scheduled tribes because they were seen to be more willing, than the upper or middle-caste women, to work night shifts.

The pursuit of work in a globalised economy had brought them what became a temporary opportunity, only for many the allure of such a job also interrupted their schooling and perhaps denied them the chance to do more.

The high demand for women was matched with important safeguards for them as well. Corporate buses were arranged to ferry women to and from their homes every day. Resting areas for pregnant women and nurseries for children were also allocated.

However, this rosy picture started to fade in 2009 when employees launched strikes demanding pay rises commensurate with the duration of employment in Nokia. They were already beginning to get frustrated by the monotony of repetitive tasks and constant standing in the factory. The friendships that they forged helped them to cope, until management “reshuffled” the lines every six months. This was done supposedly to create a productive, “hyper-efficient” social setting, but it meant the women would constantly need to re-build new friendships.

In 2010, Nokia settled the wage strikes by increasing the pay, but in 2013, the Indian tax authorities froze Nokia’s assets and sued for millions over allegations of tax evasion. It was a downward spiral from then – in the latter half of that year, Nokia sold its operations to Microsoft, and in October 2014, Nokia Sriperumbudur was instructed to suspend all work, and the next month Microsoft terminated the mobile purchase agreement and the factory shut down the following day.

For the women workers, this left an uncertain future. The pursuit of work in a globalised economy had brought them what became a temporary opportunity, only for many the allure of such a job also interrupted their schooling and perhaps denied them the chance to do more.

An ethnographic study done by Ashish Mishra and S. Bridget Leena followed the lives of many of Nokia Sriperumbudur’s former employees after the closure. They sought to understand the fate of these former employees and the effectiveness of Nokia’s compensation policies. As compensation for the closure, a voluntary retirement scheme (VRS) was offered. Out of 6600 employees who remained in May 2013, 5600 took up the VRS scheme and they were paid Rs3–5 lakhs (approximately US$4300–7000). More people took up the schemes in the months following, leaving Nokia to pay Rs250 crore (US$35.9 million) in total. By October that year, 850 employees remained, hoping the factory would fill more orders or the compensation on offer would be increased.

Over the course of their study, Mishra and Leena asked the women why they did not take up the scheme and revealed a trend: many of them saw the amount as insufficient vis-à-vis the amount of responsibility they had taken up at home. As one put it:

Rs 5 lakh is not sufficient for a person like me who has slogged for the company for eight years. I have two sisters who are pursuing nursing and Bachelors of Education. My dad is an auto driver and cannot afford to educate them.

Of those women who did accept the VRS scheme, many were unemployed for a long time. Women expected similar working conditions as Nokia in all other factories. This was unrealistic and hindered many women in prospective employment. Nokia employees also carried a reputation, deemed as overpaid, not skilful, too spoilt and demanding. Managers of other factories also argued that they had too many men on the shop floor to allow employment of women.

Many women who could not afford higher education had chosen to join Nokia after seeing the allure of a stable position on the shop floor quickly.

But the challenge went further. The skills that women obtained at the Nokia factory were often not transferable to other assembly plants, such as those for automobiles or auto components. Many women who could not afford higher education had chosen to join Nokia after seeing the allure of a stable position on the shop floor quickly. This meant that most women were just school graduates, whereas the men in other factories were polytechnic or industrial training institute graduates. As another woman told Mishra and Leena:

I am 27 years old now, I did not pursue my correspondence education … Even if I was to go to a textile export company, because of lack of experience they will only pay me Rs 3500. I don’t have other skills that can be used in other industries.

Seeing skill disparity as a key problem preventing re-employment, Nokia offered a “bridge initiative” for former employees of over five years. Some 30 training courses were offered across Tamil Nadu, covering areas such as Microsoft Office and garment making. It saw a 60% uptake.

Eventually, the Tamil Nadu government resolved the tax dispute and in 2016 confirmed talks with Taiwanese electronics company Foxconn for the revival of the Nokia plant. Since then, Foxconn has been manufacturing phones for different companies, employing 15,000 people and 90% women. In December 2018, it was announced that the Foxconn unit in Sriperumbudur will begin manufacturing iPhone models, giving women a greater chance of being re-employed.

Opportunity for the women workers of Sriperumbudur seems to be turning for the better, at least for now.

What this experience shows is the fluctuations that women go through in the tumult of the global market, which is so often reported in terms of headline figures, trends and stock prices, and rarely in terms of the human vulnerability and consequences of economic decisions. The Nokia factory empowered women to take on more than domestic responsibilities but left them stranded after the shutdown of the factory. They were equipped with skills that were not transferable to other jobs and have struggled to be re-employed.

The power lies with the companies, the convenience that comes from global competition by governments seeking to attract investment, whether with flexible labour regulations or other incentives. In Sriperumbudur, the experience was sweet yet bitter, giving women hope for a brighter, more financially independent future but also dashing dreams in the process. The challenge for the rights of women is to better understand the costs so the cycle is not repeated.

* Special thanks for help with this article to Professor Robin Jeffrey, Visiting Research Professor, Institute of South Asian Studies, NUS, Emeritus Professor, ANU College of Asia and the Pacific, and Distinguished Fellow at the Australia India Institute.