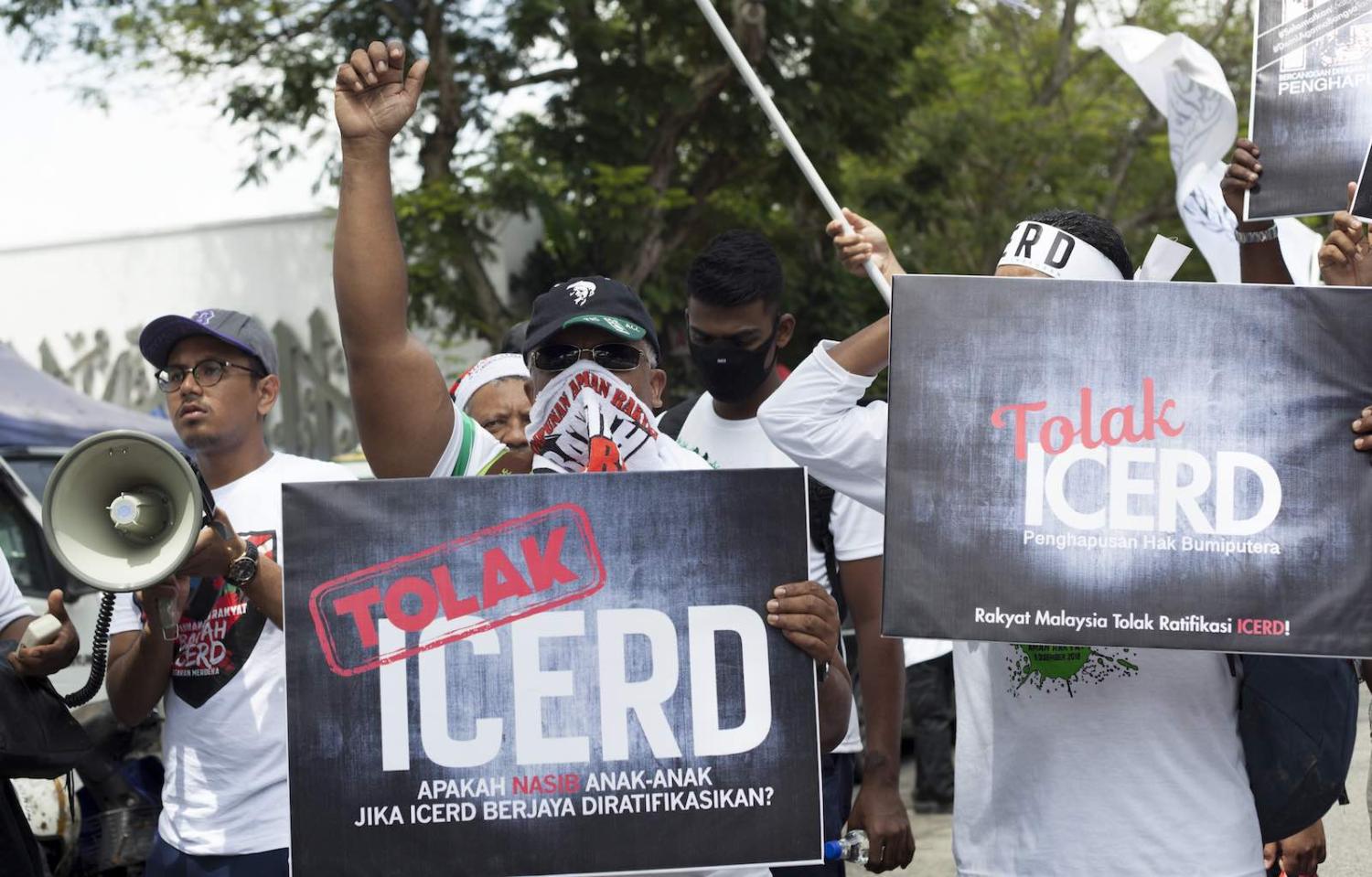 Opposition supporters gathered in Kuala Lumpur last year to celebrate a decision not to ratify the UN International Convention on the Elimination of All Forms of Racial Discrimination (Photo: Aizzat Nordin via Getty Images)
Published 25 Sep 2019     Follow @1AmyChew

When Malaysia’s Barisan Nasional (BN) coalition ruled the country, it faced an opposition that campaigned on a platform of anti-corruption, free and fair elections, and greater democracy.

BN, led by the United Malays National Organisation (Umno), the largest and most dominant party, ruled the country for 61 years until its shock defeat last year by the Pakatan Harapan coalition, with Mahathir Mohamad at the helm.

Now, for the first time in its history, Umno finds itself out of power and playing the role of the opposition. And in this “new Malaysia”, where once the opposition campaigned for reforms and clean governance on a pluralist platform, it has now been replaced by a previously moderate Umno turned ultra-Malay to court the Malay majority.

The change in the characteristic of Malaysia’s opposition from a plural platform to an ethno-religious one has transformed the country’s political landscape.

To further burnish its ethno-Malay credentials, Umno has teamed up with its one-time arch enemy, the Islamist Pan Malaysian Islamic Party (PAS), to contest elections under the banner of Malay rights and Islam.

This month, thousands thronged Umno’s headquarters at the Putra World Trade Center in one of the largest crowds seen in recent years, to witness the signing of a charter to seal the Umno-PAS collaboration.

The change in the characteristic of Malaysia’s opposition from a plural platform to an ethno-religious one has transformed the country’s political landscape. Identity politics has become pronounced and inflammatory.

It has manifested itself in the calls for the boycott of non-Malay products, even halal products produced by non-Malays. It has also seen the proliferation of fake news involving race that has stirred anger and anxiety among segments of the Malay community suffering economic hardship.

Among this is false claims of mainland Chinese being indiscriminately granted citizenship in Malay-majority Malaysia, a story which went viral, causing Malays to feel they are losing out and that the country is about to be taken over by the Chinese.

Another incendiary hoax that circulated recently was a picture of a Chinese-looking man burning the Malaysian flag, angering many Malays who called Malaysian-Chinese people unpatriotic, with some netizens demanding that “Chinese pigs” should leave the country.

A reverse image search revealed the photo was actually from a 2013 incident in Manila where a former Filipino police officer burned the Malaysian flag to protest against the then–Philippines President Benigno Aquino’s handling of the Sabah issue.

The veracity of the photo and its inflammatory implications were largely ignored even by the country’s political elite, with Umno’s secretary-general Annuar Musa tweeting out the photo from his official Twitter handle.

Umno n BN have laid strong foundation for the nation.We live in peace and harmony for almost seven decades...BUT NOW IT STARTS TO CRUMBLE,piece by piece,bit by bit... pic.twitter.com/yGiAv8vpsA

Malaysia’s identity politics has triggered a competition among political parties, non-government organisations, and political elites to be the biggest champion of Malay rights and special privileges, which are enshrined in the constitution and accepted and respected by all Malaysians.

It has triggered a race to be a defender of Islam, which is also enshrined in the constitution “as the religion of the Federation”, but other religions are allowed to be practiced in “peace and harmony”.

Malaysians of all races have long respected and accepted the sanctity of Islam, but the rising surge of identity politics has seen the opposition and opposition-linked NGOs accuse the Pakatan Harapan coalition of being anti-Islam in a bid to discredit the government. In government-owned mosques in several states, pro-opposition preachers have been telling their congregation that the government discriminates against Islam, wants to eliminate Islam, and is “liberal,” which is an anathema to conservative Muslims.

Politicians from the Chinese-based Democratic Action Party (DAP), a member of the ruling coalition, have been a particular target of such attacks, where the party is constantly accused of being anti-Islam and seeking to take over the country.

Hence controversial Indian Muslim preacher Zakir Naik, wanted in India on money-laundering charges, has become a cause célèbre for political elites, never mind the fact that he accused the country’s Hindus of being more loyal to India’s Narendra Modi than Malaysia’s Mahathir.

Naik also called Malaysian’s ethnic Chinese “old guests” who should leave the country before he does. Naik was granted permanent residency in Malaysia by the previous government.

In an illustration of the febrile political climate, Malaysia’s youngest minister, Syed Saddiq Abdul Rahman, who initially backed calls for the preacher to be deported, said “an attack against our Chinese and Indian brothers and sisters is an attack against all Malaysians,” but later changed his tune after suffering a huge backlash from Malay-Muslims. Days after his remarks, Syed Saddiq called on Malaysians to forgive Naik and to “move on".

This focus on identity politics steals attention from where it should really be directed. It is crucial for the Pakatan Harapan government to fix the economy, a mammoth task given the huge debts it inherited, but it is possible if all members of the coalition parties sit down and work together with discipline and focus.

If the economy blooms, hatred and suspicion will dissipate.

Yet given the state of provocation, the disregard of political elites for the potential of racial riots, with some expressing “it will never happen” or others simply shrugging their shoulders, as if to say “who cares”, is mind-boggling.

In the event of the worst, everyone will suffer, as fire does not distinguish race or religion. There will be no winners, only the ashes of the power-hungry.

Hong Kong is being drained of it’s language, freedom of speech, and now it’s surrounding seas. Is a brain-drain next?
Angela Han 18 May 2017 12:24

The snub demonstrates Beijing now has another diplomatic tool in its arsenal.
Alexandre Dayant 19 Feb 2020 10:00