Mindful Mattis did just fine at the Shangri-La Dialogue

The US Secretary of Defense fleshed out the Trump administration’s “free and open Indo-Pacific” strategy with aplomb. 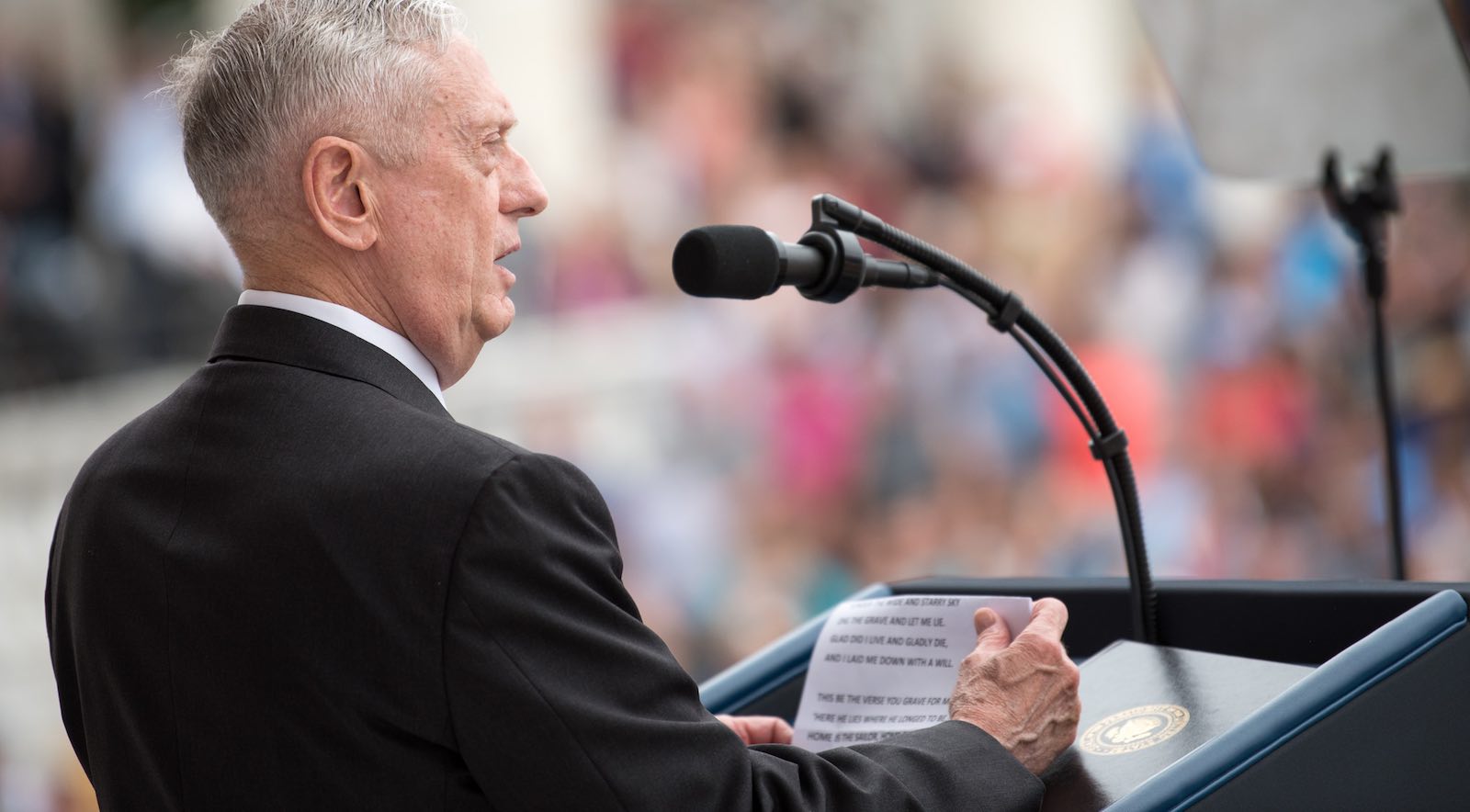 The theme of geopolitical competition which ran through the 2018 Shangri-La Dialogue was appropriately expansive for the debut of the US Indo-Pacific strategy as outlined by US Defense Secretary James Mattis.

Given that Singapore will host the Trump–Kim meeting in just over a week, that on-again, off-again melodrama could easily have sucked the strategic oxygen out of the annual Asian security dialogue. The US–North Korea summit was the object of much speculation and rumour in the corridors, but owing to Mattis’s steering it wasn’t the all-consuming distraction it might have been.

Instead, China’s overbearing behaviour, especially in the South China Sea, was again centre stage. While Mattis’s speech will be analysed most acutely, it was striking how many defence ministers, including Singapore’s Ng Eng Hen, went out of their way to flag China’s stepped-up militarisation of the South China Sea as cause for strategic concern.

Mattis, too, reprimanded China for placing war potential on the features it occupies in the Spratly and Paracel Islands, including “the deployment of anti-ship missiles, surface-to-air missiles, electronic jammers, and more recently, the landing of bomber aircraft at Woody Island”. These weapons systems, Mattis asserted, are “tied directly to military use for the purposes of intimidation and coercion”.

A key aspect of the message Mattis tried to convey is that negative behaviour has consequences. The immediate, “relatively small” consequence of Beijing’s recent actions in the South China Sea was the US decision to rescind an invitation to China’s navy to participate at this year’s multinational RIMPAC exercises off Hawaii.

Mattis went further in question and answer, warning of “much larger consequences” in future if China denies its neighbours “the freedom of political action”. Unless China can find a way “to work more collaboratively”, then consequences “will continue to come home to roost”.

There is, of course, significant doubt in the region about US willingness to match words with actions. That is nothing new. Nonetheless, the sense of a broader pushback against China was palpable at this year’s Shangri-La Dialogue.

This must surely have registered with the Chinese delegation, although Indian Prime Minister Narendra Modi’s marked reluctance to censure China in his keynote address (Modi plays by the “rules” at Shangri-La) has been noted as a win in Beijing.

Mattis was careful to iterate that the US will pursue cooperation with China “whenever possible”, a point he also made en route to Singapore. He also said that Washington would “not ask any country to choose between the United States and China, because a friend does not demand you choose among them [sic.]”.

Mattis’s greater purpose at this year’s Shangri-La was to flesh out the Trump administration’s whole-of-government strategy “which espouses the shared principles that underpin a free and open Indo-Pacific”. Not everyone was convinced. Mattis was pointedly asked if the fights that the Trump administration is currently picking with its allies and partners, on trade and other issues, are fulfilling China’s “strategic aim” of splintering US alliances.

Mattis’s vision for a “free and open” region struck familiar notes with that also outlined by his recent predecessors at the Shangri-la Dialogue, emphasising shared principles and respect for sovereignty of all nations “large and small”; freedoms of commerce and navigation; and adherence to international rules and norms “without coercion”.

The most obvious difference is that the US has now embraced the “Indo-Pacific” nomenclature, including the recent redesignation of the US Pacific Command as the Indo-Pacific Command, notably described as America’s “priority theatre”.

Critics will dismiss the change of name as an empty gesture, particularly since the command’s area of responsibility, comprising half of the Earth’s surface, “from Hollywood to Bollywood”, remains unchanged. Without additional resources, US intentions to increase the command’s “lethality” could appear hollow, regardless of Mattis’s conceptual nod to the “increasing connectivity” between the Indian and Pacific oceans.

Mattis was therefore at pains to stress that the Indo-Pacific strategy is underpinned by tangible “security, economic, and development investments”, including the replacement of third-generation fighters with fifth-generation aircraft, while augmenting “our most capable ships” in the Indo-Pacific Command’s fleet.

Washington’s motivation, much like Australia’s, for embracing the Indo-Pacific as its primary geopolitical canvas reflects a fundamental bet on India realising its promissory potential to “act East”. Mattis described India as a “responsible steward”, highlighting the convergence of strategic interests between Washington and Delhi, shared values, and respect for the rules-based order.

The strength of this non-allied partnership is the basic proposition to be strategically tested. Yet on the strength of Modi’s somewhat nebulous, non-committal performance at Shangri-La, prospects for America’s “look West” strategy gelling with India’s “act East” still appear uncertain.

Given that, it was surprising to hear almost nothing of the Australia–India–Japan–US quadrilateral at Shangri-La. Such oversight is perhaps deserved, since the Quad has done very little since it was reconstituted last November as a low-key senior officials meeting. Mattis admitted he had dropped a mention of the Quad from his original draft. However, downplaying the Quad at Shangri-La was shrewd, as far as helping to secure Southeast Asian buy-in to the Indo-Pacific concept.

Mindful of his hosts’ sensitivities, Mattis wisely included a conspicuous nod to ASEAN “centrality” in the regional security architecture. According to my colleague Aaron Connelly on Twitter, this could be pivotal in overcoming Singapore’s reticence about incorporating “Indo-Pacific” into its strategic parlance (watch this space).

Mattis’s accomplished performance at this year’s Asia Security Summit revealed how he has grown into the role since his debut last year, including a subtle appreciation of regional dynamics that manifested as much in what he did not say, as in what he did. Asked by one delegate, “How are you bearing up?”, Mattis answered, “I’m doing just fine, thank you. No problem.”

That is just as well, as there is much riding on his shoulders.