The South Korean president came to Washington for vaccine supplies and to shore up a legacy for North Korea engagement. 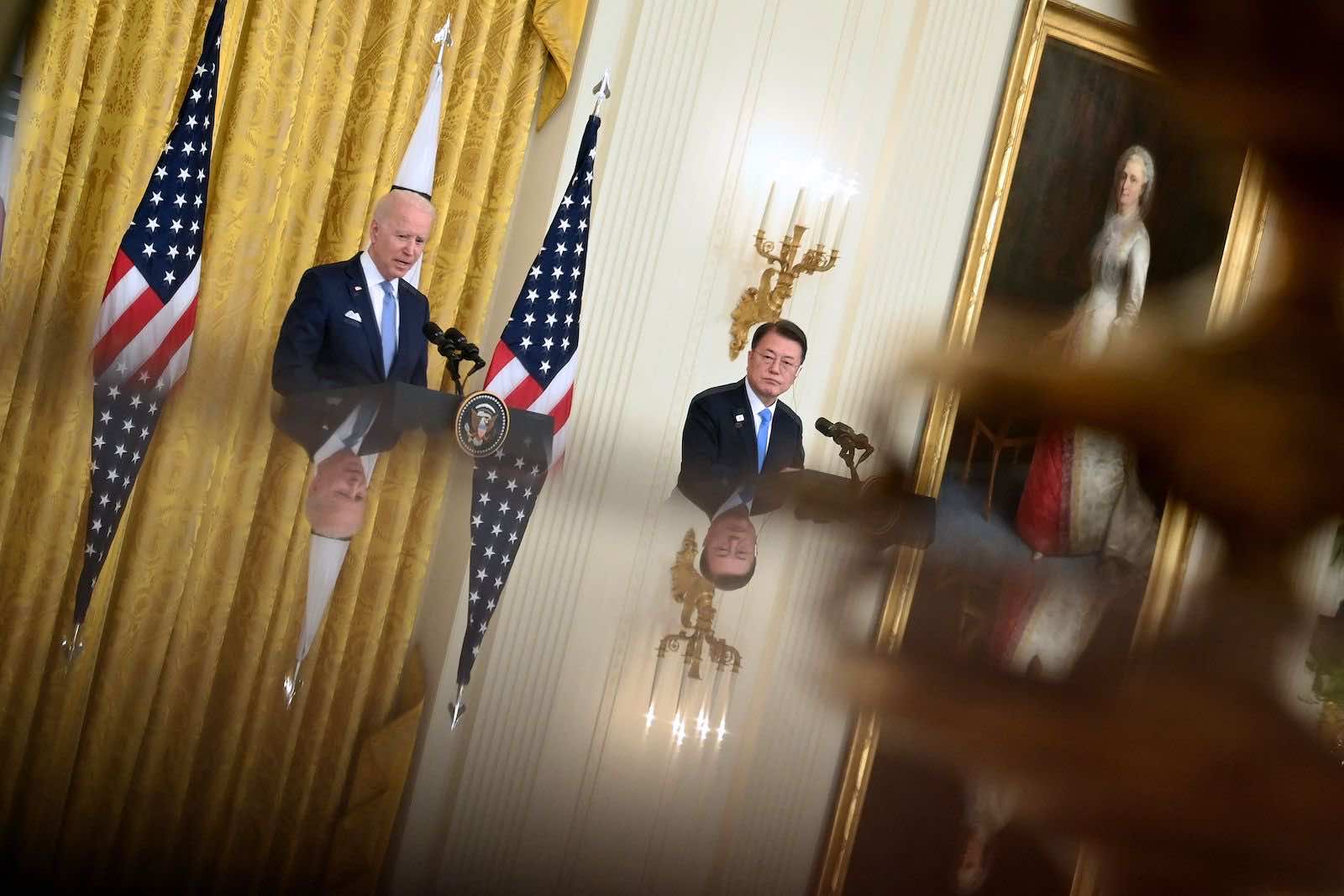 US President Joe Biden and South Korean President Moon Jae-in held their first in-person summit in Washington last month, signing a lengthy joint statement that underscored the linchpin alliance forged in the battlefields of the Korean War and a shared vision governed by democratic norms, human rights, and rule of law. The statement charted out the road ahead for Washington and Seoul on common challenges, including the coronavirus pandemic, climate change, emerging technology, the Indo-Pacific, and North Korea.

“It was the best visit, and it was the best summit,” wrote Moon as he wrapped up the visit. “The outcome of the talks could not have been better. It far exceeded our expectations.”

Though the meeting was Biden’s second in-person meeting with a head of state – the first was with Japan’s Prime Minister Yoshihide Suga – South Korean media were keen to point out that the summit was the first mask-free meeting held at the White House since the coronavirus outbreak. By contrast, Biden wore a double mask during his meeting with Suga.

Beyond the formalities, however, just how fruitful was this first sit-down, face-to-face, no-mask meeting for Moon? He received “surprise gifts” from the US, but will these gifts allow him to deliver on his domestic and foreign policy goals?

For Moon, the two most pressing items on his agenda for the summit were boosting his country’s coronavirus vaccine supplies and resuscitating diplomacy with North Korea. The South Korean government has said it had secured enough vaccines to achieve herd immunity by November. Vaccine shipments, however, are scheduled for the latter half of the year, and with only 3% of the population having received the vaccine and case numbers on a steady rise, fears of an inadequate and delayed vaccine distribution have grown among the South Korean public. To address vaccine shortages, the South Korean government and senior officials have advocated a vaccine partnership with the US through a vaccine swap and joint production opportunities with US pharmaceutical companies.

On engagement with North Korea, the Moon government faced equally challenging currents. With prospects for a nuclear deal on the wane, Pyongyang had not only closed the door to talks, it had also expressed displeasure with the Moon government through harshly worded rhetoric – even going so far last year as to threaten to blow up the inter-Korean liaison office and promptly delivering on this promise hours later. And with less than a year remaining in Moon’s term, the pressure has intensified even more over an issue widely considered his goal for a presidential legacy.

At the press conference following their meeting, Moon and Biden announced that the US would be providing 550,000 vaccines to the South Korean servicemen engaging with US troops on a regular basis in Seoul. Though a silver lining, this supply is at best a stopgap measure and inadequate to address Seoul’s current challenges in distributing the vaccine to the population. To reach its immunisation goals, Seoul must bank on the vaccine partnership contracts signed between its conglomerates and US vaccine corporations Moderna and Novavax. Both Moderna and Novavax are each slated to manufacture 40 million doses in Seoul through a partnership with South Korean conglomerates; however, it remains unclear when the South Korean public will have access to these vaccines.

This dampens Moon’s already weak prospects for re-engaging North Korea before the end of his term.

The joint statement from Biden and Moon gave a nod to the 2018 Singapore Statement and the preceeding Panmunjom Declaration as just one foundation for the Biden administration’s policy towards North Korea and left open the door to dialogue with Pyongyang. This, however, was couched in the premise that the two sides remained committed to denuclearisation. What’s more, the statement called for the full implementation of UN Security Council resolutions and improving North Korea’s human rights situation. And while Biden expressed support for inter-Korean engagement, he clarified his position during the joint press conference.

This, of course, dampens Moon’s already weak prospects for re-engaging North Korea before the end of his term. Pyongyang, for its part, has remained silent about the summit. With Biden drawing a clear line on denuclearisation, and Kim’s brooding reticence, there remains little if any overlap in the means and ends to nuclear negotiations among Washington, Pyongyang and Seoul. In brief, Moon may need to prepare to close the chapter of nuclear diplomacy and reconciliation with Kim soon.

Upon touchdown in Seoul, Moon briefed the heads of South Korea’s political parties to step up cooperative efforts to implement the results of the summit. With less than a year remaining in his term, Moon’s last, best chance at salvaging either his domestic or foreign policy goal could rest on productive cooperation – at home and abroad.