Urban dissidents trained by battle-hardened guerillas in the countryside could make things harder for the Tatmadaw. 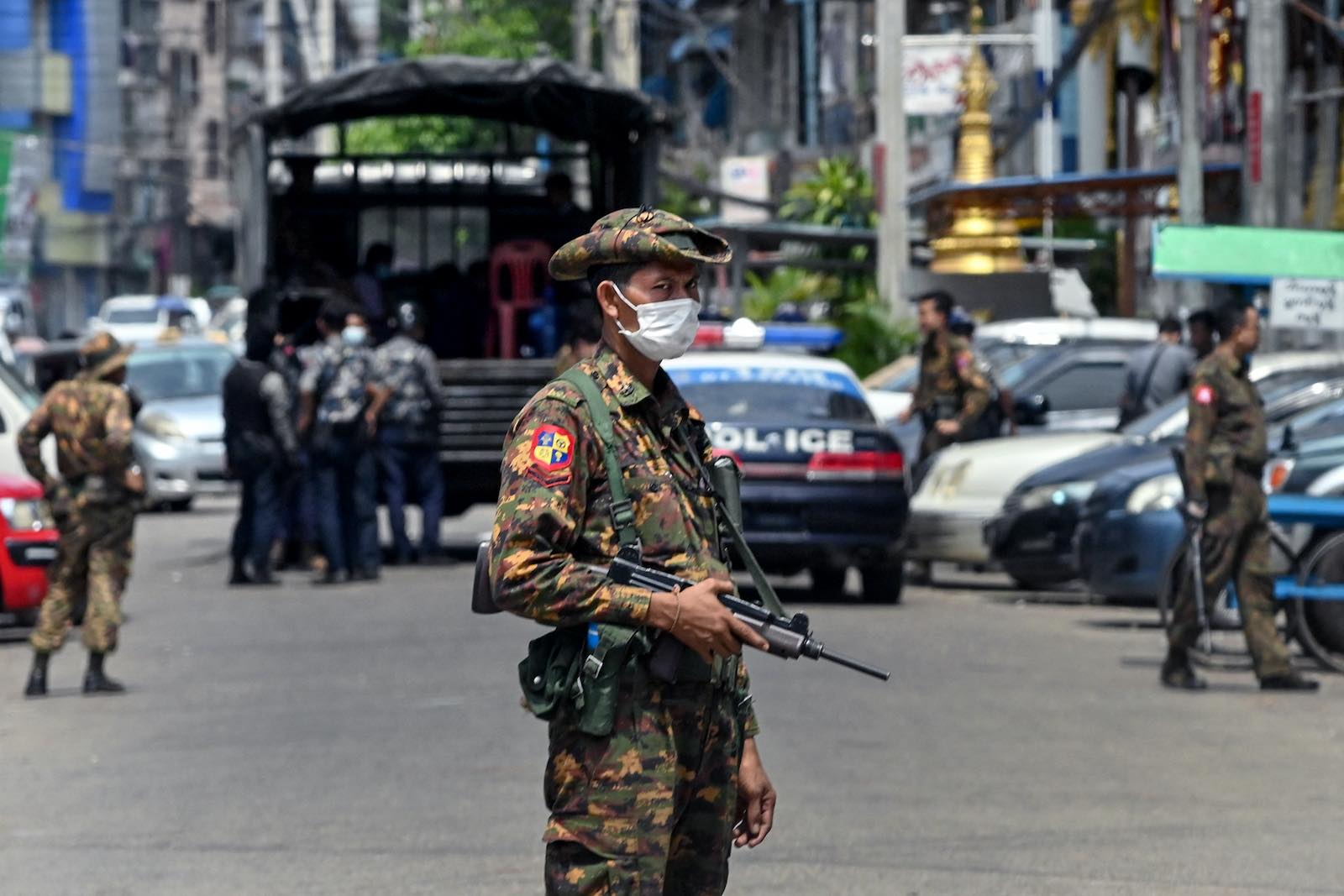 A soldier stands guard as security forces search for protesters who had been taking part in a demonstration in Yangon, 7 May 2021 (STR/AFP via Getty Images)
Published 13 May 2021 09:30   0 Comments

In early 1989, I was passing through Bangkok when a friend from a Western embassy invited me to what she called “a secret meeting”. She knew that I was a Myanmar-watcher, but what interested her most was the fact that I had published a couple of books on terrorism and urban guerrilla warfare. The meeting was with a senior member of the All Burma Students Democratic Front (ABSDF).

The ABSDF was founded in November 1988, after the Burmese armed forces (or Tatmadaw) crushed a nationwide pro-democracy uprising, killing more than 3000 people and driving many more across the Thai and Indian borders. Others fled north to remote areas near China. A few joined existing ethnic armed groups (EAG), but about 1000 others created their own force, soon dubbed the “Student Army” by the news media.

The group was given some arms and rudimentary training by Kachin and Karen EAGs, who had been fighting the Tatmadaw for decades. However, the ABSDF were not trusted by their hosts, who feared infiltration by government agents. Most recruits were city dwellers who found it hard to adapt to the harsh life of a rural guerrilla. Many suffered from disease and malnutrition. Some died. The ABSDF was also riven by internal disputes, one of which resulted in the execution of 15 of its own members.

A campaign of random bombings in Myanmar’s cities and towns could easily be painted as terrorism by the regime, a tag that even sympathetic foreign governments would find hard to deny.

These young men and women were driven by a hatred of the military regime which had trampled on their ideals, tortured and killed their fellow dissidents, and driven them into exile. They were determined to fight back, to avenge their comrades and to show the generals that they were not cowed by their brutality. They were also inspired by the anti-British and anti-Japanese struggles of the 1930s and 1940s, in which students played a leading role.

The “secret meeting” in Bangkok in 1989 was prompted mainly by discussions among ABSDF strategists about the tactics they should adopt in their fight against the Tatmadaw. Most members voted for a rural insurgency like those that had long been waged by the EAGs around Myanmar’s periphery. Some ABSDF members, however, favoured a campaign of urban terrorism, which they viewed as an ideal “weapon of the weak”.

It was this option that the ABSDF official wanted to discuss with me. He explained that the group was keen to declare its existence and demonstrate its resolve to the military regime, and to the Burmese people. It planned to do this through a series of bomb attacks in urban centres and around military bases inside the country. It was felt that this would force the regime to take the ABSDF and its demands seriously.

I argued against this approach. I did not believe that it would achieve the ABSDF’s aims. Indeed, it would most likely prove counterproductive. Myanmar’s population would not understand the group’s thinking, particularly if innocent people were killed or injured. It would also be a gift to the military regime, which had already branded the ABSDF as terrorists and traitors. Outside Myanmar, a bombing campaign would alienate potential supporters and make it difficult for them to argue for assistance to refugees and other exiles.

In the years following that meeting, a campaign of bombings was conducted inside Myanmar, targeting military facilities, the civil infrastructure and urban centres. Not every such attack can be sheeted home to the ABSDF, but some can. In 2001, the group was declared a terrorist organisation by the US, although Washington later granted asylum to some of its members. This designation was only lifted in 2010, after appeals from human rights groups.

All this is relevant now because a number of developments since the coup on 1 February this year reawaken memories of the 1988 uprising. A brutal military crackdown on protesters in central Myanmar has driven thousands of Burmese to the Thai and Indian borders. About 1000 have reportedly formed an armed group called the United Defence Force (UDF). Another group, the Ayeyarwaddy Federal Army, has called for volunteers to fight the Tatmadaw.

The UDF is currently receiving basic military training from a Karen EAG, but it remains to be seen what tactics it and other armed dissident groups will adopt. They may join a loose coalition of EAGs in what has been described by activists as a nascent “federal army”. However, there have already been several attacks against military bases and police stations, and dozens of small bombs have exploded in Naypyidaw, Yangon and Mandalay.

The arms used in these attacks have reportedly included rockets, stun grenades, Molotov cocktails and improvised explosive devices. The nature of these incidents, their timing and geographical distribution suggest that some elements in the opposition movement are convinced that peaceful demonstrations are futile, and that (notwithstanding Aung San Suu Kyi’s decades-long advocacy of peaceful political change) a much more violent approach is required.

One experienced observer has suggested that some of the most recent attacks may be the result of collaboration between the EAGs and pro-democracy dissidents, with the latter providing the rural-based insurgents with intelligence about their intended targets. This is possible, but members of the opposition movement have clearly conducted some attacks themselves.

Either way, Myanmar’s new military regime now needs to consider the possibility that it is facing a new kind of civil war. Before February, it had to deal with relatively well-armed and battle-hardened guerrillas in the countryside, with occasional, usually ineffectual, bomb attacks in the cities. Now there is the prospect of a coordinated campaign by the EAGs in the rural districts and attacks in urban areas from dissidents trained and armed by these groups.

Such a campaign is unlikely to topple the regime ensconced in Naypyidaw, but it would certainly stretch the Tatmadaw. The army is used to fighting on many fronts with limited resources, but simultaneous operations in different parts of the country, coupled with terrorist bombings throughout central Myanmar, would be a challenge. The generals know this, hence their efforts to divide the EAGs and buy off some (such as the Arakan Army) with separate peace deals.

As for the dissidents, it is hard to see their efforts at waging war against the military regime as being successful. Isolated attacks will not bring down the junta, nor force it to accept a more democratic government. Indeed, as I warned the ABSDF in 1989, a campaign of random bombings in Myanmar’s cities and towns could easily be painted as terrorism by the regime, a tag that even sympathetic foreign governments would find hard to deny.

Show Comments
Previous Article
Australian aid: How low can it go?
Next Article
Indonesia responds to the cyber dark side