Australia should join applying sanctions ­– and if necessary, support a no-fly zone ­– to stop killings by the junta. 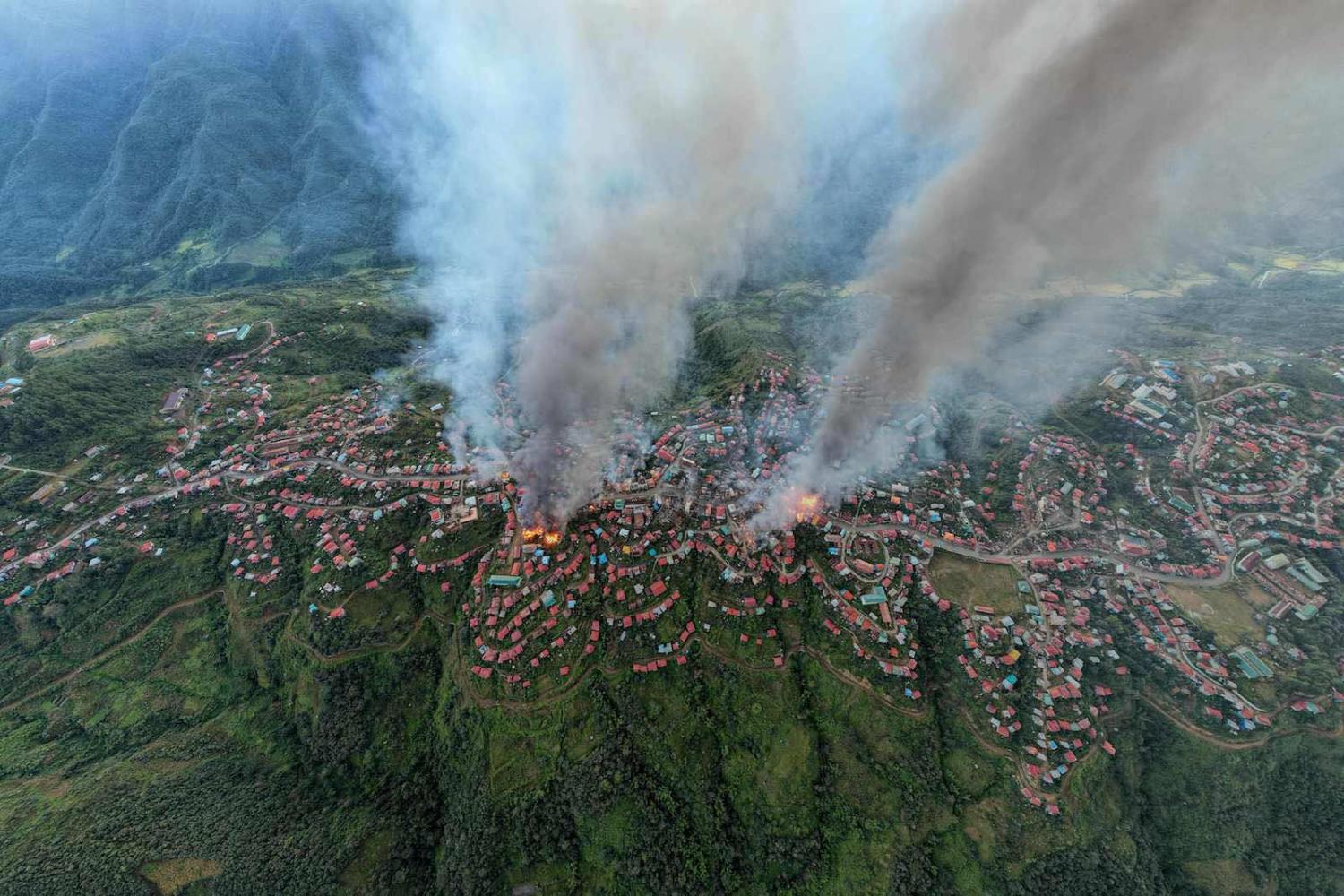 Smoke and fires on 29 October 2021 at Thantlang, Chin State, Myanmar, where more than 160 buildings have been destroyed caused by shelling from junta troops, according to local media (STR/AFP via Getty Images)
Published 17 Nov 2021

For many Australians, their first-hand experience with the military is the welcome sight of the Australian Defence Force assisting our community in times of drought, flood and fire. It is unimaginable for most Australians that in 2021, a nation’s military would embark on an overt campaign of widespread oppression, arbitrary arrest and use lethal force in an effort to control their own citizens.

Largely absent from our daily news, this is what is happening to the people of Myanmar, whose crime was to vote overwhelmingly in favour of democracy, at a general election on 15 November 2020.

Myanmar’s military – the Tatmadaw – used trumped-up charges of electoral fraud to justify a coup d’etat and reimpose an autocratic dictatorship on the nation. It is widely reported the Tatmadaw feared a democratic government would undermine military control of the lucrative business conglomerates that have long corrupted their conduct. The United Nations reported in 2019 that the revenue and influence from this network of conglomerate-owned businesses and affiliates, enrich the Tatmadaw leadership and insulate them from accountability and oversight.

In response to the coup, a sustained civil disobedience movement has grown. In the days, weeks and months since the military seized control, a broad swathe of the population, from all walks of life, have put their lives, their livelihoods, and their freedom at risk to defend their democracy. The Tatmadaw have carried out thousands of arbitrary arrests against people exercising their rights to freedom of assembly and expression. They have tortured innocent civilians and have used live ammunition to disperse protestors, killing hundreds and prompting some to join armed resistance movements.

If, however, the air-attacks continue or indeed increase under Operation Anawrahta, Australia should work with urgency to advocate with ASEAN and others for a no-fly zone – or at least an enforceable embargo on the provision of jet fuel – to be authorised by the UN Security Council.

The coup has also resulted in a humanitarian crisis and reversed the significant development gains Myanmar had made in previous years. The economic downturn and massive displacement of people has compounded the impact of Covid-19, and the threat of drought and famine. The UN estimates around three million people are in need of direct humanitarian assistance. This is a three-fold increase since the coup. Additionally, nearly half of the country’s population is living below the poverty line – a poverty rate not seen in 20 years.

As the monsoon season ends, the Tatmadaw are reported to be preparing for war – against their own people. Infantry battalions, mechanised units, armoured vehicles and aircraft are being pre-positioned at forward operating bases around the country in preparation for “Operation Anawrahta”. Observers expect the Tatmadaw to target fellow citizens in “clearance operations”.

There is a clear national interest for Australia in the cessation of violence and the restoration of democracy, which would contribute to a more stable region governed by the rule of law. Australia has supported multilateral efforts to restore peace, including Association of Southeast Asian Nations-led initiatives such as the “Five-Point Consensus” and its decision to block the Tatmadaw leader from attending ASEAN meetings. However, to date, there has been little meaningful progress for people on the ground.

Further unilateral measures will soon be a viable option for Australia. In response to a report of the Joint Standing Committee on Foreign Affairs, Defence and Trade, the government will introduce legislation to adopt a Magnitsky-style autonomous sanctions regime. Once approved by the parliament, these targeted sanctions powers should be exercised by the Foreign Minister, as a priority, to impose travel restrictions, freeze assets and restrict trade with the Tatmadaw leadership and their commercial interests. Coordinated with like-minded partners, these sanctions will have some impact, but are unlikely to prevent further atrocities from being committed.

For the people of Myanmar, diplomacy appears to have been ineffective to date. Recourse to the UN “Responsibility to Protect” may be the only viable course, albeit, the difficulties in obtaining Security Council authorisation cannot be underestimated. Russia and China have already blocked attempts to condemn the coup and they remain two of Myanmar’s biggest arms suppliers. That difficulty, however, should not stop Australia working to mobilise the international community.

On 18 June this year the international community voted at the UN General Assembly for a non-binding resolution, indicating its in-principle support for an arms embargo on Myanmar. While the Tatmadaw controlled conglomerates manufacture most of their small arms and ammunition, the raw materials are imported, as are many other weapons systems, including armoured vehicles, aircraft and helicopters.

Australia should continue working with ASEAN, other groups and nations towards UN authorised, enforceable sanctions on the sale of arms and dual-use technologies to the Tatmadaw. Where evidence is available, Australia could also use its new targeted sanctions powers against third parties who continue to supply the Tatmadaw with arms and dual-use technologies.

Finally, as a former military pilot I am aware of the overwhelming advantage that uncontested air power provides a combatant. The Tatmadaw which operates the joint China/Pakistan JF-17, the Russian MiG-29 and Mi-35 helicopter gunship among others, has employed modern airpower against civilian targets.

In April, Myanmar’s UN representative (appointed by the previous democratically elected government of State Counsellor Aung San Suu Kyi), called for a no-fly zone to prevent the Tatmadaw from killing the people of Myanmar. Hopefully international pressure and an arms embargo will lead to effective negotiations and a cessation of the violence and oppression. If, however, the air-attacks continue or indeed increase under Operation Anawrahta, Australia should work with urgency to advocate with ASEAN and others for a no-fly zone – or at least an enforceable embargo on the provision of jet fuel – to be authorised by the UN Security Council.

The possibility remains that Russia or China, even with the eyes of the world on them, may choose to exercise a veto at the UNSC. The operational challenges of agreeing and implementing measures such as an embargo or a no-fly zone are immense. Neither of these challenges, however, is a reason to refrain from actively seeking collaboration from people of goodwill from around the globe to protect the citizens of Myanmar. As Edmund Burke said in 1770, “When bad men combine, the good must associate; else they will fall, one by one, an unpitied sacrifice in a contemptible struggle.”

Senator the Hon David Fawcett is chair of the Joint Standing Committee on Foreign Affairs, Defence and Trade, and a Liberal Senator for South Australia.

The atmosphere was grim and tense but a hard-man from the IRA greeted me with: 'So, you must be a fan of Neighbours?'
Melissa Crouch 12 Oct 2020 15:00

The polls should be delayed. The danger of spreading the virus is one reason. Ongoing disenfranchisement is another.
Cameron Sumpter 28 May 2018 06:00

Greater coordination and information sharing is required for deradicalisation efforts to be effective.