With two more possible referendums, there is still plenty of talk to come about the future of the territory.

Against New Caledonia’s troubled history, Foreign Minister Marise Payne’s statement was highly appropriate, expressing Australia’s acknowledgement of the achievement by the French government and local parties in a momentous vote on 4 November. The vote is the first step of the final phase of a genuine, agreed self-determination process.

The fact of the independence vote taking place at all, the unprecedented turnout of over 80% of eligible voters, the strong participation of the young, especially young Kanaks, and the peaceful relaxed atmosphere (at least during polling hours) are remarkable enough.

But the result, 56.4% against and 43.6% in favour of independence, is a timely reminder to the three principal players ­– France, the independence, and loyalist groups – of local realities and the seriousness of the task ahead. 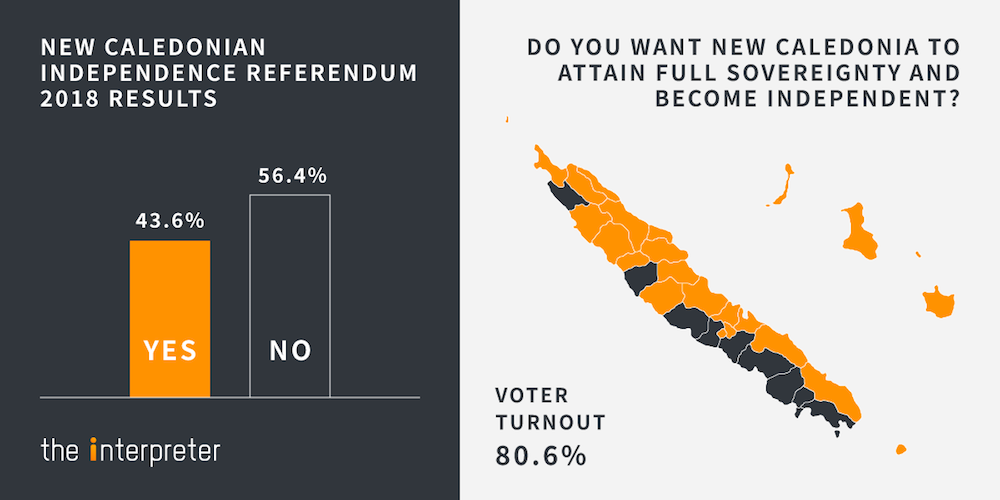 The narrow result, because it differed radically from limited opinion polling, and statements by loyalists suggesting a 65–70% win for staying with France, was reported by many as surprising. In fact, it reflects the current disposition of parties in the local Congress (loyalists hold 53.7% of the 54 seats, independence groups 46.29%).

The real significance of the result is that Kanaks turned out in large numbers and overwhelmingly voted for independence. The French State voter list showed that people of “customary status” (Kanaks) represented 46% of voters. The pattern of voting – strong turnouts and support for independence of 80–90% in Kanak heartlands – suggests that the 43.6% supporting independence were Kanak. Thus, only around 3% of Kanaks appear to have favoured staying with France.

The real significance of the result is that Kanaks turned out in large numbers and overwhelmingly voted for independence.

The Matignon/Noumea Accords which won peace on a promise of a transition phase endowing new institutions and handovers of certain powers was seen by independence leaders as giving themselves time to develop experience in economic and administrative management to prepare them for independence. It was seen by France and loyalists as a period during which they could convince independence supporters to stay with France.

The results show clearly that despite impressive efforts by France and its supporters, the vast majority of the Kanak people are not yet convinced to remain French.

As indigenous people, they are not going anywhere, and they have regional interest and support through the Melanesian Spearhead Group and the Pacific Islands Forum, the latter sending an observer team to the vote.

What does the result mean for the future?

Independence leaders negotiated Noumea Accord provisions for up to two further independence votes if the answer is “no” first time round. Provided one-third of the Congress agrees (and they have always held at least that many seats), a second vote can be held in 2020 and a third on the same basis in 2022, after which France must conduct discussions about the future.

Because all indigenous people can vote in these referendums, but only non-Kanak with longstanding connections to New Caledonia can do so, independence leaders are banking on 18-year old Kanaks becoming eligible in that period to boost their support. They worked hard on mobilising young Kanaks this time, with clear success.

Already loyalists are propounding legal change to prevent those two votes, an unconscionable prospect for independence leaders. France’s Prime Minister Edouard Philippe has reaffirmed the provisions, barring a “strong consensus” against them. The atmosphere will sharpen as parties prepare for the May 2019 provincial elections, which could reshape the political balance in this final stage of the Accord.

Since polls closed, there has been a constant round of stoning and setting fire to cars in several areas. A road blockade at historically troubled St Louis between Noumea and a wealthy suburb saw young Kanaks throwing Molotov cocktails at police, a similar incident at Paita involving gunfire. Many young Kanaks have missed out on the considerable benefits of the Accord.

Philippe flew into this uneasy situation on Monday, and reiterated his message of dialogue, convening a meeting of the Committee of Noumea Accord Signatories in early December in Paris. He put the question of economic and social inequalities at the top of the agenda, admitting that exchanges so far under the Accords had given these issues insufficient priority.

The bottom line is that, notwithstanding majority support for staying with France, the interests of the sizeable minority favouring independence who are indigenous Kanaks must be considered, hopefully around a dialogue table which will look at the final and most significant areas of difference left after the Noumea Accord transition years. To this extent, the main game becomes the discussion, albeit punctuated by two more independence votes.

At the minimum, it is to be hoped that by 2022 agreement can be reached on a new New Caledonia, one that builds on existing institutions and powers under the Accords, which it keeps, and that will meet the wishes of the loyalist and independence groups alike.

New refugee compact will struggle to live up to lofty rhetoric

Some states are likely to be cast in the role as perpetual host, while others can basically buy their way out by being a distant supporter.
Rodger Shanahan 23 Feb 2021 16:00

This is an age in which dual nationality is widespread, and problems related to alleged ISIS members were foreseeable.
Dan McGarry 19 Sep 2019 14:30