On the ballot it’s Guterres versus Horta, but also Gusmão versus Alkatiri continuing their post-independence feud. 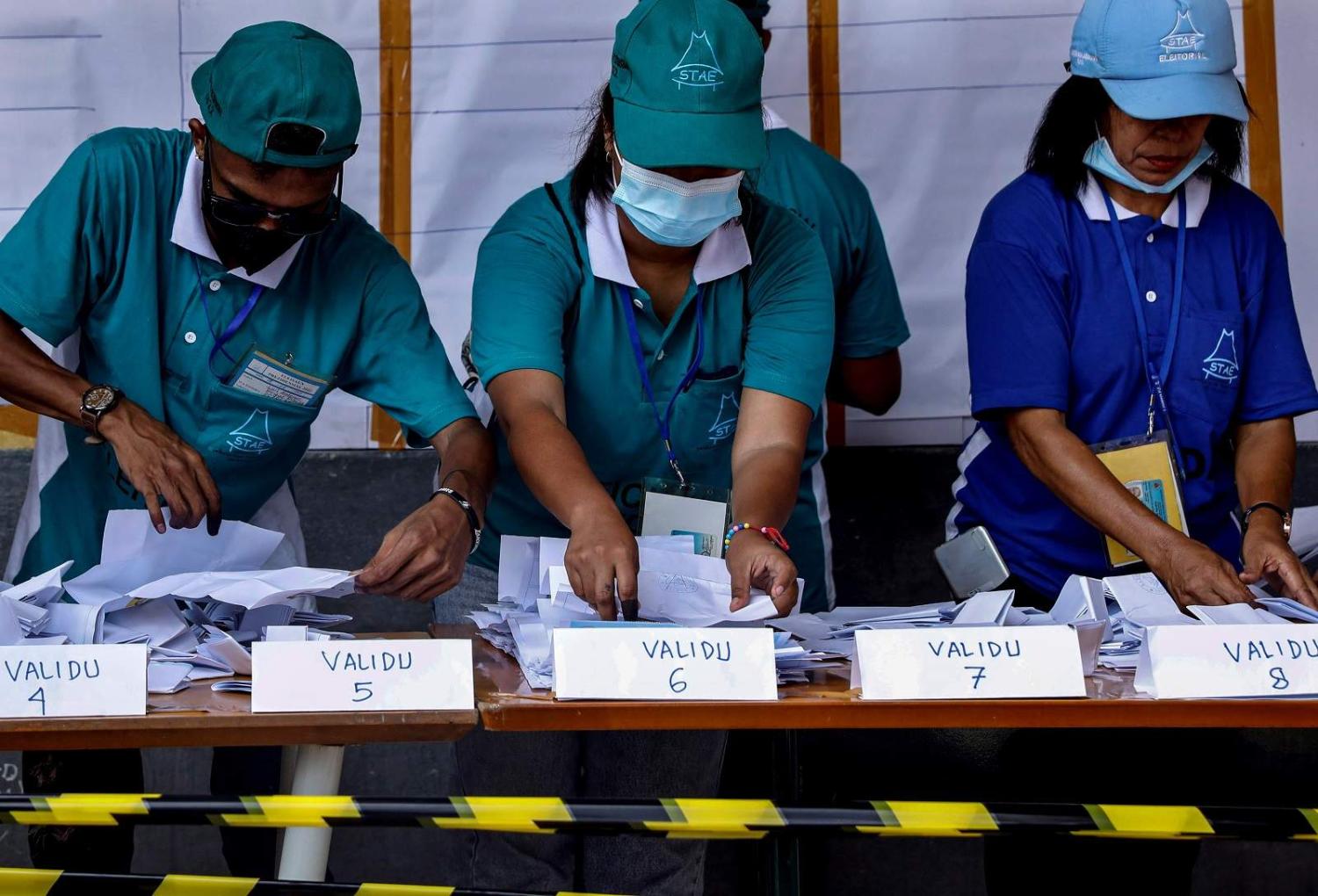 Timorese voters head to the polls again on Tuesday 19 April for the second round of the country’s presidential election. The campaign, following a first round of voting last month, pits two long-standing political figures against each other – incumbent president Francisco “Lú-Olo” Guterres and challenger José Ramos-Horta. Both are key members of the country’s small political elite, which is dominated by figures who led their country’s resistance to Indonesia’s 1975–1999 occupation.

On the surface, this looks like a simple contest between two established politicians. Look closer, however, and you’ll see that it’s also a proxy bout in the never-ending feud between the two most powerful resistance-era leaders and heads of the country’s two largest political parties – Xanana Gusmão and Mari Alkatiri. The former is backing Horta, while the latter is backing Guterres. In many ways, their relationship has defined Timorese politics since the country regained independence in 2002.

Relations between Gusmão and Alkatiri have long been contentious – some of their mutual animosity stems from the fact that the former was in the country during the occupation, while the latter was in exile outside of the country.

Gusmão, who leads the National Congress for Timorese Reconstruction (CNRT) is the country’s single most popular political leader. His popularity and influence transcend that of other resistance-era figures, partially due to his role in uniting a then-fractured resistance movement in the mid-1980s and time spent under house arrest in Jakarta in the 1990s. He served as the nation’s first president from 2002–07 and as prime minister from 2007–15. His party is currently in opposition, having been relegated out of power in 2020.

Alkatiri, who leads the Revolutionary Front for an Independent East Timor (FRETILIN), is more polarising than Gusmão, but nonetheless maintains high favourability ratings, as most Timorese political figures do. His influence stems from his role as FRETILIN’s first Minister of Political Affairs in 1975: by happenstance, Alkatiri was on travel to Mozambique when Indonesia invaded Timor-Leste in 1975, and subsequently spent the occupation in exile. He ultimately returned, serving as the country’s first prime minister from 2002–06 and again from 2017–18. FRETILIN is currently in government as part of a three-party coalition that deposed the CNRT-led coalition in 2020.

Relations between Gusmão and Alkatiri have long been contentious – some of their mutual animosity stems from the fact that the former was in the country during the occupation, while the latter was in exile outside of the country. Each has distinctly different personal styles. Gusmão is known for his charisma, while Alkatiri is a relatively quiet operator.

At times, discord between the two has single-handedly destabilised politics to the point of causing civil unrest and state breakdown. In 2006, when Gusmão was president and Alkatiri prime minister, the country nearly spiralled into civil war and requested the deployment of international peacekeepers to resolve the crisis. Violence persisted but gradually declined until peacekeepers left in 2012.

In recent years, the two have been engaged in a shadowboxing match of sorts, each trying to knock the other out of politics. Every time one of them gets knocked down – whether by the defeat of the Alkatiri-led minority government in 2018 or deposition of the Gusmão-backed government in 2020 – they get back up and throw a return punch. The stakes of their gamesmanship are further raised by two megaprojects closely tied to each of them and their families – Tasi Mane for Gusmão and the Oecusse special economic zone for Alkatiri – that are beset by stubborn viability questions and corruption allegations.

At times, their relationship has been less tense and even conciliatory; the 2017 presidential election, where Gusmão backed Guterres, comes to mind. But make no mistake – they do not get along and, particularly for Gusmão, seem set on steamrolling the other out of politics. Since the FRETILIN-led coalition came to power in 2020 – which CNRT still claims was illegal, despite court rulings to the contrary – Gusmão has agitated for a snap parliamentary election that he believes will bring him and his party back to power.

If a snap election does eventuate, the Gusmão-Alkatiri feud will be one of the defining features of it.

That’s why this presidential election is so important; it may give Gusmão the election he so badly wants. In exchange for his support, Horta promised to call a snap election and support Tasi Mane, the latter of which the current government essentially paused and Gusmão sees as his legacy. He has been a constant presence at Horta’s side on the hustings, with Gusmão’s likeness pictured on Horta’s campaign banners, shirts, and even his logo on the ballot paper. Gusmão’s support was crucial to Horta winning 46 per cent of the first-round vote and positioning him as a clear favourite to win.

Guterres, who won 22 per cent of the first-round vote, hasn’t taken his underdog status lightly, though. He is running a competitive campaign and his frequent appearances with Alkatiri and other key government-affiliated figures demonstrate the incumbent government’s unity – an important bulwark against a snap election eventuating. Left uncertain is whether Guterres has united his own party; first-round candidate and senior FRETILIN figure Lere Anan Timur has stayed on the sidelines and declined to endorse either candidate.

Much will come down to voter turnout and, in the case Horta wins, his margin of victory. A wide margin will give him a mandate to deliver on his promises, while a relatively close margin may rob him of the political capital necessary for doing so.

If a snap election does eventuate, the Gusmão-Alkatiri feud will be one of the defining features of it along with, from the perspective of both men, a zero-sum game where all the chips are down. Yes, Timor-Leste should be lauded for its progress in largely eliminating political violence and civil unrest since the 2006 crisis. But, this is just the sort of scenario that could wipe out that progress and quickly devolve into instability, violence, and more.

A selection of commentary and analysis from Lowy Institute voices on the state of affairs in and beyond the USA.
Jacqui True, Sara E Davies, Sharman Stone 3 Jun 2020 06:00

A new survey is a wake-up call for governments and organisations to direct urgent funding to women’s peace and security.
Daniel Woker 8 Jan 2018 16:20