Environmental damage and gendered violence are flashpoints on the tiny island dominated by US troops. 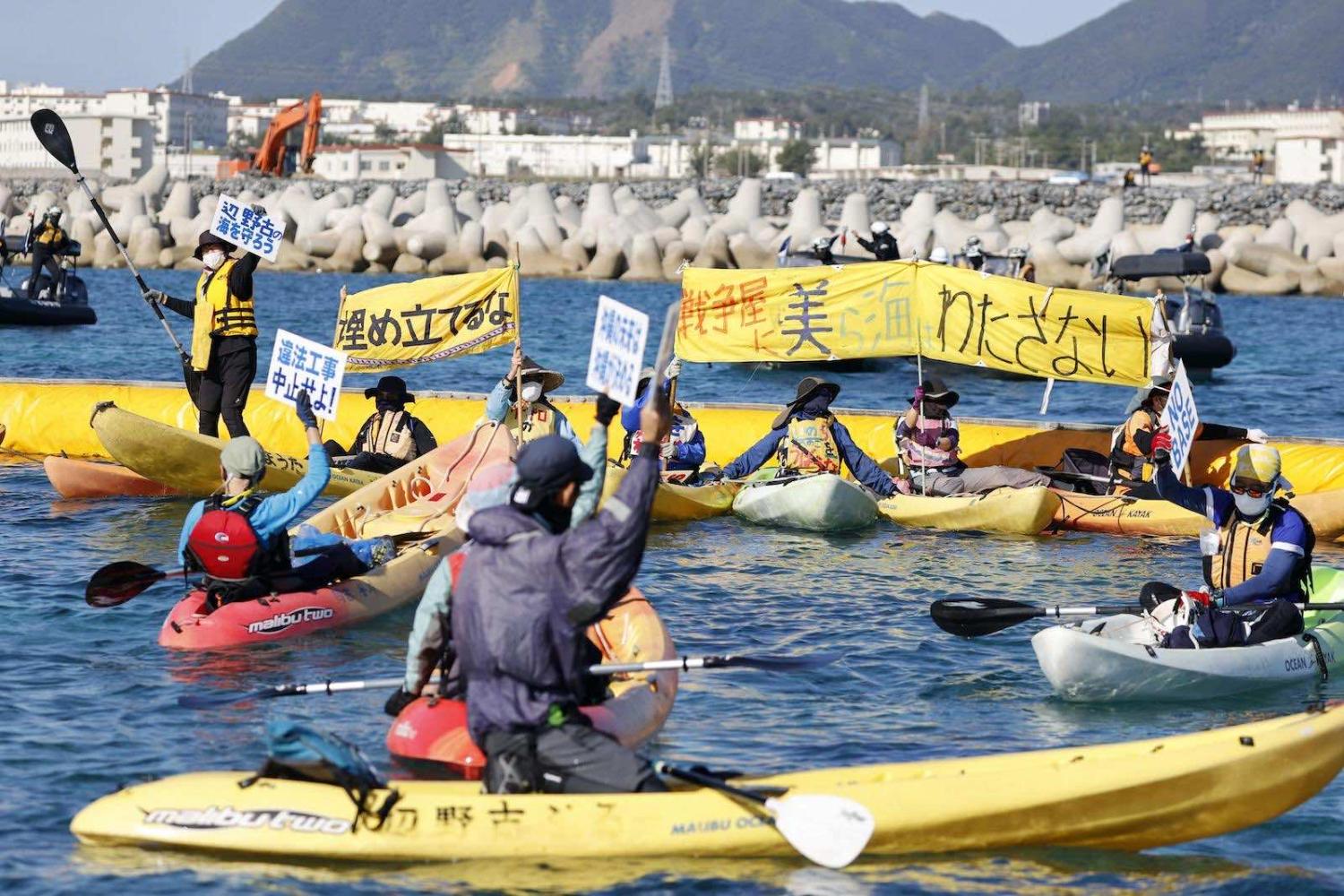 In early January this year, US military bases in Okinawa, Japan, were again the subject of criticism after the Omicron variant of Covid-19 was detected among US base personnel and subsequently spread to locals. Hostility towards the presence of the bases has existed since the 1950s and the anti-base movement in the prefecture, though not supported by all Okinawans, remains the most vocal in Japan.

The anti-base movement, which is motivated by pollution and noise associated with the bases, alongside violence perpetrated by US base personnel against Okinawans, has failed to remove any major US bases from Okinawa. Despite this, the movement has drawn attention to gender-based violence, particularly sexual violence and murder, perpetrated by US military and civilian base personnel against Okinawan women and girls, alongside environmental harms associated with the bases. Although these harms are present at US bases around the world, they are amplified in Okinawa as the prefecture, which comprises less than one per cent of Japan’s territory, houses approximately 75 per cent of US bases in Japan. The movement has also stalled the creation of a new base, garnered support from influential Okinawan politicians and ensured that the bases remain a flashpoint in Okinawa-Japan and US-Japan relations.

Japanese governments have allowed US bases in Okinawa in exchange for a US commitment to defend Japan from external attacks and have supported the bases on the grounds that they ostensibly enhance Japan's security.

During the 1945-52 US occupation of Japan, the Americans constructed military bases in Okinawa. In 1952, in exchange for an end to the occupation, Japan allowed the United States to retain control of the prefecture. Okinawa, which was initially colonised by Japan in the 1800s, remained under US administration until 1972, and throughout this period, the United States built additional military bases in the prefecture. Since 1972, Japan has administered Okinawa and has allowed US bases to remain there, in accordance with the 1960 US-Japan Security Treaty, which permits US bases in Japan.

Okinawa Women Act Against Military Violence (OWAAMV), a key feminist non-governmental organisation within the anti-base movement, has for decades conducted protests in response to cases of violence by US personnel against Okinawan women and girls. According to the organisation, from 1945-2011, 350 crimes, including sexual violence, were committed by US personnel against Okinawan women. Within Japan and around the world, OWAAMV has thus drawn attention to the gendered and harmful impacts of US bases in Okinawa alongside US militarism.

In response to anti-base protests following the 1995 gang rape of an Okinawan girl by a group of American servicemen, the United States pledged to close its Futenma base, located in a heavily populated urban area and widely opposed by locals. The US and Japanese governments agreed to create a new base near the remote town of Henoko to replace Futenma. However, anti-base protestors want Futenma closed and have opposed the proposed Henoko base, which would be partly built over coral reefs, on the grounds that it would cause pollution and encroach upon the habitats of numerous animals, particularly the endangered dugong. As a result, 26 years since the two countries announced their plan to create the base, it has only been partially constructed and, to the dismay of the anti-base movement, Futenma remains in use.

For the foreseeable future, it is unlikely that the anti-base movement will be able to significantly reduce the US basing presence in Okinawa.

The anti-base movement has gained varying degrees of support from some Okinawan governors. The prefecture’s current governor, Denny Tamaki, opposes Futenma and the Henoko project and wants to see the US basing presence in Okinawa reduced considerably. In contrast, some of his predecessors have only opposed the Futenma and proposed Henoko bases.

By engaging in regular protests and gaining support from Okinawan governors who have opposed the proposed Henoko base and sought to prevent its creation, anti-base activists have directly challenged the pro-base Japanese and US governments which have spearheaded the Henoko project. Their activism has ensured that the bases remain an ongoing source of tension in Japan’s relationship with Okinawa and its close ally, the United States.

For the foreseeable future, it is highly unlikely that the anti-base movement will be able to significantly reduce the US basing presence in Okinawa. Japan’s governing party, the Liberal Democratic Party, is a longstanding supporter of the bases, as are some Okinawans who benefit financially from their presence. Although 2022 marks 50 years since Okinawa’s official reversion from US to Japanese rule, in effect, Okinawa continues to remain a US-Japanese colony.

Of maritime security and a rules-based order

All good in theory, but the operational logistics of multinational cooperation at sea will take more than narratives.
Ben Scott 29 Apr 2020 12:00

Testing the debate with some opening assumptions about an increasingly common phrase that still fails to resonate.
David Brewster 30 Jan 2018 13:03

The Chinese navy does not intend to challenge the US Fifth Fleet – at least in the short term.