Public support for capital punishment isn’t as overwhelming and unshakeable as the government often portrays it to be. 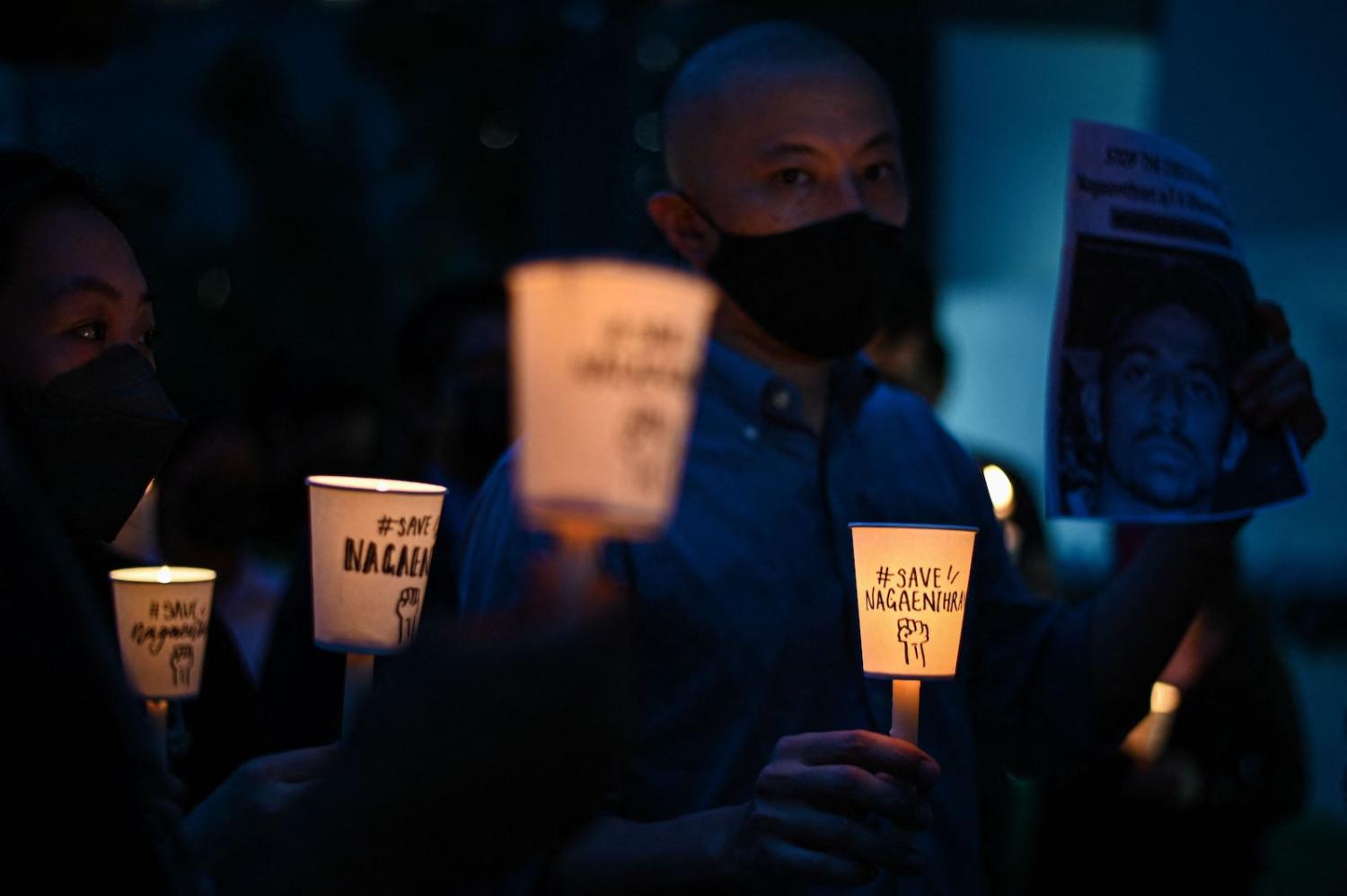 A candlelight vigil to protest the execution of Nagaenthran K. Dharmalingam in Singapore (Mohd Rasfan/AFP via Getty Images)
Published 4 May 2022     Follow @kixes

The sun baked the concrete and tarmac as mourners walked behind a hearse carrying Nagaenthran K Dharmalingam, wailing and crying out for the life that had been lost. Over 200 people attended his funeral, sending him off on the final leg of a horrific journey that had begun 13 years ago, when Nagaenthran had been arrested in Singapore and eventually charged with trafficking 42.72 grams of heroin.

Nagaenthran’s story triggered an outpouring of support and concern in the final six months of his life. Although the Singapore government has repeatedly insisted that he was not intellectually disabled – even going as far as to issue a statement to that effect on the day he was hanged in prison – it was not a matter of contention that he’d had an IQ of 69, far below the average, and that he had “borderline intellectual functioning” as well as other cognitive impairments. As far as international standards were concerned, Nagaenthran was a person with intellectual/psychosocial disabilities. When his family first received an execution notice in October 2021, informing them that he would be put to death on 10 November, people expressed shock at how cold the letter was, informing his mother in bureaucratic language about the imminent hanging of her son.

Unlike most other death row prisoners in Singapore, Nagaenthran’s case attracted the attention of the international press. People followed its twist and turns, through desperate late-stage court applications to the surreal stay of execution that came after he tested positive for Covid-19, making him somehow too sick to kill. An online petition urging the President of Singapore to grant him clemency garnered over 100,000 signatures. Solidarity letters were signed by people from multiple sectors, from healthcare workers to professionals within the legal industry. When the Singapore government ignored our pleas and executed him anyway on 27 April, many Singaporeans showed up at the wake the mourn him, bringing flowers and cards and handwritten messages of support for his family.

The breadth of support for Nagaenthran that materialised within a very short period was not something I’d seen before as an abolitionist in Singapore. In 2010, the family of Yong Vui Kong – who has since been re-sentenced to life imprisonment – had also gathered over 100,000 petition signatures, but it had taken them weeks of canvassing in the streets of Singapore and Malaysia to reach that number.

Nagaenthran’s psychosocial disabilities made his case a particularly sympathetic one. Even people who were not necessarily against capital punishment agreed that a vulnerable person like him should have been spared. But that alone cannot account for the increase in support for abolition, and the shift in discourse on the death penalty in the country that is underway.

On 3 April, a protest against the death penalty drew a crowd of about 400; three weeks later a vigil for Nagaenthran and another death row prisoner, Datchinamurthy a/l Kataiah (originally scheduled for execution on 29 April, but who later received a stay of execution) had a similarly strong turn-out. Unlike the campaigns on which I’d worked on a decade ago, which had tended to focus on the specifics of a particular case, the participants of these protests demanded not just pity and mercy for a specific person, but complete abolition of the capital punishment regime. Placards and chants zeroed in on systemic oppression and exploitation, pointing to the intersections of race, class and structural inequality. People did not hesitate to describe death sentences as murder and state violence, and to call for an end to the killing.

The fact that people are showing up and taking action not only grows the movement, but also has a deep and lasting impact on the loved ones of those on death row.

Singaporeans, usually assumed to be protest-averse and politically passive, are also coming forward to act on their convictions. Ahead of executions, multiple people have personally delivered letters to the presidential palace, seeking pardons for death row prisoners. The night before Nagaenthran’s execution, a small group of Singaporeans gathered outside Changi Prison despite a heavy police presence, writing messages and saying prayers for a man they had never met, but whose humanity they recognised and cared for.

While it is true that most Singaporeans are still in favour of the death penalty, a comprehensive public opinion survey conducted by academics has shown that this support isn’t as overwhelming and unshakeable as the government often portrays it to be. Abolitionist sentiments and conversations have emerged on social media platforms despite being largely excluded from local mainstream media coverage. The government still insists that the death penalty for drugs is an effective deterrence, imposing their own interpretations of public opinion surveys to push that claim. But a growing number of Singaporeans are now questioning and challenging, even directly rejecting, this dominant narrative.

The impact of such expressions of support cannot be understated. While still in the minority in terms of overall public sentiment in the country, the fact that people are showing up and taking action not only grows the movement, but also has a deep and lasting impact on the loved ones of those on death row. Family members often feel silenced, intimidated and humiliated by the stigma attached to having a relative on death row – public demonstrations of solidarity show them that they are not alone in their fight. In recent years, my conversations with families have evolved. Where they used to focus only on the specifics of their loved one’s case, family members now express much more concern for every other case on death row, and repeatedly state the need for complete abolition of the death penalty.

Nagaenthran’s death caused much pain and suffering, particularly for his family, but also for many Singaporeans who had desperately wished for him to be spared. Many people will need time to process their shock, disappointment, anger and grief, but the anti-death penalty movement presses on. We have no other choice. Although Datchinamurthy, who lived in the cell next to Nagaenthran’s, managed to win himself a stay of execution, such stays are only temporary, and multiple prisoners are at risk of imminent execution. While we did not succeed in keeping Nagaenthran alive, the support his story garnered for the abolitionist movement now represents hope for many others.

Death of a Russian ultranationalist

What is the effect of the death of a Russian ultranationalist? Unfortunately, more of the same, it seems.
Sidney Jones 19 Oct 2017 12:05

After Hapilon’s death and the ‘liberation’ of Marawi

Marawi won't be truly liberated until it's safe for displaced residents to return.
Paymon Azmoudeh 28 Sep 2022 03:00