A modernisation plan and now Covid-19 threaten a vivid cultural symbol and the livelihoods that go with it. 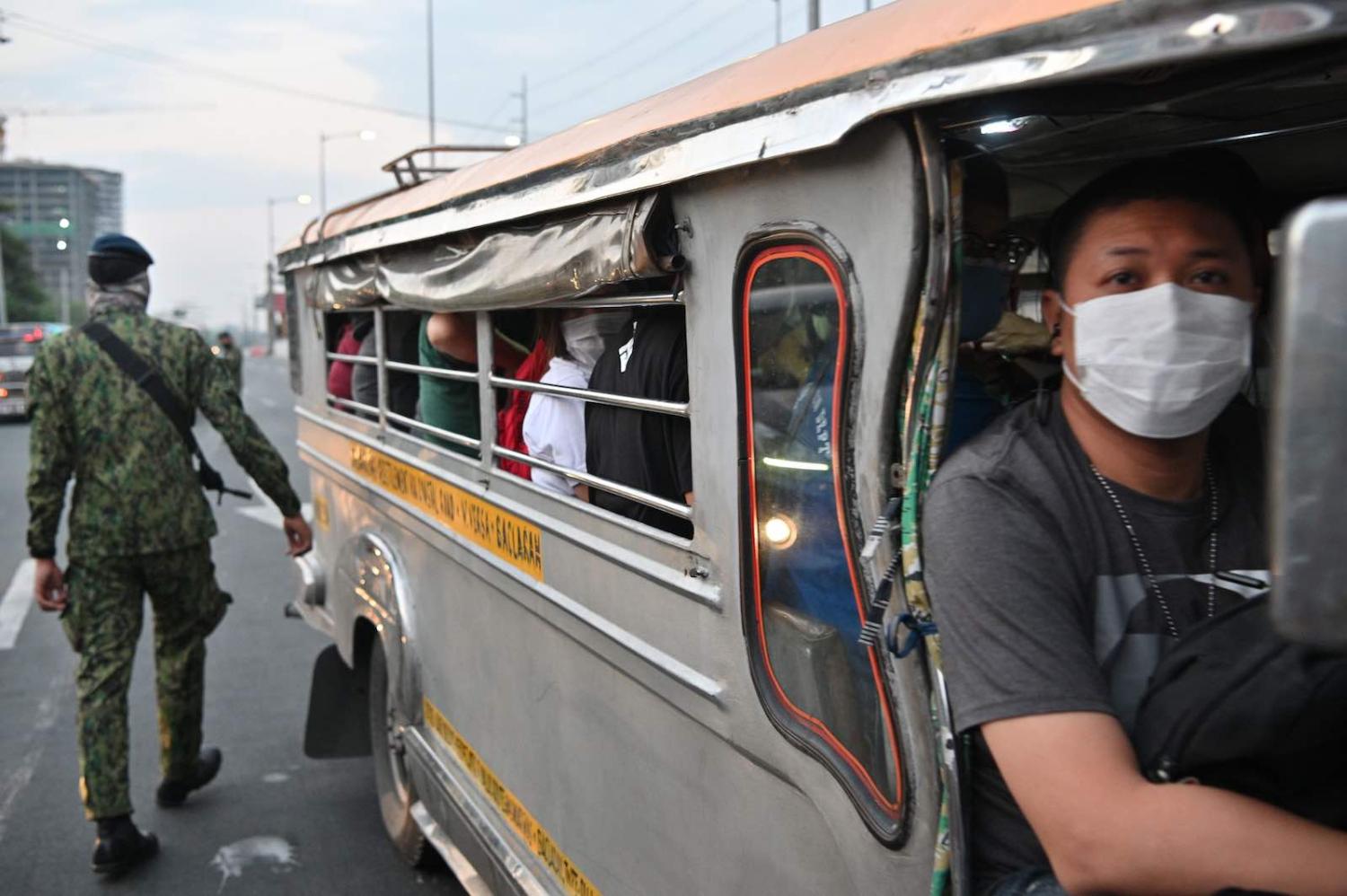 A policeman inspects a jeepney at a checkpoint in Manila, 15 March 2020 (Ted Aljibe/AFP via Getty Images)
Published 13 Jul 2020

After almost four months of lockdown measures due to Covid-19, the Philippines government in June eased restrictions for the majority of the country. But even as public transport systems slowly got back to running, something was missing: the distinctive jeepneys, still banned from plying their trade.

On June 24, Land Transportation Franchising and Regulatory Board Chief Martin Delgra announced that “traditional jeepneys” would be allowed on the road the following week in Metro Manila, where the majority of jeepneys are used. Two days later, however, the office of President Rodrigo Duterte backpedalled, stating that only “roadworthy” jeepneys – the qualifier unclear – would be accepted.

So far, only 49 jeepney routes out of more than 900 existing ones have been allowed to reopen in Metro Manila. That’s roughly 8% of 74,000 jeepneys back on the streets. And without any reliable source of income for months, packs of jeepney drivers can still be seen begging on the streets and voicing their calls to bring back their livelihoods.

The jeepney is an icon of Philippine roads, breaking the sameness of cars and buses with over-the-top decals and a long, open-air passenger area. More importantly, it serves as the cheapest and most accessible form of transportation for the commuting public. Each vehicle carries up to 20 passengers, charging just 16 US cents for a 5-kilometre trip. But these mechanical mammoths – dubbed the “Hari ng Kalsada”, or King of the Road – have been targeted by the government’s “modernisation program” since 2017.

Despite a denial of pushing for a phase-out, the state backing of “modern jeepneys” and actively preventing the homecoming of the familiar King of the Road tells a different story.

Headed by the Department of Transportation (DOTr), the plan is premised on replacing many jeepneys running on old and rundown engines with new, greener models. Since the inception of the plan, Philippine officials have encountered regular criticism from transport and commuter groups calling the move “anti-poor” and a “corporate capture”.

One of the country’s biggest transport groups, Piston, is a vocal opponent of the program. While not against the modernisation plan per se, they remain critical of the provisions that insist jeepney drivers and owners cover the costs of the program’s requirements – including engine replacement. According to the group, prices of replacement units start at more than US$30,000 (A$43,000). That’s a tall order. A single unit owner or driver’s capital stands at around $3,800 to $7,690, going by industry standards. Piston estimates that some 650,000 drivers and 250,000 operators are at risk of losing their jobs permanently to “profit-driven modernisation.”

Is the government using the pandemic as a springboard to fully exact their modernisation scheme?

Presidential spokesman Harry Roque attempted to allay such fears, saying that now, amid the crisis, is not the time for modernisation. In spite of those words, however, there were telltale signs of a jeepney phase-out. Most modes of transportation were operational by the end of June, to some degree. On the same day the DOTr initially announced a road reappearance of jeepneys, they also made it clear what their priorities were. Jeepneys were pegged at the bottom of the public transport ladder, due to passenger proximity and health precautions. Trains and buses were at the top, followed by coaster vans, the state-promoted “modern jeepneys” (fitted with air conditioning, new engines and Wi-Fi), motorised tricycles (in some cities) and then the “traditional” jeepneys. On the agency’s Facebook page, disparaging remarks and videos against common jeepneys have been routinely posted, while touting the modern jeepney as a vehicle for the future.

Independent think tank Ibon Foundation disputed the notion of jeepneys being more vulnerable to transmission of the virus as a basis for the prohibition, pointing out that jeepneys are actually at an advantage because open-air vehicles offer better ventilation.

The most blatant sign of the government preventing the comeback of jeepneys has been its treatment of the drivers themselves. Most come from low-income backgrounds and earn about US$6 to $8 per day. Drivers strapped for cash have increasingly been seen on roadsides carrying signs for spare change. Invoking physical distancing rules, the police responded with arrests. In June, six members of Piston were jailed after protesting the government’s forced jeepney phase-out and demanding aid. They were charged with holding a mass gathering in violation of quarantine. Ironically, upon their release, tests revealed that two of the detained had contracted the disease while incarcerated.

With reports of ailing and starving families of jeepney drivers rampant, support through food and cash donations poured in from various corners of civil society and the general public. Towards the end of June, however, some groups engaged in the relief effort alleged harassment and threats of arrest by the police. On 27 June, a solidarity day for jeepney drivers was held, even while maintaining distancing. Food packages were collected at various sites in the city, and others used the occasion to protest the criminalisation of drivers. Police were deployed around the city and were reportedly intimidating participants.

Despite a denial of pushing for a phase-out, the state backing of “modern jeepneys” and actively preventing the homecoming of the familiar King of the Road – through both policy and police harassment – tells a different story. The fight for survival amid the pandemic is not over. But while everyone reels from the global repercussions, the administration of Rodrigo Duterte looks eager to use it as an opportunity to drive the last nail into the jeepney’s coffin.

Meanwhile, the rest of the world adjusts to uncertainty in no small part fuelled by the incumbent US President.
Erin Cook 22 May 2018 15:00

The UN's nuclear weapon ban is a landmark treaty, but there are some serious problems with the text.