In the Philippines, a political dance around constitutional change

Quite literally a cha-cha. 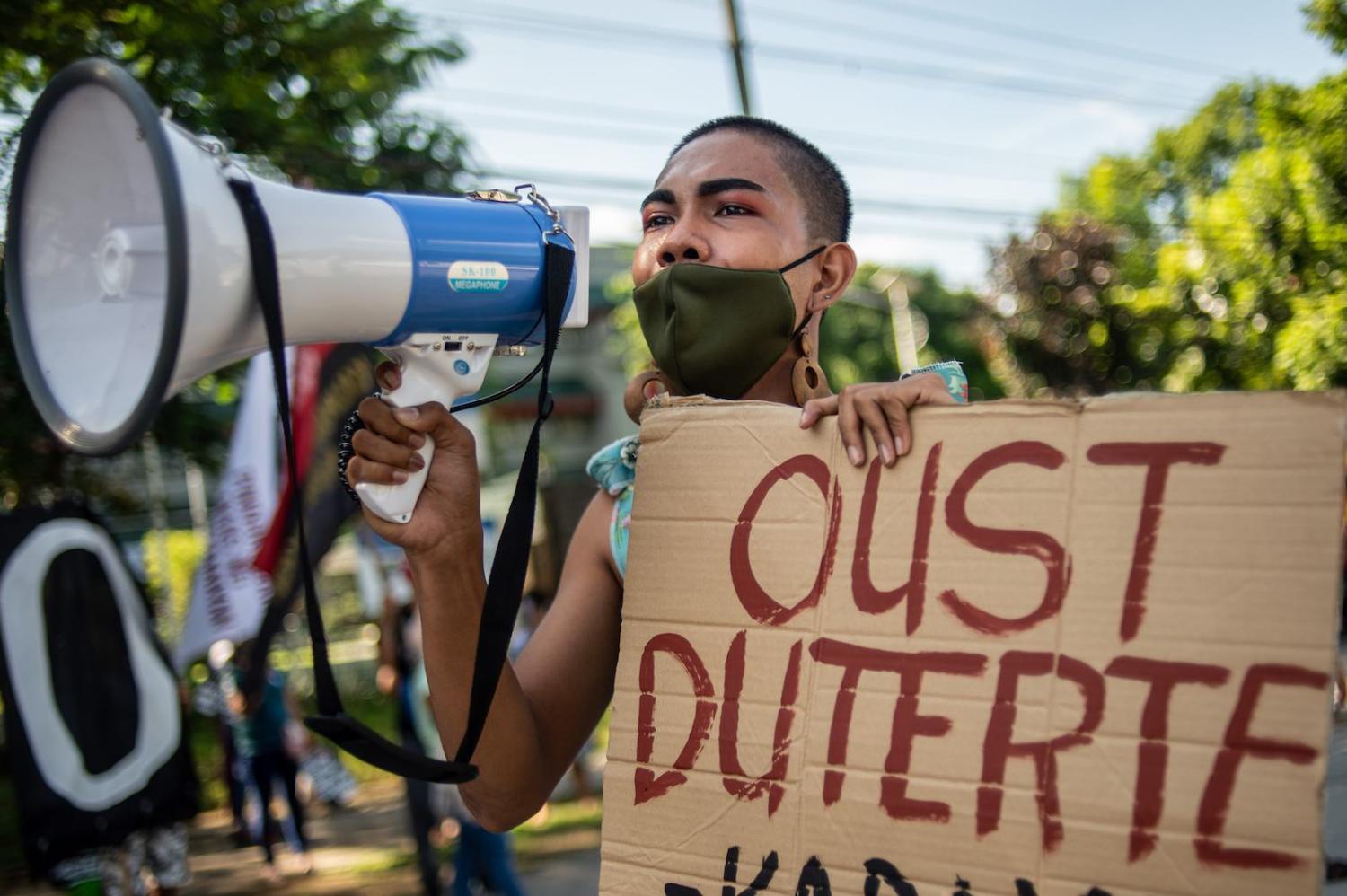 A protester in a demonstration ahead of President Rodrigo Duterte’s State of the Nation Address in Quezon City, Philippines, 27 July 2020 (Lisa Marie David/NurPhoto via Getty Images)
Published 7 Aug 2020

The Philippine House of Representatives opened the second regular session of congress last month, with some legislators looking to kick-start the controversial process of amending the constitution. Charter change – or “cha-cha”, as locals put it – has been part of President Rodrigo Duterte’s thrust since he came into power.

The current constitution, ratified in 1987, was produced after the tumultuous and draconian Marcos dictatorship of the 1970s and 1980s. Its provisions specifically created the single six-year presidential term, along with other safeguards to unchallenged leadership. It is a key document to mark the country’s shift away from open autocracy. So any attempt to revise it can be easily portrayed as a political power grab.

Duterte seems more intent than his predecessors in pursuit of charter change. While all four presidents before him have, in one way or another, proposed cha-cha, Duterte has been its most vocal and frequent endorser. He and his political allies have made five attempts already – all met with public backlash and eventually retracted.

One proposal is to extend terms for elected officials, prompting fears around accountability and process. Yet are such concerns warranted? This month, the Department of Interior and Local Government (DILG) unveiled a petition by more than 1400 mayors clamouring to lift the term limits for city leaders. While this does not apply to their national counterparts, it signals an open call for splicing the charter. The DILG, however, has tried to allay such fears by denying that the term-extension proposal would extend to the president. However, Congressman Rufus Rodriguez also said this month he plans to call for a meeting of the constitutional amendments committee of the House to discuss how best to proceed.

If a motion to include term extensions is approved, it effectively cancels the upcoming 2022 elections. After that, all bets are off.

More importantly, once the constituent assembly (congressional and senate representatives collectively responsible for deliberating on amendments) is convened, any and all pronouncements on maintaining checks and balances can be left aside. In other words, no legislator is officially bound to keep their promises. If a motion to include term extensions is approved, it effectively cancels the upcoming 2022 elections. After that, all bets are off.

What makes it different this time – and more likely to succeed? The pandemic.

Covid-19 has made the bad worse and made our nightmares a real possibility. Since the virus and lockdowns hit, the Duterte administration has managed to push through a number of schemes previously held back by public outrage. They have rid jeepney drivers of their livelihoods, in favour of newer transport vehicles. They have given Duterte emergency powers, passed the controversial anti-terrorism law, outlawed major protests, shut down a major broadcasting station critical of political leaders, and effectively turned the country into a police state – all under the guise of dealing with a public health crisis.

The pandemic is the best thing to ever happen to their political aspirations. Lifting term extensions could well be the next one in their sights.

The timing could not be worse for Filipinos desperately looking for adequate responses from the state in curbing the crisis. The country continues to grapple with the pandemic, with Covid-19 cases now at more than 113,000. Officially, the Philippines now has more patients than China, with just 7.6% of the population. Yet even at this critical juncture, Duterte and his allies seem more concerned with self-preservation and political consolidation than with public health and social assistance.

In the past few months, clamour for the ouster of Duterte has reached a fever pitch. The noise online and on the street grows, as the hashtag #OustDuterte remains a daily trend on social media, various unaligned and neutral members of society are speaking up, and – despite quarantine bans on mass gatherings and police threats on demonstrations – crowds have turned up to denounce the government. In light of all this, gertting rid of elections would be the surest way to maintain the current crop of officials for the foreseeable future.

There is some hesitation, however, from Duterte’s allies. House Speaker Alan Peter Cayetano professed that tackling cha-cha might best be reserved for January, when the spread of the virus has perhaps been curbed. Duterte himself has made no endorsement of the proposal in any of his speeches. At his State of the Nation Address at the opening of the House, he preferred to praise China and champion the possibility they might produce a coronavirus vaccine.

Pandering to Beijing has been another distinct feature of this presidency. The administration’s cha-cha proposals align with that approach, as part of the much-touted economic provisions include opening up the country’s assets to greater foreign ownership and control. China is already the country’s leading trade partner, and cha-cha would only bolster that partnership.

Duterte’s dictatorship, or the rise towards it, has been well documented, as have the plans for cha-cha. Will they wait until January, or will opposition mount a fight to thwart the move yet again?

What is certain is that what feels like an ill-timed move for the population is an opportune moment for the administration to strike at cementing the status quo.

Previous Article
A force to combat climate change?
Next Article
A Chinese-built airport next door to a key Australia-US naval base?

Our complicated relationship with China and the implications of President Trump for Australia have eclipsed thoughtful reflection on the Australia-Japan relationship.
Hugh Piper 10 Sep 2021 06:00

Treasurer Josh Frydenberg has made explicit Australia’s challenge. The next step is ensuring business knows the plan.
Joanne Wallis 21 Jun 2021 14:00

Becoming tangled in power politics can create divisions between – as well as within – nations across the region.