Towering over low shops and French colonial–era townhouses grows a new city in tribute to the politics of the present. 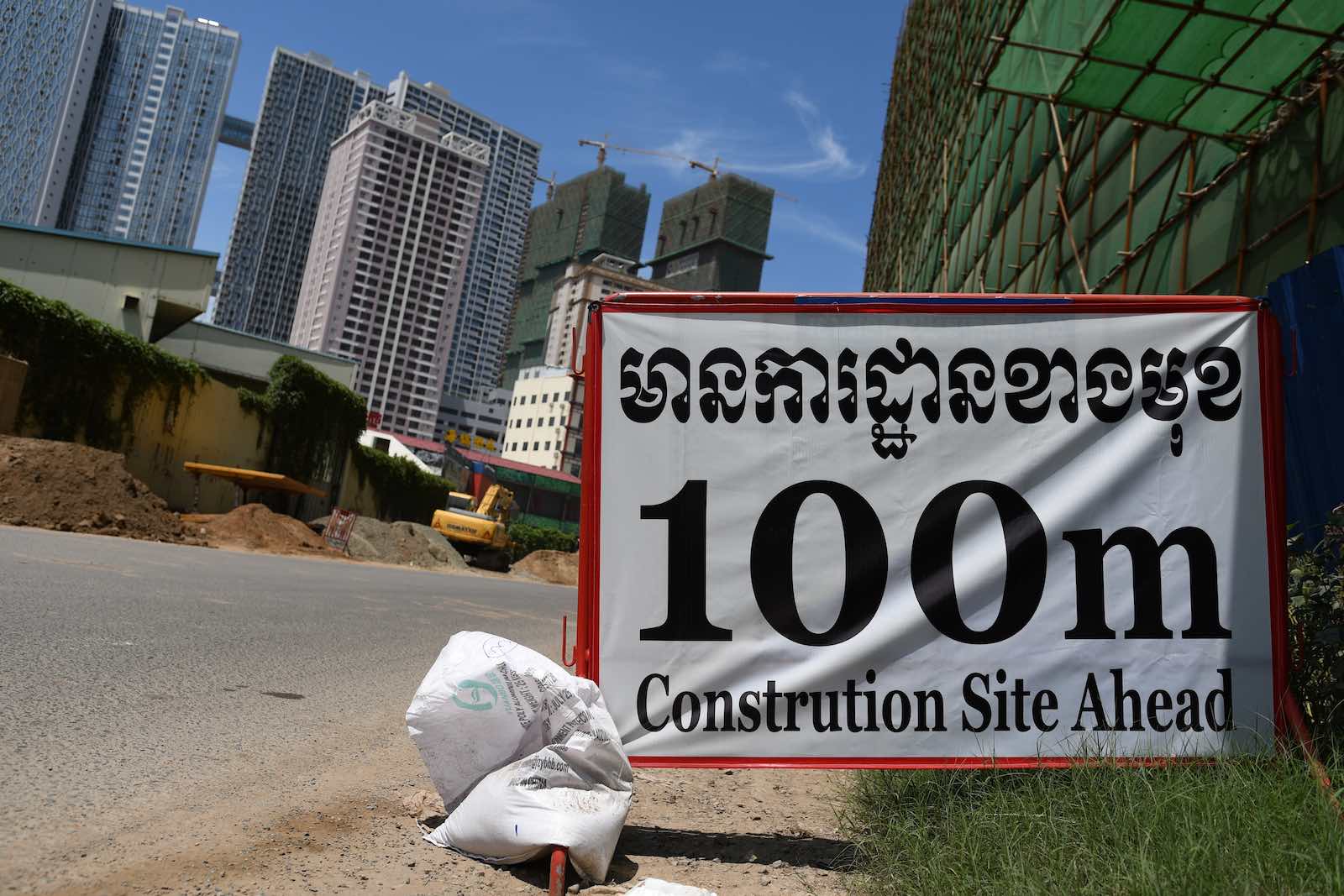 Occasional road-signs to warn passers-by does not do justice to the intensity of construction seen in the Cambodian capital (Photos by Simon Roughneen)
Published 5 Nov 2019 06:00   0 Comments

Phnom Penh was long known as a relatively low-rise city, at least compared to towering neighbours such as Bangkok, Jakarta, Ho Chi Minh City, and Singapore. These cities all saw their skylines shoot up in recent decades – long before Phnom Penh’s belated boom – as their country’s economies expanded and modernised.

Cambodia, too, has seen heady economic growth over the past two decades, rarely dipping below 8%. Yet the ravages of war and foreign occupation from the late 1960s until at least the early 1990s meant catch-up for the capital’s skyline did not come until midway through the current decade.

Over the past four or five years, hundreds of new or under-construction apartment blocks, hotels, and offices have soared over the old town’s three- or four-storey shophouses and French colonial-era townhouses, with the country’s construction sector expanding at 7% or more a year over the time.

The building boom arguably epitomises Cambodia’s increasingly close diplomatic and economic alignment with China – by far the biggest source of investment in the country’s US$24.5billion GDP economy. Cambodia nonetheless relies on Western markets for its garment and footwear sales, with 39% of Cambodia’s total 2017 exports going to the European Union, and 21% to the US, compared with less than 7% to China, the source of 40% of Cambodia’s imports. But the building boom appears to be driven by an influx of Chinese capital and visitors, with investment from China making up anything between 18% and 30% of the annual investment totals in Cambodia, including domestic investment, since 2012.

The 2 million Chinese visitors for 2018 also represent the single-biggest influx for Cambodia’s vital tourism sector, and a prime mover for many of the new hotels being built, with around 60% of FDI last year going to the construction, real estate, and tourism sectors, according to World Bank estimates, and bringing with it warnings of a foreign-funded construction bubble that could burst should China’s economy slow further.

Also getting in on the building boom is Cambodia’s ruling party, the Cambodian People’s Party, which is putting up a huge new headquarters on one of Phnom Penh’s busiest thoroughfares, just down the road from the Thai and Japanese embassies. Led by Prime Minister Hun Sen – himself one of the world’s longest-ruling heads of government – the CPP won all 125 seats going in 2018 parliamentary elections that were widely dismissed as farcical, after the main opposition Cambodian National Rescue Party was forced to disband the year before and its leaders either jailed or exiled. It all arguably makes the imposing new CPP nerve centre a fitting visual metaphor for the party’s ruthless dominance of Cambodian politics.

Workmen’s clothes dry in the baking midday sun inside the construction site of the new Cambodian People’s Party headquarters in Phnom Penh. All over the city, workers sometimes stay at the building sites they work on, sleeping, cooking, cleaning in what becomes a second home for a time, until the job is done and it’s time to move on to the next site.

Safety rules and regulations seem to be optional at many of Phnom Penh’s building sites. Here, labourers fill wheelbarrows with cement while wearing flip-flops and trainers or runners, rather than the protective steel-capped boots that are mandatory on most building sites elsewhere, while only one of the workers seen here is wearing a safety helmet.

Some of the hundreds of construction sites towering over Phnom Penh and as seen from the roof of the Japanese-built Aeon Mall, itself a relatively-new building, having only opened in 2014.

Several of the bigger new high-rises going up over Phnom Penh. Many of the new buildings, as suggested by the banner draped on the photo on the left, are Chinese-backed, but other foreign investors are getting involved, with Singaporean developers backing the “The Peak”, which will be 55 storeys when finished and will incorporate a mall, hotel, and apartments.

The occasional road sign warning passers-by that a construction site lies ahead does not do justice to the intensity of construction seen in the Cambodian capital. Along this 300-metre stretch outside Aeon Mall in Phnom Penh, there are in fact not just one but four construction sites of varying size and in varying states of completion.

Construction workers rushing to finish for the day as the sun drops in the late afternoon sky. These photos show the site of a new Novotel, a French chain with almost 500 hotels across the world. This hotel is going up about 300 metres from Wat Langka, a 600-year-old temple landmark in Phnom Penh and one of the few old buildings that will be left – many were already destroyed by the Khmer Rouge regime – standing in the shade of the towering new edifices that will loom over the city.

Phnom Penh’s Olympic Stadium is yet to host the Olympic Games, but remains a city landmark and stage for major sports events. The stadium was built in the 1960s and was designed by renowned architect Vann Molyvann, who died aged 90 in 2017. Known as “the man who built Cambodia”, Molyvann’s repertoire and style was influenced by older Khmer designs, such as those seen in the country’s many ancient temples, a markedly different aesthetic to the high-rises under-construction that now loom over the arena.

Show Comments
Previous Article
China’s slam dunk of the NBA is a game changer
Next Article
October in Syria: Podcast out now