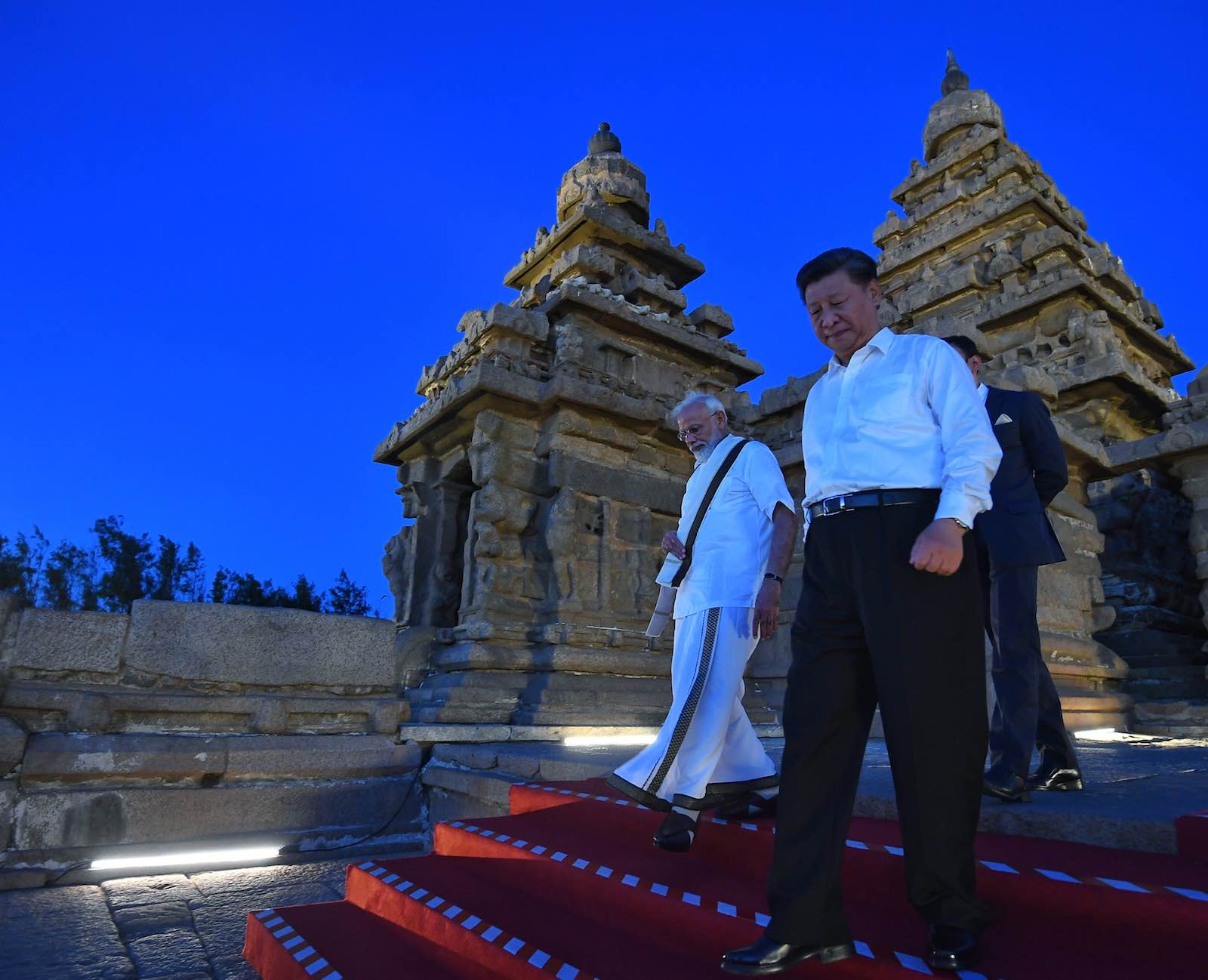 You may have seen photos in recent days of Indian Prime Minister Narendra Modi hunched over a beach, picking up rubbish. While the images presented an opportunity for media to write about ocean pollution, there was actually an even bigger event at play: an informal summit between India and China. Modi took time out from speaking with his Chinese counterpart Xi Jinping in a southern Indian beach town to go “plogging” (and be filmed while doing it, naturally).

Plogging at a beach in Mamallapuram this morning. It lasted for over 30 minutes.

Also handed over my ‘collection’ to Jeyaraj, who is a part of the hotel staff.

Let us ensure our public places are clean and tidy!

Let us also ensure we remain fit and healthy. pic.twitter.com/qBHLTxtM9y

Rubbish on the beach is something Modi can control, but finding common ground with India’s behemoth neighbour is a little more out of reach. The weekend summit, the second in a series of informal meetings between the great Asian powers, must have been at least a little uncomfortable.

The current thorn in the side of the relationship is Kashmir, with China throwing its support behind ally Pakistan in August, after India revoked the special status granted to Kashmir, along with cutting off communications (the blackout largely remains in place, two months on). Beijing raised the issue in the United Nations Security Council and invited Pakistani Prime Minister Imran Khan for discussions. This visit came just two days before Xi travelled to India, resulting in a joint statement saying that meetings were “marked by traditional warmth, mutual understanding, and strategic trust”, and that China feels that Kashmir should be “properly and peacefully resolved based on the UN Charter, relevant UN Security Council resolutions and bilateral agreements.”

At the same time, long-running conflict over border disagreements, simmering tensions over trade, and China’s habit of investing heavily in port facilities in countries surrounding India, all continue to plague relations. Ahead of last year’s summit in Wuhan, the first in the series, a military face-off at Doklam plateau along the China-Bhutan border caused some early strife, mercifully resolved during the meeting. 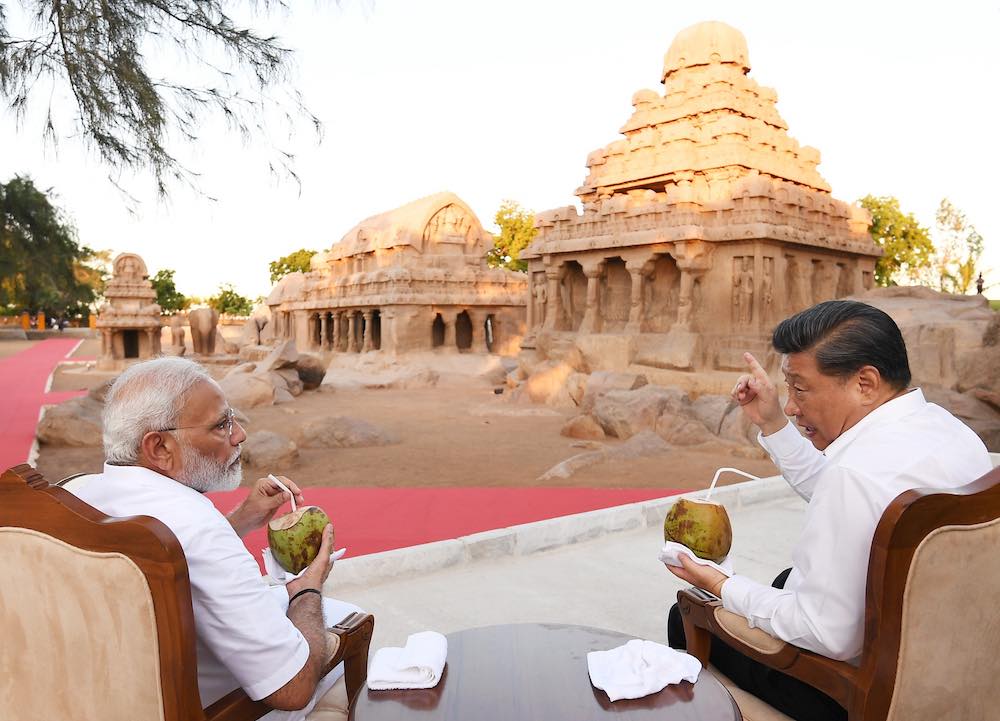 By all accounts, over the weekend the two leaders opted to forgo rancour and focus on shared goals. According to an Indian government spokesman, Kashmir was not discussed during the meeting, which was held in the Tamil Nadu temple town of Mamallapuram. Instead, the two leaders agreed on a mechanism to address trade concerns, as well as plans to cooperate on issues such as counterterrorism.

Charting a way ahead is a discerning move for the two; after all, there is a lot to connect them. Apart from their shared border, both countries are home to ancient cultures, to multiple ethnic groups, and the occasional tense self-determination movement. Both are helmed by men with authoritarian reputations. And both are steadily moving up the global power indices, albeit at different paces. There is also a long history of contact and trade, both maritime and via the Silk Road. In particular, Buddhism was brought from India to China in the first century CE. Chinese scholars and monks are known to have studied in the ancient Nalanda University, while Chinese coins have been found in Tamil Nadu. India was the first non-communist nation to establish diplomatic ties with the People’s Republic of China in 1950.

With two leaders who have built an image of towering strength, it is easy to see how rapprochement on any big issues is unlikely for a small meeting such as this.

Yet tensions abound. From India’s view, one of the more pressing issues is China’s maritime activity. The “string of pearls” theory posits that China is working overtime to build facilities in countries surrounding India, effectively encircling it and ready to “choke” its neighbour. China has invested in ports in Cambodia, Myanmar, Sri Lanka and Pakistan, along with facilities in other countries. The ports are in line with China’s oil shipping lanes, however India – increasingly joined by other nations ­­– is deeply wary of China’s plans. The Indian Ocean is home to vast amounts of trade, including around a majority of China’s oil imports, which pass through the Straits of Malacca, making access to the straits vital.

In response, India has developed its Look East policy, a strategy to improve relations with Asian nations including South Korea, Philippines, and Japan, in a bid to hedge against China’s might.

Another issue is that of borders. There are two separate areas of contention: one is Aksai Chin, an uninhabited high-altitude desert region lying between Kashmir and Xinjiang, while the other is on the other side of India in Arunachal Pradesh, which China claims as Lower Tibet. India claims that these regions were allocated to India by British India, and agreed to by the semi-autonomous authorities in Xinjiang and Tibet a century ago, although China disagrees. Both sides, however, are willing to maintain the status quo and leave a final decision on the borders for some time in the future.

Trade is another sticking point. There are strong economic links between the two, with trade tipped to cross $US100 billion by the end of the year. The scales are tipped in China’s favour, however, something that India would like to redress. India wants greater access to the Chinese market to boost its exports and decrease the trade deficit.

Combined with two leaders who have built an image of towering strength, it is easy to see how rapprochement on any of these issues is unlikely for such a small meeting. Perhaps that is why the biggest news to come out of the summit was Modi’s beach stroll and plog: a situation that no doubt pleases him.