Men comprise 90% of the country’s police, and a common complaint is male officers pay scant attention to women’s issues. 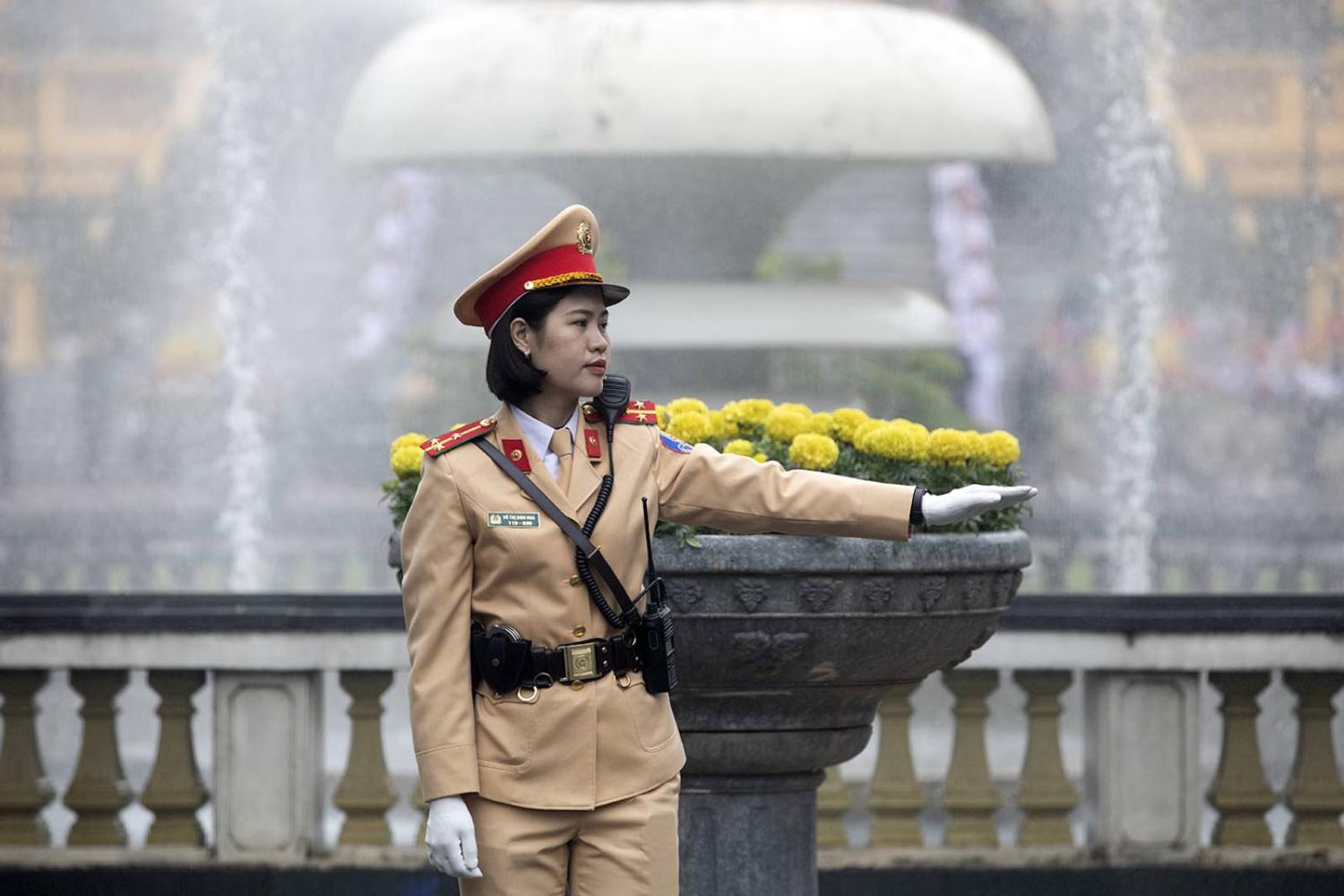 Visitors to Vietnam’s premier police training institution are greeted by a statue of the country’s first president Hồ Chí Minh with his right hand raised and the index finger gently pointing as if to convey an important lesson to the audience.

Vietnam has a reputation for valuing education, and this is often associated with its rapid economic growth. It is also reflected in the way the country is the fourth-largest source of foreign students in Australia.

Vietnam’s Ministry of Education recently upped the stakes in the research and teaching fields, introducing a regulation which requires publication of research in English, meaning international peer-reviewed journals. This move is intended to improve research standards, foster more international collaboration, and contribute to the country’s development.

But an aspect of the learning culture that is little known outside the country is the emphasis on tertiary education inside the one-party state’s public security forces.

Indeed, the People’s Police Academy in Hanoi – where the statue of the man known as Uncle Hồ stands – aspires to be one of the country’s top universities, offering high quality teaching and research for Bachelor, Master, and Doctoral degrees in policing, law, and public administration.

Last month, at an Academy conference on improving the forensic science training which drew on local and international experiences, more than 60 papers were submitted. With an audience of more than 80 and many papers presented orally, it was an interesting demonstration of how the Academy is trying to boost its credentials as a university at the forefront of forensic sciences teaching and research.

But in an example of how old-school security culture still exists, Vietnamese police delegates received a printed copy of all papers bound together, while the international delegates only received a pocket-size booklet with short summaries. When I requested a copy of the full set, I was told they weren’t for foreign viewing – despite some being submitted in English.

Two days later, I attended the dissemination workshop of an Australian Department of Foreign Affairs and Trade funded capacity-building project to support women in Vietnam’s political leadership, which is being run by the University of New South Wales and the Hồ Chí Minh Political Academy.

In contrast to the brick-size hard copy of research at the Police Academy, this research will (largely) be distributed digitally. The preference for hard copies of government documents in Vietnam is due to an absence of sustainability policies on reducing paper usage and also to reduce the potential circulation of public security information with an unnecessarily low threshold for confidentiality.

Instead of pursuing the common development-aid approach of providing scholarships to police to study research degrees in Australia, a more cost-effective approach would be to provide funding to support research training within the educationally ambitious Police Academy.

But the new Education Ministry regulation is having an impact on the ability of Academy lecturers to gain promotion, given certain positions now require publications in English. Indeed, leaders from police training centres in Vietnam often say they would appreciate Australian support to increase their research quality and output.

One of the holes in the state-led police training curriculum is the absence of much focus on family violence, despite it being a problem in the fast-changing economy. In this context, the community is also demanding more from government, including the police. Efforts to improve the specific safety and security needs of women in Vietnam are mostly led by non-government and international agencies.

This presents an opportunity for the Australian government to combine several agendas in the bilateral relationship, which has been upgraded to a strategic partnership to reflect Vietnam’s role as an economic and strategic interlocutor. Vocational education and training and women’s empowerment are key themes in Australia’s aid to Vietnam. Yet women’s employment in the security sector is limited and affects the state’s ability to respond to women’s security needs.

But instead of pursuing the common development-aid approach of providing scholarships to police to study research degrees in Australia, a more cost-effective approach would be to provide funding to support research training within the educationally ambitious Police Academy.

Crucially, the Academy oversees recruitment and in-service tertiary and vocational training for police nationwide. Research training could be focused thematically on sexual and gender-based violence, human trafficking, or other topics which must include a gender perspective and gender-disaggregated statistics and provide practical recommendations for addressing the issues identified.

The outputs could be tied to changes in curriculum and police practices for which there is some quiet appetite within the public security system culture. The work between UNSW and the Hồ Chí Minh Political Academy is a good example of how a skills-building collaboration with practical aims to increase female representation in politics and public administration is a strategic investment.

While the benefits would need to be monitored over the medium to long term, they could include greater transparency, evidence-based policing practices, increased international collaboration, and potential partnerships with local non-government organisations on gender issues.

With men comprising 90% of the country’s police, a common complaint from women is that the male officers do not pay enough attention to women’s issues.

But if research which takes these gender issues into account is tied to prospects for publication and subsequently promotion within the new education rules, maybe male police leaders will pay more attention after all.

The island countries stand to benefit from any improvement in relations between two big development partners.
Kaz Ross 29 Jan 2021 11:30

The Covid pandemic and anti-CCP fervour have brought together some unlikely allies.
Hunter Marston 12 Apr 2018 07:00