“Predatory cult”: the shadow of Unification Church over Abe’s funeral

Researcher Sarah Hightower explains Japan’s reckoning over the influence of a controversial sect in Japanese politics. 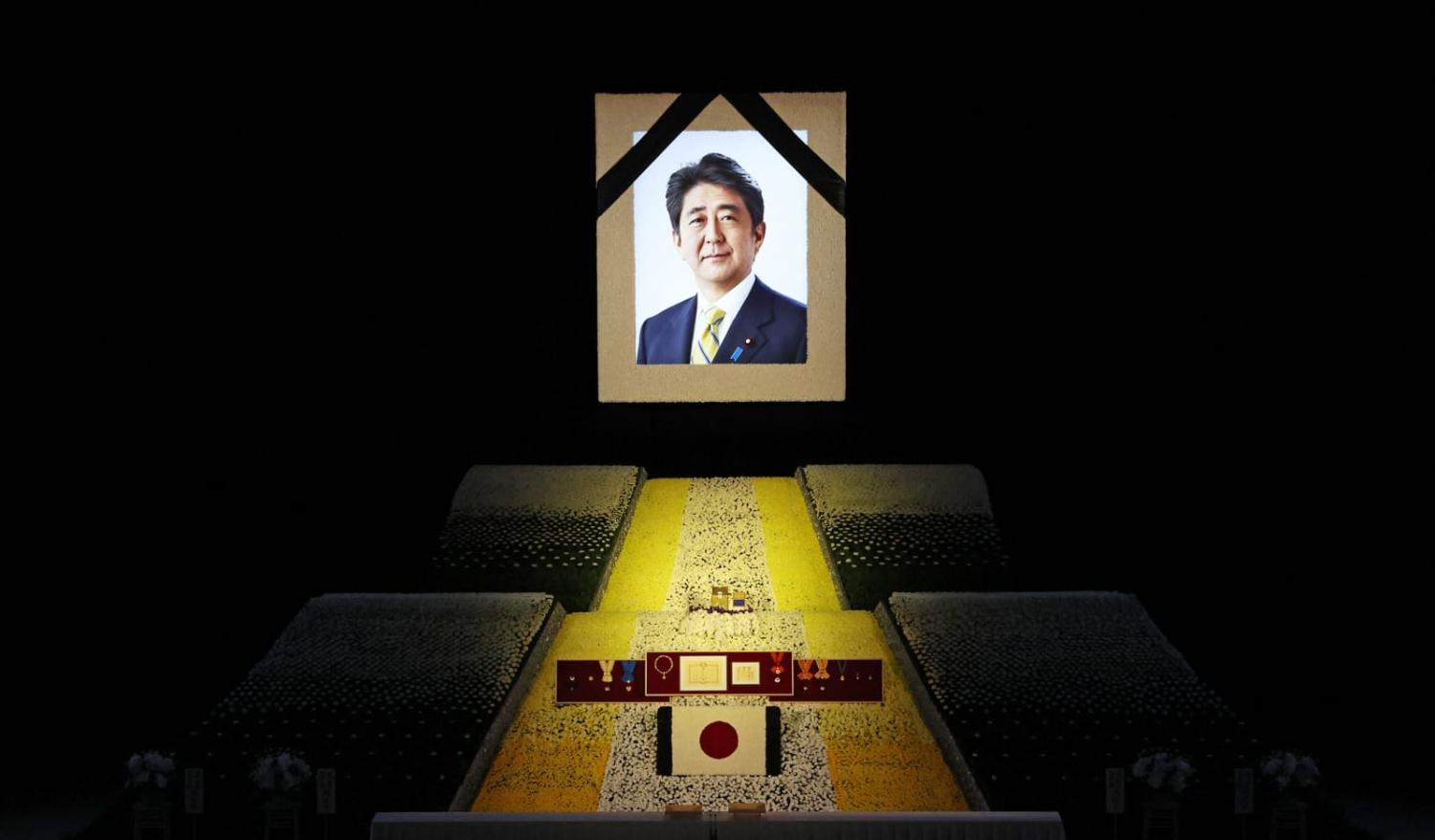 Abe’s assassin professed no issue with either the former prime minister’s politics or international engagement, but claimed to be motivated by Abe’s association with religious movement the Unification Church (Takashi Aoyama/AFP via Getty Images)
Published 28 Sep 2022     Follow @arcanakhalil

After the assassination of Japan’s former prime minister Abe Shinzo, his life and legacy have been largely celebrated abroad but mired in controversy at home.

Internationally, Abe is better known as the Father of the Quad, an active and essential strategic partner balancing China in the Indo-Pacific region during his time in power. However, his assassin, Tetsuya Yamagami, professed no issue with either Abe’s politics or international engagement. Instead, he claimed his motivation to be Abe’s association with a cult-like religious movement called the Unification Church, an organisation he blamed for destroying his family.

It is Abe’s and the Liberal Democratic Party’s association with the Unification Church that has shadowed his state funeral and opened up a broader conversation in Japan about the harm the Unification Church has inflicted on its members through its exploitative practices and its connections and influence over Japanese politics.

Hightower says the Unification Church found fertile ground in Japan because it could play upon Japanese guilt for its occupation of Korea and imperial war crimes, offering a path of salvation.

Abe’s assassination was shocking, not only because political violence is relatively rare in Japan, but because knowledge of the Unification Church and its association with Japanese politics was not openly discussed and relatively unknown outside a handful of experts, anti-cult activists and impacted communities.

To help understand this movement, I turned to Sarah Hightower, an independent researcher of cults and extremist movements, with a particular focus on their manifestations in Japan. Hightower spoke to me about the Unification Church’s emergence during the Cold War, its beliefs and its association with Abe and the LDP.

The Unification Church was founded by Reverend Sun Myung Moon in Korea in 1954, and as Hightower explains, it is a “messianic, utopian sect” with Christian overtones that combines post-war politics with appeals to family values centred on a charismatic cult-like figure. Although it started in South Korea, it has adherents all over the world and grew particularly in Japan and connected with conservative right-wing political movements and figures.

Hightower says the Unification Church found fertile ground in Japan because it could play upon Japanese guilt for its occupation of Korea and imperial war crimes, offering a path of salvation for not only its adherents, but a path to cleanse the sins of ancestors. It also appealed to conservative family values and concerns about Japan’s demographic decline.

But in so doing, the Unification Church and its adherents, also known as the “Moonies”, would often exploit believers, including forcing donations from its followers, thereby acting not so much as a religious movement but a predatory cult.

In her assessment of the church, Hightower references Takashi Yamaguchi from the Japan Society for Cult Prevention and Recovery, who says that “Japan has acted as an ATM of sorts for what the Korean operation was doing.” The Unification Church is accused of using these donations to seed a multibillion-dollar international business empire that enriches its leadership.

Although the church’s political influence remains murky, Abe’s assassination has spurred greater scrutiny by the Japanese public and galvanised the efforts of anti-cult organisations and activists.

But the church is not only a fringe cult-like movement. It cultivated ties to the political class and became a vehicle for anti-communist efforts. And that is where its association with Abe began. Hightower explains that during the Cold War, the church became so successful that the Korean Central Intelligence Agency decided they could utilise it to fight the spectre of communism. As she puts it, “the Unification Church could use this wave of anti-communist sentiment to make inroads with groups and other religious organisations and political organisations”. This allowed the church to fundraise, proselytise and increase its influence.

Even though Abe was not a member, Abe’s family, beginning with his grandfather Nobusuke Kishi, had formed a political partnership with the Unification Church based on anti-communist, anti-Chinese sentiments. Hightower says that “this working relationship has lasted throughout the decades” as Abe and the LDP continued to use the Unification Church to mobilise volunteers and voters into a prominent supporting and voting bloc.

While it’s clear that the LDP benefited politically from such support, it’s less clear what benefits the Unification Church accrued from its political connections. Or if the Unification Church has been able to exercise significant influence over the LDP, and by extension Japanese governance? This, according to Hightower, is the “million-dollar question” that Japanese society is now grappling with.

If you have a large global organisation worth billions of dollars who’s been scratching your back and you’ve been scratching their backs for decades, I don’t think it’s out of the question to ask how much influence did they have? … We don’t really have an answer right now.

This is part of the broader reckoning in Japanese society over the role of the Unification Church within the country as evidenced by the controversy and protest surrounding Abe’s state funeral. An internal investigation by the LDP is reported to have found that roughly half the 379 parliamentarians had some connection with the church.

And while the focus has been on the church’s ties to Japanese politics, Hightower notes that the Unification Church has cultivated links with right-wing parties and figures globally, including the Republican Party in the United States, starting in the Nixon era. But she also points out that the church also claimed former Democratic president Barack Obama among well-wishes for the founder Moon. The Unification Church has had uncanny success at having high profile figures and world leaders attend and speak at their conferences and events.

Although the church’s political influence remains murky, Abe’s assassination has spurred greater scrutiny by the Japanese public and galvanised the efforts of anti-cult organisations and activists, bringing much needed attention to the survivors of movements and cults such as the Unification Church and others.

Hightower’s passionate advocacy for victims of cults and extremist movements is equal to her knowledge of the movements themselves. She cautions against focusing on the sensationalism of Abe’s assassination or on the intrigue around the Unification Church’s political influences without incorporating or understanding victims’ perspectives.

Previous Article
The president vs the judge: How Kiribati came to a constitutional standoff
Next Article
Buying the wrong submarine

The hidden epidemic in the shanty towns of Honiara

Diarrhoea is a killer in Solomon Islands, and climate change will only increase its danger.
Dhruva Jaishankar 10 May 2018 06:00

The India–China summit in Wuhan was no reset

The meeting between Modi and Xi was not a step towards a lasting thaw in relations between Beijing and Delhi.