Judicial independence and access to justice is at risk as judges face deportation and suspension from office. 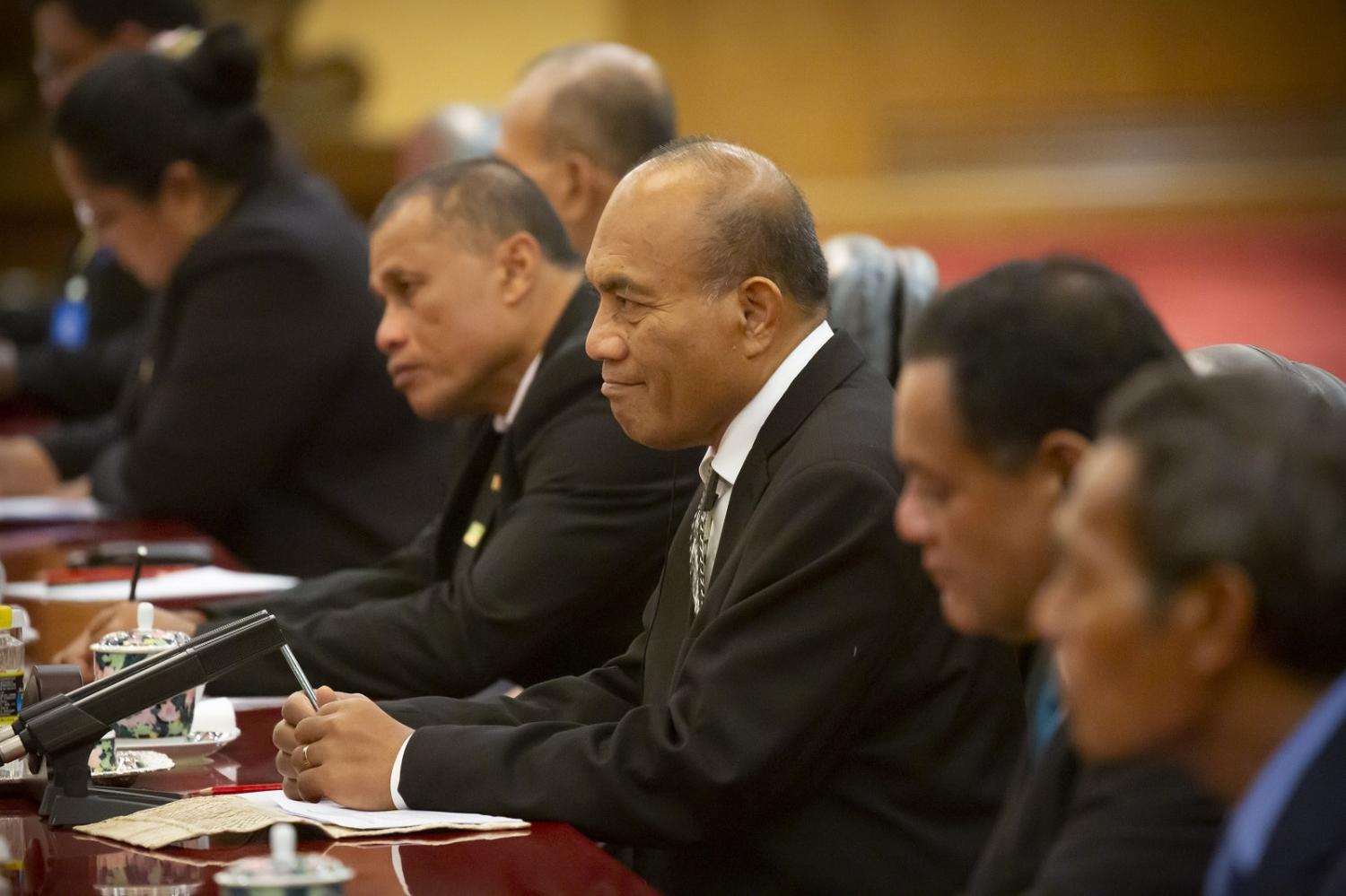 Since early September, Kiribati has been without any judges serving on its superior courts. Chief Justice William Hastings and Justice David Lambourne of the High Court, and Justices Peter Blanchard, Rodney Hansen and Paul Heath of the Court of Appeal have all been suspended pending formal proceedings for their removal from office on the grounds of inability or misbehaviour.

How did it come to this, and what does it mean for the judiciary and its relationship with the institutions of government in Kiribati?

At the same time [as the borders were closed during the Covid-19 pandemic], Kiribati’s parliament passed legislation that required all judges, new and existing, to be appointed for fixed terms.

At the heart of the issue is a dispute between the government, led by Beretitenti (President) Taneti Maamau, and Lambourne, an Australian citizen who has lived and worked in Kiribati for many years. Lambourne was appointed a judge in 2018, but no term of appointment was specified in the instrument of appointment signed by Maamau.

When Kiribati closed its borders during the Covid-19 pandemic, Lambourne was out of the country. Despite repeated efforts, he was refused a place on repatriation flights. He was told he would not be allowed back until he signed a contract that retrospectively fixed the term of his judicial appointment at three years. At the same time, Kiribati’s parliament passed legislation that required all judges, new and existing, to be appointed for fixed terms.

In November 2021, Chief Justice Hastings in the High Court of Kiribati held that the legislation was invalid; that Lambourne had been validly appointed for an indefinite period; and that executive actions to retrospectively limit his term or deny him entry to Kiribati were inconsistent with the constitutional principle of judicial independence.

A series of reprisals followed. Lambourne was suspended and a tribunal established to investigate complaints that he had engaged in misbehaviour. When this process was challenged in court, the Chief Justice was also suspended before he could hear the substance of the case. A week after the Court of Appeal found in favour of Lambourne on appeal, the three appellate judges were also suspended for what the Office of Te Beretitenti said was a “violation of their Oath and legally binding Custom and Traditions … by awarding David Lambourne with a life-time judgeship”. The executive has continued its attempts to deport Justice Lambourne, despite court injunctions.

It seems that Lambourne has been targeted because his wife, Tessie Lambourne, is leader of the opposition. In this political dispute, the judiciary has become collateral damage. The executive has demonstrated it is willing to exercise the constitutional power of suspension not for serious misbehaviour or incapacity, but because it does not agree with the court’s decisions.

Judicial independence and the rule of law have been undermined as the executive refuses to comply with court orders regarding the deportation. The institution of the judiciary has been eroded, which not only means that the people of Kiribati do not have access to justice, but that a key mechanism of government accountability has been removed. This is significant: in the past, the Kiribati judiciary has been a pragmatic actor in Kiribati’s system of government, providing advisory opinions to clarify ambiguous constitutional provisions to facilitate governance. Such constructive checks and balances on power are unlikely under current conditions.

Concerns about the executive’s (mis)use of the power to suspend judges would arise if the judges were foreign or not.

The Beretitenti has foreshadowed the appointment of an Acting Chief Justice, but whether any judge will be, and will be seen to be, independent is open to question in a context in which threats of suspension against individual judges are so readily acted upon.

The fact that the judges involved in this crisis are foreign judges is part of this story. Kiribati’s superior courts have long been constituted by judges from Australia and New Zealand as well as from other Pacific states and common law African countries. As former President Anote Tong has noted, the use of foreign judges is accepted by the Kiribati community. In the current context, however, the fact the judges are foreign has enabled some of the government’s rhetoric against the judges as “neo-colonial” actors “pursu[ing] their own interest” rather than acting in the interests of the people.

Concerns about the executive’s (mis)use of the power to suspend judges would arise if the judges were foreign or not. However, events in Kiribati show how the use of foreign judges introduces fault lines which, without care, can compromise judicial independence.

The first is the vulnerability of foreign judges to deportation, an issue that has arisen not only in Kiribati, but in the past also in Nauru, Timor Leste and Vanuatu. As non-citizens, foreign judges rely on the executive government to grant them a visa to enter and stay in the country, a status that can often be removed by exercise of discretion. Chief Justice Hastings’ judgment of November 2021 contains one of the strongest statements that balances the sovereign power of states to control entry and the protection of judicial independence when he held that the government’s discretion over visas must be exercised in a way that is consistent with the Constitution and the “special position” of a judge.

Many have expressed concerns over the government’s conduct towards individual judges and the judiciary as an institution.

The second concerns the practice, common across the Pacific, of appointing foreign judges for short renewable terms. It is at the centre of the dispute in Kiribati. The Beretitenti has said that it was by mistake that no term was specified in Lambourne’s appointment, and that the “lifetime” appointment granted to him by virtue of the court’s decisions is “unknown and alien to Kiribati”. The High Court and Court of Appeal, on the other hand, have refused to countenance attempts by the executive to retrospectively limit a judge’s appointment, as improper interference with judicial independence. Short-term renewable appointments are a red flag for judicial independence. They provide a convenient way to remove judges seen as politically unfavourable. They also raise the concern that judges will be influenced, or will be seen to be influenced, to decide cases in the interests of those responsible for renewing their appointment.

It is sometimes said that such concerns are not so acute for foreign judges, on the assumption that because foreign judges are usually retired judges with a judicial pension or seconded from courts at home, they will be disinterested in the prospect of renewal. This assumption does not hold in all cases, however: Lambourne is one of several examples of judges who, while non-citizens, have made a Pacific jurisdiction their home and the primary site of their legal careers, and for whom security of tenure, as well as residence, is acutely felt.

Many have expressed concerns over the government’s conduct towards individual judges and the judiciary as an institution. Parliamentarians are conducting public meetings and contemplating a no-confidence vote, while a range of international agencies have called on the government to protect judicial independence and the tenure of judges. The government has rejected international commentary as biased and sensationalised, but the concerns of the parliament and the people – those who are directly affected by the constitutional disharmony – will be much harder to ignore and will be critical in the resolution of this crisis.

Serbia’s decision to cancel a lithium mine in the face of environmental outcry underscores a modern economic challenge.
Andrew Nachemson 2 Apr 2019 10:30

The military already stacked the odds in its favour, and suspicion about missing ballots have only compounded doubts.
Graeme Smith 10 Oct 2017 17:26

The Han-opticon: The hazards of China research in the Xi era

Librarians should pause before pulping dusty Chinese journals tucked away in compactors. They may be the only ones left.