The US may force the Philippines’ (willing) hand

A visit by VP Kamala Harris has revitalised a military pact and shown how Bongbong Marcos views America’s regional role. 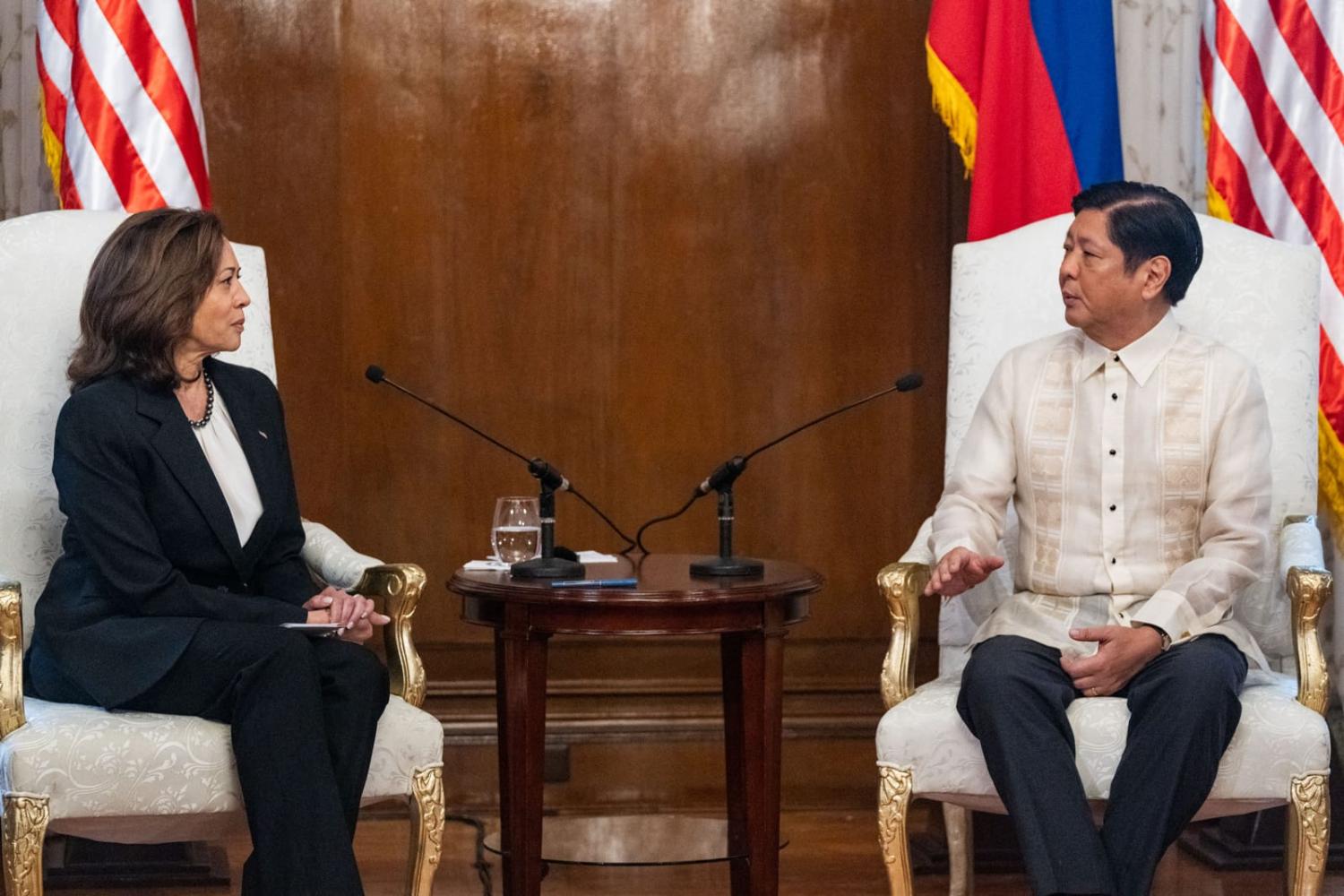 US Vice President Kamala Harris’ recent two-day trip to the Philippines makes her the highest-ranking official from the Biden administration to visit the country. Harris got straight down to the business of letting the region know who has been the sheriff in these parts for the better part of the post-war period.

Harris met with President Ferdinand “Bongbong” Marcos Jr then flew to Palawan province, close to waters of the South China Sea currently contested by China and the Philippines. In front of the gathered navy and fisherfolk, she reaffirmed the unwavering support of the United States in the face of Beijing’s “intimidation” and “coercion” in the territorial row.

The White House touted the “ironclad” relationship between the two countries as exhibited by the 2014 Enhanced Defense Cooperation Agreement (EDCA), which allows American troops to operate in a number of Philippine military facilities. The Biden administration also announced a doubling of the shared bases, an injection of US$82 million for EDCA, and that more is on the way.

Former president Rodrigo Duterte, barring his affinity for Donald Trump, stood out for his rocky relationship with the United States.

Harris’ brief visit had three effects. First, it was a direct statement to China by the Biden administration about maritime territories – arguably the most direct, alongside frequent US Navy operations within the South China Sea. Second, it allowed Harris to splash the cash to back up a range of US promises. And third, with Marcos new to the role, it reminded the Philippines of US dominance in shaping the region’s geopolitical narrative.

Most Philippine leaders have been aligned to American priorities following the country’s independence from the United States in 1946. Ferdinand Marcos Sr, the dictator of the 1970s and 1980s, and father to the current president, was among the most fervently pro-American rulers. Former president Rodrigo Duterte, barring his affinity for Donald Trump, stood out for his rocky relationship with the United States. Not yet six months into his term as leader, Marcos Jr is already echoing his father’s preference for American leadership. Despite talking up an “independent foreign policy” in July, he told Harris, “I do not see a future for the Philippines that does not include the United States.”

In September, Marcos had talks with President Joe Biden in New York, despite an order from a US court regarding human rights violations by his family. But the US government acknowledged Marcos’ diplomatic immunities and allowed him entry. Weeks later, defence officials from both countries met to discuss holding more joint military drills, aiming to surpass the record-breaking participation of 9,000 troops in the war games last April. Then in October, Washington granted the Philippines US$100 million worth of foreign military aid.

The Philippines has a troubled history with the US military presence. After 48 years as an American colony, many of the Philippines’ contemporary laws, economic policies and educational systems have been shaped by the United States. This includes a flurry of military pacts, which, despite the banning of US bases under a historic decision by the Philippine legislature in 1991 and the subsequent US withdrawal from the naval base at Subic Bay, still allows American troops a constant rotational presence in the archipelago. As per the Visiting Forces Agreement of 1999, the United States holds jurisdiction over any visiting troop committing a crime in the Philippines, simulating diplomatic protections.

Because of the revitalised EDCA, groups such as the International League of Peoples’ Struggle (ILPS) and foreign policy experts have been reminded of the crimes committed by US soldiers on Philippine soil. The ILPS warns the Philippines could be a staging ground for intensified US action in the region.

The Philippines is historically the most willing to accommodate the United States.

The strengthening of EDCA signals a significant step up in American posturing. The Philippines clearly has a part to play in Biden’s “integrated deterrence” strategy for the Indo-Pacific in drawing in a wide net of alliances across the region.

The Pacific Deterrence Initiative (PDI) crafted in April 2022, outlines steps for tougher US presence in the Indo-Pacific region in terms of its armed forces, digital influence and surveillance. The US Congress has granted this program US$7.1 billion for 2022-23.

ASEAN countries are important partners for the United States, with military agreements already in place for Vietnam and Singapore. But the Philippines is historically the most willing to accommodate the United States, serving as a quasi-auxiliary force in conflicts such as the Korean, Vietnam and Afghan wars.

Despite American influence in the region, most ASEAN partners are likely still reluctant to be dragged into any situation that forces them to side with either China or the United States. The Philippines appears differently minded. Marcos, for example, spoke of a “joint response” for Taiwan should tensions escalate.

The dilemma is always the danger – which side is escalating, which side is responding? The Philippines faces difficult decisions. Caught between provocations and pledges of military aid and soldiers, the Marcos government treads near a tripwire of potential conflicts.

Previous Article
Islands of opportunity: Australia and India’s chance to collaborate
Next Article
Australia could lead the way on Rohingya crisis

The world sees the climate crisis in Australia’s floods. Do we?

Australia needs to lead in response to climate change or find itself become a global symbol for inaction.
John Lee 4 May 2017 12:54

China’s online platforms are now distinct from their US-designed counterparts and in some respects more advanced.
Edmond Roy 20 Feb 2019 06:00

The tea-seller turned prime minister may see another term in office despite lacklustre domestic and foreign policy.