The military should be restructured with a dedicated element to better tackle relief operations full-time. 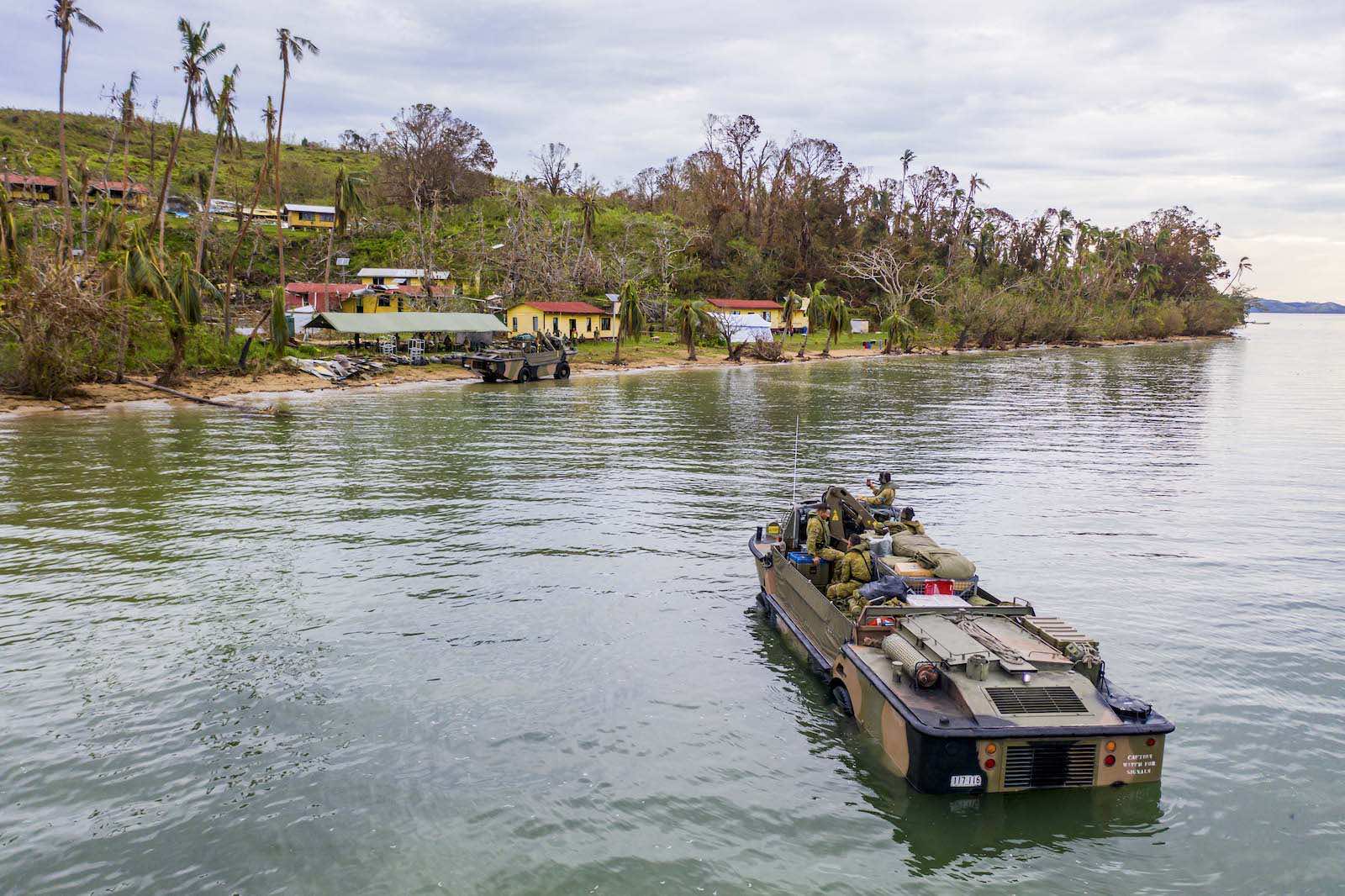 Australian soldiers land on the island of Galoa, near Vanua Levu, in Fiji to drop off supplies required to repair buildings affected by Cyclone Yasa in December 2020 (Department of Defence)
Published 4 Aug 2021 06:00   0 Comments

The Covid pandemic relentlessly rolls on but prescribed burns have now also begun across Australia as the next bushfire season rapidly approaches. Such actions highlight that compounding, overlapping disasters are the new normal and now need to be planned for. Indeed, last year’s Bushfire Royal Commission declared: “Natural disasters are expected to become more complex, more unpredictable, and more difficult to manage. We are likely to see more compounding disasters on a national scale with far-reaching consequences.”

The increasing scale and frequency of disasters has meant the Australian Defence Force (ADF) will become more and more involved in domestic and foreign Humanitarian and Disaster Relief (HADR) operations.

ADF personnel cannot undertake necessary training as they are deployed on HADR tasks, while warfighting exercises are now cancelled due to non-availability of units.

That might be thought of as just a bad month. But a quick scroll back through history suggests a worrying trendline. Only a decade ago, 1200 ADF personnel were deployed on 2011 Queensland Flood Assist; this was the largest ADF deployment since Cyclone Tracy hit Darwin in 1974. Since then, other large scale deployments include 2017’s Cyclone Debbie (1600 personnel), 2019 Queensland Flood Assist (3000), 2019/20 Operation Bushfire Assist (8200 plus 500 foreign personnel) and today’s huge Operation Covid-19 Assist (16,000 and counting).

Overlapping these have been international HADR operations. Those further afield generally involve Air Force and Navy delivering supplies with small-scale on-ground operations. However, those in the Pacific Islands are often for large cyclones and in the last decade have begun to involve up to 1000 personnel.

This steadily increasing use of the ADF on HADR operations is a feature of the time but creates problems in terms of the ADF maintaining its warfighting skills. These skills are now becoming more important than they have been since the end of the Cold War.

Australia’s strategic environment is deteriorating at unexpected speed, according to the 2020 Defence Strategic Update. The long-standing ten year warning time of a major conventional attack on Australia is now considered no longer valid. The government has declared the ADF must become better prepared both for high-intensity conflict and hostile grey-zone operations.

HADR operations conflict with this renewed warfighting focus. ADF personnel cannot undertake necessary training as they are deployed on HADR tasks, while warfighting exercises are now cancelled due to non-availability of units. Moreover, the long-term historical warfighting trend is of increased automation with fewer people and more machines. The future ADF is likely to have fewer uniformed military personnel and so have reduced capacity for personnel-intense HADR operations.

The fundamental problem is that today’s ADF is structured and postured for warfighting, not HADR. The ADF’s current approach of contributing on a part-time, as-available basis to HADR operations was designed last century to manage periodic natural disasters.

The time has arguably now come to restructure the ADF to undertake HADR missions on a full-time basis.

Today’s continuous HADR problem though involves not just Australia, but all Oceania. Regional nations should also be involved.

Accepting HADR as the new normal for the ADF would involve adding a new dedicated HADR element. This new component would effectively replace the warfighting elements of the ADF that are currently doing HADR part-time. Allowing for training and overlapping deployments, this new HADR element might comprise around 5000 personnel and effectively professionalise HADR in the ADF. The ADF would be bifurcated with today’s force of almost 60,000 military personnel remaining dedicated to warfighting and the new 5000 personnel part focussed on HADR.

Today’s continuous HADR problem though involves not just Australia, but all Oceania. Regional nations should also be involved, particularly PNG which has by far the largest population base in the South Pacific. Instead of 5000 Australians, perhaps half could be Pacific Islanders.

Such a combined standing force would be continually busy and consequently costly. Annual costs might be $2 billon, or about 5 per cent of the Defence budget. So the budget would need increasing. Against this, the current approach is also costly, although this is less apparent as expenses incurred are incorporated in off-budget funding supplementation. The current approach moreover imposes large opportunity costs in denying ADF personnel warfighting training and preparations.

There are reasonable arguments that such a HADR force need not be military. However, if it were, the HADR force could leverage off existing ADF structures and organisations including with training and support. If the HADR element was a stand-alone agency, its logistic “tail” would be a more substantial part than if ADF logistics systems were exploited. A separate agency would give less bang for the buck.

There have also been arguments advanced about the potential issues involving Pacific Islanders being part of the ADF as they are not Australian citizens. These arguments assume a warfighting role and thus issues about non-Australian citizens making war as dictated by the Australian government. Pacific Island governments would not unreasonably worry about assigning their military personnel to be on-call for any and all future conflicts Australia may be involved in. Having a dedicated regional HADR role removes such concerns.

Times have changed in Australia, and Oceania more widely. Natural disasters are getting bigger and more frequent with increasing demands for military HADR responses. The ADF needs to adapt to the times. Continuing with last century’s approach is quickly becoming untenable.