Australia’s embrace of the Pacific future needs to look to the untold past as well. 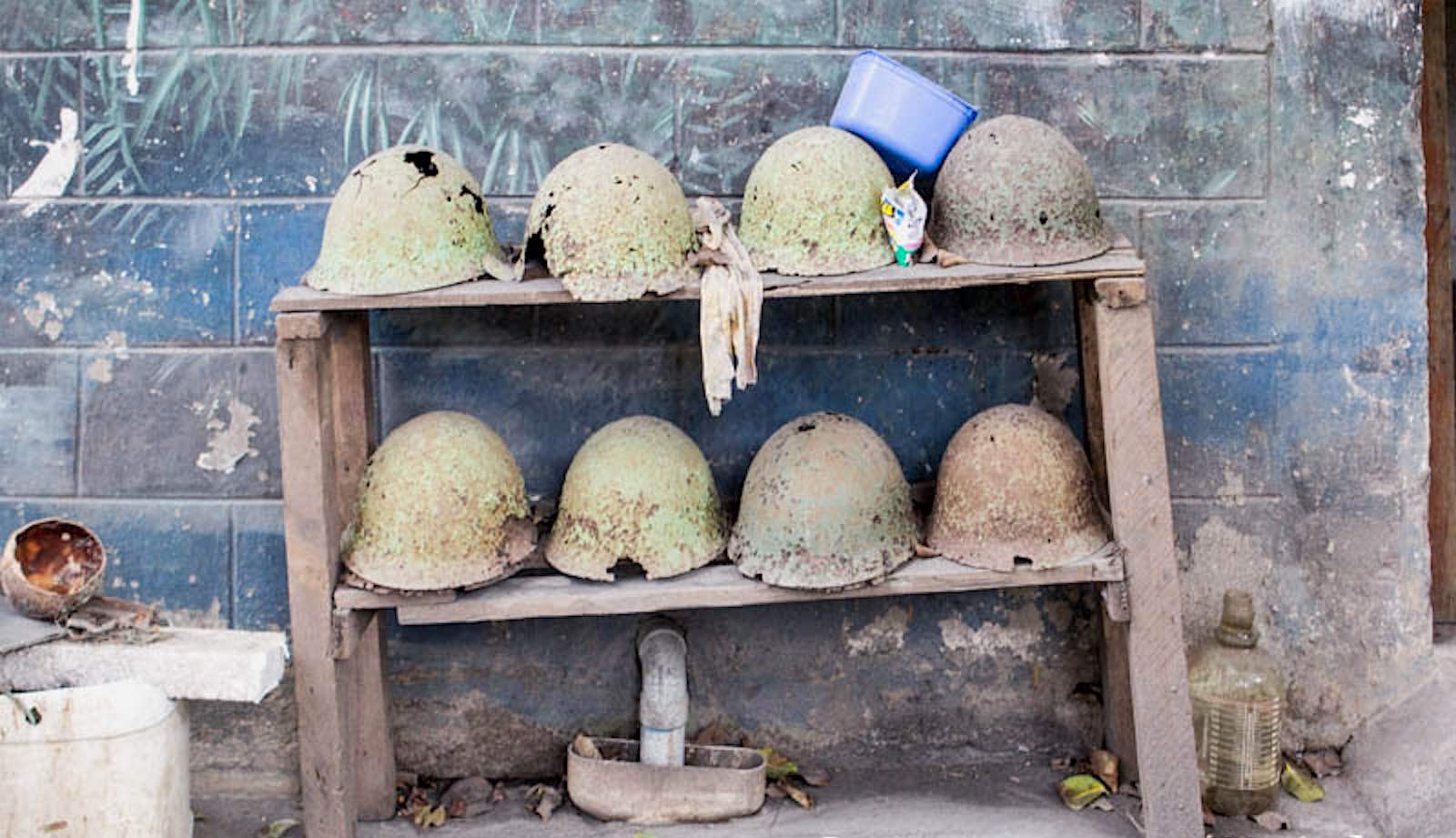 Forty-four years after Papua New Guinea’s (PNG) independence in 1975, Australia still struggles with the legacy of its colonial past. For those Australians who are aware of the history, it sometimes sits uncomfortably. For many others, it might be a surprise to learn of it at all.

As Australia pursues its “step up” to strengthen ties with its Pacific neighbours, this past still echoes. A positive example of the relationship between Australians and Papua New Guineans can be found farther back, in the Second World War. If we let them, the lessons from this history can point the way to a better relationship today.

Some of this history is well known. The campaigns in 1942 against Japan on the Kokoda Track and at Buna and Gona were legendary victories. A famous image from that time shows a Fuzzy Wuzzy Angel – the term for Papua New Guineans who came to the aid of Australians in the Kokoda campaign – helping a blinded Australian soldier as he walks along a track. It’s a picture that captures the connection between two cultures.

There is, however, another legacy of shared wartime history between Australia and PNG, one which is largely unknown and is rapidly disappearing as the living memory of those involved passes.

Even after the successes on the Kokoda Track and at Buna and Gona, there was still a lot of fighting to be done in the islands to Australia’s north. Punching above their weight in this theatre were the Coastwatchers, forerunners of today’s Special Forces, who observed and reported on Japanese movements and came to the rescue of downed Allied airmen and seamen. Future US President John F Kennedy was famously rescued by Coastwatchers after his torpedo boat, PT109, sank in Solomon Islands.

The Coastwatching Organisation had been set up by the the Royal Australian Navy long before the war, but by 1943 it had been subsumed by the highly secretive Allied Intelligence Bureau (AIB) and become known as M Special. Some of the original Coastwatchers in the islands to Australia’s north had stayed behind when the Japanese invaded. A number of them were captured and executed.

Some of those who knew the PNG wasman after the war are still living. They heard the stories of the wasman, but rarely tell them. When they pass, the stories will pass as well – unless they can be preserved.

In 1943, the AIB brought 76 young men from Port Moresby to train at a camp in Queensland. The men were from all over the Territories of Papua and New Guinea. Exactly how they came to be in Port Moresby is not clear. Many had been working on plantations away from their home villages in the islands when the Japanese invaded, and they may have fled the invasion at the same time as the white planters they worked for.

In any case, on 21 June 1943 they embarked an Australian hospital ship bound for Townsville. From there, they travelled by rail and road to the secret camp at Tabragalba, not far from Canungra in the Gold Coast hinterland. Here they trained as Coastwatchers. More young men arrived later.

The Australian officer who set up the Tabragalba camp, Army Captain Harry Murray, was a Gallipoli and Western Front veteran from the Great War who had settled in New Ireland in PNG as a planter. He recognised that reinsertion of Coastwatchers into the islands to observe and report on Japanese positions and movements would not work without local assistance. And so the young men from the islands trained with the Australians at Tabragalba. They were armed with US M1 Carbines, better for jungle fighting than the Army’s bolt-action Lee-Enfield .303, and deployed back to their homeland on US submarines.

The Papua New Guinean Coastwatchers were the eyes and ears of the Australians in a place where white men stood out. The formula worked well, and the intelligence provided by the Coastwatchers would prove critical to the Allied effort.

In addition to the Australian Military Cross and Distinguished Conduct Medal, Murray also received a Silver Star, the US military’s third-highest decoration, in recognition of his and his teams’ contribution.

Beyond coast watching, there were also successful guerrilla campaigns in Papua and New Guinea in places such as New Britain, where almost all the fighting was done by hundreds of armed locals, coordinated by a small number of Australians who mainly stayed in their camp.

Many of the young Papua New Guinean men who served with Australian soldiers formed bonds of comradeship with them, something rarely possible before the war, in a land where the relationship at the time was one of “master” and “native”.

Older Papua New Guineans in some areas have knowledge of the Second World War through the stories of people who lived through it, notably in the provinces surrounding the Kokoda Track, the islands region, and the northern coast of PNG. Some of these people were children during the war years and are still living. For them, the shared wartime experience forms part of the positive way in which Australia is still perceived, in some cases despite the later conditions of colonial rule.

For many years, although less and less, Anzac Day has been commemorated at small cenotaphs and memorials around the country, and in a large ceremony at Bomana, outside Port Moresby, by expatriates and Papua New Guineans who took part in the war. Papua New Guineans who fought the Japanese would proudly roll out and march or take part in ceremonies, sometimes travelling long distances from their home villages.

PNG also has its own annual day for commemorating those killed in war, National Remembrance Day, held on 23 July.

In Australia, some of the stories of the wasman have been kept alive, mostly in private accounts by Australians who owed the success of their operations ­­– and their lives – to the local knowledge, skill, and courage of their PNG comrades. These accounts were mostly written soon after the war.

Few in Australia would be aware of these stories today. The Australian emphasis on the Kokoda Track campaign means that far more people are likely to know about the Fuzzy Wuzzy Angels.

In PNG, knowledge of the wasman is largely restricted to those older people who knew them when they were young or saw them on Anzac Day, wearing their medals if they had them. Younger Papua New Guineans are hardly aware of what their forebears did during the war, but it is a history all Papua New Guineans should not only know, but of which they should be proud.

Many memorials and cemeteries from the era, apart from those tended by the Office of Australian War Graves, have fallen into disrepair or become overgrown, to varying degrees according to their remoteness from central administration. Well-attended commemorative activities and sites which are taken care of are likely to be close to central administration, and unfamiliar to people distant from these places. As a result, commemoration of the service and sacrifice of Papua New Guineans during the war based on war graves, memorials, museums, or interpretive centres is out of reach for most of the population. With probably all of the wasman now passed and only a few older people still alive who lived through the war, knowledge of this legacy of shared history of Australia and PNG is disappearing fast.

Like many things in PNG, where personal relationships carry so much weight, sustaining this legacy needs a different approach, a more personal one. Things often do not go to plan, and it is difficult to know what will work and what will not. One thing is certain, though: many Papua New Guineans love a good story, because stories are personal. The story of the wasman is a great story. And because it is about both our cultures, it reinforces positive perceptions of Australia’s history in PNG.

The key to preserving the legacy may lie in schools, by telling the story through the voices of both Australian and PNG historical characters, in English and Tok Pisin. The effort could be supplemented with teaching at both Primary and Secondary levels, with links to the Australian curriculum, and a focus on how our two peoples worked together for success.

This should not be a bald exercise in promoting Australian interests. Those interests would be well served by helping PNG honestly tell its own stories, from a PNG perspective. They may have been told locally by those who took part, but usually only in the oral tradition – they have seldom been written down. The written historical resources, those on which an educational legacy could be based, are mostly in Australia in the National Archives, the Australian War Memorial, and in personal accounts by Australians, who in telling their own stories also told those of their PNG comrades.

Time is limited, but the 80th anniversary of the start of the Second World War is an opportunity to give those stories a PNG voice, to ensure they outlast the living memory of the war.

Some former wasman went on to become successful in administration and government, while others languished, perhaps wondering where the camaraderie they had shared with Australians went after the Japanese were gone. For any of these men, their experiences would likely have shaped the rest of their lives, just as they did for their Australian counterparts. That is why, for as long as they could, they still travelled long distances to attend Anzac Day ceremonies in centres remote from their villages.

These historical contradictions persist today, 44 years after PNG’s independence. At the government level, Australia’s ability to manage the relationship is tainted by developed-versus-developing-country problems. Australia’s current lack of knowledge and understanding of the people, geography, and culture of our nearest neighbour means that PNG is more foreign to us than Southeast Asia or the Middle East. Our attempts at engagement are sometimes awkward, fraught, and characterised by poor, confusing, and 180-degree decision-making.

Australia is working to fix this through the Pacific “step up”. To some degree, this effort will be seen in PNG through the lens of Chinese expansion, and there will be a sneaking (and partly correct) suspicion that this is the motive. Therefore, we need to show we are not just trying hard, but genuinely interested, on a cultural and personal level, in a place where everything is intensely personal. What better place to start than with lessons from the past, when we worked so well together?

It will only work if we both know what happened.