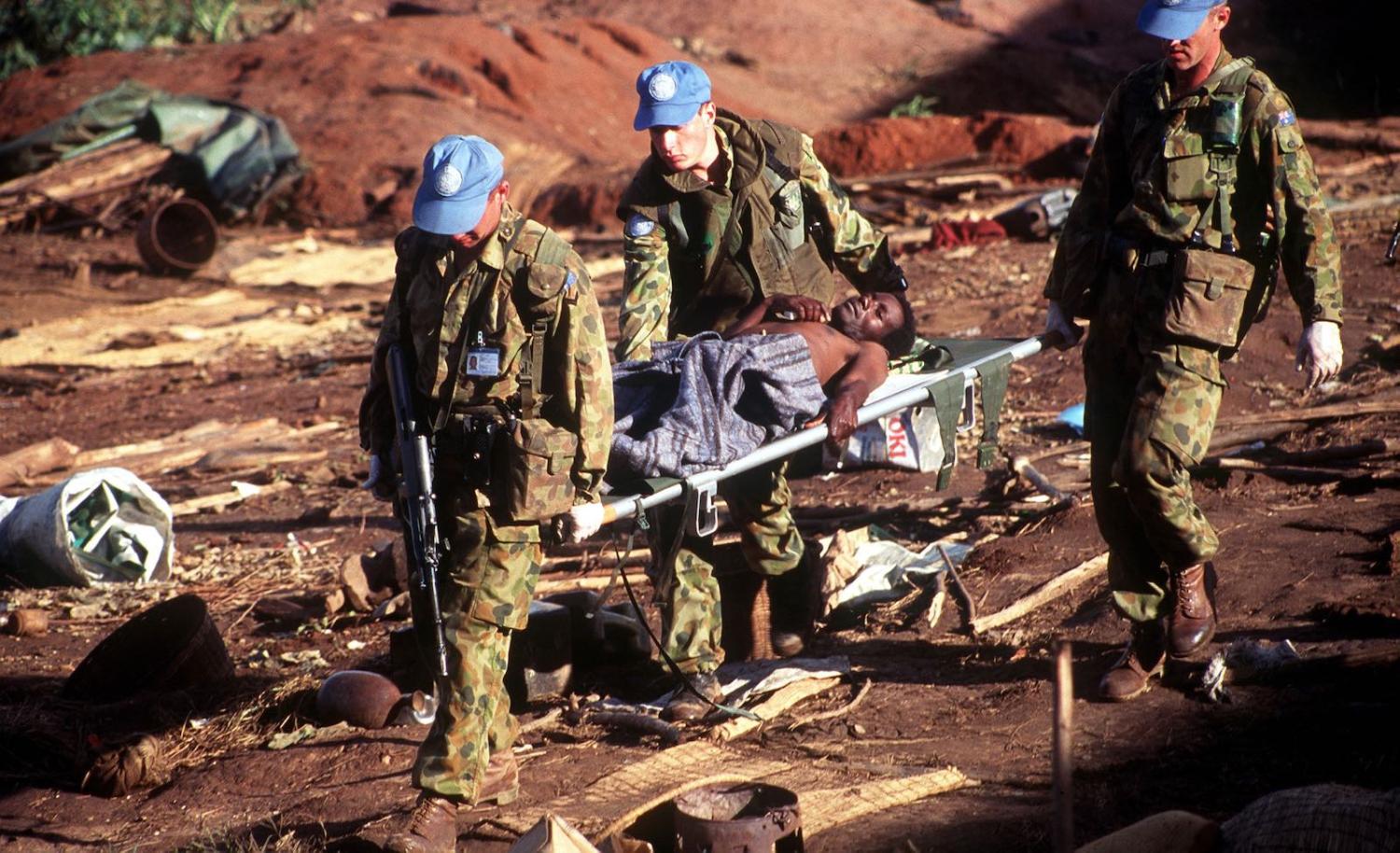 What you don’t expect to see when you arrive at Kibeho are the eucalyptus trees.

When Belgium ruled Rwanda, gum trees were planted across the colony to provide firewood. A small country in central Africa, Rwanda is mainly populated by two ethnic groups: the minority Tutsi and the majority Hutu. In a typical colonial strategy of divide and conquer, the Belgian administration placed the Tutsi minority in a privileged position. With independence in 1961, the Hutu majority gained power, and many Tutsi were forced to flee to neighbouring Uganda. Years later would begin the worst of all crimes.

In heavy rain, Rwandan troops entered the hospital compound and started shooting. In desperation, people surged over the razor wire and swamped the soldiers’ position.

Negotiations to end a Hutu-Tutsi civil war broke down in April 1994 – 25 years ago next month ­– when the Rwandan president, who supported a peace plan, was assassinated. Hutu extremists then perpetrated a genocide on moderate Hutus and Tutsis. In a little over three months, half a million Rwandans were killed. The genocide ended only when Tutsi rebel forces defeated the Hutu government and seized power in July.

In the aftermath of the genocide, the Australian government provided a contingent of around 300 Australian Defence Force personnel. Half were medical staff: the remainder were infantry and Special Forces to provide force protection. The troops arrived in the Rwandan capital of Kigali on 7 August 1994. Based at Kigali Central Hospital, they removed dead bodies and wrecked equipment and brought the hospital back into use.

A second contingent replaced the first in February 1995. The civil war had been over for six months, but hundreds of thousands of Internally Displaced Persons were still in camps. The largest of these was Kibeho, where between 80,000 and 100,000 people were living in a camp sprawling over nine square kilometres.

The new Tutsi government believed that the camps were full of genocidaires and feared they would become the nucleus for a Hutu guerrilla army. The Rwandan army began planning to close the camps by force.

About one thousand troops arrived at Kibeho on 18 April 1995 to shut down the camp. The UN mission hastily requested the Australian contingent to send 32 personnel to Kibeho. When they arrived the next day, as Corporal Blair Tidey remembered:

It was not until we moved deep into the camp that we found them – thousands of frightened people that had been herded closely together like sheep, huddled along a ridgeline.

The Rwandan army had concentrated the entire camp population in an area 1,000 metres long and 500 metres wide.

The Australians made contact with the troops and humanitarian workers already at Kibeho: a Zambian infantry company and the Médecins Sans Frontières (MSF) hospital staff at Kibeho, though unlike these two groups, they did not remain at Kibeho overnight. When they returned the next day, the Australians found that many refugees had been killed or wounded overnight. Half the casualties had gunshot wounds from Rwandan soldiers, the other half had machete wounds from Hutu militia who were forcing the refugees to stay in the camp to provide the militia with a “human shield”.

Australian troops went out with stretchers to retrieve casualties and bring them to the MSF hospital for treatment. When Rwandan troops started firing at the hospital, Lieutenant Steve Tillbrook moved his soldiers to the Zambian compound for mutual protection. In heavy rain, Rwandan troops entered the hospital compound and started shooting. In desperation, people surged over the razor wire and swamped the soldiers’ position. Lance Corporal Andy Miller ordered his troops to fix bayonets in case they needed to defend themselves.

When the last medical evacuation helicopter took off about 5.00 pm, around a thousand people rushed out of the camp. Rwandan troops on the ridge fired on those trying to escape with automatic rifles, rocket propelled grenades and machine guns. Then they moved down the valley in the rain, bayoneting and shooting the wounded.

As the Australians prepared to leave Kibeho that night, SAS medic Trooper Jon Church (who would later be killed in the 1996 Black Hawk training accident) rescued a bawling three year old girl. Another medic bandaged her arm to make it appear that she was injured, and she was given a biscuit laced with diazepam. When the sedative put her to sleep, she was hidden in one of the ambulance storage bins and taken to an orphanage. As Captain Carol Vaughan-Evans recalled:

We always remember that as a small victory. Despite all the [Rwandan army] did to that mass of humanity, we got one little girl out of there.

The Australians returned to Kibeho the next day to treat casualties and recover bodies. In the parts of the camps they could access, they counted 4,050 dead.

The Kibeho massacre was a horrific and disturbing event for all members of the Australian contingent in Rwanda. Many would later be diagnosed with Post Traumatic Stress Disorder. Four who served at Kibeho – Corporal Andy Miller, Warrant Officer Rod Scott, Lieutenant Steve Tillbrook and Captain Carol Vaughan-Evans – were awarded the Medal of Gallantry for their actions, the first time Australian soldiers had been awarded gallantry medals since the Vietnam War.

Gum trees line the ridge at Kibeho, where Australian peacekeepers found that there was no peace to keep.

little consideration was given to what US position would be in relation to the SDF when the Syrian government tries to reassert sovereignty in areas cleared of IS.
David Brewster 14 Aug 2017 07:22

Reports that Thailand, with Chinese money, is planning to build a new canal between the Pacific and Indian Oceans have set off a new wave of alarm bells over China’s plans to dominate the region.
Ashley Townshend, Susannah Patton 11 Jun 2021 13:30