A papal visit helps focus world attention. It also deals the Vatican in to the crowded “great game” in the Middle East. 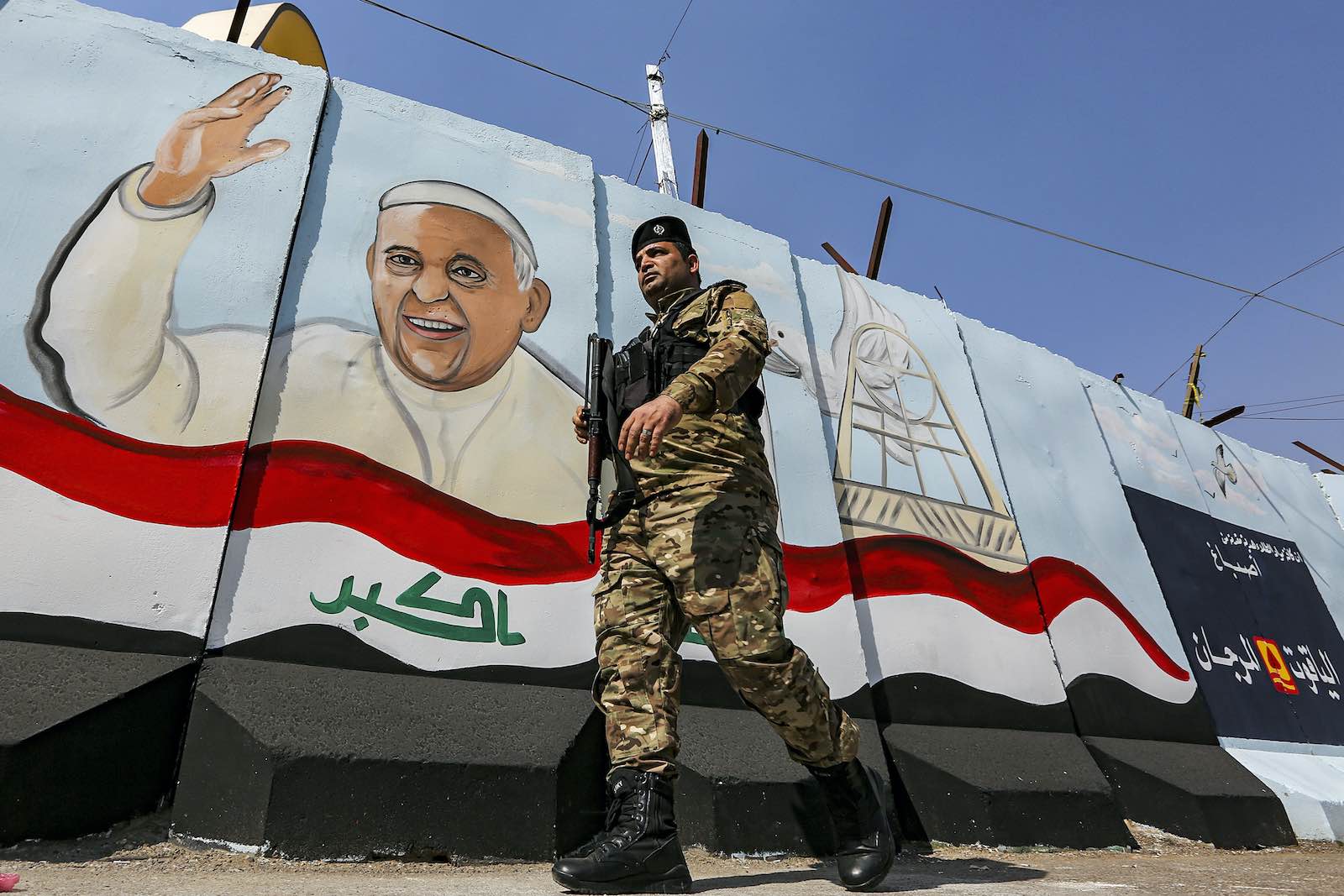 A mural depicting Pope Francis drawn on a blast wall outside the Syriac Catholic Church of Our Lady of Deliverance in the Karrada district of Iraq’s capital Baghdad, 1 March (Sabah Arar/AFP via Getty Images)
Published 3 Mar 2021 11:00   0 Comments

The chronicles recount that, while praying in the little dilapidated church of San Damiano, Saint Francis of Assisi heard a voice: “Francis, go repair my church, which as you can see is in ruin.” Like his namesake saint, Pope Francis will travel to Iraq from 5 to 8 March on a double-repair mission: shoring up the Iraqi Church, marred by years of violence and suffering, and strengthening the foundations of interfaith dialogue.

Still, the Pope is going to Iraq not just to repair, but principally to continue building on the doctrinal and geopolitical grand design of his pontificate. Apostolic journeys are a key instrument for Popes to bring public and classical diplomacy together by mobilising Catholic masses and attracting non-Catholic people and elites, and then converting social kinetics into political influence, both in the national and international arenas. For this reason, Papal travelling has a major impact on the political dynamics of the countries and the geopolitics of the regions where it occurs. At the same time, each Papal journey is intended to serve as a stage for sending messages addressed not only to the host nation, but also to the whole of humanity.

There were an estimated 1.2 million Christians living in the country before the US intervention in 2003. Today, that number is said by some to be fewer than 250,000.

Receiving a visit by the Pope means that the world will be watching, since during the Pope’s stay a nation is given the spotlight in the global media-sphere and political discourse. Resultantly, the host country’s political and religious leaders are offered a unique opportunity to gain legitimacy and validation by meeting the Pope, and even claim a legacy as peacemakers.

Oftentimes, Papal travels precipitate historic turns, as in the case of national reconciliation in Mozambique after Francis visited there in 2019, or prompt grand foreign policy moves like the restoration of relations between Havana and Washington shortly before Francis’ 2015 trip to Cuba and the US.

In a nutshell, for fragile and conflict-scarred countries, as today’s Iraq is, a Papal visit can be a transformative event.

Iraq is a country at a crossroads. Almost two decades after the 2003 war, the country remains caught in a fragility trap, facing increasing political instability, growing social unrest, religious factionalism and sectarian violence. Due to poor governance and widespread corruption, compounded by the Covid-19 pandemic, Iraq’s economy is in a dire spell. On top of that, the autonomous region of Iraqi Kurdistan, home to the 5-million-strong Kurdish minority and one-third of Iraq’s total oil reserves, openly vies for independence.

The exodus of Christians further adds to this dispiriting picture. Since the fall of Saddam Hussein, Iraqi Christians have been suffering both mass persecution during the Islamic State’s reign of terror and ongoing day-to-day discrimination, causing them to flee the country in droves. There were an estimated 1.2 million Christians living in the country before the US intervention in 2003. Today, that number is said by some to be fewer than 250,000 – an 80% drop in less than two decades. If this trend is not curbed and reversed, a religious minority that has been in those lands for centuries will soon be gone entirely.

This will be the backdrop of Francis’ apostolic journey: his first foreign trip after a 15-month gap, due to the pandemic, and the first-ever travel by a Pope to Iraq. High hopes are invested in the visit, with a general expectation that it will mark a turning point in national pacification and reconstruction. Yet it appears that many misconstrue what Francis may – and aims to – achieve. As the head of the Catholic Church in Iraq, Cardinal Louis Raphael Sako, stressed:

The Pope does not come to solve all problems, but rather to express his solidarity and stand with the Iraqis, and will carry messages of love, brotherhood, reconciliation, tolerance, peace, respect for life, diversity and pluralism.

Simply put, the Pope can help create the conditions for change, but cannot effect change by himself.

In Iraq, Francis, as the chief agent of Holy See diplomacy, will pursue the Vatican’s own agenda which, reflecting the nature of Roman Catholicism, transcends the local to seek the universal. The Pope’s priority will be ensuring that the Christian presence in Iraq continues and recovers, so that the Church remains an acknowledged stakeholder in Iraqi affairs. Francis wishes to establish himself as privileged political interlocutor of the Iraqi government and religious leaders. The Jesuit Pontiff also aspires to strategically position the Holy See as a first-tier player in the crowded “great game” of the Middle East.

From a global perspective, in the words of the prefect of the Vatican’s Congregation for the Oriental Churches Cardinal Leonardi Sandri, Francis is going to Iraq to “offer a concrete roadmap for the future of interreligious relations and for the future of the world”. Signally, the Papal schedule includes a meeting with Grand Ayatollah Ali al-Sistani, the highest religious authority of Iraqi Shia Islam. Francis will also hold an inter-religious prayer service for Christians, Muslims and other religious minorities in Ur, from where Abraham – the Biblical patriarch revered as the father of Judaism, Christianity and Islam – is said to originate. Clearly, the upcoming Papal visit has an important dimension of interreligious dialogue with Muslims and a projective value for the vision of universal brotherhood enshrined in Francis’ Encyclical Fratelli Tutti (All Brothers).

The journey to Iraq can be understood as part of a longer continuing travel to repair the Church and build a bigger one. The next destination may be Kazakhstan, for the Congress of Leaders of World and Traditional Religions in June 2021.