The right tools for a coherent regional response to forced migration

Reforming the Bali Process will provide a genuine forum for Australia and partners to prepare ahead of the next crisis. 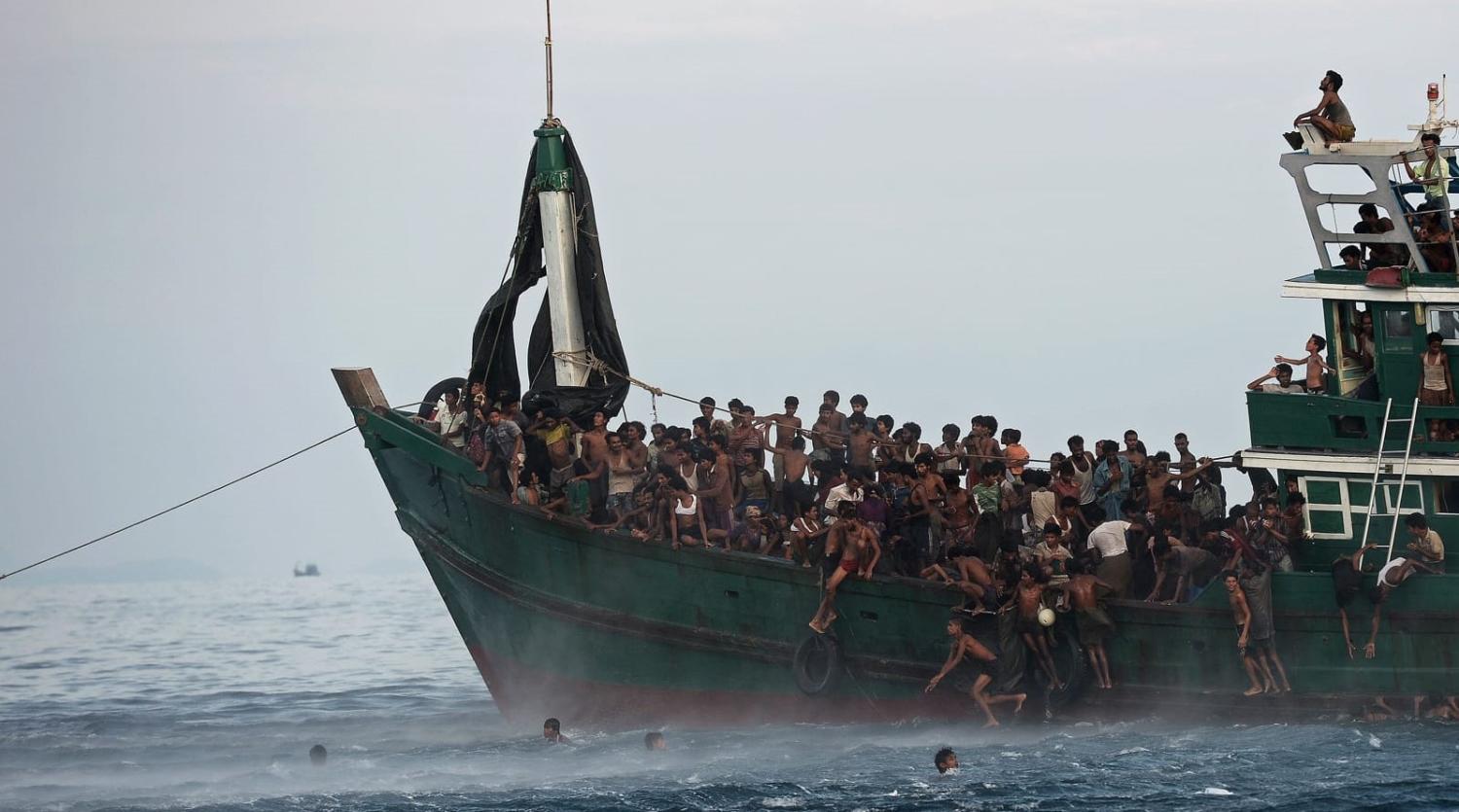 Rohingya migrants jump to collect food supplies dropped by a Thai army helicopter from a boat drifting off the southern island of Koh Lipe in the Andaman Sea, May 2015 (Christophe Archambault/AFP via Getty Images)
Published 5 Sep 2022     Follow @csmccaffrie

It has been five years since 700,000 Rohingya – half of them children – were driven from their homes in Myanmar’s Rakhine State, in what the US government has deemed genocide against the Muslim-majority ethnic group. Is the Asia Pacific any better prepared now to respond to another mass displacement event?

The intervening period – particularly the past 18 months – has seen ongoing crises in Myanmar and Afghanistan test the capacity of relief agencies and international diplomacy.

The Asia Pacific region does not currently have effective processes to manage forced migration. The Association of Southeast Asian Nations (ASEAN) is struggling to respond to the crisis in its member state Myanmar, leading rights groups to call for a rethink of how the body manages migration issues.

The time for reinvigoration of the Bali Process is now, before the next forced migration crisis, and, more importantly, before more people seeking asylum lose their lives.

Australia’s federal government has made regional engagement a focus of its first 100 days, with high-profile ministerial trips throughout Asia and the Pacific. While Australia’s status as a non-member of ASEAN is limited to dialogue and strategic partnership, its position as co-chair of the Bali Process gives Australia greater input into its direction and strategic vision.

As Henry Sherrell wrote in a report for the Migration Policy Institute in March, “[t]he establishment of the Bali Process was a significant strategic coup for Australia and filled a major geopolitical gap, particularly regarding regional cooperation on migration and border enforcement.” However its large membership (45 states and four international organisations) can make it unwieldy. More consistent engagement with members and leadership from co-chairs Australia and Indonesia would make the process more effective.

The Asia Dialogue on Forced Migration (ADFM) is a “second track”, informal process where government and non-government decision-makers and experts from across the Indo Pacific discuss more effective, durable and dignified approaches to forced migration. Established in 2015, the ADFM is co-convened by the Centre for Policy Development along with regional partner institutes in Indonesia, Thailand and Malaysia.

The ADFM has worked closely with the Bali Process over the past seven years, including in the review of the response to the 2015 Andaman Sea Crisis, which saw thousands of refugees and migrants stranded at sea, at least 70 of who died. While working groups and technical collaboration have continued virtually, there has been no ministerial meeting of the Bali Process since 2018. This lack of senior engagement is a missed opportunity.

The time for reinvigoration of the Bali Process is now, before the next forced migration crisis, and, more importantly, before more people seeking asylum lose their lives. The UNHCR has said that continued deaths of Rohingya refugees at sea represent an unfulfilled promise of the Bali Process to provide “a reliable and collective response to the regional challenge”.

Australia has an opportunity during its reset of regional relations to position itself as a collaborative leader in concert with a collaborative and ascendant Indonesia.

As the Bali Process marks its 20th anniversary this year, the ADFM Secretariat has released Future Ready, calling for “urgent reform” along eight specific points. Recommendations include clearer strategy and stronger vision from the leaders, elevating engagement with ASEAN, and strengthening early warning capabilities. The report also urges the consideration of a third rotating co-chair to complement the roles of Australia and Indonesia, and increased engagement from member states.

An additional reform to the Bali Process would be the incorporation of lived experience of displacement. Recently the Global Refugee-led Network (GRN) met in Sydney to raise awareness of the importance of refugees and displaced persons being at the centre of policymaking, which evidence shows makes policy more effective. Australia is a signatory to the GRN’s pledge to improve meaningful engagement of refugees, and as co-chair of the Bali Process could promote this.

Australia has an opportunity during its reset of regional relations to position itself as a collaborative leader in concert with a collaborative and ascendant Indonesia. There is a need to reform the Bali Process to provide a genuine forum for effective and coherent regional responses to forced migration, strengthen its connections to other bodies such as ASEAN, and provide clearer strategy and leadership to its nearly 50 members.

This will prevent further loss of life and safeguard our region against instability when – not if – the next forced migration crisis occurs.

Previous Article
A tragedy in Xinjiang, a tragedy for the UN
Next Article
Web3 is coming – with national security implications, too

China has not actually taken any action to prompt Silent Invasion being pulled.
Kaz Ross 29 Jan 2021 11:30

The Covid pandemic and anti-CCP fervour have brought together some unlikely allies.