A tragedy in Xinjiang, a tragedy for the UN

A long-delayed report finding human rights abuses – though damning – is a sign of China’s level of influence at the United Nations. 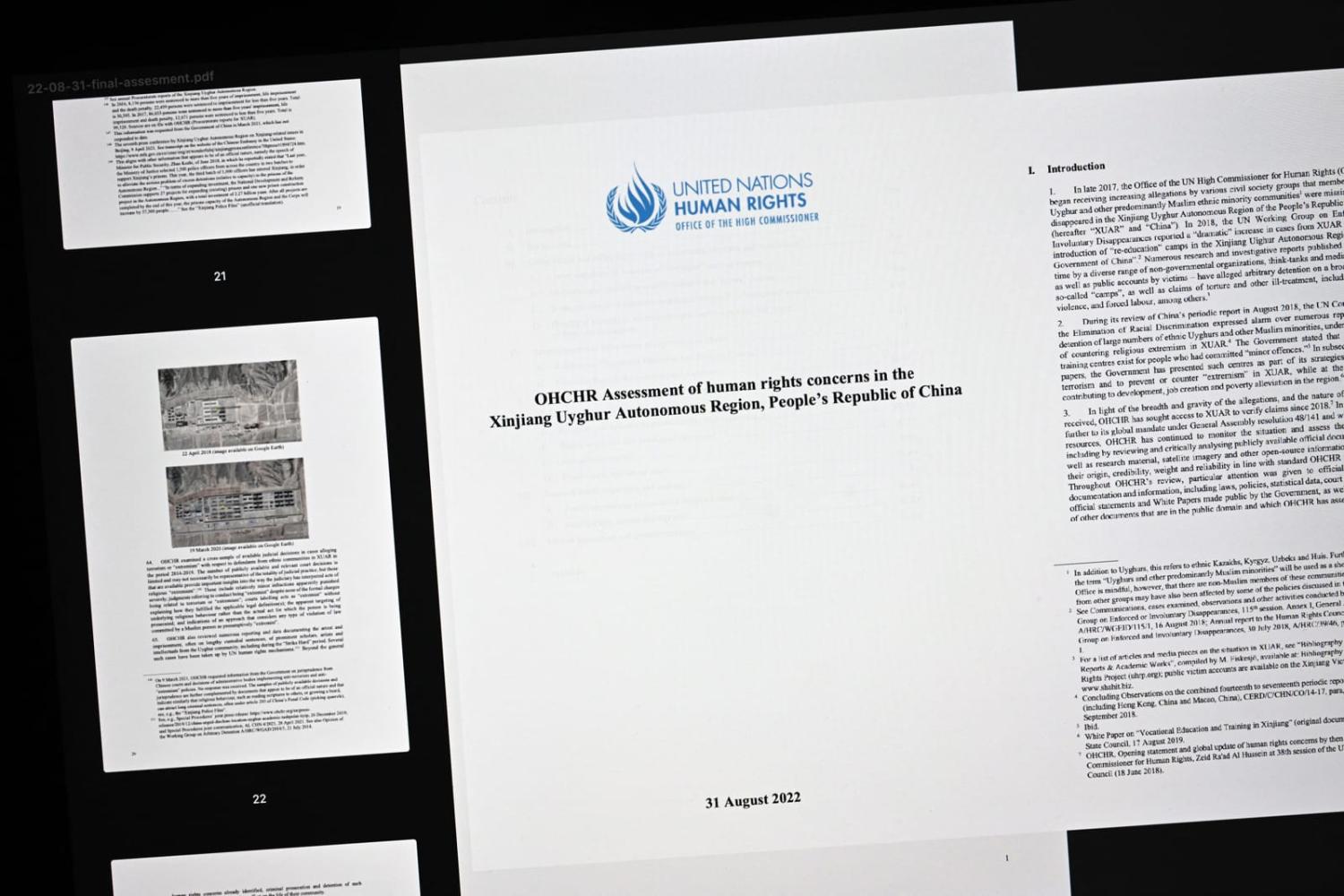 The UN High Commissioner for Human Rights Michelle Bachelet’s four-year term ended this week with the release at the eleventh hour of a long-delayed report assessing China’s Xinjiang Uyghur Autonomous Region. The report found that China had committed serious human rights violations in Xinjiang that may constitute crimes against humanity.

Released just minutes to midnight on Bachelet’s final day in the job, the report ­– which had been mired in controversy – was under development from 2018. Bachelet and the Office of the High Commissioner for Human Rights had been trying to investigate widespread claims of serious human rights abuses in Xinjiang against Uyghur and other minority groups, and to gain unrestricted access to China as part of the investigation. Despite China’s refusal to grant unfettered access to the region, the report was scheduled to be released in September last year. After months of silence on the report’s status, it was then revealed China exerted pressure at the United Nations to delay the release until after the Beijing Winter Olympics in February this year. Later it was announced that Bachelet would make an official visit to China in May, leading to speculation again that China had exerted pressure not to release the report in exchange for the visit.

The report calls on Beijing to release all those arbitrarily held in Xinjiang and investigate “allegations of torture, sexual violence, ill treatment, forced medical treatment, as well as forced labour and reports of deaths in custody”

Bachelet’s visit to China was widely criticised as a propaganda win for Beijing. In response to complaints about being seen to have bowed to Chinese pressure and amid increasing calls to resign, Bachelet – the former president of Chile – announced in June she would release the report before her term expired on 31 August.

Despite this statement, with intense lobbying behind the scenes from China to block publication of the report, Bachelet said last week she was under “tremendous pressure to release or not to release the report” and declared she wouldn’t bow to pressure from either side. It was a bewildering comment from the UN human rights chief, when one side is being investigated for perpetrating crimes against humanity.

However, OHCHR finally published the 48-page report at 11:47 pm Geneva time on Wednesday, along with China’s 131-page response to the assessment.

The report – drawing on victim accounts as well as leaked internal Chinese government documents and other documented evidence – details mass arbitrary detention, torture, cultural and religious persecution, forced labour, rape and sexual assault, forced sterilisation and other serious human rights violations perpetrated against Uyghur and other minority groups in Xinjiang. While the report falls short of labelling these actions as genocide, it concludes:

The extent of arbitrary and discriminatory detention of members of Uyghur and other predominantly Muslim groups, pursuant to law and policy, in context of restrictions and deprivation more generally of fundamental rights enjoyed individually and collectively, may constitute international crimes, in particular crimes against humanity.

The evidence is damning. Yet it seems fair to wonder what more the report might have said if OHCHR – the UN’s highest authority on human rights – hadn’t allegedly sought to water down sections of the final report to accommodate China in the days before it was released. Such allegations raise serious questions about the independence and integrity of the process and the extent of China’s interference over the final publication.

Alleged interference aside, the report’s release after so long has been welcomed by countries (including Australia), Uyghur groups and human rights organisations around the world, who have called on China to address the allegations. It remains to be seen how countries that haven’t previously spoken out about the situation in Xinjiang – particularly many Muslim countries – respond to the report. China has, unsurprisingly, denounced the integrity of the “so-called” report, which was “plotted by the United States and some other anti-China forces in the West.”

The fact that the report was released after so much pressure from China to bury it is certainly cause for some celebration.

However, the situation is also a testament to the level of influence that China exerts at the United Nations and the success of China’s long-standing systemic efforts to degrade international law and human rights in the multilateral system. That China could stymie for so long a report by the United Nations into crimes against humanity and allegations of genocide is perhaps a harbinger of the world order China would prefer where might makes right and state sovereignty trumps all else. This isn’t just Bachelet’s legacy to bear, but that of the entire United Nations system.

The report calls on Beijing to release all those arbitrarily held in Xinjiang and investigate “allegations of torture, sexual violence, ill treatment, forced medical treatment, as well as forced labour and reports of deaths in custody”. The report also makes recommendations for the international community – including the business community, which has been criticised for profiting from trade involving forced labour – and provides a foundation for further action by the United Nations. The next step will be for member states to vote on a formal investigation into the violations in Xinjiang.

Yet given the report itself was so difficult to release, this doesn’t really bode well for any collective action to stop the tragedy unfolding in Xinjiang.

Previous Article
“Should democracies ever lie?” Sort of. Maybe. Not really
Next Article
The right tools for a coherent regional response to forced migration

A repository for regional data not only preserves the lessons of the past, but will shape a better future, too.
Sam Roggeveen 1 Nov 2018 18:00

As the Chinese state and its emanations extends its reach beyond its traditional powerbases in the Sino-Myanmar hills, it pays to be aware of the motif of strategic Chinese infiltration.