The rise of China’s tech sector: The digital great game

The intensifying contest for the internet economy raises the prospect of US and Chinese tech titans carving the world into digital spheres of influence. 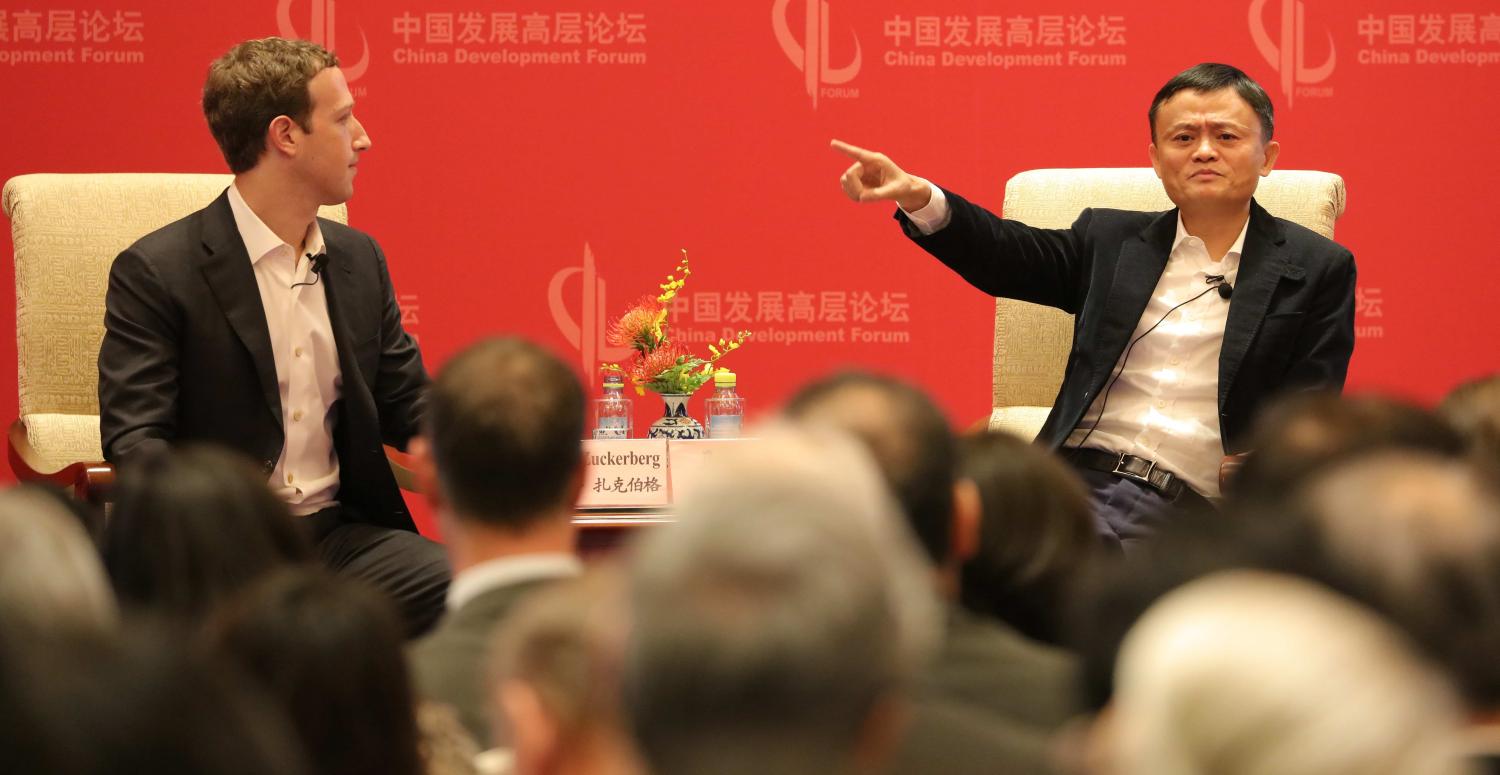 Part two of this two-part series looks at how the outside world shaped China's internet firms, and how they are now shaping the international economy. For part one, click here.

The rise of China's internet firms was not a result of autarkic industrial policy from Beijing. It was achieved through entrepreneurial initiative to leverage what the outside world could provide in order to tap China's growing markets. Like all private firms in reform-era China, tech companies had to survive in an environment of 'structured uncertainty', in which government institutions did not provide the protection and predictable support needed to foster novel product innovation that could compete with foreign technologies. Instead, Chinese private firms became competitive by adopting and adapting foreign technologies, supported by local authorities happy to ignore Beijing's 'indigenous innovation' directives in the interest of economic growth. The tech sector's ruling triumvirate of Baidu, Alibaba and Tencent (BAT) built their success on technologies developed overseas, including the internet itself.

Like firms across China's wider information and communications technology (ICT) sector, the success of internet companies was greatly aided by returning Chinese expatriates who had gained knowledge through study and work abroad. Taking Baidu as an example, the firm's co-founders, chief operating officer and former Big Data Lab director all received their postgraduate education and foundational work experience in the US. From 2000-2006, Beijing's Zhongguancun technology park (the heart of China's ICT sector) registered an average of two firms established each working day by such returnees.

Many Chinese tech firms also relied in their early phases on funding by foreign investors, a blatant breach of Chinese law connived at by regulators so as to grow private sector champions in the face of inadequate domestic capital markets. Foreign entities are still the largest interest holders in Alibaba and Tencent, now China's two biggest companies by market capitalisation. Alibaba's 2014 float on the NYSE remains the largest IPO in history, despite the company's legal structure giving foreign interest holders minimal control over business operations, which remains in the hands of the Chinese founders.

The question for China's tech sector today is how this interdependence with the outside world may change due to a renewed drive for technological independence. Beijing's increasingly expansive and intrusive regulatory regime for ICT, and its reported goal of purging foreign ICT entirely from government agencies and state-owned enterprises, drew claims from the US Chamber of Commerce that these measures would cost China's economy $US3 trillion by 2025 and an open letter from 40 foreign business associations pleading that China's ICT market be kept open.

But China's tech firms are already stepping into the breach. Backed by more robust government policy than in the past, and having accumulated the capabilities to compete technically with foreign industry leaders, China's internet firms are taking advantage quickly. Alibaba's proprietary operating systems are starting to replace foreign software in state use, while its cloud computing and data analytics services are being adopted by SOEs and provincial governments.

The internet giants are among a handful of Chinese firms starting to achieve what has long eluded the nation's private sector: technical innovation. Their ability to combine this with effective business models led MIT's Technology Review to pick five Chinese ICT firms (the BAT triumvirate, Didi and Huawei) for its 2016 global '50 Smartest Companies' list. As competition in China's domestic markets intensifies, tech titans and startups alike are increasingly turning their eyes to overseas expansion. In 2016, Chinese tech firms' mergers and acquisitions included US$17.6 billion of foreign investment, and their proportion of China's total outbound investment will rise as Beijing closes the spigot on less profitable sectors.

This outbound investment includes a determined push by the BAT firms into US markets, and substantial investment in US start-ups – Alibaba is again in the lead, with its chairman Jack Ma meeting then-US President-elect Donald Trump to promise a million new American jobs if his company is allowed to pursue expansion in the US. But just as US tech firms' attempts to crack the China market have been stymied, it is unlikely that China's tech leaders will out-compete US internet giants on their home turf. The decisive battles will be in third party markets, where the intensifying contest for the internet economy raises the prospect of US and Chinese tech titans carving the world into digital spheres of influence.

Certainly, the distinctiveness of China's online ecosystem has hindered apps and business models that evolved within it from capturing market share abroad. But thanks to adaptability and deep pockets, China's internet champions are starting to gain traction. As the dominant Chinese firm in online messaging and gaming, Tencent is making inroads into Latin America and even into advanced economies such as South Korea and Japan. Chinese ICT firms have built a major presence in India through both direct operations and investment, and Chinese money is pouring into European tech start-ups – Tencent's acquisition of Finland's Supercell has cemented its lock on the global online gaming industry.

But the key battleground will be Southeast Asia's fast growing internet economy, projected to be worth US$200 billion by 2025. The region's largest online retailer and payments platform are now controlled by Alibaba, its content access and instant messaging markets are seeing inroads by Tencent, and its lead ridesharing platform has partnered with Didi to compete with Uber. The online services sector is by nature a winner-takes-all game, and Chinese firms could well be planning to sweep the board in Southeast Asia just as they conquered their own nation's digital economy. Alibaba's creation of an e-commerce hub in Malaysia (the first step in Jack Ma's brainchild 'World Trading Platform' concept endorsed at last year's G20) and Ma's new role as e-commerce adviser to the Indonesian government shows how pressure to outflank domestic rivals is driving China's tech titans abroad to dominate emerging markets.

Yet despite the increasingly adverse climate for foreign ICT firms in China, and the global competition presented by the rise of Chinese companies, China's tech sector will likely keep growing in symbiosis with foreign counterparts. For all its obstacles, the Chinese market's allure has kept US ICT giants knocking at its door. Mark Zuckerberg is still courting Beijing to allow Facebook's re-launch behind the Great Firewall, and Microsoft has developed (in partnership with a Chinese state-owned firm) a modified Windows 10 version for Chinese government use, with Intel and Qualcomm reportedly having reached similar deals. Apple has poured a billion dollars into Didi, Nvidia has partnered with Baidu to build a computing platform for self-driving cars, and Tesla, which is racing Baidu to put autonomous vehicles on the roads, has received a big investment from Tencent. Google and Facebook are partnering with a Chinese investor to finance a new high capacity trans-Pacific internet link.

All this raises questions about how far the US ICT sector will be willing to assist the US government in its emerging digital arms race with Being, let alone support the technological embargo of China advocated by some in Washington. As highlighted by Jack Ma's meeting with Trump, blocking Chinese access to the US economy would entail large opportunity costs in export markets for US products and in foregone investment. Chinese FDI into Silicon Valley alone topped US$6 billion (excluding real estate) by mid-2016, and Chinese venture funding and skilled labour has become deeply embedded in the local tech sector. Non-US citizens make up half the core workforce in the Valley, where Mandarin is now the most spoken foreign language after Spanish.

Even if Washington could strong-arm US firms into cutting off China for strategic reasons, their advanced-economy competitors are unlikely to follow. German industry is pushing ahead in China, despite growing European concerns about the lack of a level playing field for foreign businesses. China's role as both indispensable market and technological collaborator is especially salient for German automakers and their push towards driverless cars – Audi has signed agreements with all three BAT firms to develop digital connectivity, while last year Daimler held its first hackathon in Beijing.

Foreign firms can be expected to increasingly seek access to Chinese technologies and skilled labour, given the nation's growing research spending and pipeline of qualified personnel, particularly in artificial intelligence. Rising state and private funding in China for AI has created a virtuous cycle of talent recruitment and technical advance, which is starting to manifest in academic research, industry recognition and marketable applications. Conversely, Chinese tech firms still need to go abroad for cutting-edge technologies and scarce talent. They are aggressively hiring in Silicon Valley and at leading US universities, while Baidu, Didi and now Tencent all run AI research labs in the US.

At home, China's tech sector is also developing an increasingly international character. There is a growing presence of foreign start-ups, which is actively promoted by local government and is now spreading beyond the expatriate hubs of Beijing and Shanghai to smaller cities. Conversely, the parlous state of US immigration policy, now aggravated by antipathy towards foreign tech workers and students that goes to the top of the Trump Administration, raises questions about whether the US can keep attracting the foreign talent on which its tech sector depends. Hefty sign-on bonuses offered by internet firms for relocation to China, and encouragement of skilled immigration by Chinese industry leaders, may further erode the US advantage in catching the 'new argonauts' of the transnational digital economy.

For smaller advanced countries, the speed and scale of China's tech expansion has still greater implications, given their own increasing dependence on ICT-oriented sectors that demand foreign capital, labour and markets. For example, a quarter of Australia's GDP growth in the last financial year came from three districts in inner Sydney with a concentration of knowledge-intensive industries. Located in this area is the first cross-border fintech incubator connecting Australia and Asia, intended to be a bridgehead for Australian startups into the Chinese market.

China's own transition towards an internet-enabled, service-oriented economy still has far to run. One study estimates that from 2004-2009, the internet contributed over 20% of GDP growth for the US, but only 3% for China. Internet penetration across China's population is still barely 50%, and while the tech-savvy urban consumer market is approaching saturation, other huge segments (the rural population, older people and enterprises) are still largely untapped; the nation's online retail market is projected to double in size to US$1.7 trillion by 2020. And despite Beijing's plans for technological autarky, the Chinese economy in general remains at a lower level of sophistication than the advanced countries. All this holds much promise for foreign tech firms that can navigate an increasingly complex and demanding Chinese market, and work effectively with the home-grown champions that now dominate it.

Australia‘s refusal to address the climate-security link has left it lagging. Will this season of fires change anything?
Tarcisius Kabutaulaka 31 Mar 2022 06:00

The danger is geopolitical competition being appropriated by local actors on both sides of local political tensions.
Erin Cook 23 Nov 2016 10:51

The Ahok witch-hunt in Jakarta

Ahok faces a blasphemy charge after quoting a Quranic verse while campaigning in the Thousand Islands in late September.