For those who would seek to understand Russia today, the Revolution’s unsettled legacy cannot be ignored.

Russians are preparing for a New Year heavy with historical symbolism.

A hundred years after their revolution, the French celebrated 1789 as year zero not only of the Republic that had finally emerged as France’s settled form of government, but also of a new, Enlightened era in the history of mankind.

But Russians are unlikely to commemorate the centenary of 1917 with fireworks, balls and street parties.

The Russian Revolution was one of the great events of human history. Its consequences were epoch-making not only for Russia but the whole world. But for the abdication of Russia’s last tsar, Nicholas II (who reigned 1894-1917), the names of Lenin, Trotsky and Stalin would mean nothing to those without a professional interest in the extremist fringes of Russian revolutionary politics.

Originally greeted with widespread rejoicing, the fall of the Romanov monarchy has since become shrouded in ambivalence. Celebrated only by the Russian Communist Party, the overthrow of the Tsar is today widely regarded not as liberation from the heavy hand of oppression but as herald of untold personal suffering and unexplained national humiliation.

Russians often use the word smuta – ‘a Time of Troubles’.

Largely unremarked outside Russia, the first of the revolutionary centenaries has already arrived.

On 16 December (Old Style) 1916 the ‘Mad Monk’ and ‘Holy Devil’ Gregory Rasputin was murdered in the basement of one of Petrograd’s most opulent palaces. With Russia’s pre-revolutionary calendar thirteen days behind that used in the West, the rest of the world learnt about it on New Year’s Eve.

Present at and implicit in the crime was at least one Grand Duke; the murderer – so at least the received version of the famous story goes – was the Tsar’s own nephew-in-law, the infamous Prince Felix Yusupov. Their aim was to save the monarchy; they almost certainly hastened its demise.

As Douglas Smith, author of a masterful new biography of the Siberian peasant, reminds us, a mere 64 days separate Rasputin’s grisly murder and the monarchy’s fall in February (March) 1917.

Smith dismantles the century-old image, retailed by everybody from Yusupov to the Bolsheviks, of Rasputin as omnipotent power behind the Throne, sex fiend and bedfellow of the Empress, and German spy.

Neither the saint the Imperial couple believed him to be nor the demon his detractors imagined, Rasputin emerges as an embodiment of late Imperial Russia’s suppressed fears and phantasms, the product of what Smith calls a ‘diseased Zeitgeist’ manifest in the unhealthy fashion for esoteric occultism that swept Europe's upper classes in the decade or so before the Great War.

Born in the Western Siberian village of Pokrovskoye within a few years of both Nicholas II and Lenin, Rasputin rose to become the Imperial Family’s informal spiritual adviser. For over a decade the unlettered Rasputin was a mainstay of life in the private circle of Nicholas and Alexandra.

Against the objections of the extended Romanov family, the Council of Ministers and leaders of the Church, they saw in him a starets or ‘spiritual elder’ raised up from the true soil of ‘Holy Rus’ and sent to them by God.

Occasionally, Rasputin’s prayers seemed to save their haemophiliac son, Tsarevich Alexei, from an agonising death. His verbal directness and unvarnished manners released them from the Imperial court’s elaborate fetters of protocol, as well as from the intrigues and (in the Imperial couple’s pious eyes) loose morals of St Petersburg’s thoroughly Europeanised aristocracy.

When the Bolsheviks later disposed of their bodies, Russia’s last Imperial Family were found to be wearing his portrait in tiny lockets tied around their necks.

That the Emperor and Autocrat of all the Russias should take the counsels of a Siberian vagrant dismayed even the dynasty’s most ardent supporters. Yet at his best Rasputin was in fact possessed of a certain kind of wisdom.

Owing to a failed assassination attempt that left him with a deep stomach wound, Rasputin was convalescing in a Siberian hospital 2000 kilometres from St Petersburg during the July Crisis of 1914. In a state of great agitation, he sent the Tsar a telegram imploring him to keep Russia out of the impending bloodbath. ‘Let Papa not plan for war, for war will mean the end of Russia and yourselves, and you will lose to the last man.’

Rasputin also foresaw the dangers of food shortages. Weeks before his murder, Rasputin wrote to Minister of Agriculture urging him to provision Petrograd adequately. He knew food was abundant in the countryside (‘Siberia is full of lard’, he observed). But supplies in the cities were running low, and Rasputin feared disturbances. Again he went unheard.

But as Smith points out, the spark that ultimately lit the revolutionary inferno was bread riots in the capital. Had only Nicholas heeded the Siberian peasant, he might still have been on his throne at the end of 1917; rather than defeat and (partial) dismemberment, the Russian Empire might have numbered among the victors at Versailles.

After the official atheism of seven decades of Communism and the moral vertigo of the 1990s, the court of Russia’s last Tsar is remembered as kind of Orthodox Camelot.

To complete it, some Russians desire for the Siberian peasant the same dignity of sainthood that has been accorded Nicholas and Alexandra. An unrecognised icon already exists, showing Alexei seated on Rasputin’s lap. Frowned on by the Church, it can often be found on display on the fringes of festivities in honour of his former Imperial patrons.

Not far from the narrow staircase leading down to the basement rooms where the starets was murdered, the bookshop stocks the works of monarchist historian Aleksandr Bokhanov.

According to him Rasputin fell victim to a rationalistic and positivistic ‘psychosis’ brought on by Russia’s breakneck Westernisation. A hundred years on, Rasputin’s vindication as a saint is essential to the revival of Orthodox Rus in the face of a triumphalist and unbelieving West bent on its enserfment within an US-led ‘New World Order’.

This is of course to approach 1917 from the perspective of 1991, and the scholar Smith is right to be impatient with such anachronism.

But diplomats don’t always enjoy the luxury of being wiser than their hosts. In his classic A World Restored, Henry Kissinger observed that the 'memory of states is the test of truth of their policy. [...] It is even possible for a nation to undergo an event so shattering that it becomes the prisoner of its past.’

Twice in the twentieth century the state in Russia collapsed, something without analogue in the history of English-speaking peoples. Each trauma shapes the way the other is seen.

In many ways, Rasputin’s murder was the first act in Russia’s revolutionary drama, the Siberian peasant its first victim.

By the time the ensuing Civil War came to an end, up to five million would be dead, the countryside ruined, and the cities half-deserted. Over the territory of a European great power the armies of half a dozen foreign armies will have marched, including a small contingent of Australians.

‘Dear friend’, Rasputin wrote to the Tsar in 1914, ‘a menacing cloud is over Russia, lots of sorrow and grief, it’s dark and there’s not a ray of hope. A sea of tears, immeasurable. And as to blood? What can I say? There are no words, indescribable horror.’

Russians are yet to agree on the meaning of their Revolution. For now a kind of uneasy public silence prevails, like that of a pregnant storm. The New Year will give the rest of the world a chance to see how and if it breaks. For those who would seek to understand Russia today, the Revolution’s unsettled legacy cannot be ignored. 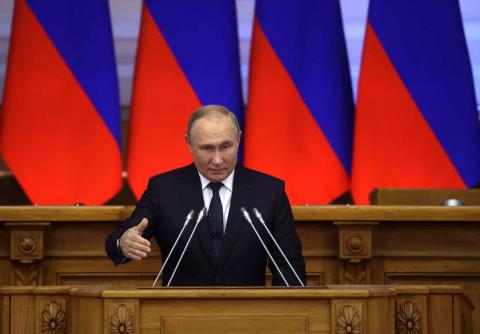