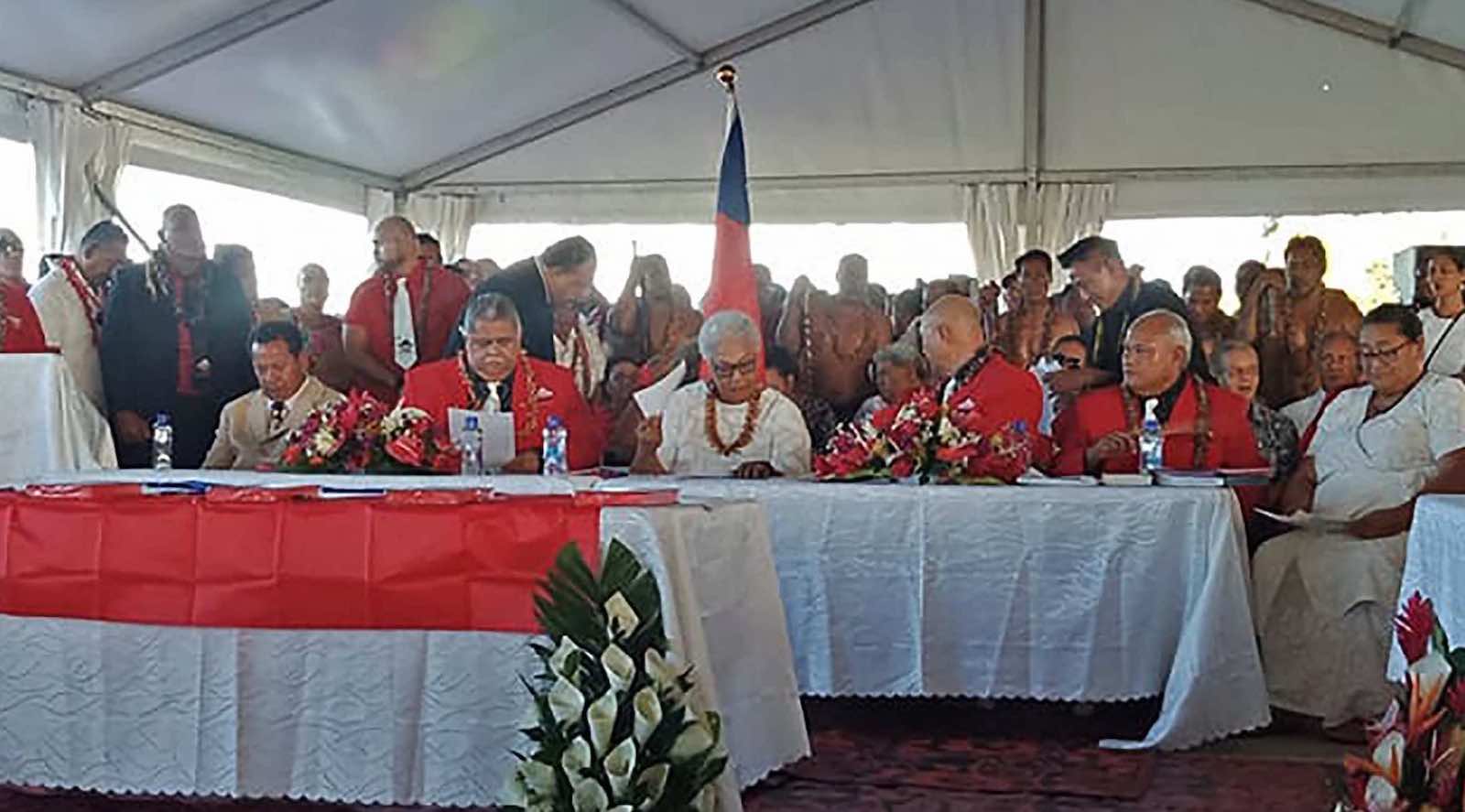 Fiame Naomi Mata’afa (seated centre, in white) with members of parliament and the judiciary in Apia on 24 May as she is sworn in as Samoa’s first woman prime minister in a makeshift ceremony outside parliament (Malietau Malietoa/AFP via Getty Images)
Published 8 Jun 2021 14:30   0 Comments

The April election in Samoa has set off a constitutional crisis that finds two rival leaders in a deadlock over the prime minister’s office and threatens the foundations of the country’s political institutions. Samoa is not the first country in the region to find itself in such a predicament. Not so long ago and not so far away, Papua New Guinea had to stumble through a similar episode, the history of which holds valuable lessons.

Judicial decisions on significant constitutional issues are not just being ignored, but forcibly rejected and attacked.

In response, the largely ceremonial head of state (or O le Ao o le Malo, equivalent to the Queen and governor-general in Commonwealth countries), Tuimaleali’ifano Va’aletoa Sualauvi II, called for a second election in May to end the deadlock – but not before attempting to install an extra women’s seat in parliament (which has a mandated 10% quota for women), bringing the HRPP level with FAST.

Accusing the HRPP of carrying out a coup, FAST conducted its own swearing-in ceremony outside parliament, which Tuila’epa called an act of “treason”.

While it is in many ways deeply rooted in Samoa’s political culture and history, the ongoing constitutional and political crisis has some notable parallels with the crisis in PNG which took place over the course of nearly 12 months from August 2011 to July 2012.

As in Samoa, the challenge in PNG involved competing contenders claiming to validly occupy the office of prime minister, and the use of a constitutional challenge in the supreme court for short-term political gain. Two significant constitutional rulings were rejected by one of the would-be prime ministers. The court was attacked as biased, and the chief justice and other judges harassed. The standing of the supreme court as the unchallenged constitutional arbiter was damaged, and the position of the head of state became politicised.

Samoa certainly faces a similar risk to PNG in that what are short-term measures in response to pressures to retain high office could do irreparable damage to the standing of the country’s supreme court.

The PNG crisis began when the long-serving prime minister, Grand Chief Sir Michael Somare, was in Singapore in mid-2011 for major heart surgery. A sudden realignment of numbers in parliament saw him removed on the basis that his ill health created a vacancy in the prime minister’s office. Peter O’Neill was then elected prime minister. Occurring less than 12 months before a scheduled five-yearly general election, in a period when a successful vote of no confidence would have resulted in an early election, the move ensured that O’Neill and his supporters controlled PNG’s finances in the lead-up to the ballot.

Somare returned to PNG in August 2011 and contested his removal. In December, the supreme court ruled in a constitutional reference that there had been no vacancy in Somare’s office, that his removal was unconstitutional, and that he was still prime minister. The ruling was immediately rejected by the O’Neill government, the first time that a PNG government rejected a supreme court decision. The head of state (in PNG the Governor-General, as the representative of Queen Elizabeth) recognised Somare as prime minister and swore in his cabinet nominees, only to be suspended by parliamentary vote and replaced by the speaker as an acting head of state.

A few days later, a chastened head of state announced that he recognised O’Neill as prime minister, and was restored to office. Meanwhile, Somare announced the dismissal of the police commissioner appointed by O’Neil and appointed his own nominee. So for varying periods there were two prime ministers, cabinets, heads of state and police commissioners.

Even before the December 2011 supreme court decision, the O’Neill government was concerned that the chief justice, Sir Salamo Injia, might favour Somare, and attempted to sideline him by charging him with maladministration, and when that failed, applying unsuccessfully for his recusal from the case. In February 2012, an unsuccessful attempt was made to suspend the chief justice from office. In March, he was arrested by police on a charge of perverting the course of justice (the national court quickly putting a permanent stay on the criminal charges). Later in March, a statute was passed giving parliament power to suspend and refer a judge for investigation and possible dismissal on various grounds, mainly related to bias. In April, the parliament legislated (contrary to the PNG constitution) to prevent judgments in constitutional references – such as the December 2011 judgment – from having binding effect.

The supreme court’s 21 May decision in the second constitutional reference affirmed the binding effect of its December decision and ruled the retrospective statutes to be unconstitutional. The next day, O’Neill’s deputy prime minister, Belden Namah, made a statement demanding that the chief justice and two other judges resign within 24 hours or face charges of sedition. On 24 May, in the company of Defence Force and police personnel, Namah entered the supreme court, launching verbal attacks on the chief justice, and after some delays and negotiations arresting him on a charge of sedition.

O’Neill came under significant public attack for the moves against the judiciary, and was increasingly concerned about losing office. The second supreme court reference and the various statutory initiatives were largely intended to delay any move to remove O’Neill from power and ensure his continued control of PNG finances as elections approached. O’Neill and his key advisers argued against the validity of the supreme court’s rulings by claiming that a voting majority in parliament had greater authority than such rulings.

The mid-2012 general election was the circuit-breaker, allowing all parties to back away from confrontation. However, nothing was done to resolve the fundamental difference in positions.

With the impasse seeming to be progressing towards a crisis after the second supreme court decision, all energies were temporarily diverted by campaigning in the June–July 2012 general elections. O’Neill’s political party won the highest number of seats, allowing him to form government as Prime Minister. At the August 2012 opening of parliament, the chief justice presided, and “there was reconciliation and handshakes all round”. Criminal charges against the chief justice and another judge were dropped, and in February 2013 the various recent statutes were repealed.

Hence it was the mid-2012 general election that was the circuit-breaker, allowing all parties to back away from confrontation. In doing so, however, nothing was done to resolve the fundamental difference in positions about the authority, respectively, of the parliament (and in reality the executive) and the supreme court. The standing and legitimacy of the supreme court was damaged. As researcher Ron May has argued, in 2017 and in 2020, the prime minister, and the executive government generally, have since the crisis increasingly used legal manoeuvres and constitutional challenges to avoid criminal charges and other forms of legal accountability.

The short-term pressure on O’Neill and his supporters in parliament to remain in office until the mid-2012 election was ultimately what drove a plethora of both unconstitutional moves and unprecedented attacks on the supreme court. The withdrawal of criminal charges and repeal of unconstitutional legislation reduced the damage done to the standing of the court, but did not directly address the constitutional and political issues involved, and so did not remedy the damage in full.

Samoa, of course, does not have the remarkable situation of multiple dual claims to offices that was experienced in PNG. On the other hand, the dangers of impacts of the Samoan situation extend beyond the prime minister’s position, with the largely ceremonial office of head of state being politicised.

Samoa certainly faces a similar risk to PNG in that what are short-term measures in response to pressures to retain high office could do irreparable damage to the standing of the country’s supreme court. The court’s standing was already under threat as the result of highly controversial constitutional amendments and two new statutes passed in December 2020, opposition to which had prompted Fiame Naomi Mata’afa to leave the HRPP in 2020 and establish the new FAST Party. Prominent Samoan jurist Fiona Ey argues that together the three 2020 laws “bring about major constitutional changes that would undermine judicial independence and the rule of law, with significant implications for human rights”.

The crisis also threatens previous understandings about the respective roles and responsibilities of the court and the executive government. Judicial decisions on significant constitutional issues are not just being ignored, but forcibly rejected and attacked, primarily on the basis of allegations of bias. It remains to be seen what impacts these developments have on the standing of the supreme court of Samoa.