The risk of going all-in with America’s trade war 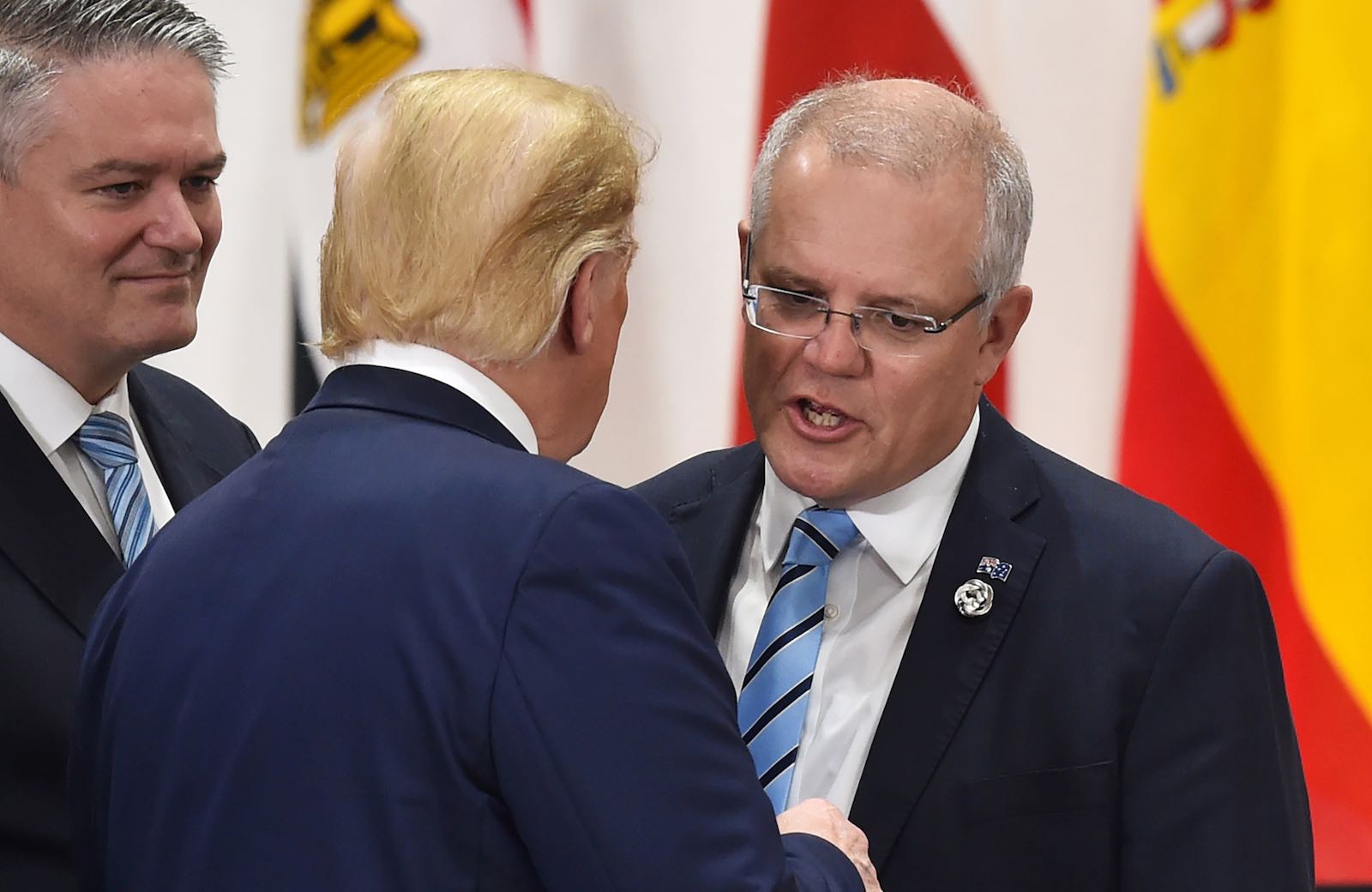 It makes good sense for Prime Minister Scott Morrison to look for areas of common interest during his forthcoming state visit with President Donald Trump. His interview with the Australian Financial Review suggests a stronger allegiance: to join Trump’s economic battle with China. This would be a bad idea.

The logic was not fully articulated in the article but seems to be that the global system needs to adapt to a new environment, and that Trump’s anti-China railings are a valid way of promoting necessary change.

The idea that substantial reform of the global economic framework is needed is indisputable. The practical issue is how best to achieve this. Trump’s bull-in-a-china-shop approach is not the answer.

First, it goes against sensible economics. His focus on bilateral trade balances is silly. There might be some cause for concern about a country’s overall surplus or deficit (for example, maybe Germany has too big a surplus), but it makes no sense to focus on individual bilateral imbalances. It would be silly to expect balance in our own individual transactions, only buying goods from someone who had bought something from us. Expecting bilateral trade balance is just as silly.

Second, his aim to bring back manufacturing production from China to America would forgo the benefits of comparative advantage (which Paul Samuelson once described as the only economic idea which is both correct and not intuitively obvious). A country should specialize in the things that it does best. It is also inconsistent with Trump’s other aim, of forcing open the Chinese economy for American investors, who want to set up production in China not only to sell to Chinese, but to export back to the USA, giving American consumers the benefit of China’s abundant labour.

What makes no sense is to rail against government help for industry, when this was a key element of America’s successful post-war industrial policy, with its heavy involvement of defence-related research and powerful industry lobbies.

In this, Trump sees a way of addressing America’s blue-collar job losses. This notion misunderstands the nature of economic transition. Coal mining is a well-paid “manly” job, and the loss of jobs (from more than 800,000 after the Second World War to 50,000 today) created serious social problems. But China didn’t cause these losses – it was technology and alternative energy sources (which created some jobs elsewhere). Even where the case can be made that China’s exports are the proximate cause (say, in manufacturing), technology still would have dramatically reduced the workforce, even if all America’s cars were produced at home. The answer to job dislocation will be found in policies directed specifically at the problem: America should look at Scandinavia’s active labour market policies.

On global trade, the key argument that Morrison should make is that Australia, as a medium-sized economy with overwhelming comparative advantage in resources and powerful complementarity with China (we each benefit from the other’s resource endowment), a multilateral trading framework is indispensable. It might be possible for a huge multifaceted economy like America’s to disengage from China without disastrous self-harm, but for Australia it is inconceivable. Morrison should disabuse Trump of any expectation that we would join him in disengaging.

Nor should he endorse Trump’s revival of currency war over an undervalued renminbi. There was a time when the currency was greatly undervalued, as part of a successful export-led growth strategy. China’s overall external surplus was huge: 10% of GDP. But that was a decade ago. Today China’s current account is near-balanced, and the IMF (and just about everyone except Trump) accepts that the renminbi is appropriately valued.

What about China’s state-capitalist system, based on favouring state enterprises? Not so long ago, America would not have been concerned about this situation, as there was a confidence that America’s private-enterprise system was far superior and would prevail. This may even still be the right attitude. What makes no sense is to rail against government help for industry, when this was a key element of America’s successful post-war industrial policy, with its heavy involvement of defence-related research and powerful industry lobbies.

But what of the possibility that Trump’s anti-China tactics are just a bargaining weapon, to force reform on China? Trump specifically cites inconsistency as his chosen bargaining mode. Perhaps this is Trump’s version of Nixon’s “madman” strategy:  Nixon thought that if the Russians believed that America was run by a madman, they would be more fearful of nuclear war and thus more amenable in negotiation.

It’s unlikely that Morrison will be able to influence Trump’s tactics, but there is no reason to join him. Before he goes to Washington, Morrison needs a precise brief on what issues we have in common with America in dealing with China. On economics, there is not much. He could suggest that, whatever China’s economic sins (investment restrictions, industry protection), these are best addressed in a multilateral framework, with the support of other global trading nations. Economic transition takes time, and China has reformed much over recent decades: we should apply patient pressure, not tantrums. As a net buyer of intellectual property, we don’t have much interest in helping America to enlarge and enforce the monopoly elements of an imperfect IP system.

There is far more common ground in the security area. Australia is coming to recognise that we need to be more careful in vetting and monitoring foreign investment, and the motivation would be the same as America’s, including selling companies with critical IP. We need to put substantial resources into addressing cyber risks. We need to think carefully about our vulnerabilities to potential Chinese agents-of-influence and blackmail style pressures, especially in trade.

There is no shortage of areas of common interest. But there is no advantage in joining a madman strategy, even if we acknowledge that the global trading system needs reform.