A smarter use of voting technology to stop election-related violence

Maybe in the search for efficiency we sometimes overcomplicate things, and the better solution is to get back to basics. 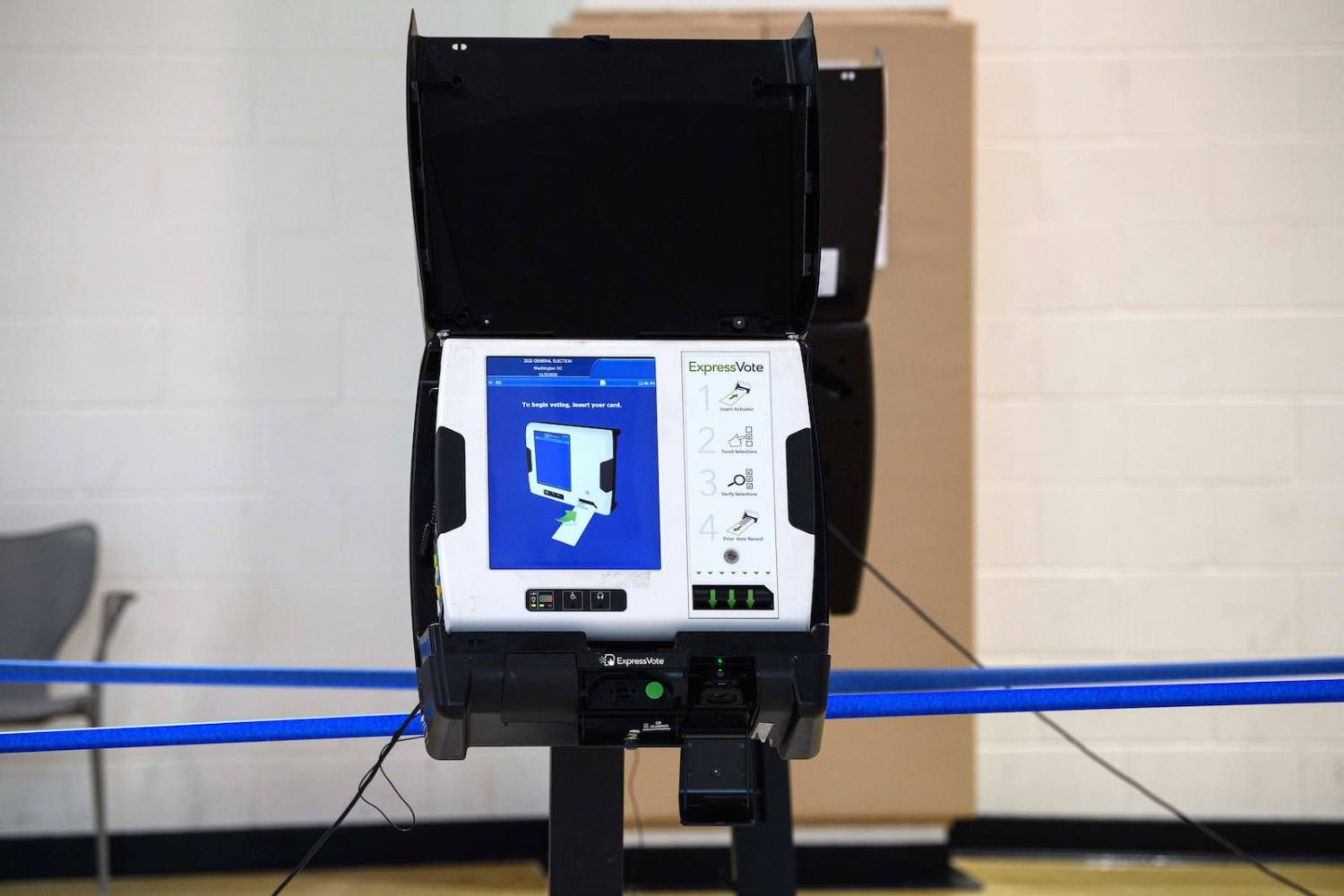 An electronic voting machine at a polling station in Washington, DC during the 2020 US presidential election (Nicholas Kamm/AFP via Getty Images)
Published 15 Jun 2022

Two months after pro-Trump rioters’ cries of “stop the steal” have faded from the US Capitol, many Americans are still reeling from the assault on their most hallowed halls of democracy. While the events of 6 January were shocking, the fact that they had bubbled up from under the surface of an otherwise comparatively peaceful democracy made them especially remarkable. But around the world, many countries’ election periods are regularly marred by violence – more so in young or fragile democracies such as the Central African Republic, and around elections that voters view as corrupt or unfair, like in Kyrgyzstan, to name just two from 2020. In Myanmar, the military’s claims of fraud in the country’s elections last November were used as justification to mount a coup against the government, with the crackdown subsequently descending into widespread violence.

For an election outcome to be credible to voters and outside observers, it needs to both have followed a fair and transparent process, and for voters to believe it has followed a fair and transparent process. The US is a compelling example of a breakdown in the latter leading to crisis – despite there being no evidence of widespread voter fraud or ballot tampering, a study by a group of prominent US universities found 38% of Americans lack confidence in the fairness of the 2020 election (the figure is 69% for Trump voters). Those storming the capital were evidently the most fervent doubters that a fair and transparent process had been followed, with analysis suggesting rioters weren’t just claiming fraud as an excuse to wreak havoc – they genuinely believed the election had been stolen and were taking matters into their own hands.

Shifting from voting machines to a more secure and auditable system is an important step towards shoring up voter confidence in the outcome.

It is normal for tensions to run higher than usual during an election period – so an outcome that is not credible to citizens can be like lighting a match near a gas leak. Is there a way to make better use of available technology to improve voters’ confidence in the result? Election-related violence can have many drivers, making it a complex issue to prevent. And the firehose of mis- and disinformation that voters are exposed to online makes them more vulnerable to being misled by false claims than ever. There are still steps that election authorities can take to increase public trust in their processes – but surprisingly, it might involve using less technology, rather than more.

In the US, one leading conspiracy theory claimed that voting machines supplied by Dominion Voting Systems had been hacked, diverting votes from Donald Trump to Joe Biden without voters’ knowledge. A foreign concept to Australians accustomed to entirely paper-based elections, voting machines are widely used across the US, including in the 2020 election. While there is no evidence to support claims of widespread hacking in favour of Biden, people are right to be sceptical of voting machines on the whole, which experts say have major vulnerabilities that threaten election security. As noted by Princeton professor Andrew Appel, voting machines are essentially just computers that offer all the same opportunities for physical or network hacking without voters’ knowledge – and in many cases, their outdated technology makes them much easier to compromise. Some machines rely on voters themselves identifying any discrepancy on a small printout; others produce no paper trail whatsoever, making auditing results impossible.

By far the safest system of vote recording and counting, according to Appel, is close to what we do in Australia: ballots filled out by hand with a pencil and counted either by hand or using an unnetworked optical scanner (similar to the machines that mark bubble sheet forms used in exams). Original ballots are then kept in case a recount is needed. Some election outcome doubters will certainly remain, but shifting from voting machines to a more secure and auditable system is an important step towards shoring up voter confidence in the outcome.

Claims about hacked Dominion Voting Systems machines even extended to Myanmar’s election, although those rumours were even more quickly debunked – the country used an entirely paper-based voting system. But in Myanmar too, smarter use of technology in elections could minimise the (already tenuous) grounds on which its military challenged the outcome. Tackling messy voter registration rolls using smart phones would be a valuable improvement to election credibility, and give Myanmar’s electoral commission a stronger basis on which to reject claims of fraud. Over 80% of Myanmar’s population has access to a smartphone (not far behind Australia, at 90%), meaning most households could confirm or update their voting details via an app in advance of election day. This would allow authorities to easily remove duplicate entries and the names of those who have died from the electoral roll before election day.

There is also a non-technical solution here: in Myanmar (and many other developing countries), voters dip a finger into a pot of ink on their way out of the polling station, quickly identifying anyone who tries to vote twice. It’s hard to imagine this method being adopted in the US for 2024, but perhaps the simplest answer is still the best one.

Previous Article
Economic diplomacy: The business of coups and China’s Quad response
Next Article
The Belt and Road, and the pandemic detour

Did the FBI swing the US election?

What effect has the 10 days of uncertainty had? Clearly Comey’s initial comments helped Trump. Was his 6 November finding too late to help Clinton?
Denise Fisher 9 May 2017 15:37

Given Macron’s lack of experience, French officials who know New Caledonia will need to continue to mediate this final phase of the Noumea Accord.