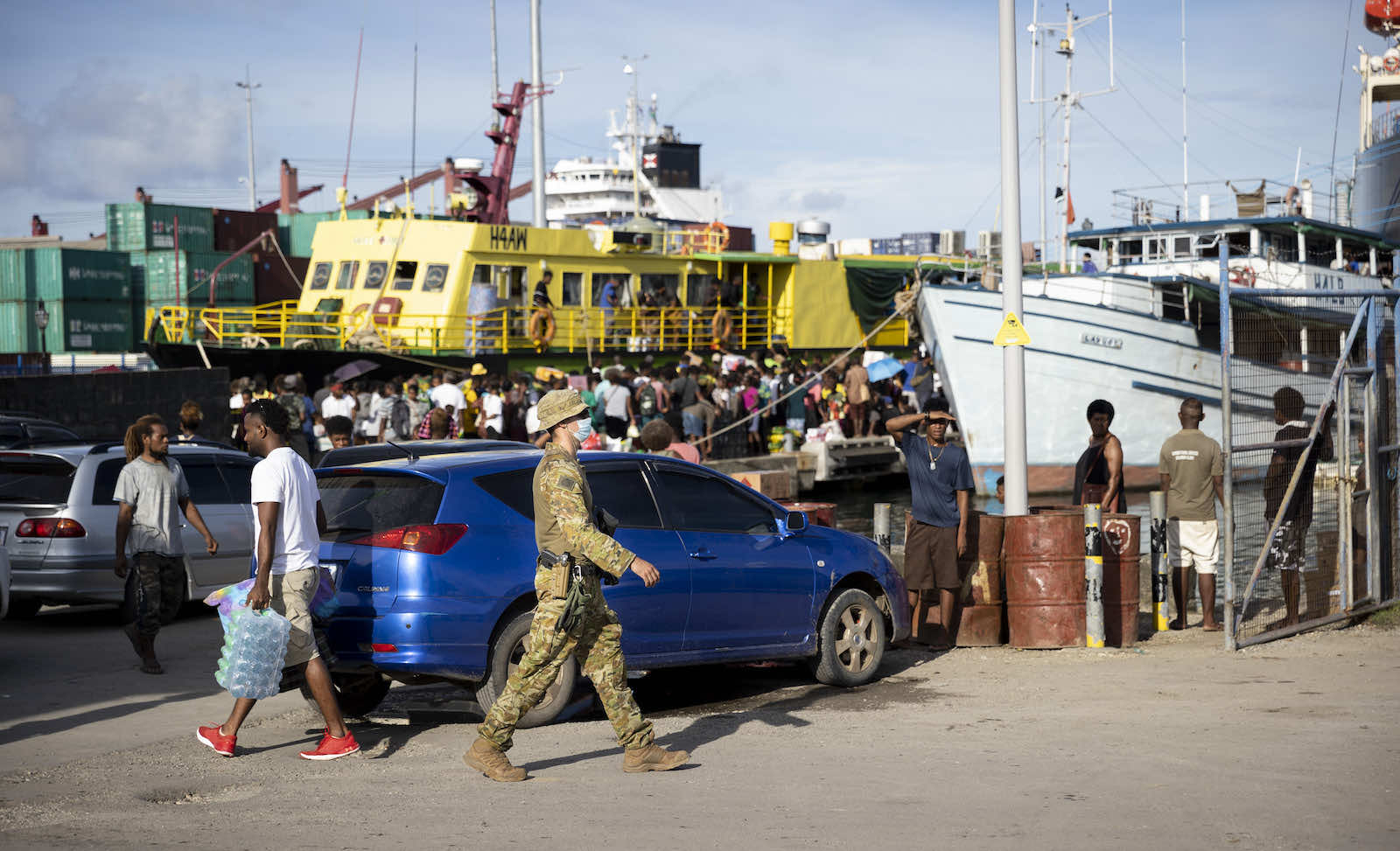 As Australian personnel patrolled the streets of Honiara, Solomon Islands Prime Minister Manasseh Sogavare this month successfully fended off an attempt to oust him. The failed vote of no confidence came after violent anti-government protests that followed two years of tensions between Sogavare and the government of Malaita, Solomon Islands’ largest province.

Much of the coverage from Australia of this unrest has focused on divisions over China policy between Sogavare and Malaitan Premier Daniel Suidani.

In 2019, Sogavare cut ties with Taiwan in favour of China, angering many in Solomons, especially the Malaitans. I reported from Auki, the Malaitan capital, in the days following the decision. Discontent towards Sogavare was palpable: the Malaitans liked the Taiwanese, and feared Solomon Islands was too small to handle Beijing.

When Solomon Islands’ Opposition Leader Matthew Wale, a Malaitan, made his case to dismiss the PM recently, the Taiwan/China “switch” only received a few mentions. Instead, Wale offered a catalogue of long-running grievances. He cited the rise of the logging industry, which has seen the country’s old-growth timber decimated and its value exported, with little economic return for locals. He spoke of scenes in hospitals, where patients have been seen sleeping on concrete floors waiting for treatment. And he spoke of corruption.

“The looting on the streets,” Wale said, “is nothing compared to the looting from the top”.

The need for more investment in rural Solomons is clear but given the deficits within Australia’s aid program, change will be hard.

Manasseh Sogavare has been a dominant political figure in Solomons since 2000, serving four separate terms as prime minister. His opponents view him as a figurehead for failure, but even if Sogavare was ousted these inequities would remain.

The recent unrest in Honiara reminded many of the instability that gripped Solomon Islands from 1998–2003. Fearing state failure, the Howard government responded with the Regional Assistance Mission to Solomon Islands (RAMSI), which saw a coalition of 11 Pacific Island nations and Australia deploy to Solomon Islands to bring stability.

Scott Morrison’s decision to send the Australian Defence Forces (ADF) echoes RAMSI, but is a much more modest and contained intervention. While treaty bound, the decision to enter Honiara was still the right one, protecting lives and property.

As with RAMSI, the recent ADF deployment has been successful in quelling unrest. But also like RAMSI, it is not a substitute for addressing the long-running grievances that are polarising Solomon Islands, and creating fertile ground for agitators to advance their own internal political and economic goals.

Longer-term solutions are needed. These must be found by Solomon Islanders themselves, but they can be undergirded by a more community-focused Australian development offering to all nine Solomon Islands provinces.

Beyond peacekeeping, Australia has focused on capacity building in the Solomons – strengthening the police, judiciary, and government. Australia has also financed major infrastructure projects, such as the Coral Sea Cable and the Tina River Hydropower Project.

No matter the merit of these initiatives, their Honiara-centric nature compounds a feeling of economic neglect in rural communities, where 80 per cent of Solomon Islanders live.

The need for more investment in rural Solomons is clear but given the deficits within Australia’s aid program, change will be hard. A quarter of Australia’s aid spend is managed by the private sector, which is inherently reluctant to shake things up, even if the need is there, as not to risk future contracts.

Even Australia’s flagship for the Pacific “Step-up” policy, the Australian Infrastructure Investment Facility for the Pacific or AIFFP, appears constrained. The A$2 billion fund is the product of Australia’s narrow focus on “strategic denial” in the Pacific – a policy that fends off China first, primarily by placating the interests of elites, and can leave Pacific Islanders’ welfare second.

This security-driven approach is counterproductive. It legitimises Pacific cynicism towards Australian intent, and is an overreaction to the China threat rooted in the diminutive Australian view that Pacific nations can’t deal with Beijing without sacrificing their sovereignty.

Australia’s missteps are not to blame for the recent unrest in Solomon Islands, but a reimagined Australian development offering can help mitigate against future strife. Canberra needs stronger partnerships with local leaders – provincial, tribal and religious – to gain visibility over nuanced village-level problems, and it needs to support solutions no other donor will.

A diverse set of problems will emerge from these processes, but there will be common issues, such as energy poverty. In aggrieved Malaita, just three per cent of its 200,000 people have reliable electricity access. Challenging geography may have dissuaded a systematic approach to ending village-scale energy poverty, but energy access can be a development catalyst and should be an Australian priority.

Solomon Islands’ economy is fragile and weak. The experience of Covid-19 has only compounded that, fuelling cynicism and discontent.

“There is no future here in the Solomons,” one Honiara-based student recently told me.

I’m more optimistic. But Solomon Islanders deserve much more than the status quo.