'When caught in a fight between whales, a shrimp gets his back broken.'

'When caught in a fight between whales, a shrimp gets his back broken.' This old Korean proverb has been used to describe Korea being stuck between great power rivalries. As Chinese-US competition intensifies, Seoul is now struggling not to have its back broken, navigating between two whales.

As such, South Korea's President Moon Jae-in is trying to carve out as much economic and strategic autonomy as possible: he has in the last several weeks made key decisions on the US-deployed anti-missile system known as THAAD, indigenous anti-missile systems, missile payloads and an economic diversification plan focused on Southeast Asia and beyond.

The THAAD controversy was a key trigger for Seoul's strategic shift. Last year, Washington and Seoul decided to deploy the anti-missile system to address the immediate security threat from Pyongyang. Beijing saw THAAD as a threat to strategic balance between China and the US and retaliated by imposing unofficial sanctions on South Korea's tourism industry and direct investment in China. Although Seoul and Beijing resolved the THAAD dispute earlier this month, the Moon administration may now feel compelled to reduce South Korean dependence on China for economic growth and, perhaps, on the US for security.

In resolving the THAAD controversy, Seoul announced three 'no's': no additional THAAD deployment in South Korea, no participation in the US-led missile defence system, and no establishment of a South Korea-US-Japan trilateral security alliance. These promises were phrased in a flexible manner, but were received poorly by some in Washington, appearing to create divergence in the allies' approach to regional security. Indeed, Moon said that South Korea should learn to 'say no to the Americans', and has often taken differing positions from US President Donald Trump on dealing with North Korea.

Seoul is concerned about its reliance on Washington and is seeking a more self-sufficient security posture. It has already hinted its desire to regain wartime operational control from the US as early as the 2020s, and publicised a plan to build standalone defence capabilities through 'three-axis defence platform': the Kill Chain, the Korean Air and Missile Defense (KAMD) and the Korea Massive Punishment and Retaliation doctrine. It also showed its aspiration for developing or procuring a nuclear-powered submarine. There was already a clandestine attempt at this in 2003 that was leaked, drawing the attention of the International Atomic Energy Agency.

Furthermore, Seoul decided last week to develop the 'M-SAM' missile interceptor system. Considered to be a major element of KAMD, the M-SAM interceptor system is intended to counter North Korea's Scud missiles. Some favoured the Standard Missile 3 (SM-3) over the M-SAM, but after China expressed its opposition to the deployment of SM-3 in Korea, calling it a 'Maritime THAAD', Seoul became concerned that the deployment of the SM-3 might cause another round of tensions with China.

South Korea is also improving its missile capabilities, with heavier warheads and longer ranges. When the US transferred missile technologies to South Korea in 1979, Seoul agreed in return to limit the missile payload, due to concerns that it might intensify an arms race between the two Koreas. The missile pact, although amended in 2012, still limited South Korea's warhead weight to 500 kilograms, which could not destroy Kim Jong-un's underground bunkers. Washington and Seoul reached an agreement to scrap the restriction last September.

At the same time, Seoul is also trying to reduce its economic dependence on China by diversifying its trading portfolio. China represents a quarter of Korea's trade volume, a fact it was able to leverage during the THAAD controversy. For instance, an estimated three million Chinese decided not to visit South Korea. Losses in that sector will be at least US$6.5 billion for 2017, possibly more.

Korean companies in China such as the Lotte Group also suffered tremendously from the year-long standoff between the two countries. Witnessing the economic slowdown, South Korean economists often referred to 'China Risk' and suggested scaling down reliance on the Chinese market. Moon responded by unveiling a new investment plan during his recent visit to Indonesia: 'The New Southern Policy.' Aiming at strengthening economic relations with ASEAN countries, Moon stated that he will elevate South Korea's relations with ASEAN countries to the level equivalent to those of the US, China, Japan, and Russia. The plan was in fact foreshadowed when South Korean Finance Minister Kim Dong-yeon said that Seoul must lessen its trade reliance on China and the US in an interview with the Wall Street Journal last month.

But North Korea will put a limit on Seoul's search for defence autonomy. With Pyongyang increasingly developing its nuclear and missile capabilities, Seoul has no choice but to rely on the US military alliance to some extent, until it has the capability to fully counter the North.

At the same time, reducing economic dependence on China will also not be an easy task for South Korea. ASEAN countries, although growing rapidly, cannot readily replace China's vital market for South Korean exports. Many South Korean companies that have already built factories in China would have difficulty in moving these capital investments out of China. All in all, China's economic gravity will continue to exert a strong pull on South Korea.

Still, as of 2017 the 'shrimp' is now an advanced second-tier military power and a major trading nation. And while it will be unable to extricate itself from its military and economic ties to the US and China, Moon Jae-in may be able to buy his country a little more autonomy in both spheres, if all goes according to plan. 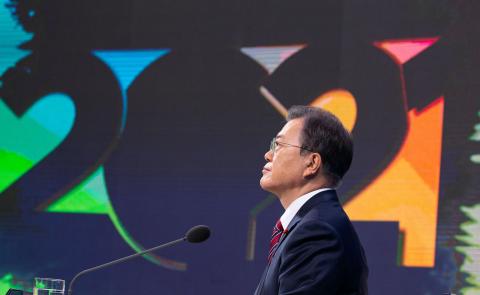