Players – or countries – can send a message in victory and defeat. 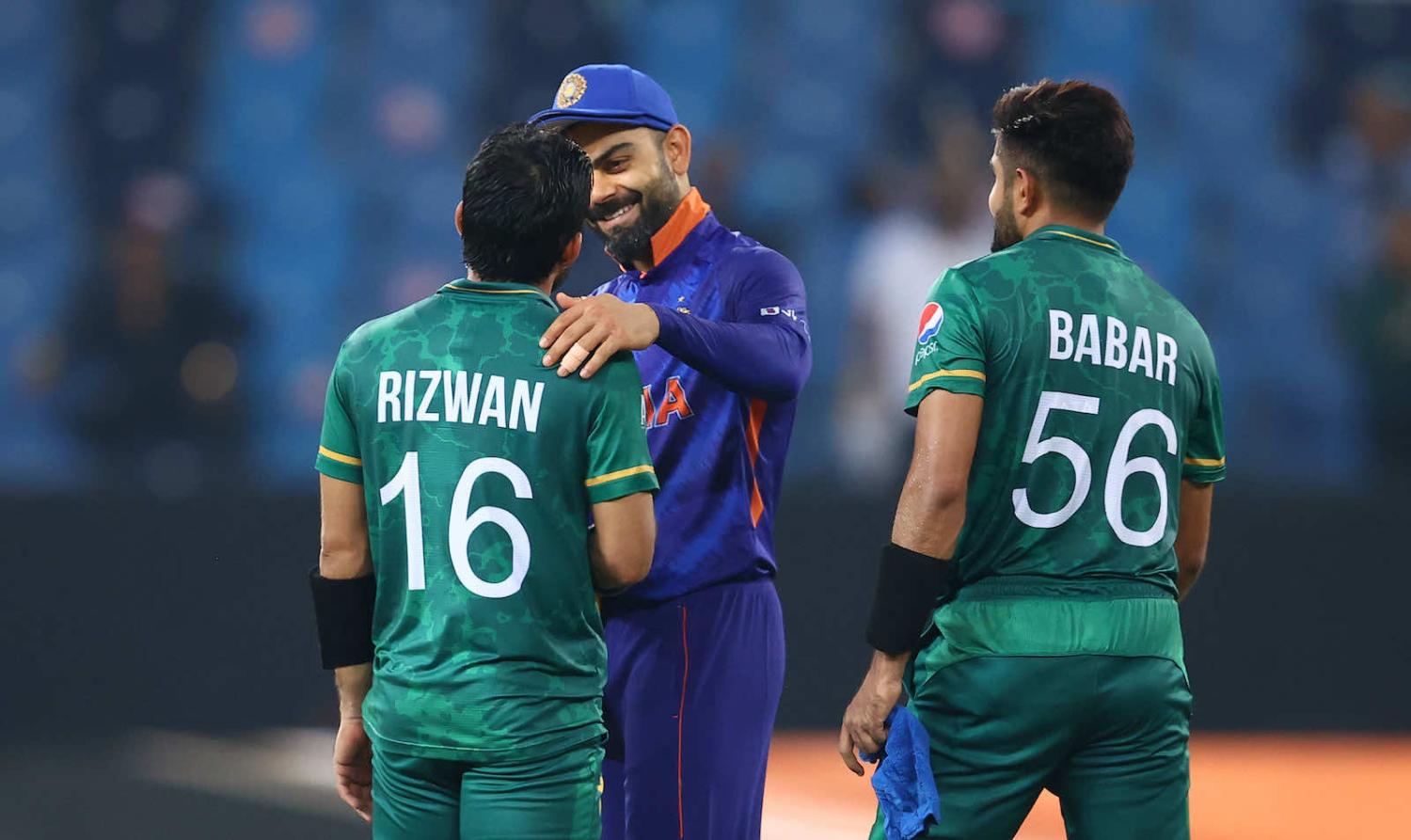 Cricketing salutations can be baffling. Why did India’s men’s team captain Virat Kohli hug Pakistani player Mohammad Rizwan, and team mentor M.S. Dhoni greet Pakistani players, after India’s defeat last week to Pakistan in cricket’s Twenty20 World Cup in Dubai? India’s leaders seemed to be helping Pakistani players ease blockages in the mind about past losses to India. Only a controversy was to erupt after comments about Rizwan performing an Islamic prayer on the pitch as Indian players and thousands of spectators watched. Notably, there was no such prayer after Pakistan defeated New Zealand two days later.

India and Pakistan differ in the way athletes administer nationalist theatre. Unlike Indian athletes, Pakistan’s use of religion in contests with India is steeped in the history of Hindu-Muslim relations. People not familiar with the cultural context in India or Pakistan do not always understand. The latest public demonstrations of piety are not new.

Pakistan’s captain Mushtaq Mohammad had described a 1978 test series win over India as a “victory of Muslims all over the world over the Hindus,” while a later captain Shoaib Malik had thanked “Muslims all over the world” after Pakistan lost to India in the 2007 Twenty20 World Cup. Thus, the script for this latest game had already been written. Only, this time there was anxiety to get the act done quickly to mitigate shame at Pakistan’s 0- 12 World Cup record against India.

Strategy begins and ends in the mind, whether in sport or war … India’s contest with Pakistan, in cricket or hockey, is chasing politics.

For Pakistan’s Interior minister Sheikh Rashid Ahmed, this latest win amounted to a victory of Islam. “Alhamdolilla … It’s the first one,” tweeted Ramiz Raja, chair of the Pakistan Cricket Board. But it was comments by Waqar Younis, a former Pakistan captain and coach, declaring his pride at Rizwan offering prayers before Hindus, that generated the most backlash. Younis later apologised for the remarks.

Amid the mayhem Kohli never showed up. He had bafflingly silenced the Oval crowd at the 2019 World Cup with appeals not to boo Australia’s Steve Smith. Smith was being reminded about the ball-tampering scandal during a test match against South Africa at Cape Town in 2018. Momentary compassion for Smith might have blindsided Kohli. Has any Australian cricketer shown a similar gesture to a beleaguered Indian counterpart? Australians play their cricket so hard that the line between fair play and winning at any cost gets blurred.

Do Pakistani players hug India’s after losing a game? Some are nice. Recall Wasim Raja dressing as a Sikh during Pakistan’s cricket series in India in 1979–80.

Since the 1990s’ terrorist attacks from Pakistan and Indian retaliatory responses have ambushed sport. “I get into revenge mode during a Pakistan game and my blood also boils," said hockey player P.R. Sreejesh after India had defeated Pakistan in the gold medal match in the 2014 Asian Games. At the London Hockey Men’s World League Semi Finals 2017, Indian players and support staff wore black arm-bands to mourn soldiers killed in terrorist attacks. Home Minister Amit Shah dubbed India’s victory in the 2019 Cricket World Cup “another strike on Pakistan.”

There has to be a grievance behind every losing athlete’s handshake and hug. Kohli would have been hurting. It is possible that Kohli and Dhoni acted politically. Perhaps they had been tutored about India’s turbulent geopolitics and were followed instructions from somebody?

China is pressing India from the east. The Taliban has voiced support for Muslims in Kashmir. This may have emboldened Islamists to attack Hindus in Bangladesh during Durga Puja, their most important religious festival, and encouraged attacks on civilians in the Kashmir valley (some Kashmiris cheered Pakistan’s victory). When fires have engulfed the bush what better than using cricket to seal holes in fragile truces with China and Pakistan?

Strategy begins and ends in the mind, whether in sport or war. Treating sport as just that is poor science and poorer entertainment. Fighting without bullets does not make sport any less. India’s contest with Pakistan, in cricket or hockey, is chasing politics.

It was not always like that. In 1954–55, when ties were less fraught, thousands of Indian spectators were allowed into Pakistan to watch a test series and were feted by hospitable locals. The Tribune newspaper, so it was told in a recent article in The Spectator, “was surprised to see the Mall Road and Anarkali Bazaar crowded with Indians and Pakistanis locked in sentimental embraces, some with tears in their eye, reviving all memories of their days together.” The Spectator went on to quote England player Wally Hammond who said 60 years ago: “If every cricket match between India and Pakistan can be played without a ring of machine guns to keep the onlookers from rioting, then I feel the prestige attaching to the game is great.”

Even after the outbreak of the Kashmir insurgency in 1990, tempers were calm. In 2004 the Indian high commissioner was to tell Pakistani diplomat Shahryar Khan: “20,000 Indian cricket fans visited Pakistan. You have sent back 20,000 Pakistan ambassadors to India.” Pakistan’s President Pervez Musharraf watched a cricket game in New Delhi in 2005, leading to a summit with Prime Minister Manmohan Singh and the decision to open Kashmir’s borders. After Prime Minister Syed Yousaf Raza Gilani attended a cricket match in Chandigarh in 2011, Pakistan allowed a visit to Pakistan by an Indian team to investigate the 2008 Mumbai terror attacks.

This latest victory means much to Pakistan. “The win over India allows the entire country to forget the troubles of their routine life,” Pakistani newspaper Dawn declared. “29 years of hurt” ended, asserted BBC. After decades of frustration Pakistan might have wanted this victory a little more than India.

Any political truce over diplomatic appointments looks to have ended. A change of government should mean politicians-turned-diplomats resign.
Greg Earl 28 Mar 2019 14:00

Aid and development links: How to sell aid to voters, taxing remittances, edible drones and more

Is it more effective to appeal to the national interest or to ethics when discussing aid with the public?