Business with Donald, shared history with Xi and a Pacific ploy are revealing of the former PM’s foreign ambition.

From media baron Rupert Murdoch to leadership rival Peter Dutton, Malcolm Turnbull’s new memoir* released this week is partly built on his self-assessment that he can size up a bully better than most.

“The one thing I’d learned with bullies is that sucking up to them is precisely the wrong way to go,” the former prime minister observes about preparing for meeting US President Donald Trump.

But it is the revelation of two previously unreleased letters to the two most powerful men he has ever had to deal with that best frame the foreign policy of a short-lived prime minister trying to punch above his weight in a changing world.

On 27 April 2018 Turnbull wrote to Trump to head off tariffs on Australian steel exports to the US but in doing so reveals his assessment of the president: “Like Kerry Packer (a media tycoon and former Turnbull mentor), he is more a listener than a reader, so to be effective a letter has to be short and punchy and written not just to be read, but to be read aloud – more like a script.”

And so, with ample bold letters and italics, Turnbull tells the man he addresses as Donald:

A massive US$25 billion surplus in your favour! How good is that?

Just a month later on May 22 Turnbull is back at his desk penning a noticeably more deferential letter to Chinese President Xi Jinping, which he reveals then Foreign Minister Julie Bishop personally delivered to her Chinese counterpart.

In the end Turnbull implies he got the measure of Trump.

“China and Australia are good friends. We share a region and our futures are inextricably linked. It goes well beyond our economic relationship. We are family,” Turnbull writes in a bid to fix the damage caused some months earlier when he had co-opted a famous 1949 phrase of Mao Zedong to explain Australia’s crackdown on foreign influence peddling in domestic politics.

“I reminded Xi of my longstanding interest in Chinese history and culture and that I had used those lines many times in the past … It was intended to convey respect,” Turnbull says of the letter designed to restore the bilateral relationship.

In the end Turnbull implies he got the measure of Trump: “For all our differences, as two businessmen, we spoke the same language.” But having gone from a Sinophile investment banker in China in the 1990s to the prime minister whose last policy action was to ban Chinese telecommunications company Huawei, Xi proves a more difficult nut to crack. And so, Turnbull ironically partly blames his more uncertain China legacy on Australian business. “They’ll always blame their own government if (China) problems arise – even if the problems have nothing to do with government policy,” he complains of an elite amongst whom he once prominently numbered.

Long serving Japanese Prime Minister Shinzo has seen off five Australian counterparts and had more meetings with Donald Trump than most foreign leaders. Nevertheless, Turnbull judges that Abe got Trump wrong by trying to flatter him and then made himself vulnerable to the US president unsettling him with constant references to the Second World War.

Abe may be even more interested to see Turnbull claiming that he was the key figure in the survival of the Trans-Pacific Partnership (TPP) trade group after the Trump administration pulled out.

Abe has claimed the revamped TTP-11 as one of the biggest achievements of his more assertive Japanese foreign policy, telling the Diet in 2018: “I will spread to the world a 21st-century economic order based on free and fair rules, serving as the standard-bearer of free trade.”

But Turnbull says the TPP was saved over a nightcap with New Zealand Prime Minister John Key and Abe had to be later persuaded to run the risk of upsetting Trump by keeping the agreement alive. Turnbull writes after a meeting in January 2017 that Abe “agreed to join me in taking the lead on TPP negotiations over the coming months and we agreed to work together … I got the sense Shinzo was cautious about being overly bold with Trump.”

“There are a lot of things you do in politics that would have likely happened anyway,” he writes of his claim to a major trade liberalisation legacy, “this was not one of them.”

Prime Minister Scott Morrison says he has more important things to worry about these days amid a pandemic than read disputed accounts of how he came to replace Turnbull – although there is certainly plenty of carefully documented history in this book to read.

But it will be interesting to see what Morrison makes of Turnbull devoting an entire chapter – bluntly titled “The Pacific Step-Up” – to the foreign policy initiative which Morrison has sought to make his own.

Turnbull’s genuine long-term concern about climate change allows him to have the last word on Morrison’s Pacific policy.

“It’s good to see that Prime Minister Morrison has continued with the Pacific Step-Up I began in 2016,” Turnbull writes, just in a case a casual reader misses the point of what seems to be a take-down of Morrison’s efforts to personalise his idea of a Pacific family with shared interests in rugby and Christianity.

Turnbull did propose stepping up engagement with the Pacific island nations in 2016 and this was reinforced in similar low-key language in the 2017 Foreign Policy White Paper he launched.

But Morrison has claimed ownership of the now firmly capitalised Pacific Step-Up policy, has put the real money on the table for substantial infrastructure spending and has tilted Australia’s development aid spending further away from Asia towards the Pacific.

Arguably both these politicians have this wrong because the step-up language tends to underplay the significant role that Australia has always played in the Pacific.

But Turnbull’s genuine long-term concern about climate change allows him to have the last word on Morrison’s Pacific policy when he notes: “To many on the right of Australian politics, climate change is a political or ideological issue. To those in the Pacific, it is a matter of survival.”

By his own fulsome account Turnbull strode the hallways of international summits like a man born to drafting sub-clauses in the national interest. In one classic example he details with a flourish how he used an offhand comment from Trump to manoeuvre a German official into using Group of 20 communique language rejected by Chancellor Angela Merkel.

But given the attention devoted to claiming the Pacific legacy (above), it is surprising how perfunctorily Turnbull treats the one summit he actually hosted on his own terms – the 2018 meeting of Southeast Asian leaders in Sydney.

Turnbull played a genuine role brokering this unusual out of region summit of the 10 Association of Southeast Asian Nations (ASEAN) leaders as part of a broader Australian effort to refurbish Asian ties beyond China.

He says stronger ASEAN ties are important but seems to instinctively retreat from pan-regionalism to warmer individual meetings with Indonesia’s Joko Widodo and Singapore’s Lee Hsien Loong on other occasions. It is an interesting – if unsurprising ­– insight into how diplomacy is really transacted despite the elevation of ASEAN in Australia’s formal hierarchy of interests.

Turnbull’s frequent references to the ancient Greek statecraft on great power rivalry known as the Thucydides trap has long been the subject of much eye-rolling. 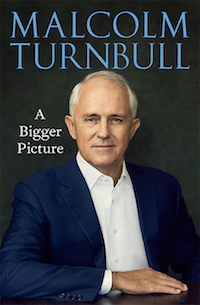 But it seems this was an arcane interest he believes he had in common with China’s Xi and thus a subtle way to address more serious modern issues about China’s growing assertiveness.

Turnbull tells of discussing regional security with Chinese Premier Li Keqiang over dinner at his house in Sydney only to have Li acknowledge “there was a running joke that President Xi and I had common passion for the history of the war between Athens and Sparta.”

It would be fascinating to know what the Chinese diplomatic record made of the Australian prime minister then going on to use this rare time with China’s number two leader to discuss the fifth volume of the History of the Peloponnesian War.

But it might help explain why Li turned up at a football match soon after bemusedly wearing the colours of both the Sydney Swans and Port Adelaide.

*A Bigger Picture by Malcolm Turnbull was published this week by Hardie Grant Books.

Show Comments
Previous Article
Europe hasn’t fallen for China – if anything, it’s the opposite
Next Article
Negative oil prices: Why Asian nations may struggle to take advantage