A fresh abduction case raises serious questions, not for the first time, about the reach of Thai authorities. 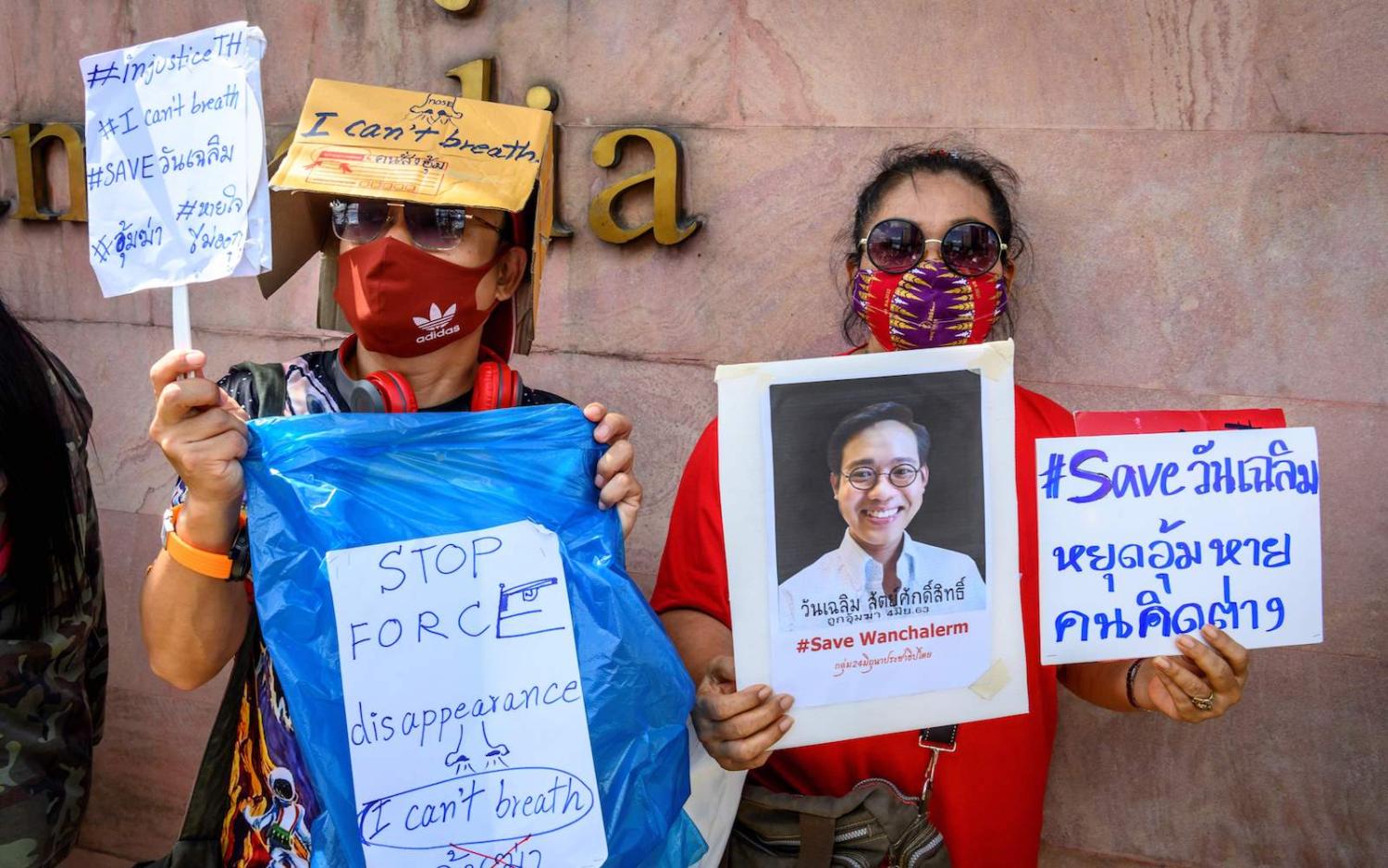 On 4 June, Wanchalearm Satsaksit – a self-exiled Thai political activist living in Cambodia’s capital, Phnom Penh – vanished. He was almost certainly abducted. CCTV footage shows him taken away in a black car. His sister, who was on the phone with him when he was seized, told BBC Thai that he cried out, “I can’t breathe” before the line was cut. Three witnesses identified him from photographs as the abductee. And a security guard at the scene said the kidnapper was carrying a gun.

Wanchalearm went missing one day after publishing a blistering attack on Thailand’s prime minister (and former junta leader) Prayuth Chan-ocha, and three weeks after Thai police visited Wanchalearm’s mother in north-east Thailand, asking her where he was.

The case raises serious questions, not for the first time, about the reach of Thai authorities beyond its borders, and the tendency of its neighbours either to cooperate or look the other way.

Cambodian authorities initially refused to investigate Wanchalearm’s disappearance. Despite widespread reporting of the story, they feigned ignorance. Cambodian police spokesman Chhay Kim Khoeun said, “We don’t know about it, so what should we investigate?” And government spokesman Khieu Sopheak suggested the reported disappearance could be “fake news”. After four days of sustained pressure from activist groups and negative foreign press coverage, Cambodian officials relented – a little. Foreign affairs spokesman Koy Kuong said authorities “will verify the news”, while the police said Wanchalearm was not in Cambodian custody.

If the reports of Wanchalearm’s detention and return to Thailand prove true, it will be but the latest in Bangkok’s cooperative efforts with its neighbours to extradite each other’s dissidents.

Thai officials obfuscated but did not deny outright their involvement. Asked if the Cambodian police had seized him acting on a Thai arrest warrant, Thai police spokesman Krisana Patanacharoen replied Thai police had yet to speak to the Cambodian police on the matter, though he confirmed they had earlier sought Wanchalearm’s extradition. These earlier statements give the lie to Prime Minister Prayuth’s claim on 9 June that the Thai government didn’t know where Wanchalearm had been, but “was ready to help [his] family if it could tell him”.

Despite Phnom Penh’s denials, it seems probable either its security forces snatched Wanchalearm in response to the Thai extradition request or, less likely, that it had acquiesced to a Thai operation to capture him. Although a personal or business dispute can’t be ruled out, these seem most unlikely, given the Cambodian government’s resistance to investigate.

If the reports of Wanchalearm’s detention and return to Thailand prove true, it will be but the latest in Bangkok’s cooperative efforts with its neighbours to extradite each other’s dissidents. In 2018, Thailand repatriated critics of the Cambodian government. The same year, the Lao government said it would help Bangkok track down members of a Thai dissident group operating on its soil. In 2019, after Bangkok deported a Vietnamese blogger, Hanoi reportedly returned three Thai activists. And Malaysia repatriated at Bangkok’s request an asylum seeker registered with the United Nations High Commissioner for Refugees (UNHCR).

Wanchalearm’s sister told the BBC that she holds out little hope he’s still alive. And her fear is understandable. She would, without doubt, have heard about the fate of members of a small Thai opposition group whose leaders were based in Laos, the Organisation for a Thai Federation (OTF), and of their close associates.

The OTF was a small, radical, underground network seeking to turn Thailand into a republic. It wasn’t as fortunate as another Thai anti-monarchy group in Laos that eventually made it to France. Its calls for Thais to disrupt the funeral of Thai King Vajiralongkorn’s father, Bhumibol, and its close association with those advocating armed uprising to achieve its goal probably went too far. Media reporting at the time showed that Thai authorities were genuinely concerned that they would carry out their threats, and were determined to stop them.

In 2016 and 2017, two OTF close associates in Laos were snatched by unknown assailants, never to be seen again. Eye witnesses to one abduction said that he was tied up, tasered and seized by 10 Thai-speaking men. Social media reports he was later killed. In 2018, three other associates in Laos disappeared. The bodies of two were found floating in the Mekong River which marks the Thai-Lao boundary, handcuffed, and with their faces smashed, presumably to hinder identification. And, as mentioned earlier, in 2019, OTF leader Chucheep Chiwasut and two compatriots were reportedly arrested in Vietnam for travelling on forged Indonesian passports and extradited to Thailand – nothing has been heard of them since.

Nevertheless, there are some grounds to hope that, if he is in Thai hands, Wanchalearm might not meet the same fate. In January this year, four other OTF members, who had not advocated disrupting King Bhumibol’s funeral, were given sentences of two-three years’ gaol; one of whom was very likely the woman repatriated from Malaysia.

It appears clear that Bangkok will try to get its hands on Thai dissidents residing in neighbouring countries, and that its mainland ASEAN counterparts will facilitate its efforts. Even UNHCR registration might not be enough to save them. Fearing for their safety, some may seek asylum in Western countries, including in Australia. And any high-profile or widely publicised cases would undoubtedly create bilateral tensions, particularly where issues concerning Thailand’s monarchy might be involved.

Previous Article
North Korea may have benefited from the pandemic after all
Next Article
COVIDcast: Xi Jinping and Covid-19

After being issued a yellow card, Hanoi must look to its neighbours and international laws for the way forward.
Katherine Mansted 13 Feb 2018 13:03

While cheerleaders dance in PyeongChang, officials in Pyongyang are pushing ahead with a nuclear and ballistic missile program.