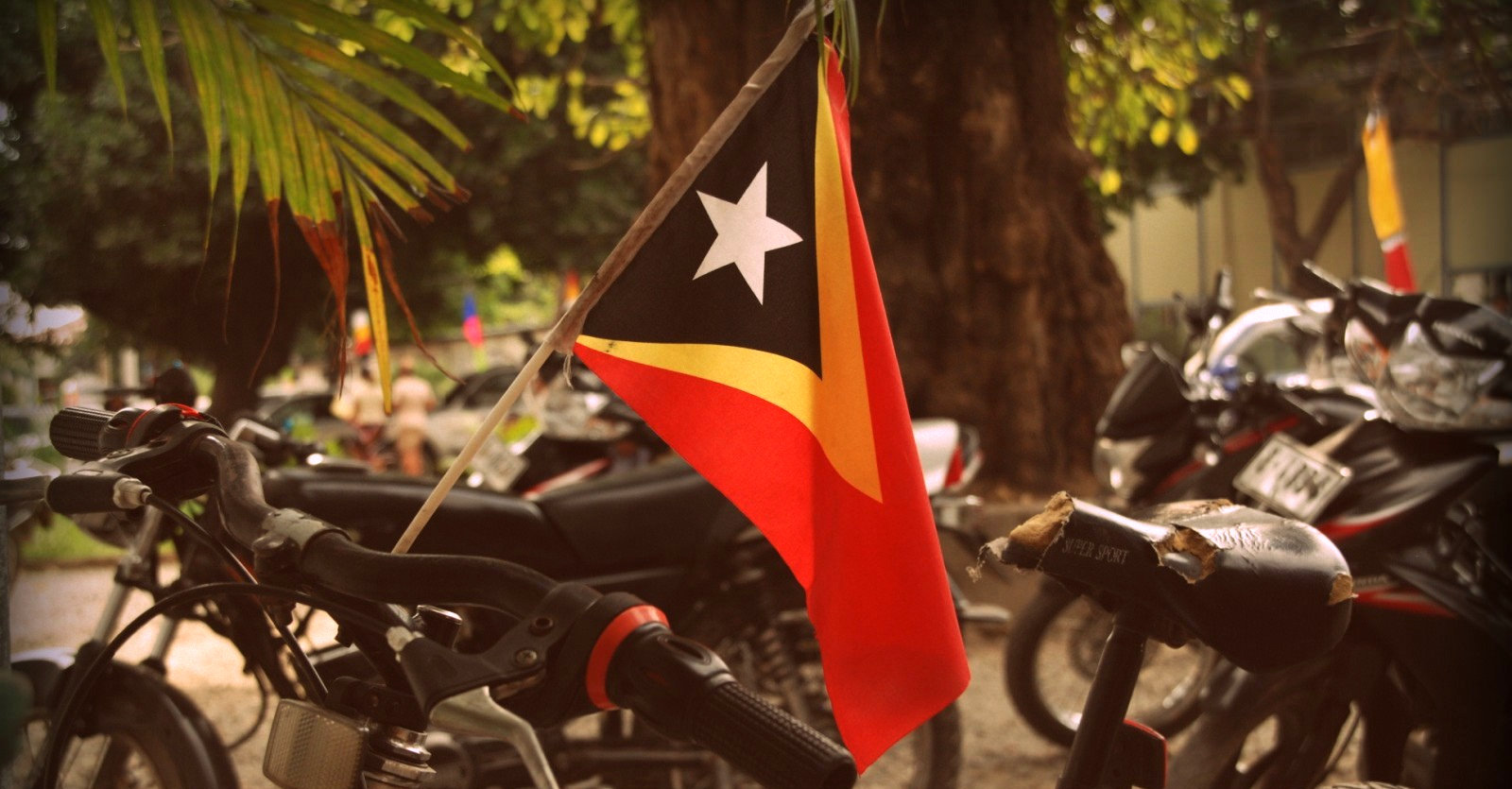 But conflict, rejection, and the promise of a better life abroad saw the dispersed Hakka-descended Chinese-Timorese spread themselves further, emigrating to Portugal, Australia, and beyond ­– building the little-known Chinese-Timorese diaspora.

Many Chinese-Timorese people experience discrimination – from the subtle over-charging for vegetables in the market and insults hurled from bored youths street-side to more sinister acts of violence.

The age-old stereotype of the entrepreneurial, ladder-climbing, Chinese businessperson prevails; during Timor-Leste’s centuries as a Portuguese colony, the Chinese-Timorese children of Chinese immigrant business-owners made up the majority of school populations, because Timorese families couldn’t afford the fees that were charged by the colonial administration.

“They think, oh the Chinese, we only do business, we’re only good at business, they have money, they can put their children in school,” says Teresa Ku, a 29-year-old Dili-born Chinese-Timorese business graduate, who grew up attending the old Chinese temple and the Sunday church service with her Catholic Hakka family.

“That’s why when you went to a school back then, it was like, 95% of the classroom is Chinese-Timorese, but if you go now, you can count one or maybe two students in the classroom.”

It’s not just the free education in independent Timor-Leste that caused that switch – Timor-Leste’s historic conflicts in 1975, 1999, and 2006 saw the Chinese-Timorese singled out for being different. Their businesses were targeted and burned, their families teased and abused, and many took the opportunity to flee. They felt threatened, Teresa says:

The situation in Timor forced them to move out for their safety. There used to be more, but many have emigrated. They saw a better life for their family.

Centuries of Chinese in Timor-Leste

Today, there are anywhere between 500 – the number of Timorese people who list Chinese as their mother tongue – and 3,000 people – the number of legal and illegal Chinese residents of Timor-Leste estimated by Timor-Leste’s immigration department. Most are Hakka Chinese, the ethnic group who migrated from northern to southern China between the fourth and thirteenth centuries, who are known for living scattered around the world.

Merchants from China were the first foreign visitors to Timor-Leste, driven by the lucrative trade of the oil and timber of the sandalwood tree native to Timor island.

In 1436, almost a century before Portugal colonised Timor-Leste, the Chinese explorer Fei Sin reported that 12 trading ports had been established, where commerce in sandalwood thrived. With the commencement of steamship voyages between Dili and the then-Portuguese colony of Macau in the 19th century, migration increased. Chinese schools and societies bloomed, and the tranquil Guan Yu Temple – attended by Teresa as a child with her mother – was built in 1928.

While Chinese-Timorese families can trace their lineage back four or five or more generations, many still experience discrimination from other Timorese – from the subtle over-charging for vegetables in the market more common with foreigners and insults hurled from bored youths street-side to more sinister acts of violence.

Teresa remembers a neighbour who was forced to relocate her barbecue fish stall from a popular beachside market corner after a fellow vendor attacked her with an arrow and another who moved permanently to Australia after her hand was cut off. Last year, Teresa’s brother was assaulted by a group of men on the street.

“You’re born here, you grow up here, you speak the same language, but still your skin doesn’t show that you’re pure enough like them,” says Teresa.

It’s like a virus. When one is targeted everyone has to be careful. They call me Chinese and I just pretend I don’t hear; I wouldn’t challenge them after what happened to my brother.

She’s pragmatic about it and says her family is lucky. In 2002 when Timor-Leste’s independence was restored and many Chinese-Timorese refugees returned home, they found their houses occupied by indigenous Timorese.

“They came back, and people had taken over their houses, and they say we’ll give your house back if you pay this compensation, and it’s always a lot of money,” says Teresa. “And you have the certificate to the house to show proof, but they won’t go until you pay them. What’s the point [of going back] if you don’t have your house anymore?”

Teresa’s family faced other challenges. Her father had a stroke in 1998 and their humanitarian application for Australian permanent residency was rejected in 1999, mere months before Timor-Leste successfully voted for independence from occupying Indonesia.

In 2008, Teresa’s father travelled back to Australia for her brother’s university graduation, where he was diagnosed with kidney failure, ultimately leading to a grant of Australian permanent residency on humanitarian grounds, which enabled Teresa’s mother and two younger siblings to join him.

Timorese refugees and residents have drifted into and out of Australia since the end of the Second World War. Thousands were evacuated to Darwin in 1975 during the struggle for independence from Portugal and the subsequent invasion by Indonesia. Of these evacuees, 1,647 later became Australian permanent residents. Migration continued at a trickle through the 1980s and 1990s, before a swell of more than 4,000 new refugees received permanent residency on humanitarian grounds in 1999 – during the Timor-Leste Crisis. The diaspora in Australia includes both Chinese-Timorese and indigenous Timorese.

The tiny country has long attracted interest from its larger neighbours.

It’s alleged China tried to provide money and arms to the Timorese resistance fighters who battled occupying Indonesia between 1975 and 1999 – an occupation tacitly supported by Australia in part due to the fear of communism spreading into the newly independent state. Indonesia’s extermination of at least 500,000 people believed to be members of the PKI between 1965 and 1966 may have led Australia to believe its tiny, vulnerable neighbour was in safe allied hands as a province of Indonesia.

When Timor-Leste’s independence was established it was China who first opened diplomatic relations with the country, funding the construction of three prominent government buildings in the early 2000s.

Chinese construction firms have since been contracted for major infrastructure projects, including a national high-voltage electricity grid, roads and an airport for the US $250 million Tasi Mane LNG project on the country’s south coast and a large container port at Tibar, near the capital Dili. And rumours abound that Timor-Leste will seek Chinese funding for the development of the Greater Sunrise oil and gas resources in the Timor Sea.

China’s growing influence in Timor-Leste has caught the attention of international commentators, which in turn has drawn rebuke from the young country’s leaders. In September, former Timor-Leste president Jose Ramos-Horta lambasted writers for being “extremely inaccurate and misleading” in describing China’s influence in Timor-Leste. “It’s a cliché and it’s silly,” he told the South China Morning Post.

Teresa lives with her husband, their son and her husband’s family in a central suburb of Dili, just a couple of streets down from Guan Yu temple. She says they want to try and move to Australia next year.

“If I didn’t meet my husband I wouldn’t live here anymore,” she says, frankly. “I just want to complete my [remaining student visa] obligations with the Australian government and then I’m thinking of applying for permanent residency. Try a new life there.”

Her 16-month-old son toddles through the courtyard of the family’s compound, babbling quietly to himself in a barely intelligible language. It could be English or Hakka, which he speaks with his mother; Tetun, which he speaks with his Timorese cousins; Bahasa Indonesian, which his parents speak fluently; or Portuguese, which he uses with his grandfather ­– a “Timorese-Timorese” from the far-eastern district of Lautem, where the national language Tetun is limited. Teresa says her parents-in-law have Portuguese blood, which illuminates the curiously mixed Timorese identity.

“If you ask me, I say I’m Timorese,” she says. “Then people ask why I have lighter skin. I say I’m a mix. That’s how it is. It’s a multicultural society. It keeps us together with our own culture and background, it’s how we show our identity.”