On the trail of the Pope in Japan

The Catholic Church maintains a minimal presence in Japan, so what was Pope Francis doing there? 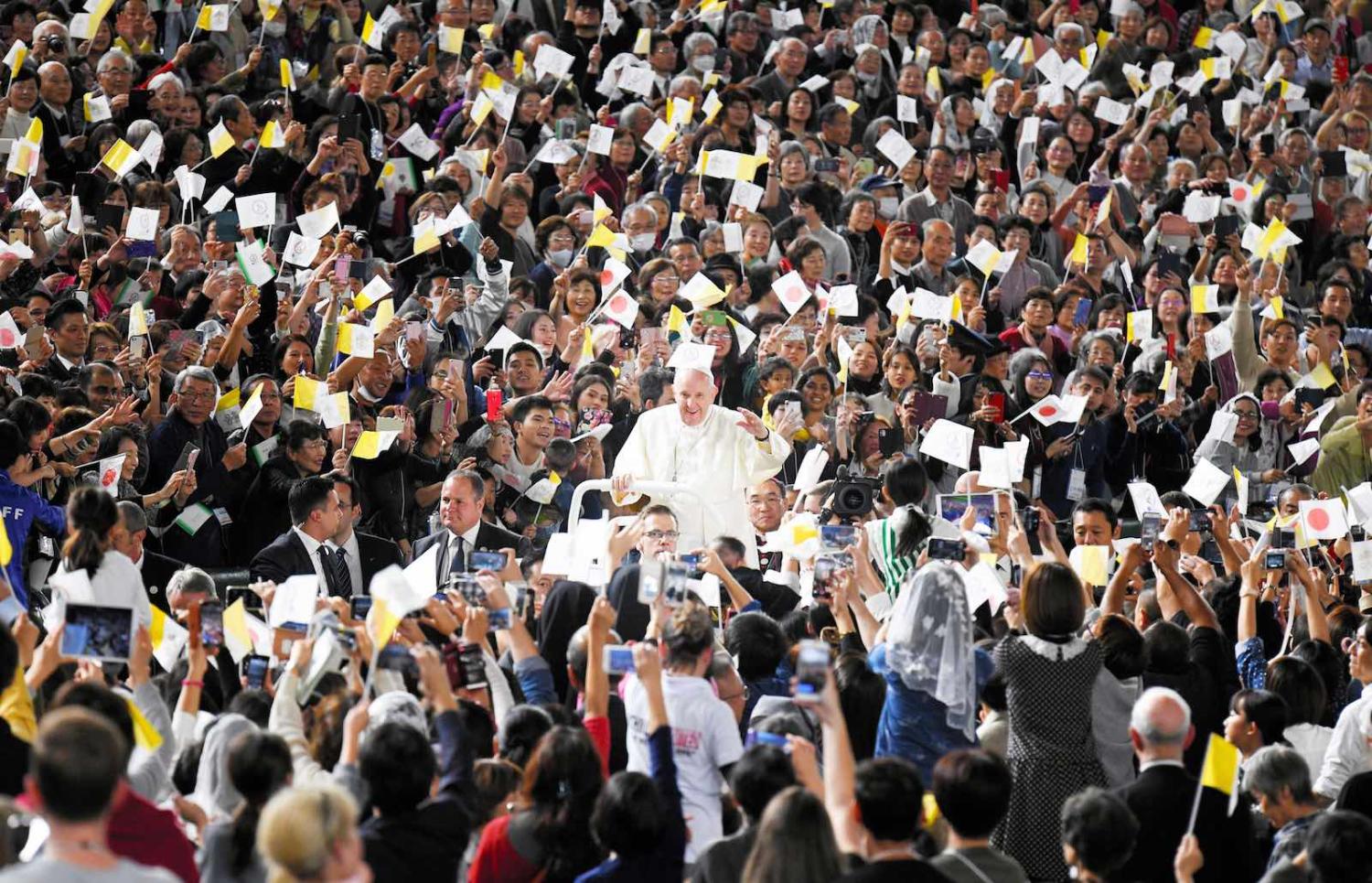 Pope Francis visited Japan between 23 and 26 November. It was a busy time that followed directly on from the Pope’s equally busy visit to Thailand. He toured Nagasaki, Hiroshima, and Tokyo. He met with Emperor Naruhito and Prime Minister Abe Shinzō. He spoke with survivors of the atomic attacks, and of the earthquake-tsunami-nuclear meltdown that rocked Fukushima in 2011. He met with Japan’s bishops and with staff and students at the Jesuit-run Sophia University in Tokyo. He is the first pope to visit Japan since St John Paul II in 1982.

The Catholic Church maintains a minimal presence in Japan. Less than 0.5% of the Japanese population is Catholic.

So, what was Pope Francis doing there?

He was almost certainly following self-consciously in the footsteps of St. Francis Xavier, who like Pope Francis belonged to the Jesuits, and who brought Christianity to Japan in 1549. The ensuing period is often referred to as Japan’s “Christian century”: converts to Christianity numbered in the hundreds of thousands, and a number of feudal lords sent emissaries to the Vatican, before a brutal crackdown in the 1630s all but ended the Christian presence in Japan. The government committed in the 1870s to respecting and protecting religious freedom; Pope Francis doubtless hopes (and prays) that his visit might spark Japan’s second “Christian century”.

Whether this will eventuate remains to be seen. Most Japanese celebrate Christmas but do so only commercially. Most also profess fidelity to both Buddhism and Shinto, but beyond a visit to a Shinto Shrine on New Year’s Day or observance of Buddhist funeral rites, the vast majority of Japanese pay no attention to religious dogma, practice, or ritual. Japan is a most secular nation.

Be that as it may, the Japanese lavished on the pope a rock-star reception. He met everywhere with extremely enthusiastic crowds, and very many wore official “Pope in Japan 2019” merchandise, including shirts, caps, and windbreaker jackets. 50,000 attended the Holy Mass he celebrated in Tokyo Dome on 25 November.

The visit yielded some surprises. For example, Abe announced at a papal function, which included foreign diplomats and dignitaries, that not only is Deputy Prime Minister Asō Tarō a practising Catholic, but that Asō shares his baptismal name (Francis) with the pope.

The pope’s concern for “all life” cut in other ways. He urged on Abe a rethink of the death penalty.

Many of the pope’s words and gestures fell under the basic message of “protect all life”. In a meeting with Abe and again in speeches in both Nagasaki and Hiroshima, he denounced nuclear weapons as “immoral”. This message sits comfortably with the Japanese people, whose aversion to nuclear weapons is palpable.

The pope also expressed solidarity with the Japanese government’s efforts at resolving the issue of Japanese nationals abducted by North Korea in the 1970s and 1980s. It must be pleasing for Abe to be able to claim recourse to the pope’s moral authority.

The pope’s concern for “all life” cut in other ways. He urged on Abe a rethink of the death penalty. It was perhaps symbolic that the world’s longest-held death-row inmate, Hakamada Iwao, attended Mass in Tokyo Dome. (Hakamada was on death row from 1968 until his release in 2014.). The pope also urged the Japanese to “extend the hand of friendship” to refugees, and by so doing called for a far greater refugee intake.

The pope met with the newly enthroned Emperor Naruhito. He thereby continued a papal-emperor connection that is traceable back to Pope Pius IX, who in the mid-1870s wrote to Japan’s Meiji Emperor and thanked him for having lifted the ban on Christianity. The connection was deepened by Naruhito’s grandfather, the Emperor Hirohito, who in the weeks leading up to the outbreak of the Pacific War urged his government to send an emissary to the Vatican, in the hope that the pope might somehow avert war. (The emissary did not arrive in the Vatican until April 1942, some four or five months after the outbreak of war).

The Japanese press reported on every one of the pope’s moves while he was in Japan. Most, including the daily newspaper Asahi Shimbun, acknowledged and accepted that Francis aimed ultimately at Catholic converts. Many, including the Tōyō Keizai, have commented on Francis’s ability to express himself simply and have noted the deep impression he has left in Japan.

The reception has not been universally positive. The literary magazine, Bungei Shunju, reminded its readers of what it called the Catholic Church’s “dark past”: the worldwide cases of Catholic clergy’s sexual abuse of children. It noted that a number of Japanese have made such claims against priests, and recorded its hope that Pope Francis’s visit might mark the first step towards closure for all concerned.

Also, some in Japan did not take kindly to the pope’s abovementioned suggestion concerning refugees. Many twitter accounts in Japan criticize the pope for having ventured uninvited into Japanese policy.

It remains to be seen whether Pope Francis will achieve his objectives. What does seem certain is that an overwhelmingly secular nation regards his visit as the second major global event (after the Rugby World Cup) in Japan this year.

Previous Article
As Facebook caves to Singapore censorship, the writing is on the wall
Next Article
An upbeat mood in Buka as Bougainville waits for a result

We’re having a break: light publishing over the New Year

Best wishes for the season from all of us here at The Interpreter. Regular publishing will resume 7 January.
Sam Roggeveen 3 Feb 2017 10:19

In an environment of such unpredictability, it is more important than ever that our leaders hold fast to a sense of what ultimately matters to Australia.
Alan C. Tidwell 6 Nov 2020 11:00

Next steps in advocating for the Pacific Islands Forum

The island nations must get out to “sell a story and ideas” in Washington, and beyond.