Trump’s State of the Union: A preview

State of the Union speeches are traditionally dull affairs. This one could be the most bizarre in US history. 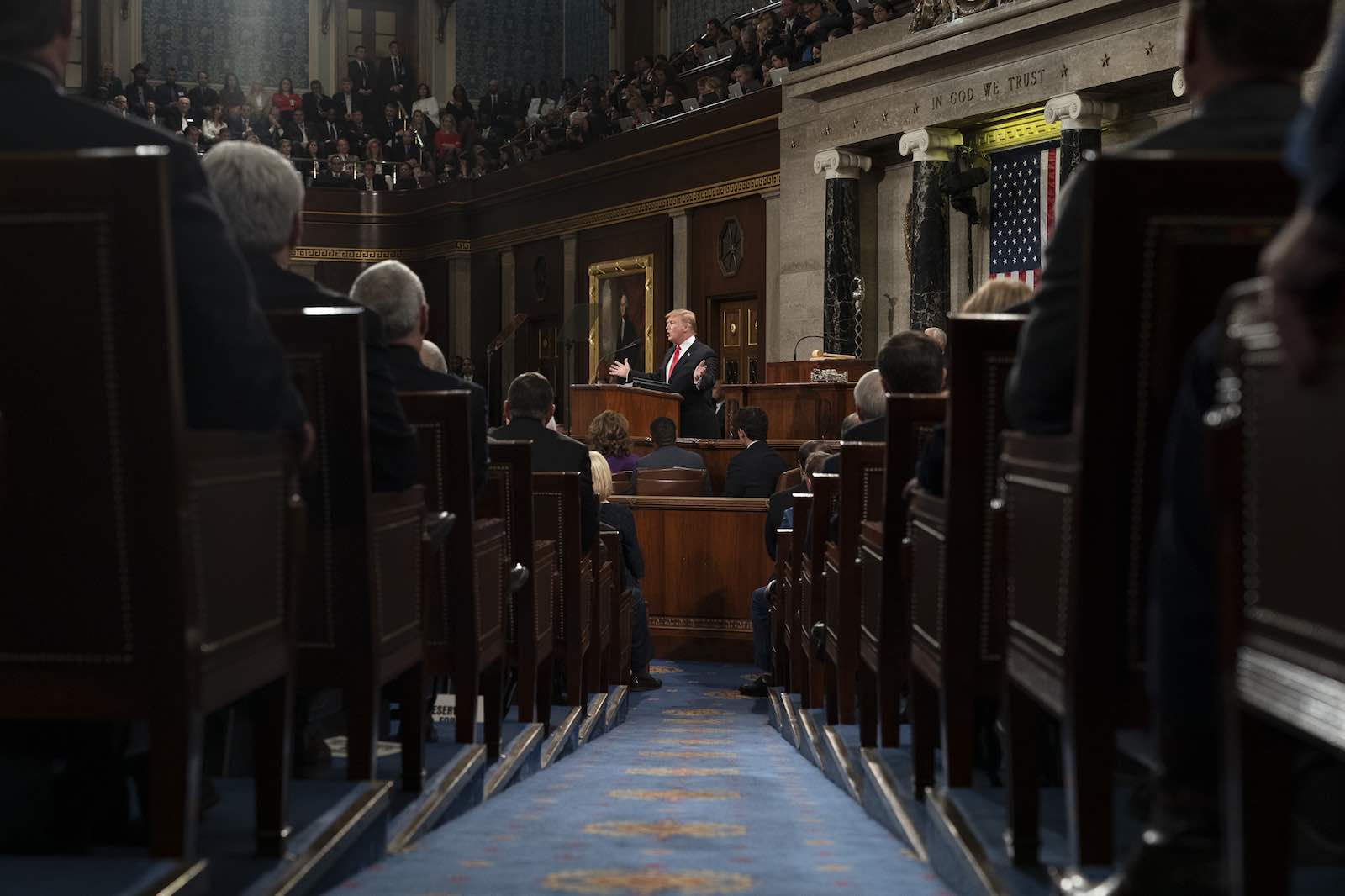 Next Tuesday night, US President Donald Trump will deliver America’s annual State of the Union address before a joint session of Congress – the Senate and the House of Representatives combined. The address descends from a requirement in Article II, section 3 of the US Constitution. Until Woodrow Wilson’s presidency, US presidents delivered a written message which was usually quickly forgotten. Since the 1910s, however, the occasion has evolved into a major presidential address before the full Congress, plus all the justices of the Supreme Court, the president’s cabinet, and the military’s Joint Chiefs of Staff.

Usually these addresses allow the president to tout successes and lay out legislative and larger national goals for the coming year. Interests fight hard to have a line in the address representing their concerns: will the president mention education, health care, infrastructure, Israel, regulations, and so on? In the Trump era, the State of the Union has also acquired a reality-show dynamic, as a president known for his rambling, profane, disorganized speaking style is forced to grapple with the lucidity demanded by an event shrouded in the majesty of American self-government.

The following is a quick preview of what one might expect on 4 February, plus one suggested issue that ought to be in the address but likely will not be.

Trump, unsurprisingly, has taken his impeachment very badly. When former US President Bill Clinton was impeached, his strategy was to ignore it and focus on governing. Trump, of course, is the opposite. Strongly driven by revenge and perceived insult, Trump will almost certainly spend substantial time raging against his trial. It will be the most disturbing part of the address, and likely mark this as one of the most bizarre State of the Union speeches in US history. Expect Trump to repeat widely debunked conspiracy theories, attack House Democrats in personal terms, and obliquely warn Republican Senators not to vote to convict him.

Trump is up for re-election this fall and will likely shape the address for that purpose. Rabidly partisan and a gleeful breaker of norms, he has routinely – and inappropriately – blended government and campaign events together. Plus, his presidency’s legitimacy is directly challenged by the current impeachment proceedings. With his future at stake, he will likely ignore the expectation to be non-partisan and use the event and its huge audience to again mix government and campaign. This is the first major event of his re-election effort.

US voters rarely cast their ballots over foreign policy issues. The State of the Union is therefore often a laundry list of a president’s domestic policy interests and goals. Trump will be no different. First, he will relentlessly talk up the successful economy and claim credit for it, despite only passing one major piece of legislation, the 2017 tax cut. Then he will say all things to all people on programs. He will promise to protect health care, build the Mexican border wall, end the opioid crisis, cut taxes, protect the environment, and so on.

Strongly driven by revenge and perceived insult, Trump will almost certainly spend substantial time raging against his trial. It will be the most disturbing part of the address, and likely mark this as one of the one the most bizarre State of the Union speeches in US history.

I see two possible Trump alterations of this familiar pattern. First, stylistically, he will likely claim outlandishly fantastic domestic triumphs. Trump exaggerates constantly, and with so many people watching in an election year, he will be even more unglued from reality than usual. Second, substantively, Trump may speak solely to his own voters and their interests. Trump has doubled down on his base again and again, alienating the rest of the country, with little apparent concern. Trump barely makes even rhetorical concessions to those who did not vote for him. He routinely uses explosive, derisive language for people and parts of the country who dislike him.

If Trump retreats to familiar, controversial themes like immigration, Islam, crime, and so on, then he is once again pursuing the base-mobilisation strategy pursued by Karl Rove, the famed campaign analyst of George W. Bush’s presidency. Rove argued that rather than campaigning toward the centre, where lots of centrist, median voters were waiting to be won over, Bush could win by turning out huge numbers of conservative voters. This strategy worked, but only just. Bush scraped into a second term, and Trump only won the presidency through the unique American constitutional artefact of the Electoral College. If Trump speaks only to his voters next Tuesday, then that is a strong signal that he is betting on another Electoral College (and not popular vote) victory this year.

Trump has marketed himself as a master negotiator and wheeler-dealer. He has devoted a fair amount of effort cultivating the impression of a breakthrough with China on trade, and with North Korea on nuclear missiles. Both of these claims are specious. The “phase one” trade deal with China won nothing new, and North Korea has surrendered no missiles or warheads, nor made any other serious concessions. This will not matter to Trump, of course. Both negotiations will be pitched as successes.

The Middle East and Iran are trickier. Having wrecked the nuclear deal President Barack Obama negotiated with Iran, Trump has pushed Iran arguably closer to weaponizing nuclear power than when he first took office. Trump will elide this fact and pitch the killings of Iranian general Qasem Soleimani and ISIS leader Abu Bakr al-Baghdadi as Middle East breakthroughs. He will also throw red meat to his Christian Zionist supporters by hyping his support for Israel and its right-wing government.

Beyond this, he will say little on foreign policy, as it moves election-year politics far less. Although since it is Trump, there will be lots of bragging about making America respected in the world again.

One big issue which will not be covered but should be

The deficit. Trump loves to take credit for a roaring economy. Indeed, unemployment is low and the stock market is up. These are Trump’s two favourite benchmarks. But these are somewhat artificial successes, because Trump is borrowing hugely to fund this prosperity. The deficit is around $1 trillion, which is 20–25% of the entire federal budget and around 4% of GDP. This is exorbitant Keynesian pump-priming, particularly in a boom period of the business cycle, when the government is supposed to run a surplus to pay down past debt and create fiscal space to combat the next business-cycle downturn. Indeed, if this flood of red ink had not produced a boom, that would be the more remarkable outcome of Trump’s debt-fuelled economics.

State of the Union speeches are traditionally rather dull affairs. Trump is nothing if not dull. A State of the Union during an impeachment is a rarity, and with a president like Trump, it will genuinely be unique. This one will likely be memorable for all the wrong reasons.

To help alleviate the pain, here are all the State of the Union drinking games Americans have come up with over the years.

Show Comments
Previous Article
Coronavirus: One step forward, one step back for the global economy
Next Article
The Bougainville referendum: Celebrations turn to sadness and hope