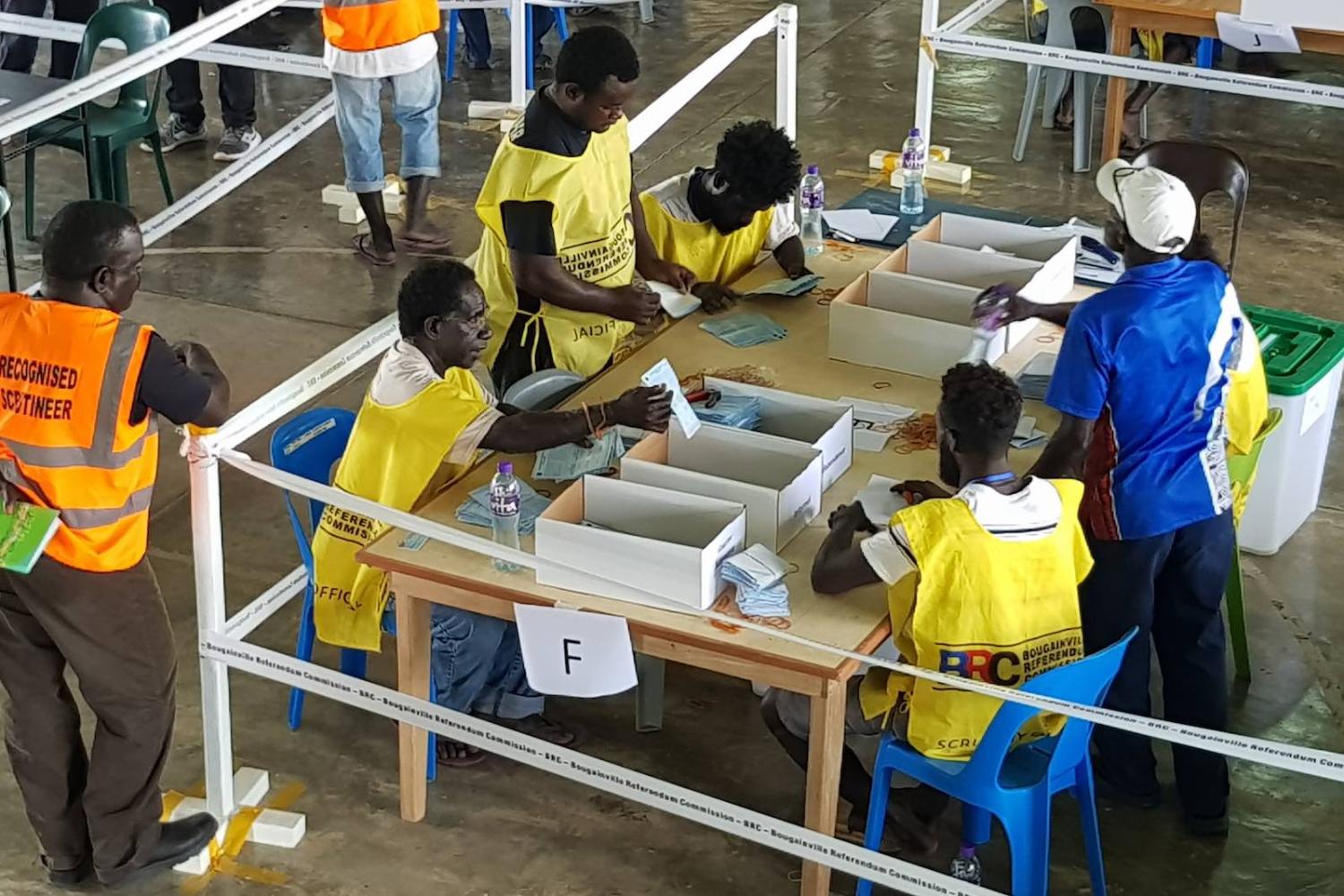 In a referendum to decide on a future political relationship with Papua New Guinea, a 97.7% majority of Bougainvillean voters have chosen independence. The referendum voting process is now formally closed. A 40-day petition period passed without any complaint lodged, and international observer groups declared the referendum credible, transparent, and inclusive. The Bougainville referendum was also witnessed as a celebratory event – defying fears of renewed hostilities.

A two-part question commonly asked of those of us closely following the Bougainville referendum is whether the PNG government is likely to obstruct the result, and if so, will there be a return to violence? Answers to both questions are, of course, highly speculative, and focus on an extreme outcome. It might instead be more productive to reflect on the more subtle emotional responses to the referendum among both Bougainvilleans and those from other parts of PNG.

My concern is just after the voting. When the Bougainville referendum results, when the raw data goes to the Governor General, the PNG government, what will they say, what will they do about that data? Are they going to grant us with independence or greater autonomy? That is my big concern. Because anything might happen if the result doesn’t go the way people want.

The Bougainville Peace Agreement, which stipulates the rules governing the referendum, now requires a period of consultation between the two governments on implementation of the result. The process has no timeframe and could take months, or even years. If an agreement is reached, the result can be referred to the national parliament for ratification. Yet in the event of disagreement, Bougainville’s existing autonomy arrangements under the powers of the Bougainville Peace Agreement will continue.

The landslide vote is said to have sent “shockwaves” through the PNG government, which expected a larger vote in favour of greater autonomy. In response to the referendum result, Prime Minister James Marape said that he acknowledged the wish of Bougainvilleans to separate from PNG and that his government has heard their voices.

Following announcement of the referendum result, it was common to hear expressions of sadness by people from other PNG provinces.

Yet, indicative of his preference that Bougainville remain a part of the PNG nation, Marape asked Bougainvilleans to consider a “middle” or “third” way focused on “economic independence” that responds to their desire for self-rule, yet falls short of full independence. Some rightly argue that Marape’s push for a middle way has come too late, while others maintain that any compromise on independence is not what the people voted for.

Following announcement of the referendum result, it was common to hear expressions of sadness by people from other PNG provinces. It has long been argued that an independent Bougainville could prompt other provinces to also pursue self-government. Others are more simply saddened by the potential loss of PNG’s relationship to Bougainville’s cultures and the people-people connections.

While sharing in the sadness of this potential change in the relationship, Bougainville is regarded as a “special case” historically, in comparison to other PNG provinces that might attempt succession. As Augusta Ariku, a university student from Bougainville observed:

I actually feel sad too, but then, in the crisis, a lot of people died. And the forefathers. It was in 1974, before PNG even got independence, the forefathers, they declared independence by raising the Bougainville flag. So it is, yeah, like we are fulfilling their dream.

The desire for independence is also not seen as the end of the cultural and personal relationships forged between Bougainville and PNG since PNG’s independence. A Bougainvillean university student, Anthony Siniku, shares this response to his classmates:

I usually hear when people would say, “Why are you guys trying to leave us, to break out from PNG? It’s very sad for you guys to leave us, for you Bougainvilleans to leave us.” That’s what some of the students usually say. What I usually say towards that is that we are not changing anything – we are still Melanesian – the bond we have will still remain.

Underpinning the long, impending negotiations between the two governments, appears to be a sense of sadness and hope – the potential loss of Bougainville from the vibrant and diverse nation of PNG and the optimism of long sought-after independent Bougainville.

These emotions are more nuanced than the emphasis on a hypothetical blocked result by the national parliament, and subsequent (potential) return to violence. While less extreme, sadness and hope might be more illustrative of public sentiment forming the backdrop of the high-level negotiations.

Previous Article
Trump’s State of the Union: A preview
Next Article
As Hong Kong wards off coronavirus, authorities struggle to win trust

The Prime Minister will need to field awkward questions on his US trip this week.
Sam Roggeveen 12 Dec 2019 09:00