Ankara and Moscow are in an unusual power play where the Kremlin turns a blind eye to actions that aid its adversaries. 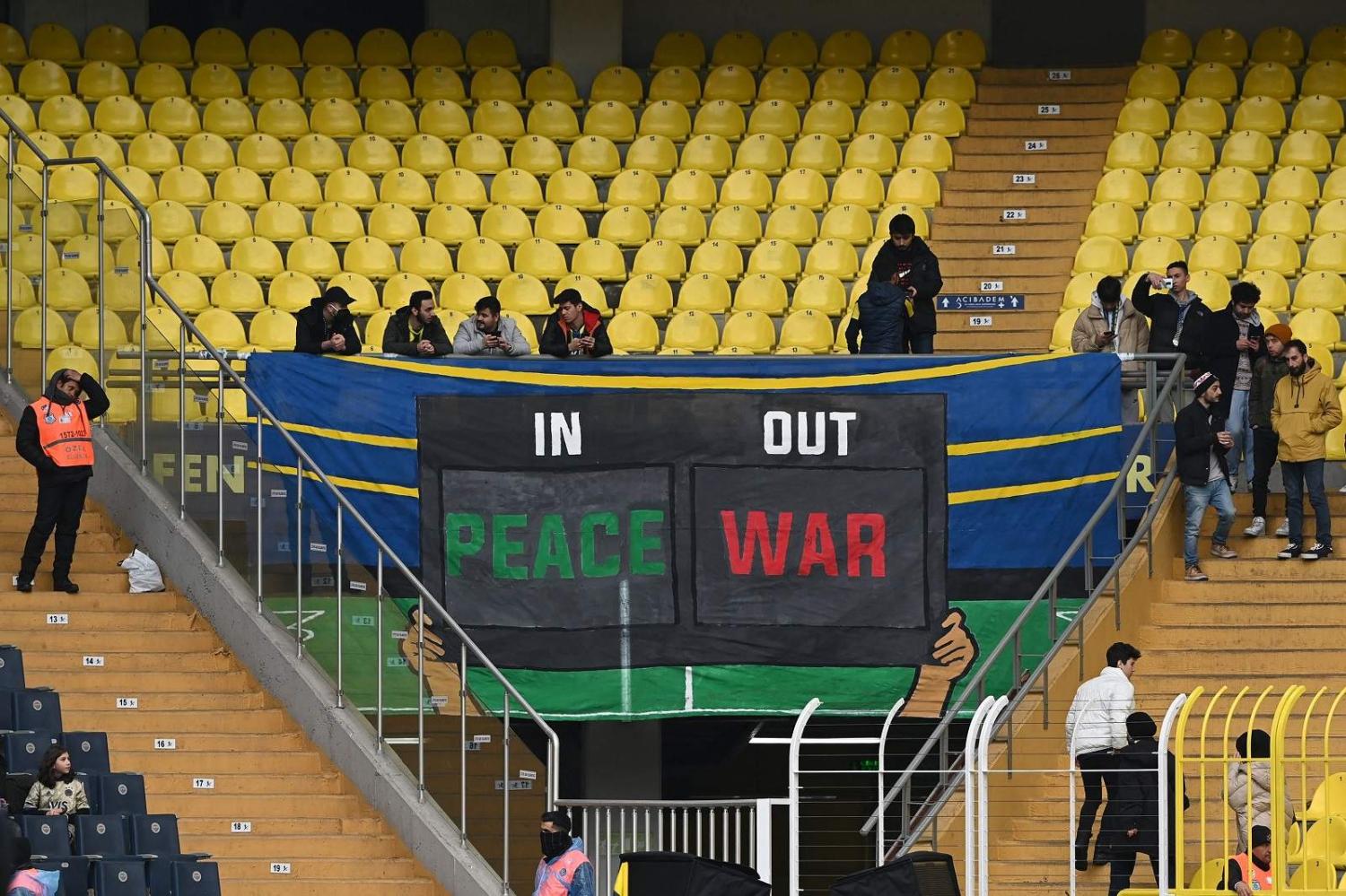 Fans at the Global Tour for Peace charity football match between Fenerbahçe and Shakhtar Donetsk to raise funds for Ukraine, in Istanbul, 19 April 2022 (Ozan Kose/AFP via Getty Images)
Published 9 May 2022     Follow @nikola_mikovic

Russia’s current military fiasco in Ukraine could have a serious impact on Moscow’s position in Syria. A decision by Turkey to close its airspace to Russian planes flying to the Middle Eastern country is expected to affect Russian military capabilities in war-torn Ukraine, although such a move is unlikely to jeopardise relations between Moscow and Ankara.

After Turkey blocked the Black Sea passage for Russian naval vessels on 28 February, Russia did not take any retaliatory action. So it is not surprising that the Kremlin’s response to Ankara’s most recent move was also rather subdued. “Moscow understands Ankara’s decision to close Turkish airspace to Russian planes flying to Syria,” said Maria Zakharova, the official representative of the Russian Ministry of Foreign Affairs. Semyon Bagdasarov, a Russian Middle East expert who is also a member of the Russian parliament, emphasised that it was only a matter of time before the United States would have pressured Ankara to impose such restrictions.

Turkey presumably seeks to benefit from Moscow’s unfavourable geopolitical position and secure some of its interests in Syria.

In order to continue supplying its troops in Syria, Russian planes will now have to fly through Iranian and Iraqi airspace. There are, however, fears in Russia that the longer its so-called special military operation in Ukraine lasts, the more pressure the West will put on those countries that are interested in continuing their cooperation with Moscow. It is entirely possible that the United States and its allies will eventually pressure Baghdad to close its airspace to Russian planes. In such a case, Russian troops in Syria would be completely isolated.

That seems to be one of the reasons why Alexey Malashenko, an expert at the Moscow-based Institute of World Economy and International Relations, recently said that if another Arab Spring-style uprising breaks out in Syria, the Kremlin will most likely have to withdraw Russian troops from the Middle Eastern nation. Indeed, without stable supply lines, and with the ongoing invasion of Ukraine, Russia is unlikely to have the appetite to provide the same level of support to the Syrian Arab Army as it did during the most active stage of the Syrian Civil War.

Turkey presumably seeks to benefit from Moscow’s unfavourable geopolitical position and secure some of its interests in Syria. Konstantin Sivkov, the Deputy President of the Russian Academy of Rocket and Artillery Sciences, believes that Ankara is “trying to encircle the Russian military bases in Khmeimim and Latakia as much as possible”.

Yet Turkey appears to be hedging its bets. To date, Ankara has refused to join anti-Russian sanctions, and is reportedly seeking to purchase Russian Su-57 jets instead of upgraded American F-16 fighters. At the same time, Turkish authorities are aiming to attract more Russian tourists this summer. The very fact that Russia recently increased the number of flights to Turkey suggests that the Kremlin does not intend to spoil its relations with Ankara either.

Moreover, Moscow seems to indirectly support some of Turkey’s actions in Syria. For instance, in an interview with Turkish daily newspaper Aydınlık, Yevgeny Prigozhin – alleged to be the owner of paramilitary organisation Wagner Group and to have close links to Russian President Vladimir Putin and Russia’s Defence Ministry – called Ankara’s attacks on Kurdish guerillas in Iraq and Syria “a holy war of the Turkish army”. Previously, Putin has thanked Turkish President Recep Tayyip Erdoğan for facilitating the prisoner exchange between Russia and the United States, which suggests that Ankara will likely continue playing the role of mediator not only between Russia and Ukraine, but also between the Kremlin and the White House.

Isolated from the West, and alone in its military adventure in Ukraine, Moscow does not seem to have too much room for political manoeuvres vis-à-vis Turkey.

The problem for the Kremlin, however, is that Ankara seeks to exploit the political and military weaknesses that Russia has demonstrated in Ukraine, and increase its influence not only in Syria, but also in other regions that are still in Moscow’s zone of influence. While Russia remains preoccupied with the war in Ukraine, Turkey plans to normalise relations with Armenia – the Kremlin’s ally in the Russian-dominated Collective Security Treaty Organization (CSTO). At the same time, Ankara is actively building up military cooperation with several Central Asian nations that are still in Russia’s geopolitical orbit.

On 22 April, Turkish and Tajikistani defence ministers signed a framework agreement on military cooperation between the two countries. Tajikistan, which is also a Russian ally in the CSTO, is reported to have recently purchased a Turkish-made Bayraktar drone, while neighbouring Kyrgyzstan – yet another of Moscow’s allies – has already bought sophisticated unmanned combat aerial vehicles from Ankara. More importantly, Turkey continues to provide Bayraktar drones to Ukraine, and the Kremlin turns a blind eye to such actions.

Isolated from the West, and alone in its military adventure in Ukraine, Moscow does not seem to have too much room for political manoeuvres vis-à-vis Turkey. That is why the Kremlin aims to preserve its situational partnership with Ankara, even though in the long term Turkish decisions to curb passage of Russian vessels through the Dardanelles and Bosphorus straits, and to close its airspace to Russian planes flying to Syria, could have an impact on the position of Moscow’s client – Syrian President Bashar al-Assad.

Previous Article
The time is right for Australia to forge stronger ties with Europe
Next Article
Chinese bases in the Pacific: A reality check

An Australia-America-Pacific partnership – for and with the region

Support through consensus and the shared Pacific value system will ensure island nations get what they need most.